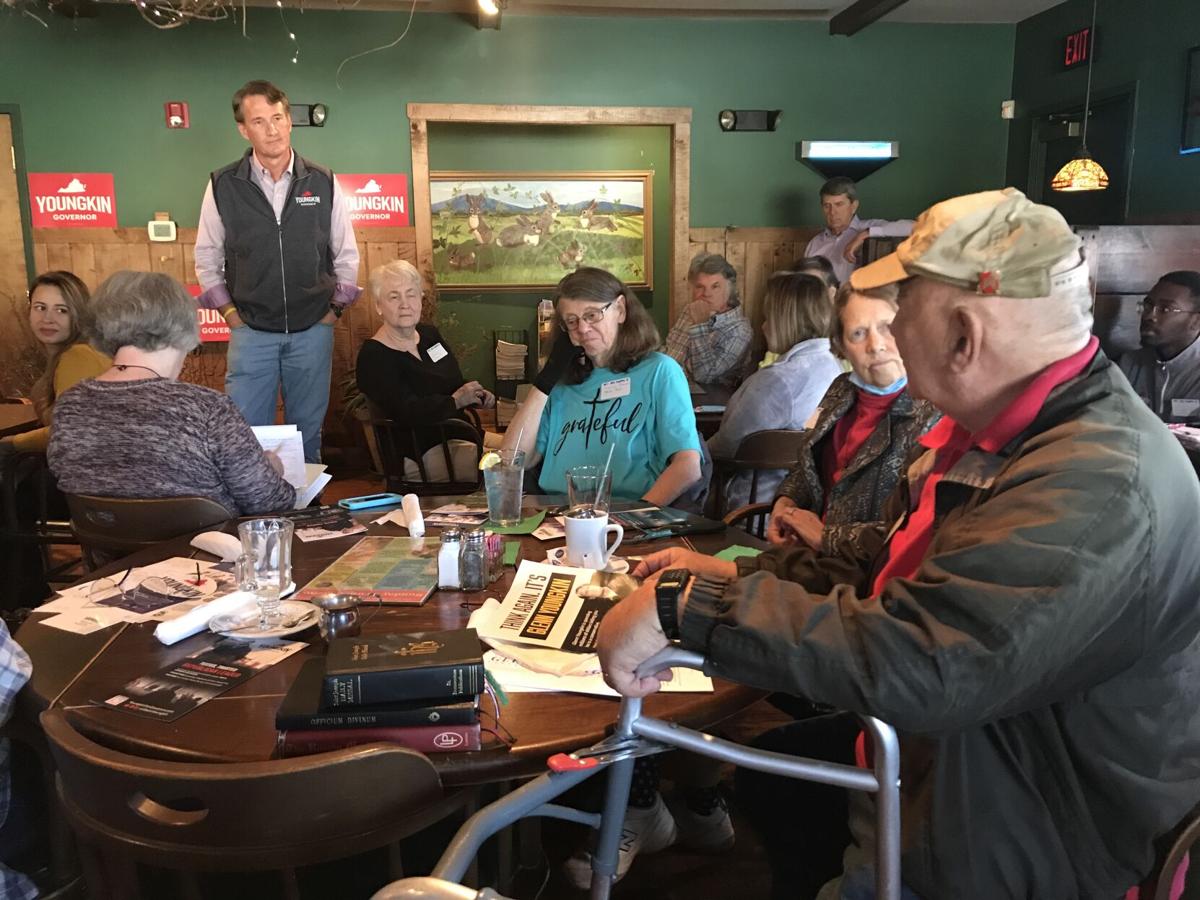 Republican gubernatorial candidate Glenn Youngkin (standing, left) listens to a question from veteran Edward C. Olivares (far right) during a morning meet-and-greet on Saturday at The Briar Patch in Amherst. 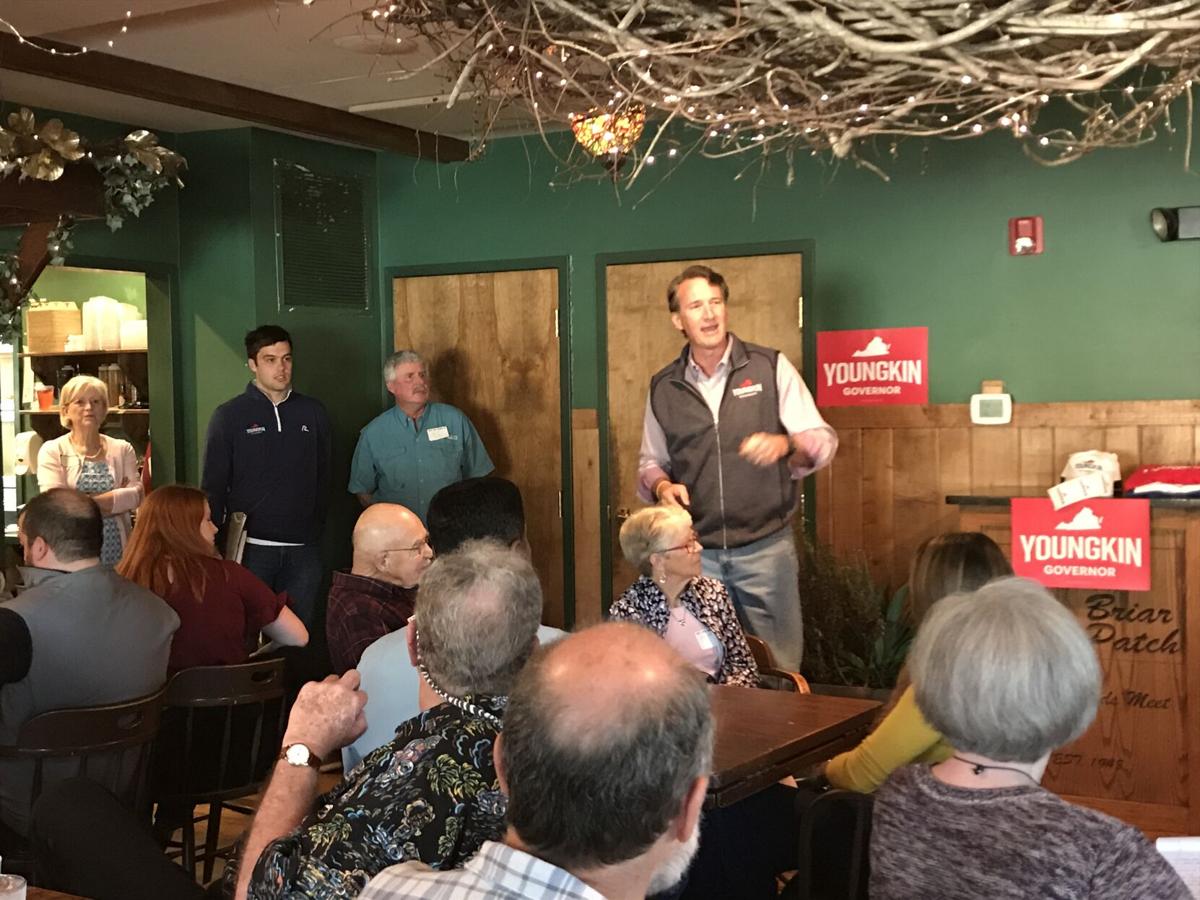 Gubernatorial candidate Glenn Youngkin addresses the crowd at The Briar Patch in Amherst on Saturday. 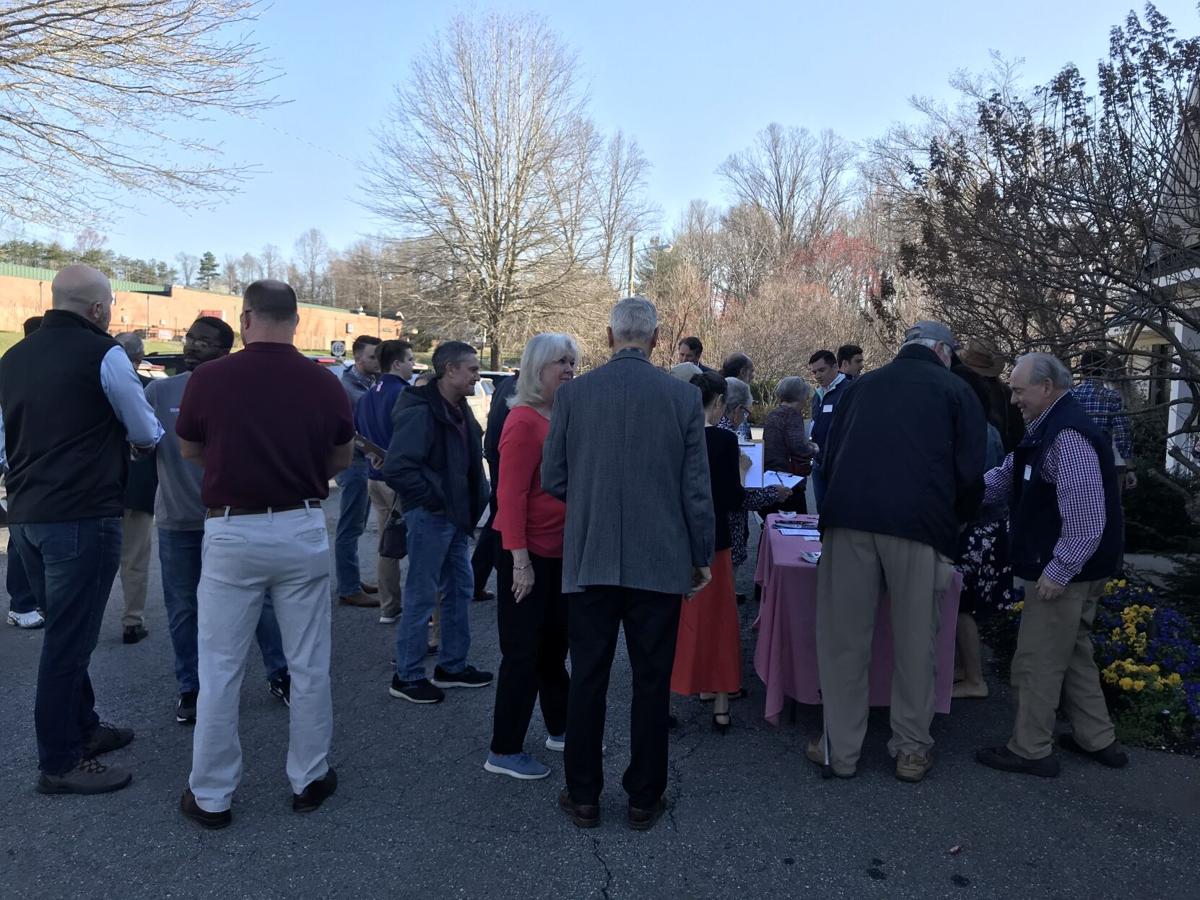 Dozens gather outside The Briar Patch in Amherst County at a breakfast meet-and-greet for gubernatorial candidate Glenn Youngkin on Saturday.

Republican gubernatorial candidate and Virginia native Glenn Youngkin made a pit stop Saturday morning in Amherst County, where he took aim at Democrats and left-leaning policies and said he wants to use his experience as a business executive to “reinvigorate, rebuild, reestablish” the state.

“We do not recognize this great commonwealth today. She is in the ditch ... Democrats drove her into the ditch and they have been piling dirt on her every chance they get,” Youngkin said.

Servers delivered plates of eggs, waffles and bacon to the packed house at The Briar Patch as dozens of residents and officials from both Amherst and Nelson counties gathered to hear from Youngkin as he spoke on issues ranging from economic growth, reopening Virginia schools, attracting families, vaccines, broadband and election security.

“We’re going to stand up for our constitutional rights like you have never seen, because they have been trampled like you’ve never seen,” Youngkin said.

Youngkin, a political newcomer and former co-CEO of private equity company The Carlyle Group, is one of several seven candidates competing for the Republican Party nomination in May.

Five Democrats also seek their party’s nomination for governor ahead of the November general election.

Youngkin said he hopes to have a GOP sweep of the governor, lieutenant governor and attorney general seats, all of which are on the ballot this year. He also has plans to take back six delegate seats and reclaim the House of Delegates.

“I will not have a lonely victory in November,” Youngkin said.

While the Amherst County Republican Committee is not able to endorse a candidate until after the nomination, committee Chair Vance Wilkins said in an interview with The News & Advance he personally supports Youngkin. He said he feels Republicans “have a fair chance” of taking the election this November.

“What [Youngkin] had to say is right in line with what I feel very strongly about. What I really like most is his commitment to long-term programs,” Wilkins said.

Youngkin outlined a five-point plan which he believes will “reestablish our faith in our election process and its results,” calling the idea of election security a bipartisan issue at the root of democracy.

He said those steps are to make the Department of Elections more transparent; routinely update voter information; require a state-issued ID to vote; require providing proof of citizenship to receive a mail-in ballot and requiring a witness’ signature for such ballots; and an audit process for voting machines, with the results being made public.

Wilkins said the issue of voter fraud — a concept that dominated the 2020 presidential election cycle after repeated claims from former President Donald Trump but failed to gain traction in various court proceedings — is something that was “important as hell to me” come November.

Wilkins said other Republican candidates for various seats, including Pete Snyder who also is eyeing the convention nod for governor, have visited Amherst County as well. Snyder visited the county roughly a week ago, Wilkins said.

Veteran Edward C. Olivares said going into that morning there were three candidates on his list for governor: Sergio de la Peña, a retired Army Colonel and Trump administration appointee; Snyder, an entrepreneur; and Youngkin.

“What I’ve heard you say right this morning has convinced me that you are number one on my list at the present time,” Olivares told Youngkin during the question-and-answer portion of the breakfast.

Youngkin did not take questions from the media.

Lynchburg City Council has again voted to maintain its current real estate property tax rate, one that could have some residents facing higher…

With the area’s vaccination rollout underway, and city restaurants and venues loosening restrictions, a staff report to Lynchburg City Council…

Campbell County is looking toward a plan to deliver fiber broadband to area homes, a multimillion-dollar endeavor that could bring internet access to the most remote areas of the county.

Bedford County residents’ tax rates are set to remain the same for the upcoming budget.

Tommy Harvey is hoping to hold onto the North District seat he has held since 1984; he'll be challenged by Afton resident and former Nelson County School Board member Mary Cunningham.

The Town of Amherst’s proposed fiscal year 2022 budget of $3.6 million, despite lower revenues than in past years, does not contain any recomm…

Republican gubernatorial candidate Glenn Youngkin (standing, left) listens to a question from veteran Edward C. Olivares (far right) during a morning meet-and-greet on Saturday at The Briar Patch in Amherst.

Gubernatorial candidate Glenn Youngkin addresses the crowd at The Briar Patch in Amherst on Saturday.

Dozens gather outside The Briar Patch in Amherst County at a breakfast meet-and-greet for gubernatorial candidate Glenn Youngkin on Saturday.