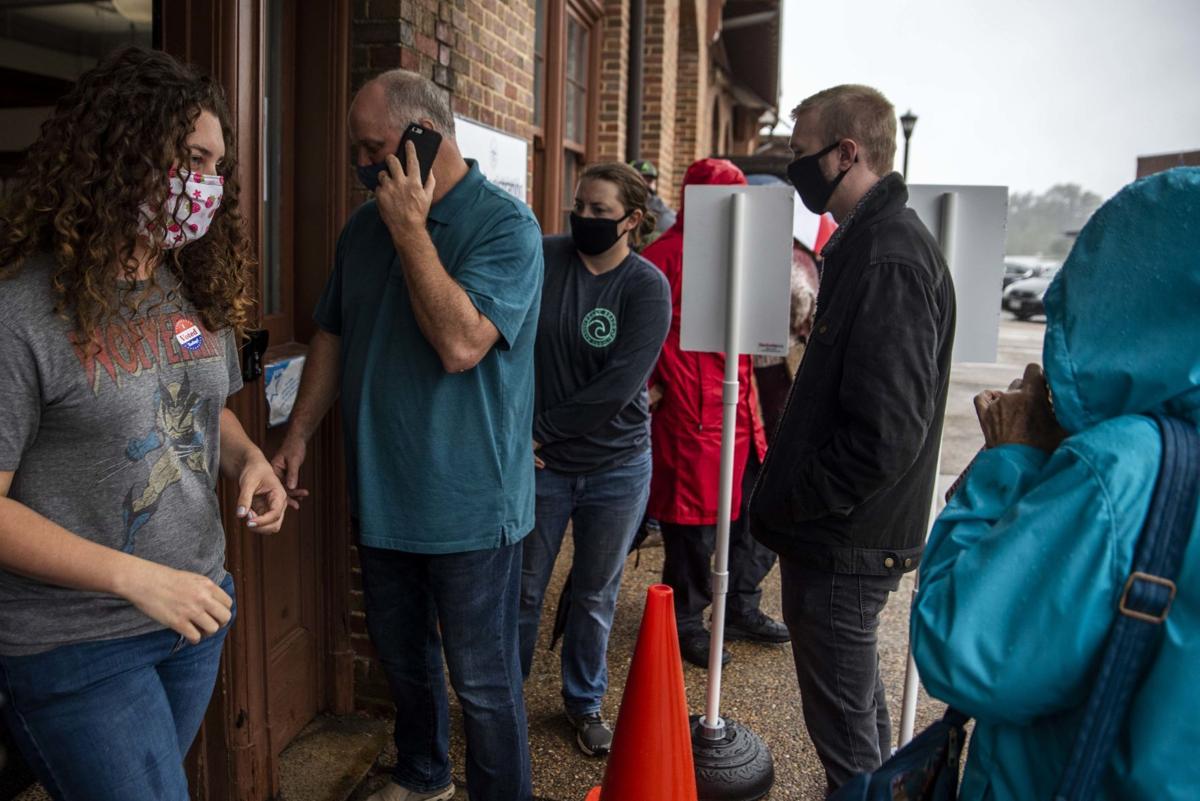 Voters crowd under the awning while waiting to vote at the Lynchburg Registrar's Office to escape the rain that came as a result of the remnants of Tropical Storm Zeta on Thursday, Oct. 29, 2020. 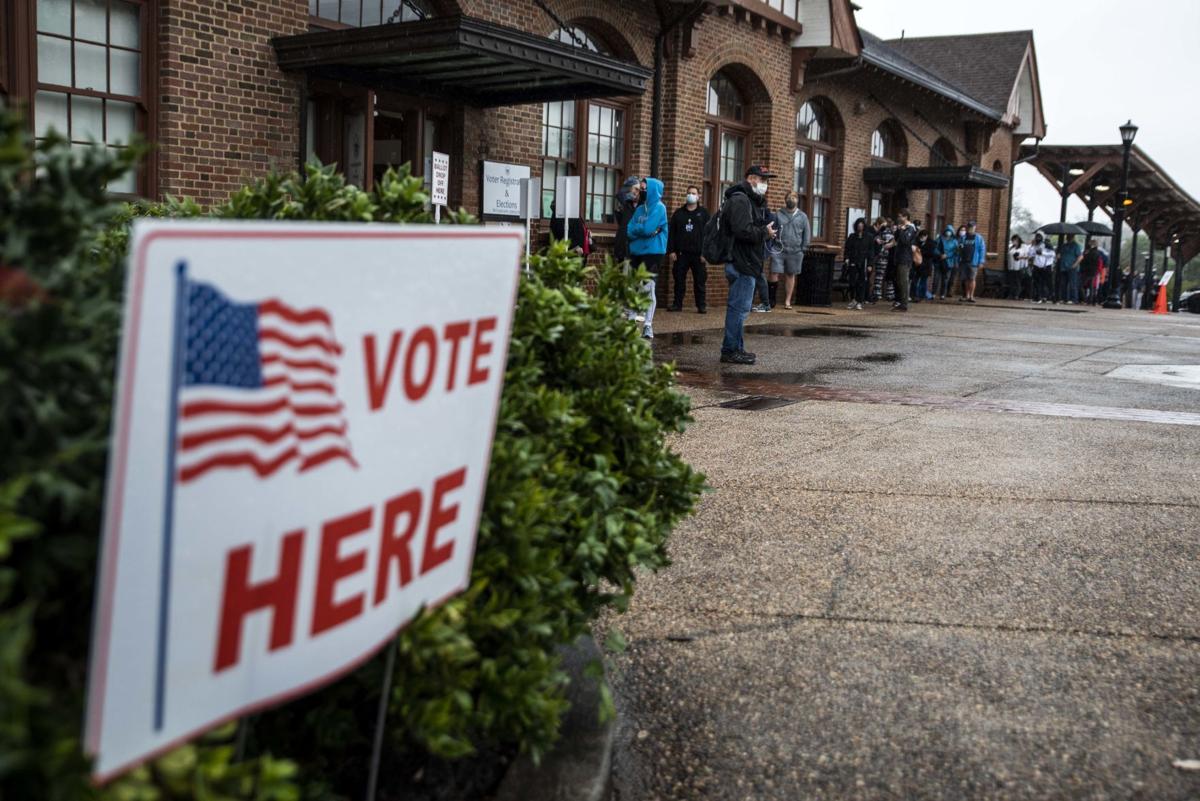 Lynchburg residents wait in the rain that comes as a result of the remnants of Hurricane Zeta to vote at the Lynchburg Registrar's Office on Thursday, Oct. 29, 2020. 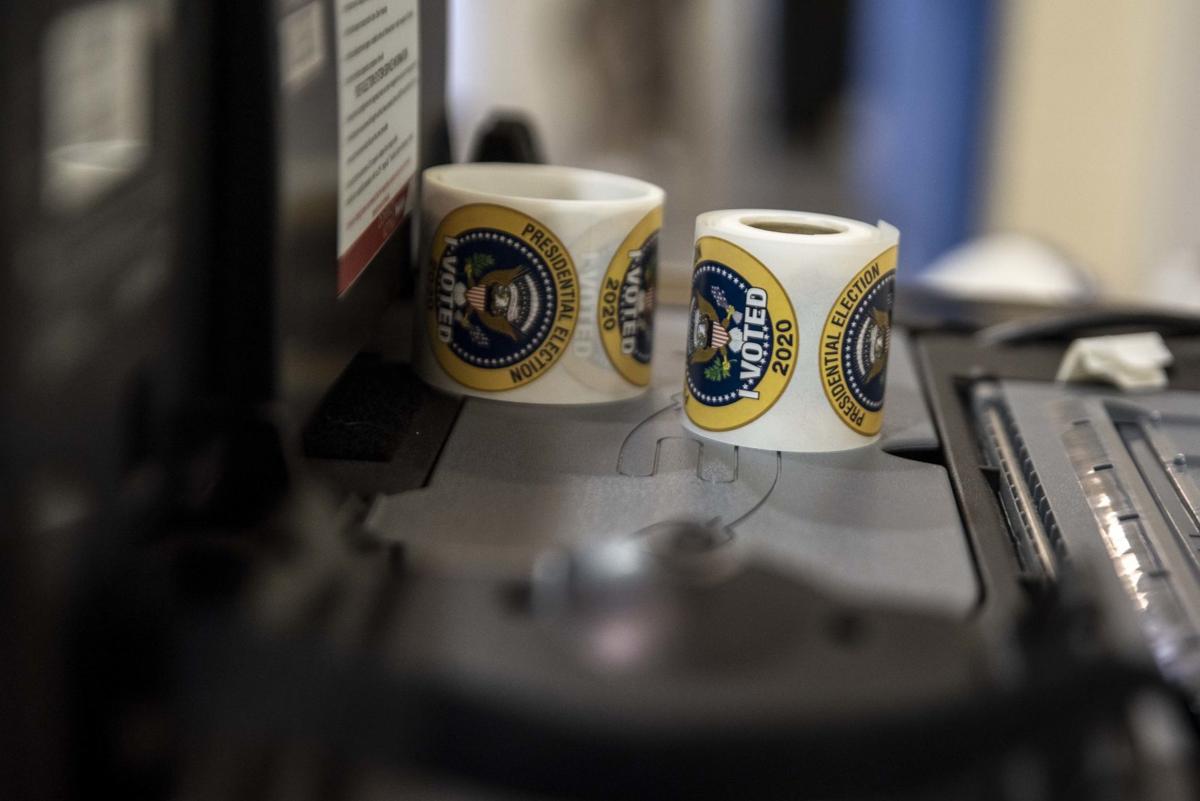 Rolls of "I Voted" stickers sit on the polling machine the Bedford County Gym on Wednesday, Oct. 29, 2020.

For Matthew Gillett, a junior at the University of Lynchburg, this election year is different.

While it’s not the first time the political science major has voted in an election, it is the first time he’s voted for a presidential candidate. Gillett said he voted in the 2018 midterm election and has always followed politics, but voting in the 2020 election, albeit absentee and not in person, felt gratifying.

“I felt like to actually have my voice heard this year was something very special,” Gillett said.

In the midst of an especially polarizing election year, area teachers, professors and student organizations are working to ensure first-time voters in high school and college are registered, informed and casting their ballots.

Gillett serves as the president of the University of Lynchburg Democrats, a student organization that works to connect college students to Democratic candidates and campaigns. This year, he said, the organization hosted socially distanced watch parties and discussions and partnered with the university’s Center for Community Engagement to hold a voter registration drive on campus in October.

“We talked to a lot of students outside our student center and made [sure] we stayed safe while getting these resources to students,” Gillett said.

The University of Lynchburg athletic department also encouraged members of athletic teams at the university to register and vote this year.

At Sweet Briar College, a private women’s college in Amherst County, this election year has a special significance — 2020 marks the 100th anniversary of the passage of the 19th Amendment, which guarantees and protects women’s constitutional right to vote.

The landmark year compelled students on campus to hold a voter registration event in August, according to college spokesperson Dana Poleski. Organized by the college’s Young Democrats and College Republicans, the event resulted in 13 new voter registrations and 20 requests for absentee ballots.

Poleski said the college has been running a social media campaign encouraging its students and the greater college community to vote in this year’s election. In short videos posted to the college’s Instagram account, students, faculty and staff are featured sharing why they think voting is important.

In the classroom, Jeffrey Key, associate professor of political science at Sweet Briar College, said he has encouraged his students to vote since he came to the college in 1990.

Key said he’s happy to be teaching his U.S. government class this semester, as the election has allowed for great discussions and debates among students.

“I’ve seen more engagement this election than any previous election,” Key said. “There were a lot of people who voted in 2016, there was a lot of energy in the classroom, but this time is probably double that.”

He attributes that shift to the increase in social media engagement and polarization around this election.

At Randolph College, political science professor Aaron Shreve said faculty had to reimagine how to get students engaged in the election season this year. Randolph College has been operating in an entirely remote format this semester, so no students and few staff members are on campus.

Instead of typical voter registration drives and watch parties on campus, Shreve said students have been engaging with one another in their online classes, sharing photos of themselves dropping off their mail-in ballot or wearing their “I Voted” stickers.

The college’s library put together an elections and voting resource guide to help students learn about voting procedures, deadlines and races.

While colleges focus their efforts on ensuring students have a plan to vote absentee, Lynchburg-area high school social studies and government teachers are working to help 18-year-old seniors ready to vote, typically in person.

In an average graduating class of about 290-360 seniors, Rawls-Fanning said about 90% of them are 18 or will be by the November election.

Rawls-Fanning said about 70% of her 46 senior students this semester are eligible to vote in this election. Of those, more than half have told her they have already voted by mail or in person, and many have plans to vote, she said.

“They are highly motivated and ready to vote for the first time,” Rawls-Fanning said.

Michael Nagy, social studies chair at Rustburg High School, said he spends weeks every election season teaching students about each race that will be on the ballot.

“I might hit it harder than I need to, but we usually spend at least two days going over each race,” Nagy said.

Nagy said he strives to get his students as educated as possible, especially since they’re voting for the first time.

“Hopefully if they get kind of jazzed up that first time, it’ll stick with them and they’ll make it a habit,” Nagy said. “If they’re turned off that first year or they’re not informed or they’re not seeing adults excited about voting, they’re just going to get turned off by the whole process.”

Hubble said he and his colleagues register students to vote every year, whether it’s a presidential election year or not and whether they’re 18 yet or not.

“Generally students are very excited to vote for the first time, especially when it’s a presidential election year,” Hubble said. “There’s pride in their eyes, and that’s nice to see.”

Hubble said he focuses on keeping that excitement going by helping his students stay informed about political processes and even holding mock campaigns in class. He also encourages his students to volunteer at polls and engage with politics locally.

“Keeping them excited and not letting them get overwhelmed by how confusing politics can be sometimes is an important part of it,” Hubble said.

“These students are paying attention,” Hubble said. “They’re forming opinions and having discussions, and they want to be active citizens and have their voice heard.”

The Bedford County Board of Supervisors and county staff began preliminary discussions on budget priorities and goals for the new fiscal year in a work session Monday.

After postponing a vote during last week’s meeting, Bedford Town Council on Tuesday voted 5-2 to deny a conditional use permit request for a p…

Voters crowd under the awning while waiting to vote at the Lynchburg Registrar's Office to escape the rain that came as a result of the remnants of Tropical Storm Zeta on Thursday, Oct. 29, 2020.

Lynchburg residents wait in the rain that comes as a result of the remnants of Hurricane Zeta to vote at the Lynchburg Registrar's Office on Thursday, Oct. 29, 2020.

Rolls of "I Voted" stickers sit on the polling machine the Bedford County Gym on Wednesday, Oct. 29, 2020.