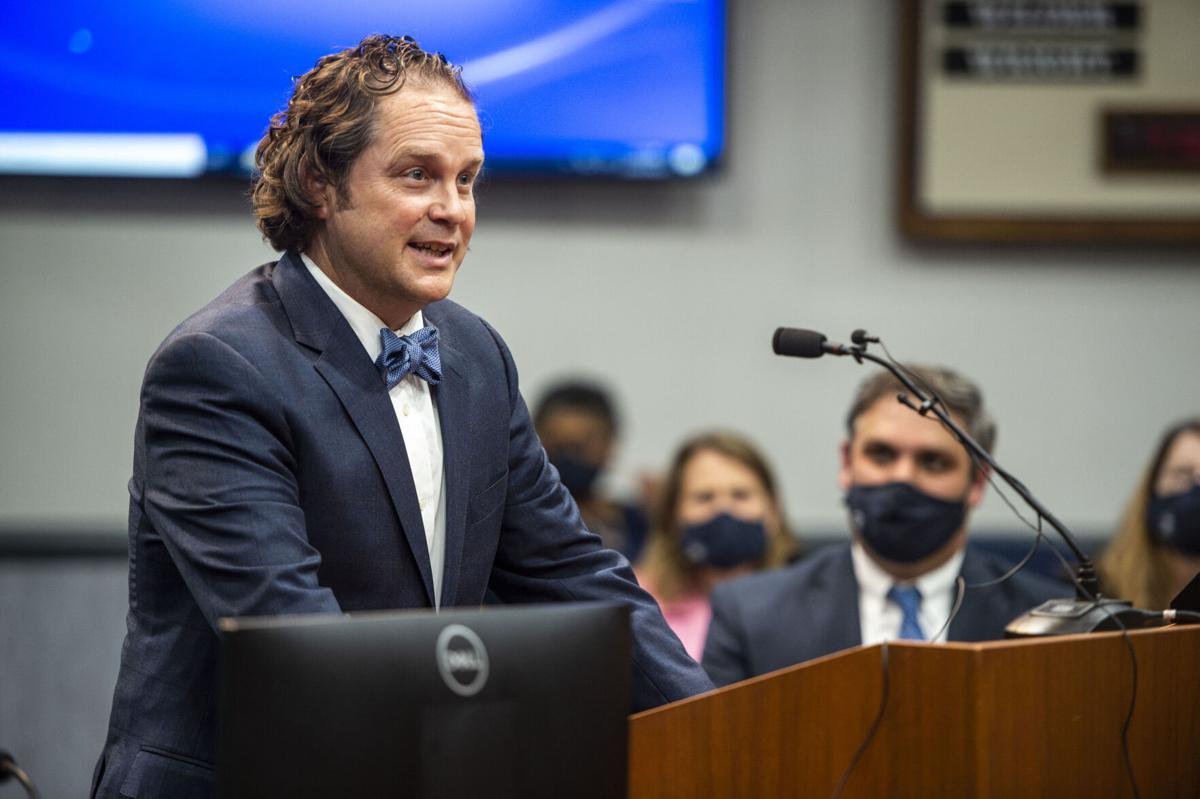 Wynter Benda speaks before city council after being appointed the new Lynchburg city manager during a meeting Tuesday. 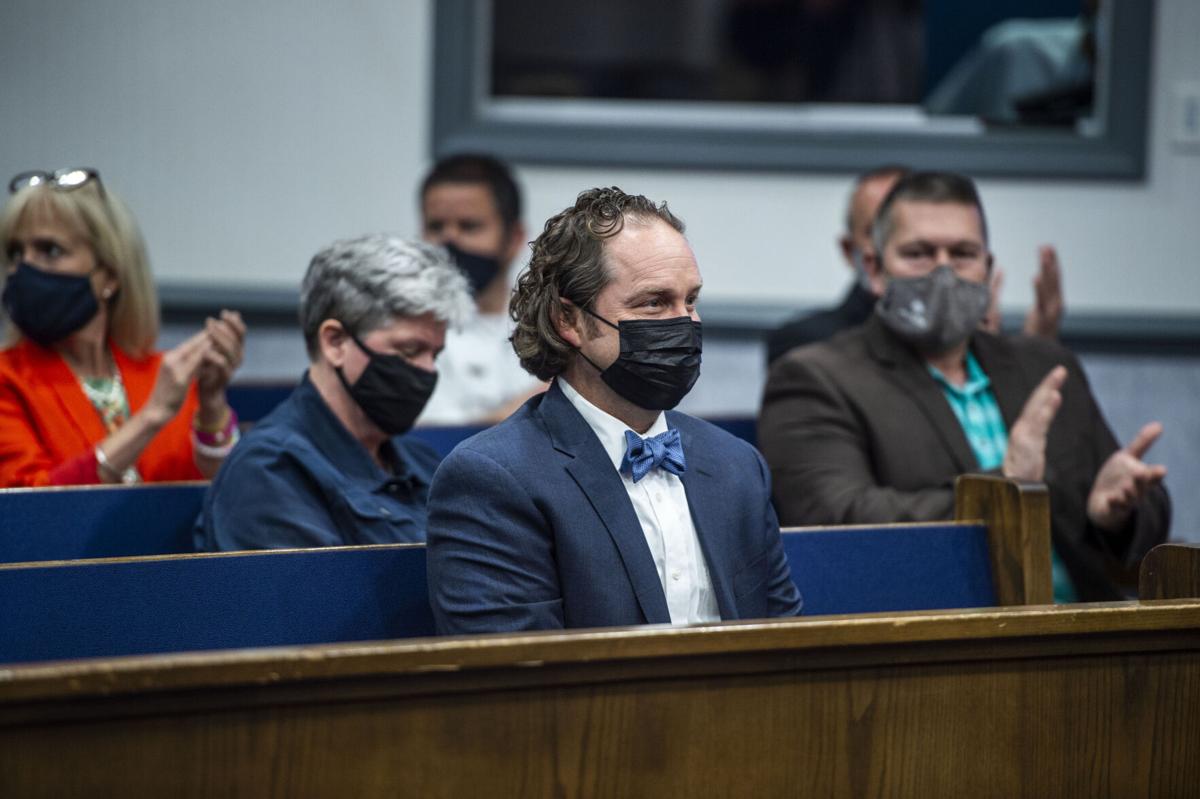 Members of the audience clap as Wynter Benda is appointed the new Lynchburg city manager by city council during a meeting Tuesday. 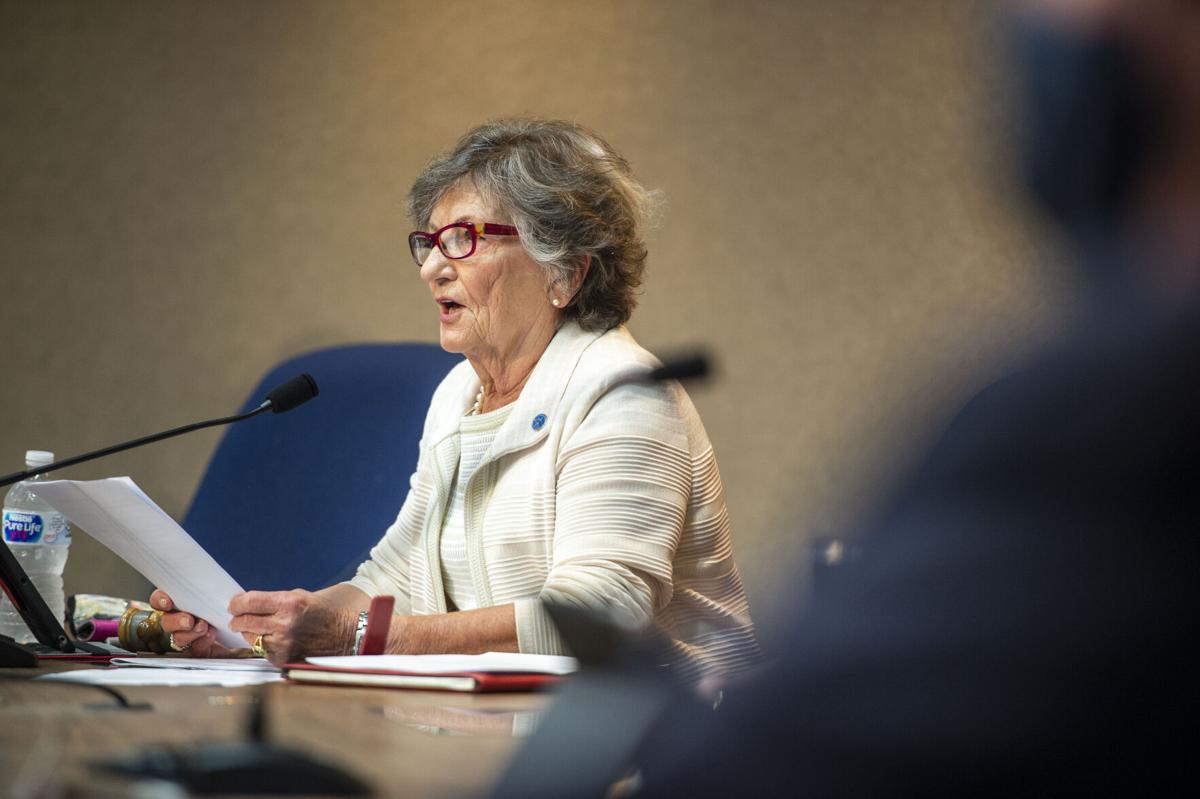 Lynchburg Mayor MaryJane Dolan speaks on behalf of Benda before he is appointed the new city manager.

For the second time, the nationwide search for a new Lynchburg city manager that began early last year has reached an apparent end.

City council unanimously adopted a resolution appointing Benda to the position, effective Aug. 4, ending a search that has stretched almost a year and a half.

“Lynchburg has a momentum that is amazing, as far as what I have seen,” said Benda following the council appointment. “It’s just, in my opinion, one of those places within the commonwealth that is going places. And so I wanted to be a part of it, and do what I can to help out, any way I can.”

He began his career in the City Manager’s Office as assistant to the city manager, where he worked across multiple city departments. He also served as the senior assistant city attorney for the city of Hampton, the in-house council for the Chesapeake Treasurer’s Office and served as a judicial law clerk for the 7th Judicial Circuit in Newport News.

Lynchburg Mayor MaryJane Dolan said city council is looking forward to working with Benda and believes he is the right person for the position.

“This vote is the culmination of an extensive nationwide search,” Dolan said in a statement Tuesday evening.

“We can confidently say that Fahrenheit Advisors’ Managing Director, Sheila Hill-Christian, and team did a thorough job in recruiting and vetting the many candidates. Wynter rose to the top because of his wealth of knowledge, years of public service experience and his zest for service.”

The search began in February 2020 after former City Manager Bonnie Svrcek announced her retirement and council endorsed plans to conduct a nationwide search. The city signed a contract with a search firm, Texas-based Strategic Government Resources, in March 2020.

That relationship with the firm resulted in identifying and hiring a city manager Aug. 11, only to have him resign Aug. 21, one week before the job was to begin. His sudden resignation followed the circulation of emails allegedly sent by him during his time as Warren County administrator, a few of which contained vulgar language offensive enough for council to consider it grounds not to hire him.

In December, the city selected a new consulting firm to spearhead the effort, Fahrenheit Advisors, a Richmond-based consulting and advisory firm the city had worked with in the past, which ultimately led to the selection of Benda.

When asked about the first failed search, Benda said he can’t speak to that process, but said he found his process with Fahrenheit to be “fantastic,” and that it gave both him and city leadership the opportunity to get to know one another.

Under Lynchburg’s charter, the city manager is the top-ranking administrator in the Hill City. Like other Virginia cities with council-manager systems, Lynchburg’s city manager is tasked with running the day-to-day business of government and submitting policy recommendations to city council.

In his first 100 days, Benda said he plans to “do a lot of listening,” and work to better understand the vision of Lynchburg, where its headed and what the city priorities are in order to keep up the city’s “momentum.”

According to the news release, Benda was charged with overseeing several major economic development projects in his role within the city of Norfolk. These projects included negotiating a 30-year extension through 2060 of an existing water agreement with Virginia Beach valued at $250 million, finalizing a $30 million land sale agreement with Hampton Roads Sanitation District for the expansion of the Sustainable Water Initiative for Tomorrow onto Lambert’s Point Golf Course and spearheading a partnership with the Downtown Norfolk Council to establish Selden Market — Norfolk’s first retail incubator space.

Benda earned a bachelor’s degree from Hampden-Sydney College, a Masters of Divinity degree and a Masters of Theology degree from Union Presbyterian Seminary and a Juris Doctor from Regent University School of Law. He was born in Norfolk and raised in Virginia Beach. He and his wife, Shannon, have three daughters.

Governor: Texas will build its own border wall

Governor: Texas will build its own border wall

Lynchburg City Council on Tuesday night approved its fiscal year 2022 budget of $426.1 million, which represents about a $4.6 million increase…

Wynter Benda speaks before city council after being appointed the new Lynchburg city manager during a meeting Tuesday.

Members of the audience clap as Wynter Benda is appointed the new Lynchburg city manager by city council during a meeting Tuesday.

Lynchburg Mayor MaryJane Dolan speaks on behalf of Benda before he is appointed the new city manager.