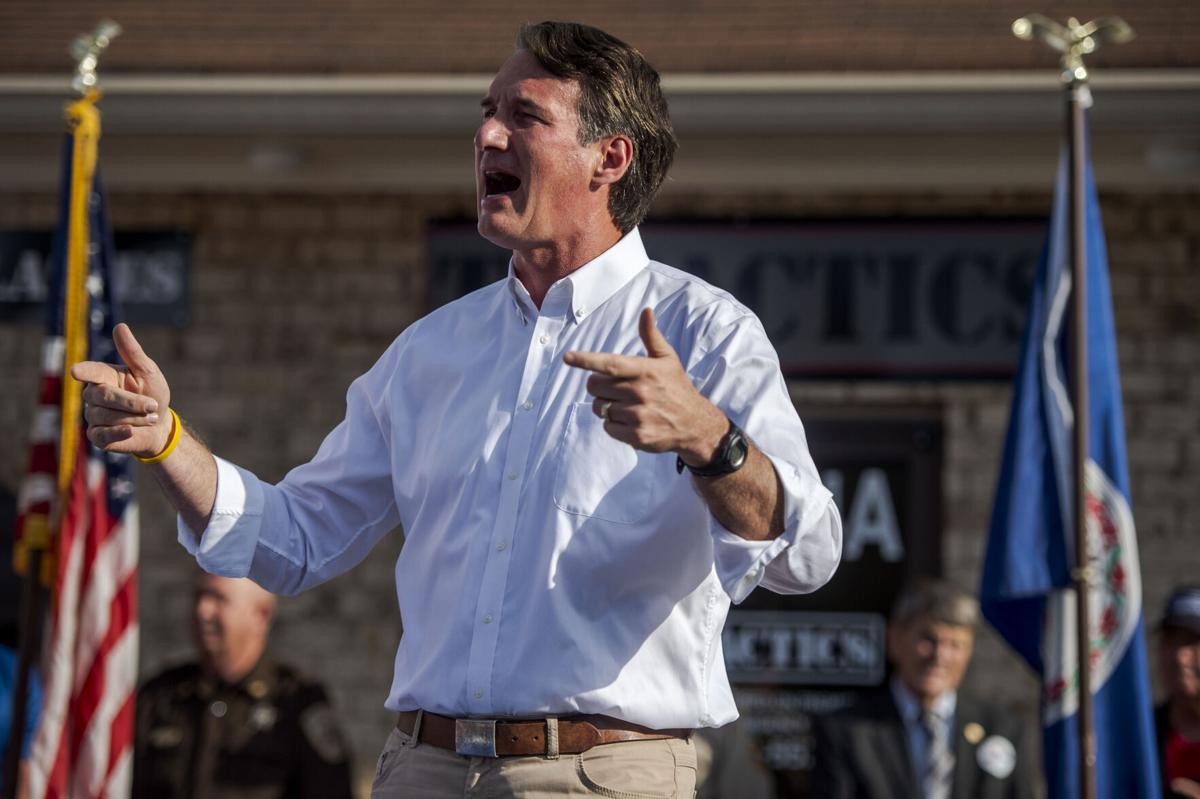 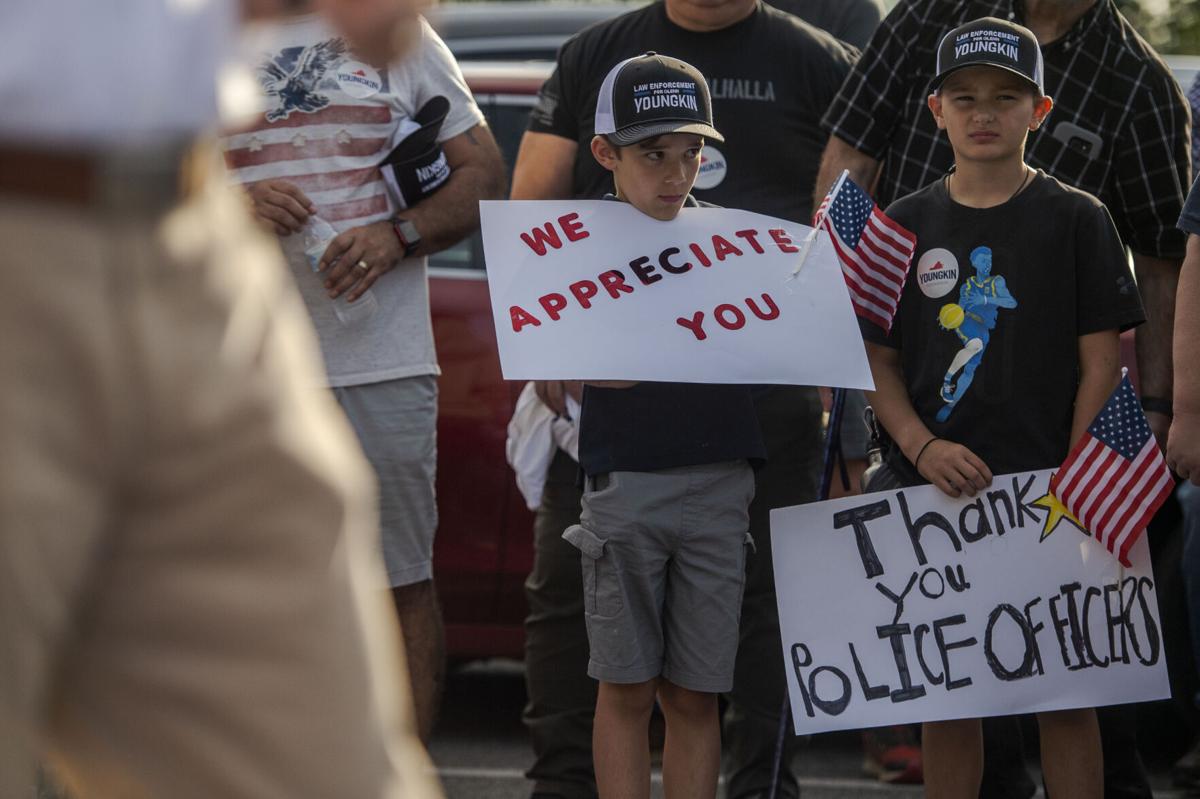 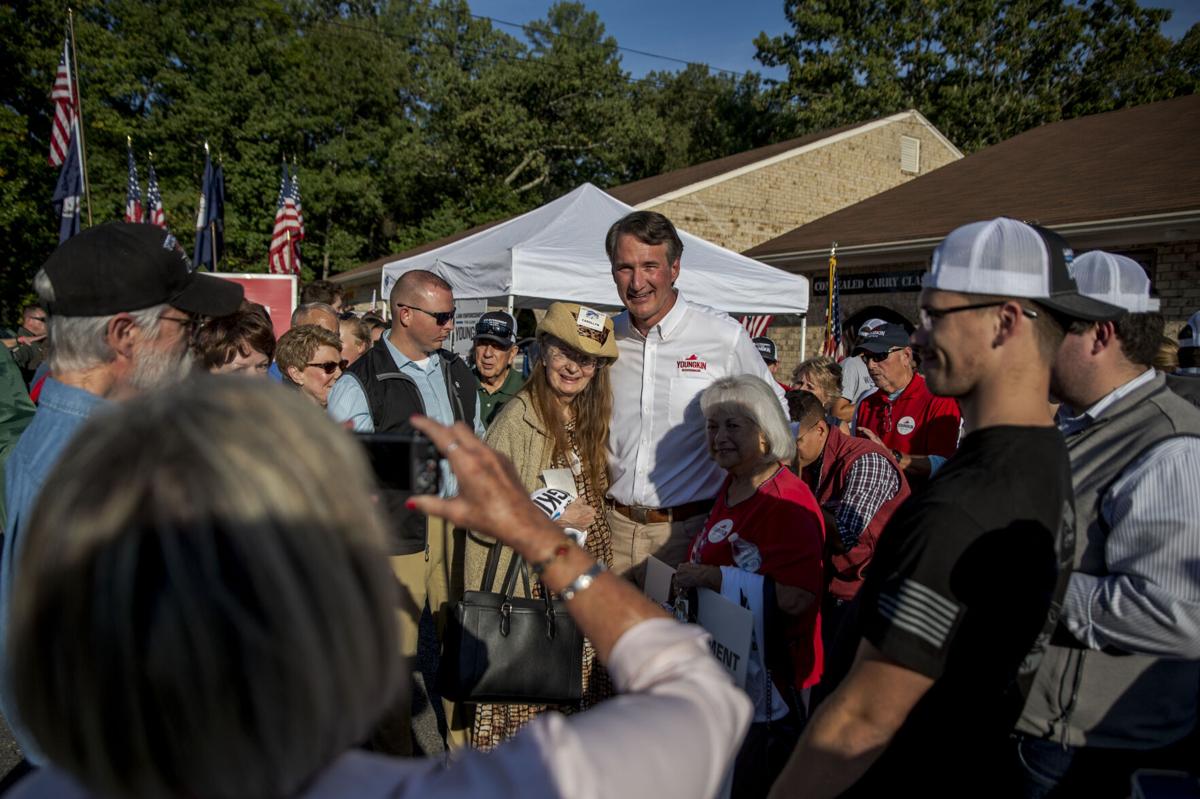 Glenn Youngkin takes a photo with a supporter after speaking during a campaign stop at T4Tactics, a firearms training facility, on Wednesday. 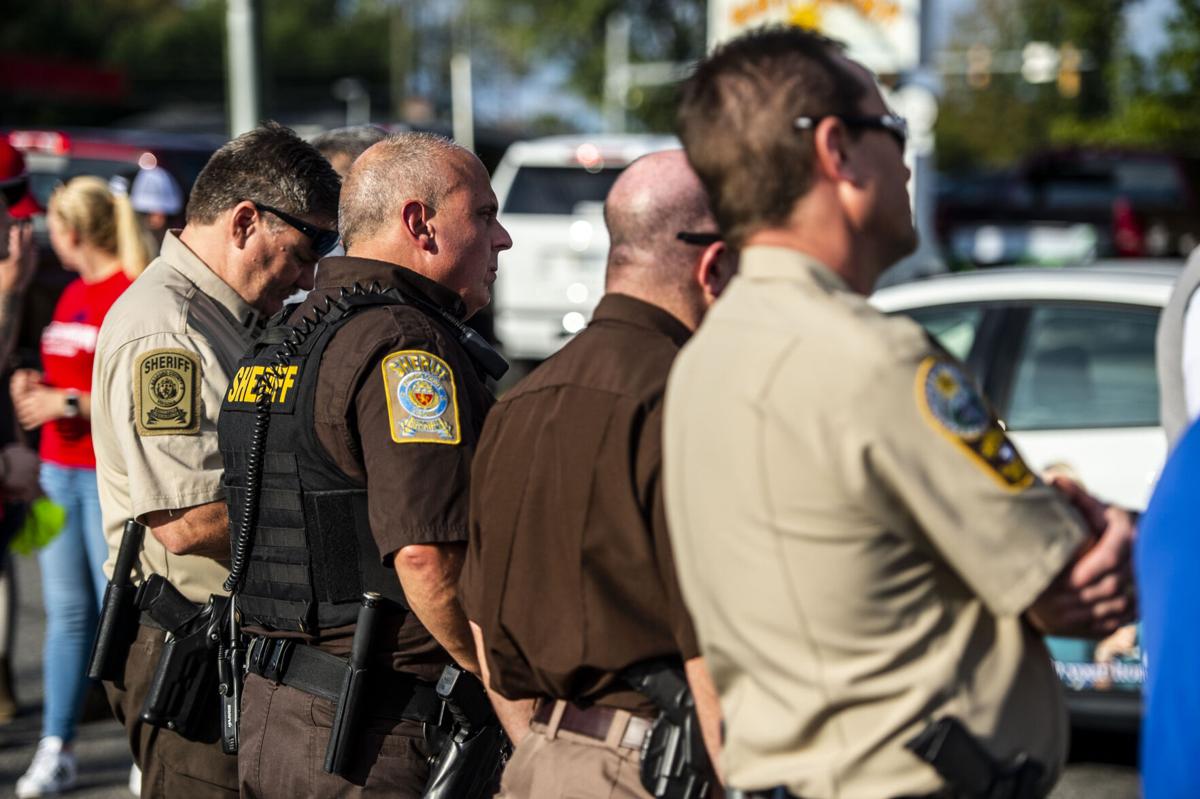 Members of the Campbell County Sheriff's Office listen to Republican gubernatorial candidate Glenn Youngkin speak during a campaign stop at T4Tactics on Wednesday. 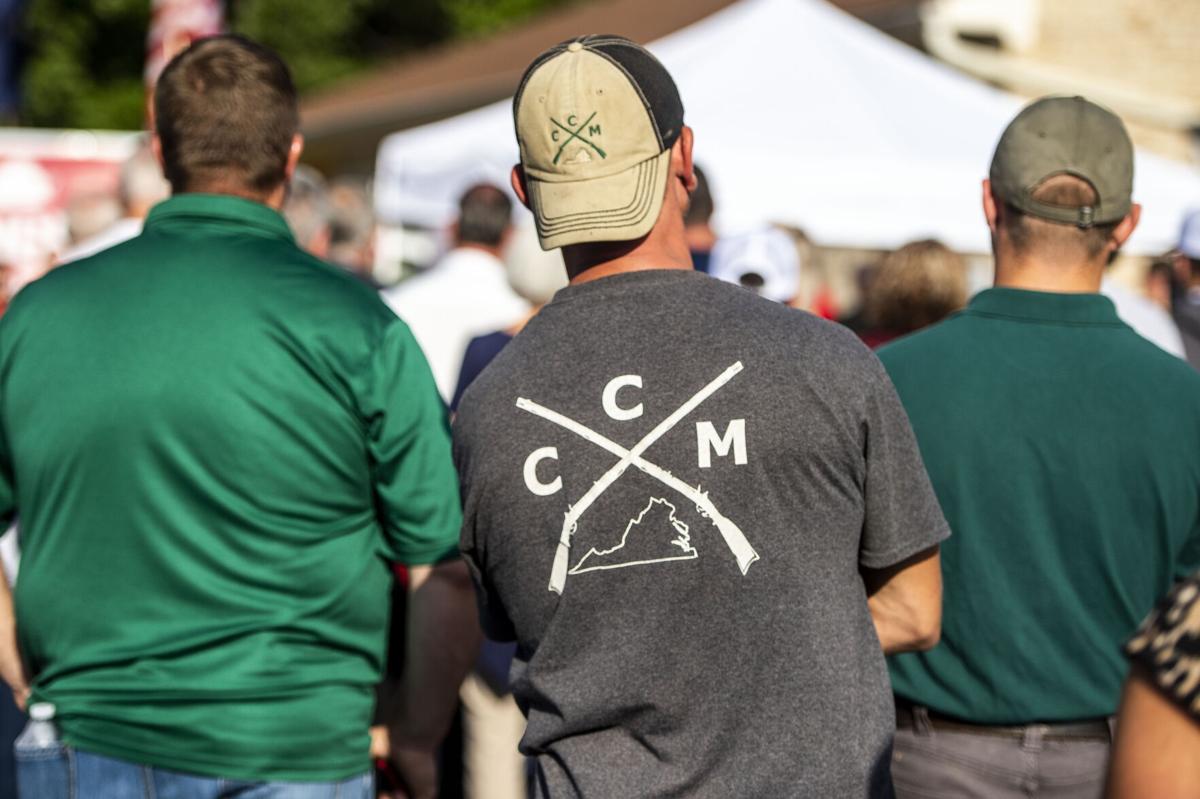 Members of the Campbell County Militia listen to Republican gubernatorial candidate Glenn Youngkin speak during a campaign stop at T4Tactics on Wednesday. 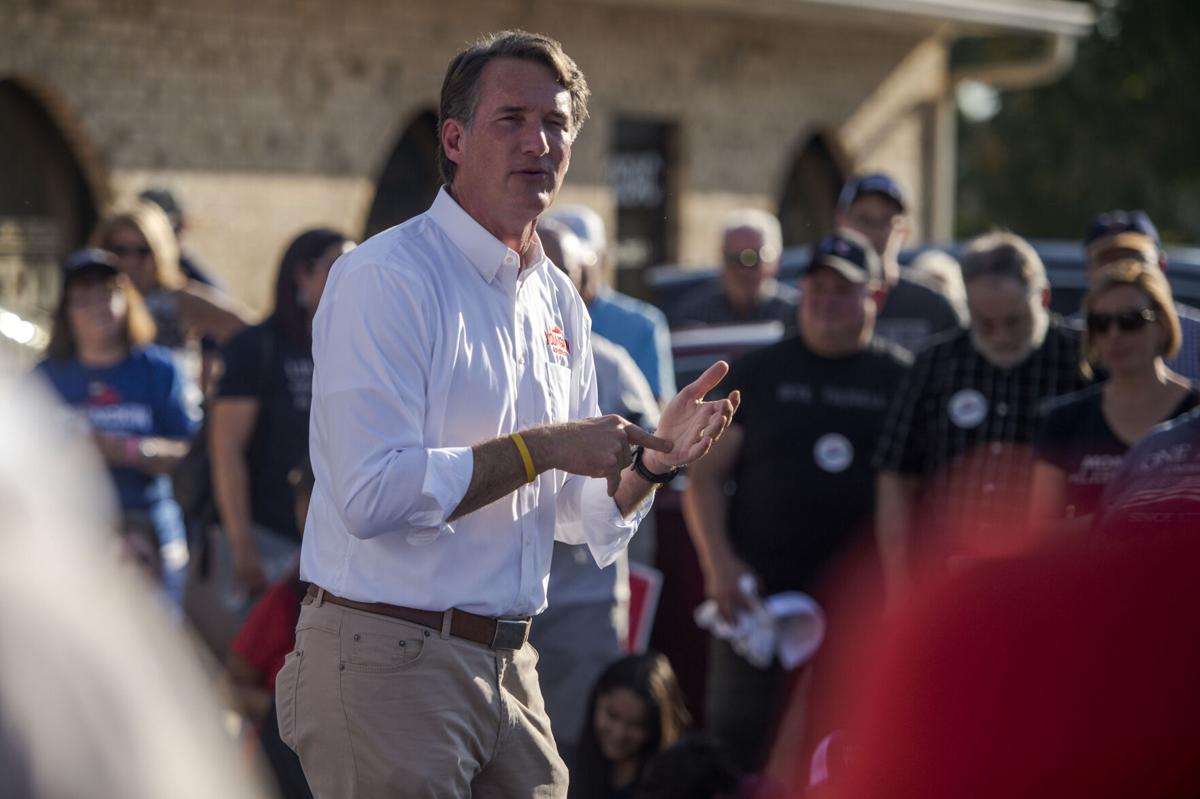 A crowd packed the parking lot at T4Tactics on Timberlake Road, a business that trains people in active shooter awareness and response training, to hear the former co-CEO of the private equity firm The Carlyle Group give his remarks on "failed leadership" and "dangerous policies" he said have left Virginia less safe.

Youngkin laid out his “Day One Game Plan,” his plan to make Virginia “the best place to live, work, and raise a family,” while drawing stark contrasts between his policies and Democratic gubernatorial candidate Terry McAuliffe’s, who he is seeking to deny a second term in the governor’s mansion.

“This is a moment for us to look at our law enforcement heroes, our heroes, and say one thing: 'Thank you.' That’s it,” Youngkin said with the opening lines of his speech.

“They stand up for us, they keep us safe. They actually put your interest in front of theirs when there’s challenges and problems and danger; they run to it when everybody else runs away from it.”

Youngkin laid out his plan to keep law enforcement officers safe, as well as other ways he plans to change current policies from Richmond.

“On day one, we are going to comprehensively fund law enforcement,” he said. “Higher salaries, funding for equipment, funding for training, all on day one. It’s all going to change.”

One of the final things Youngkin committed to doing in his day one law enforcement policies was to “fire the entire parole board and get started on a new one.”

“We have a parole board that is absolutely rotten to the core,” he said. “Let me just be clear, I believe in second chances, it’s part of my faith. But I don’t believe in 57th chances.”

Virginia's parole board has been criticized this year for being too lenient on convicts and for failing to properly notify crime victims and prosecutors when inmates were set to be released.

Youngkin’s speech did not just cover law enforcement; he dove into other topics such as taxes, education, the economy and “making the government work for us.”

He said his plan to reduce taxes for Virginians includes eliminating the grocery tax, which he called “a terrible tax; it’s the most aggressive tax in the world.” His tax plan also includes what he calls the “largest tax rebate in the history of Virginia,” which gives $600 to people filing jointly and $300 to those filing individually.

Youngkin also laid out his education plan, which he said he hopes will close the education gap in the state that is “wholly unacceptable.”

He committed to keeping schools open five days per week, saying schools will “never be closed.” He also said they would fund “the highest education budget in the history of Virginia” to raise salaries, rebuild crumbling schools, and make sure special education programs are up to par.

Youngkin also added he continues to support building a charter school program to give parents the choice of schools for their children and criticized McAuliffe for his comment on education at the Sept. 28 debate, when he said “I don’t think parents should be telling schools what they should teach.”

McAuliffe's comment came in the context of discussion over recent events in which parents, most recently in Fairfax County, have objected to sexually explicit material in educational material, including books.

Addressing his plan for the economy and making the government work for the people, Youngkin pitched his plan to promote economic growth in the state.

“Here’s where it starts,” he said, “a proactive statement from your governor that we will never have lockdowns again, we are not going to close business.” He also continued to show his support for the “right to work” in Virginia, saying his administration would not “force unionization on anybody.”

One of the last things the gubernatorial candidate said he would do as a part of his plan is to “launch a government-wide audit for waste, for fraud, for transparency, and start with the [Department of Motor Vehicles] and the Virginia Employment Commission.”

As Youngkin closed out his speech in front of local officials, law enforcement and a crowd of supporters, he said, “So we find ourselves here and now, in a moment where we need to do what Virginians do, and that is lead. We do not follow, settle, we lead.”

“And that’s what we’re going to do, is stand up for our constitution.”

MORE INSIDE: McAuliffe urges Dems to use muscle on voting, infrastructure. Page A5

“On day one, we are going to comprehensively fund law enforcement.”

Constructing wireless communication facilities — specifically wireless towers — on properties that would formerly have required rezoning for approval may become a less arduous process with a proposed amendment to Bedford County’s zoning ordinance.

An Appomattox County Board of Supervisors candidate and his wife were indicted Wednesday on fraud charges related to his campaign.

Lynchburg-area Republicans and law enforcement gave Jason Miyares a warm welcome Thursday afternoon as he stopped in the Hill City on a stumping tour for his campaign to become Virginia’s attorney general.

The scheduled conversion of Church Street to two-way traffic has been delayed until Oct. 15 due to inclement weather.

Glenn Youngkin takes a photo with a supporter after speaking during a campaign stop at T4Tactics, a firearms training facility, on Wednesday.

Members of the Campbell County Sheriff's Office listen to Republican gubernatorial candidate Glenn Youngkin speak during a campaign stop at T4Tactics on Wednesday.

Members of the Campbell County Militia listen to Republican gubernatorial candidate Glenn Youngkin speak during a campaign stop at T4Tactics on Wednesday.