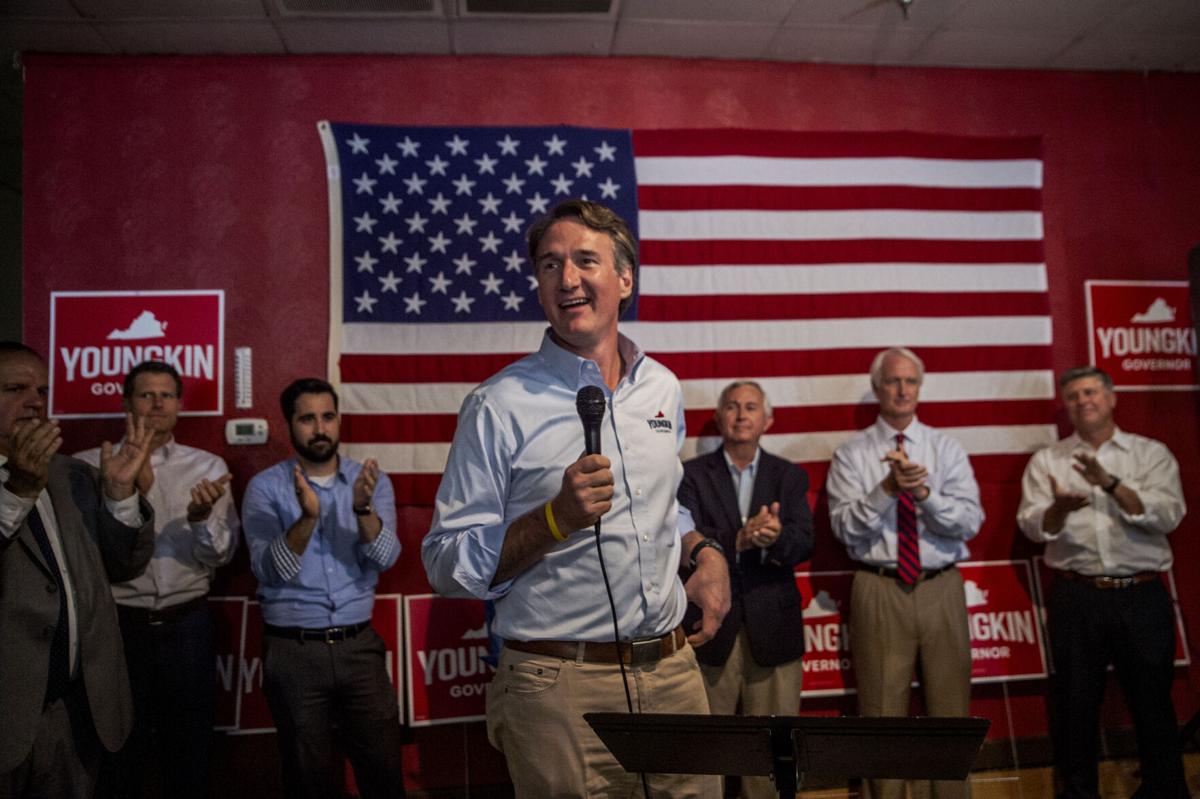 Virginia GOP gubernatorial candidate Glenn Youngkin speaks at an opening event for his Lynchburg headquarters in the Candlers Station shopping center on Aug. 26. 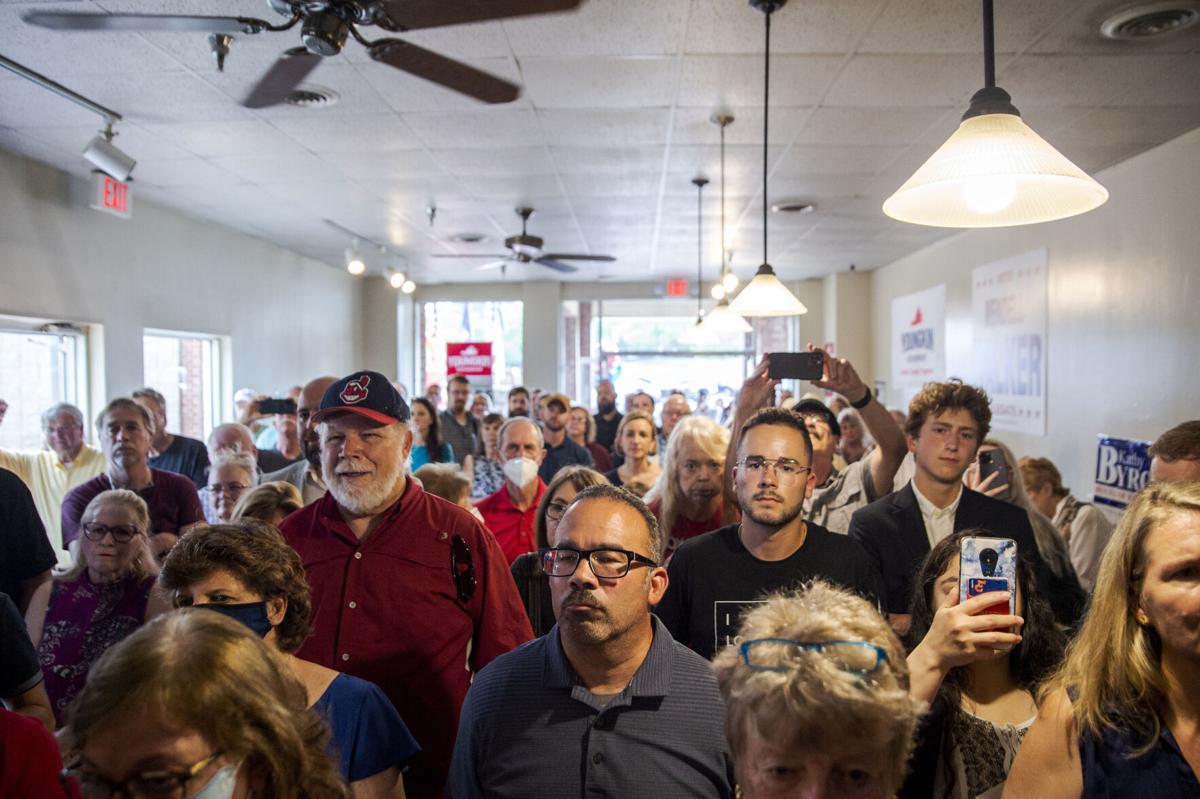 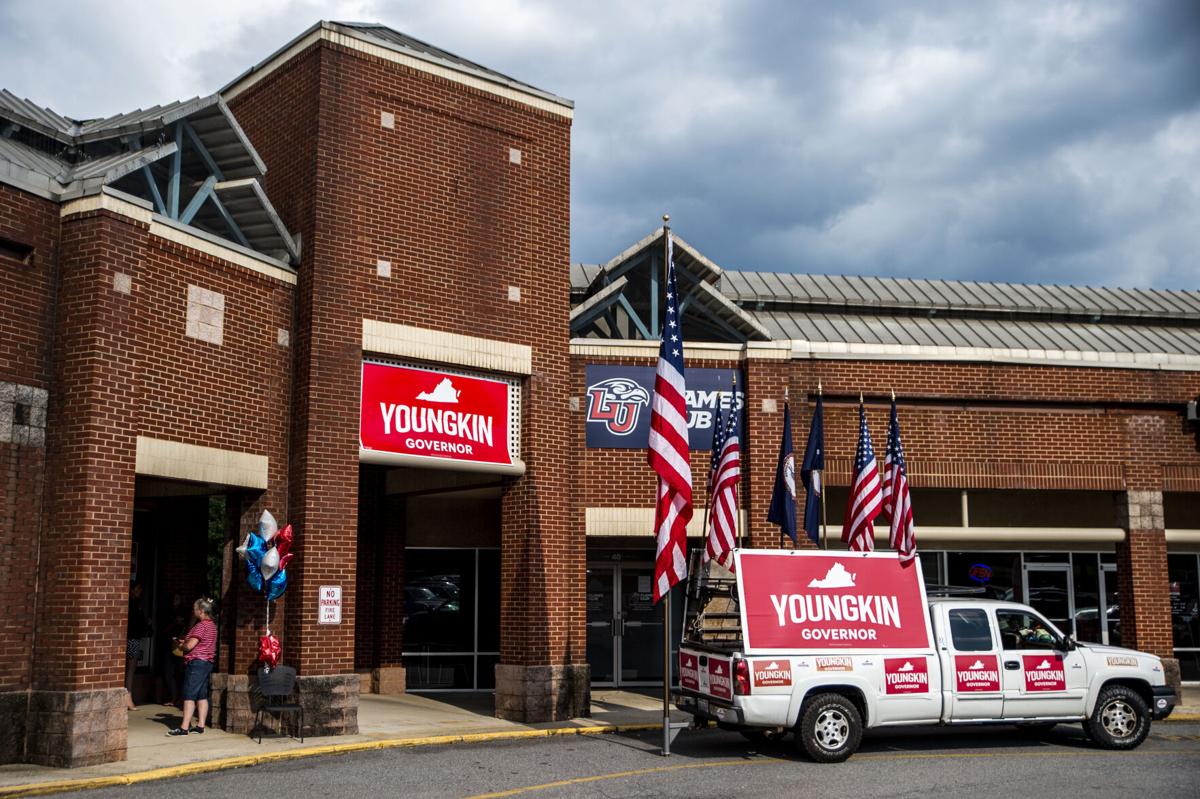 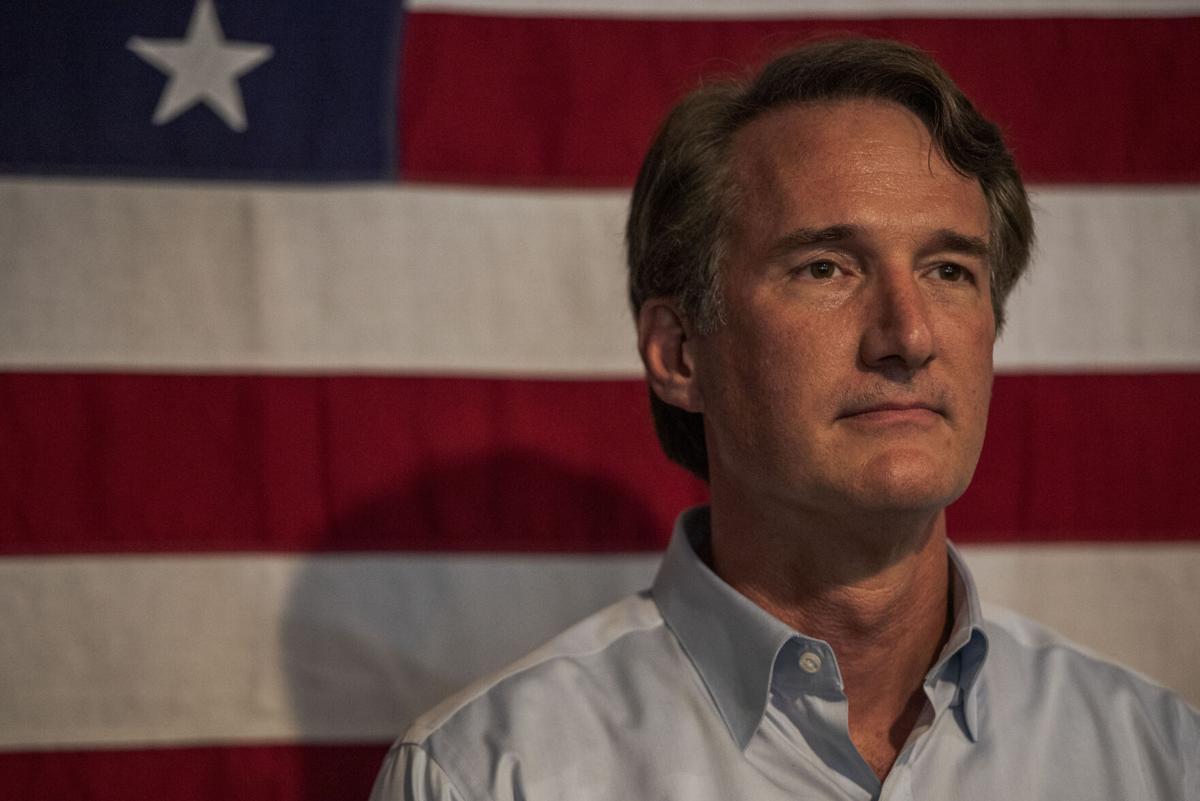 Virginia GOP gubernatorial candidate Glenn Youngkin stands back after speaking at an opening event for his Lynchburg headquarters in the Candlers Station Shopping Center on Aug. 26. 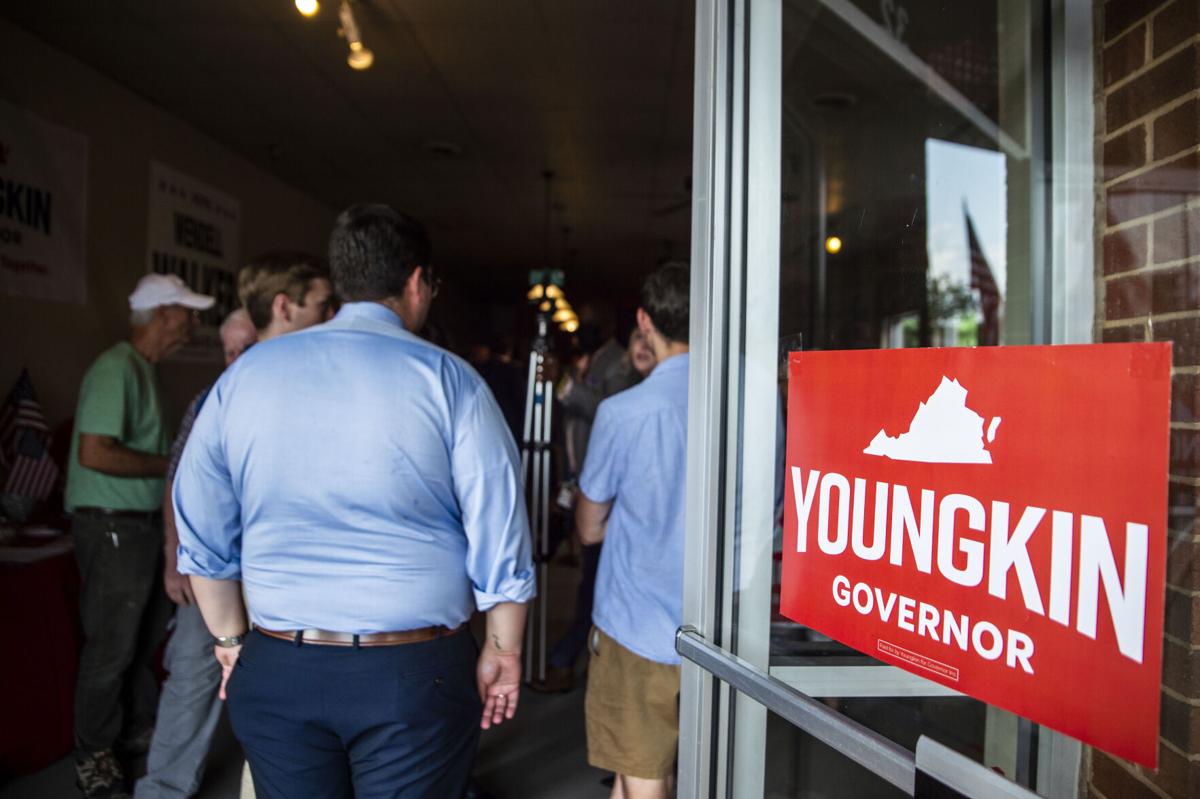 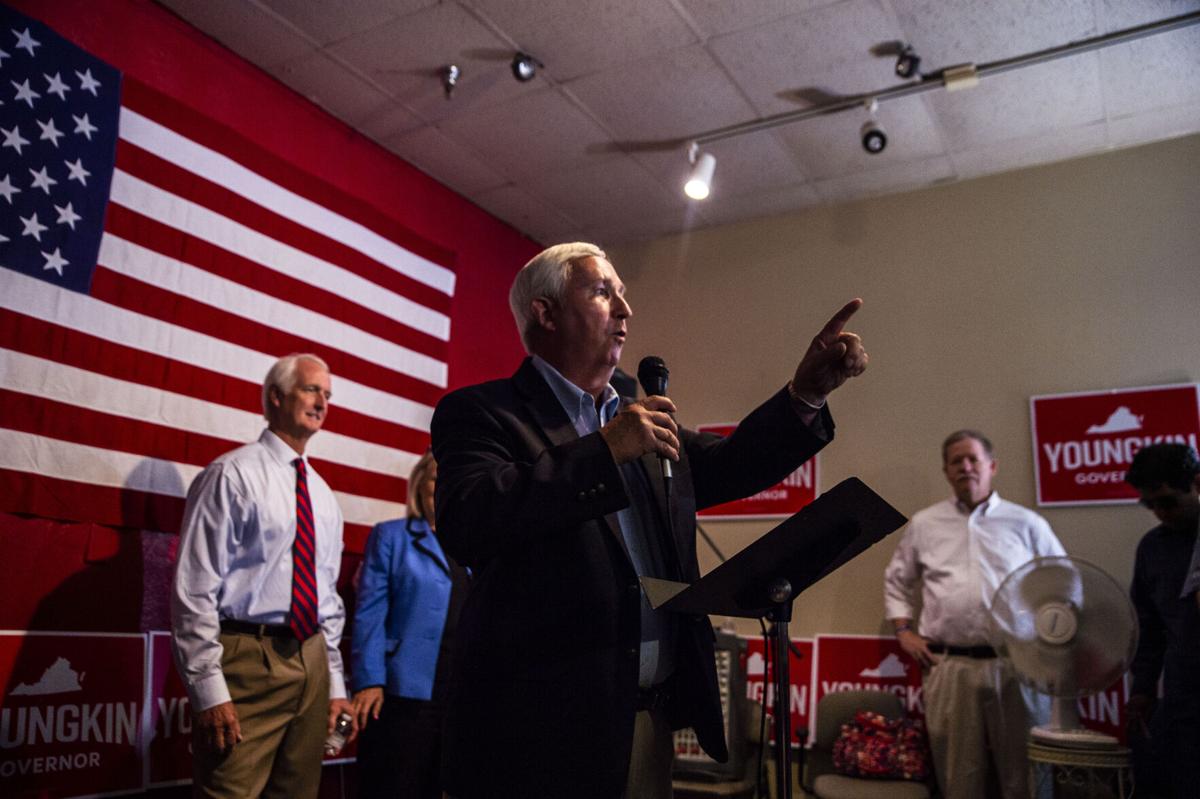 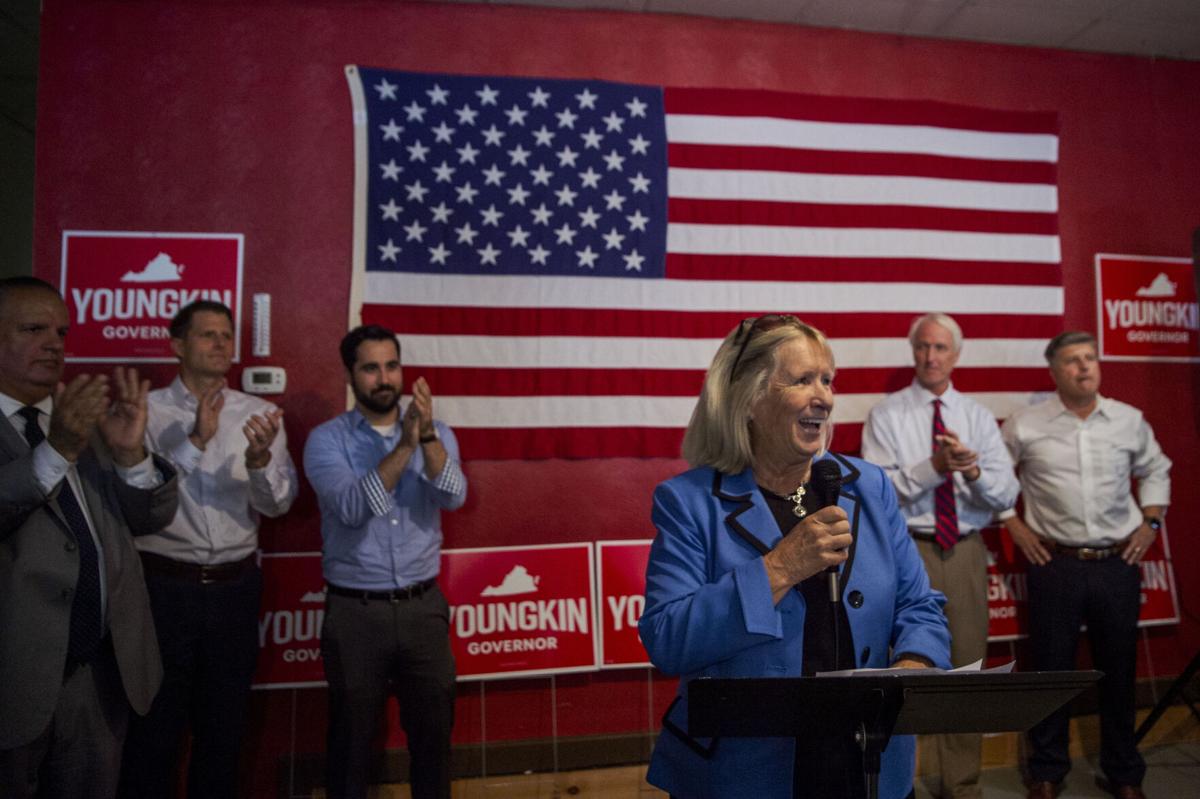 Three weeks before the start of early voting in Virginia, Republican gubernatorial candidate Glenn Youngkin rallied supporters Thursday in Lynchburg with a charge to vote early and encourage turnout in reclaiming the state for the GOP.

A standing-room-only crowd packed a storefront space in the Candlers Station shopping center that now is a campaign office as Youngkin, a political newcomer and businessman, looks to deny Democrat Terry McAuliffe a second bid for the governor’s mansion.

“This is not about a house, not about a title,” Youngkin said. “It’s about a job that needs to get done.”

The former co-CEO of the private equity firm The Carlyle Group blasted President Joe Biden’s handling of the withdrawal of U.S. troops from Afghanistan. In the past few weeks the Taliban has taken over the country and a major attack on the Kabul airport Thursday killed at least 13 U.S. service members, the Pentagon said.

In an interview after the event, Youngkin said Biden has failed the Afghan people and Americans who live in Afghanistan, and he claimed the president belittled the sacrifices many have made in working to rebuild the country.

“It is absolutely so shockingly unacceptable,” Youngkin said of the recent unfolding of events.

He said Virginia has a role in accepting refugees, especially interpreters who helped U.S. forces. “We should actually make room for them, but we actually have to process them appropriately.”

He told the crowd he doesn’t support government mandates on wearing of masks, vaccines and school and business closures as the delta variant of COVID-19 surges, in some areas skyrocketing, across the state.

“I believe Virginians should be making all those decisions,” he said to applause.

In the interview, he said he encourages Virginians to get a coronavirus vaccine, which he described as the best way to protect against spread of the virus, and said more work is needed on educating people about it and making shots accessible and easier to get.

“I do believe that Virginians get to make that decision, and to have it mandated or thrust upon them, I don’t think is right,” Youngkin said.

He also during the interview said he looks forward to McAuliffe addressing a lawsuit the Republican Party of Virginia filed Thursday in Richmond Circuit Court that claims two McAuliffe staffers who signed on as having witnessed the former governor signing a declaration of candidate form did so falsely. The McAuliffe campaign called the litigation a “desperate” attempt to clear the path for Youngkin.

“These are very serious questions, and the McAuliffe campaign seems to be claiming that Terry McAuliffe doesn’t have to follow the law like everyone else who runs for office in Virginia,” a statement from the Youngkin campaign said. “We will be closely monitoring the situation to ensure all legal requirements are followed.”

Youngkin told supporters he will fight for law enforcement and invest in higher salaries and better equipment. He said he would reestablish a standard of excellence in public schools and hold educators accountable in achieving results.

“Then we have to fund it,” he said of investing in better salaries for teachers, adding the current curriculum has been hijacked by a political agenda.

He said he would introduce charter schools into Virginia’s public school system “in a meaningful way.”

“We’re going to launch 20 new innovative charter schools, and that’s just beginning,” Youngkin said. “We’re going to close the gap on [school] choice in Virginia so fast it’s going to make your head spin, because our families so deserve this. Our education system is going to be reestablished as the best in the country.”

He said he also will reinvigorate the economy and plans to generate 400,000 jobs over four years.

“We are not performing like the best state for business,” Youngkin said. CNBC last month named Virginia top in business in its annual ranking of states.

“We are coming out of this pandemic so slowly,” Youngkin said.

He opposes government payments to people choosing not to work who are able to, while noting he doesn’t want to remove a safety net for those who truly need the assistance.

Del. Kathy Byron, R-Bedford County, attended along with state senators representing the Lynchburg area, Steve Newman and Mark Peake, and Del. Wendell Walker, R-Lynchburg, and his predecessor, Scott Garrett. Byron heavily criticized the Democrats’ leadership in Virginia and praised Youngkin’s business experience and perspective that she said would help the state regain a booming economy, stand up for police and not “coddle” criminals.

“His diligence, persistence and hard work has brought about his success,” Byron said. “He earned his way every step of the way. He’s the right leader that Virginia needs just right now.”

Youngkin said after the event the Republican Party needs to do a better job reaching into minority communities and he is “building a bigger tent” in improving those efforts.

“I’m going to go work for all Virginians,” he said.

GO ONLINE: For more photos and video from the event, visit newsadvance.com.

Paris may use flying taxies during the 2024 Olympic games

Paris may use flying taxies during the 2024 Olympic games

Biden: New variant cause for concern, 'not panic'

Biden: New variant cause for concern, 'not panic'

Virginia GOP gubernatorial candidate Glenn Youngkin speaks at an opening event for his Lynchburg headquarters in the Candlers Station shopping center on Aug. 26.

Virginia GOP gubernatorial candidate Glenn Youngkin stands back after speaking at an opening event for his Lynchburg headquarters in the Candlers Station Shopping Center on Aug. 26.