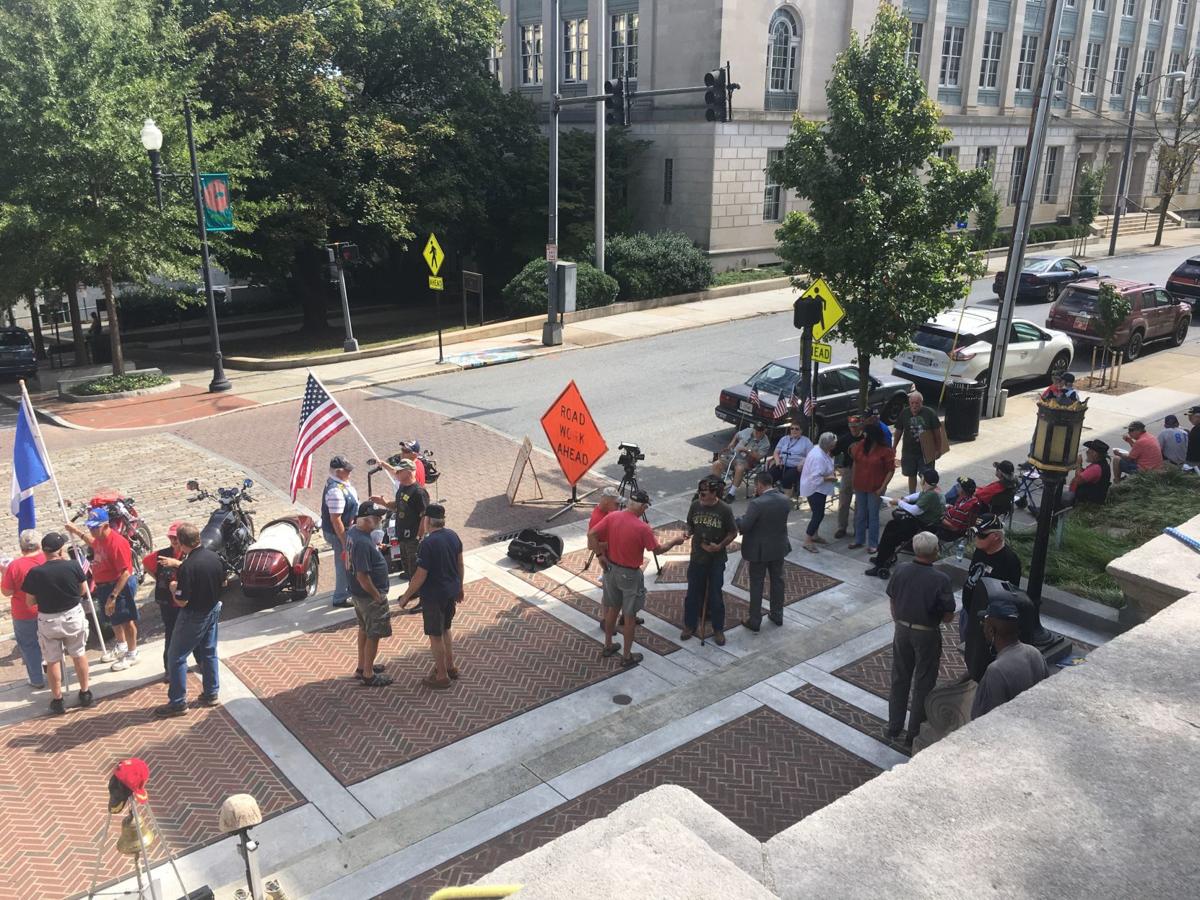 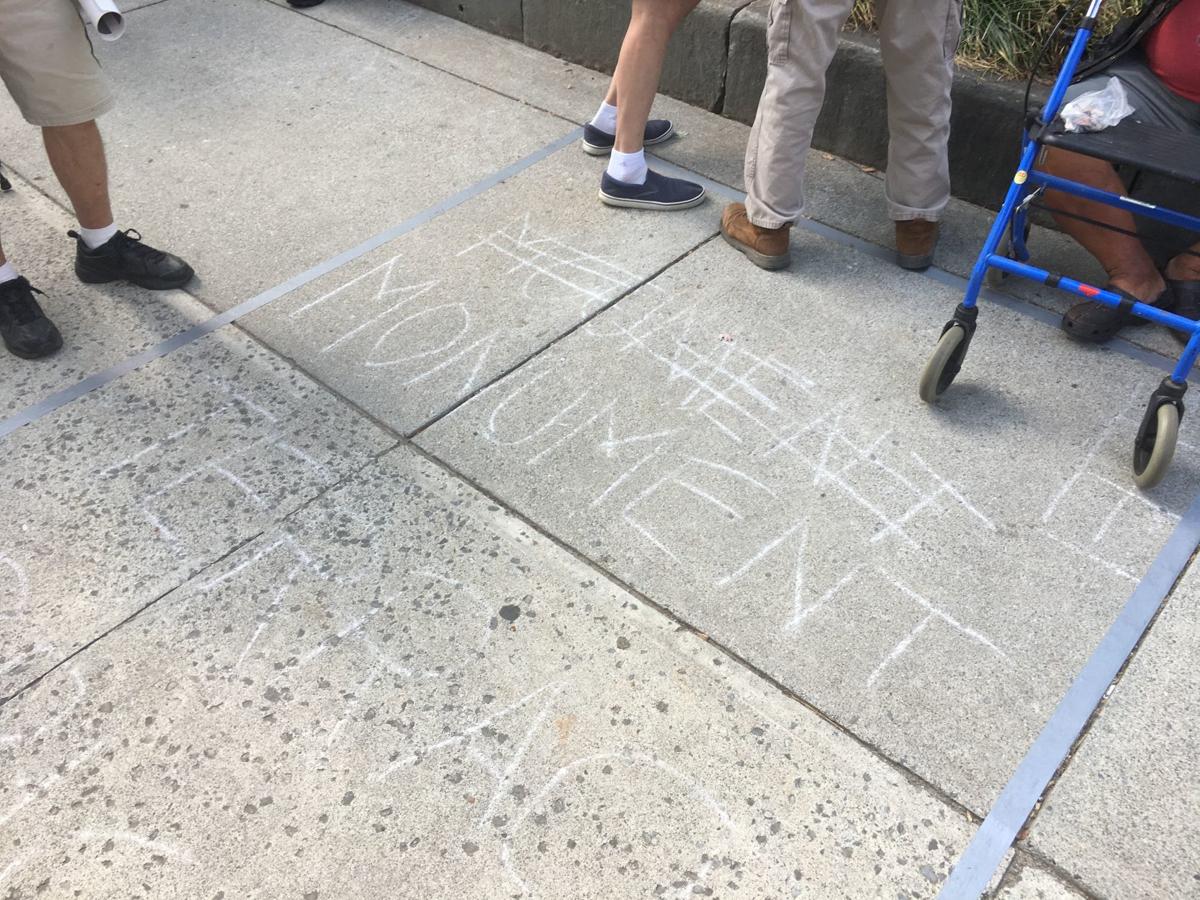 The 9-foot-by-7-foot area on Court Street will the first 216 "Honor and Remembrance" bricks will be installed by Monument Terrace in downtown Lynchburg on Friday, Sept. 27, 2019. 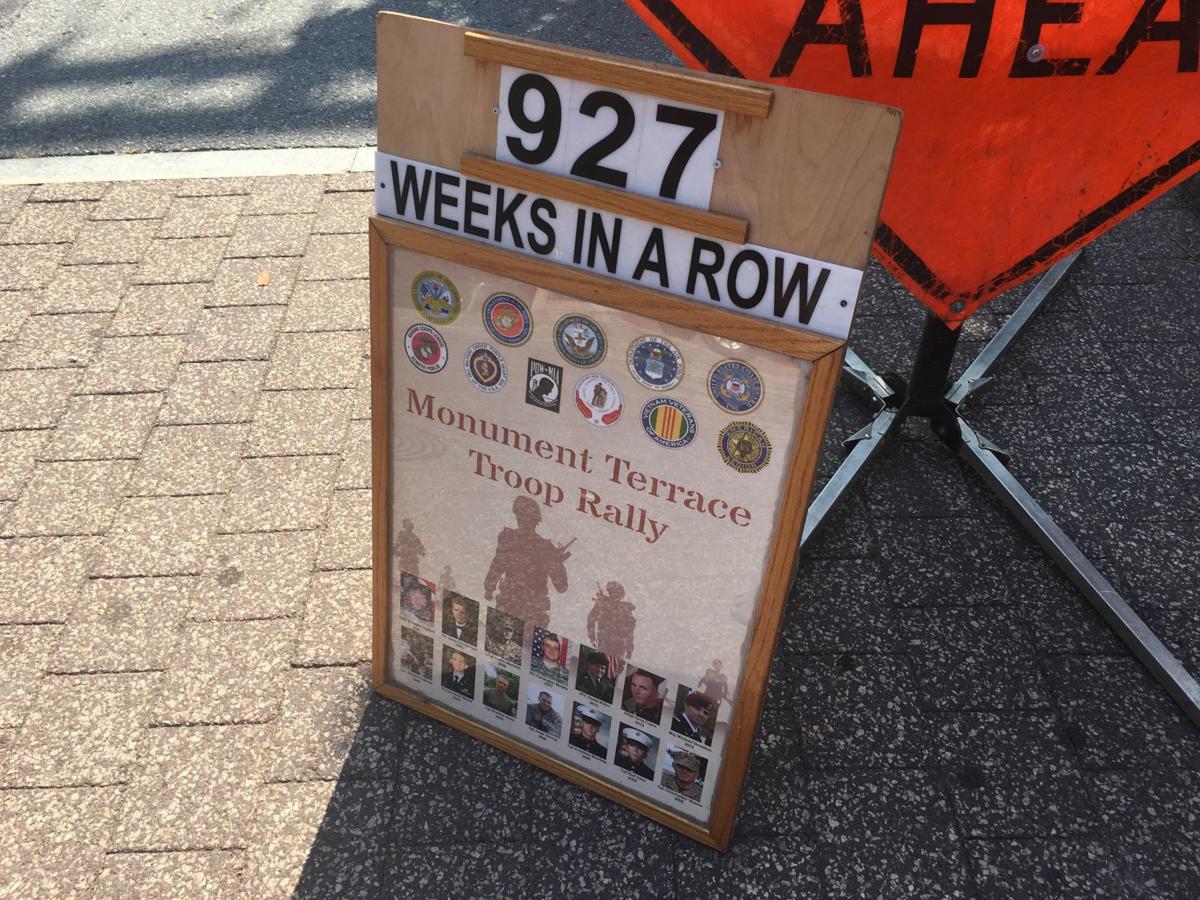 Friday, Sept. 27, 2019, was the 927th consecutive week veterans have gathered for the weekly "Support Our Troops" rally at Monument Terrace in downtown Lynchburg.

Every Friday, Steve Bozeman — a Vietnam veteran and vice president of the Lynchburg Area Veterans Council — walks along Court Street among veterans of World War II, Korea, Vietnam, Iraq and Afghanistan. Bozeman has been standing at the base of Monument Terrace with some of these veterans every week for nearly 18 years.

“This is still going strong and we have no plans to stop,” said Bozeman, one of the organizers of the weekly “Support Our Troops Rally” that started Nov. 30, 2001. “We share a lot of energy and patriotism between us.”

Bozeman said the first rally in 2001 was organized as a counterprotest to a group who gathered at Monument Terrace to oppose the invasion of Afghanistan following the terrorist attacks of Sept. 11, 2001.

Bozeman said 84 veterans who helped start the weekly rally have died since the first event 18 years ago, and more than 20 of them were veterans of World War II.

“When we started we could have a dozen or more WWII veterans out here with us,” Bozeman said. “Now we might see only two or three each week.”

In an effort to pay tribute to those 84 veterans — and others who serve their country or community — Bozeman started taking orders for “Honor and Remembrance” bricks that will line the street in front of Monument Terrace. The engraved bricks will be laid in 9-foot-by-7-foot sections along Court Street.

“The first 84 were reserved for the ones we’ve lost along the way,” Bozeman said. “The rest we started taking orders for. It makes a wonderful Christmas or birthday present for loved ones or is a great tribute to a family member who has passed away.”

Bozeman said “Honor” bricks are for active military personnel, military veterans, police officers, firefighters and EMTs. “Remembrance” bricks are for people in any of those categories who have died. The cost of a brick is $50, which includes three lines with 20 spaces or $56 for a brick with an added military or first responder logo. Bozeman said orders for the first 216 bricks sold in less than two weeks. Bozeman said he then started taking orders for an additional 9-foot-by-7-foot section.

After the first two sections of bricks are laid, additional sections are planned to be added along Court Street, he said.

“We will continue this down the block but it probably won’t be this year,” Bozeman said. “This is a pretty good start though.”

Bozeman said the city of Lynchburg approved the project and city officials have supported the effort by granting the group permission to install the bricks on city property.

“The city really helped us get through the permit process and were really supportive of this project,” Bozeman said. “Mayor Treney Tweedy was a wonderful advocate for us.”

Tweedy — a veteran of the U.S. Navy — said not only did she support the project but plans to place a brick order as well.

“I want to get one for my father, who also served in the Navy,” Tweedy said. “I also have three uncles that served in Vietnam and they all came home. When I first heard about this I realized how meaningful of a project it was.”

Tweedy said she enjoys working with the Lynchburg Area Veterans Council on efforts throughout the city.

“They never stop working,” Tweedy said. “When you have the level of volunteerism that we have here in Lynchburg there is so much you can accomplish. Anytime the city can support its veterans, we will.”

Jim Dorman, a World War II veteran who served in the U.S. Navy, said he looks forward to seeing his brick when it is laid next month.

“We’ve been talking about this for a year now so I’m ready to see it done,” Dorman said. “I think this will be great.”

Bozeman surprised another World War II Navy veteran, Ken Vanliere, and told him that his family had ordered him a brick of his own.

“I didn’t know anything about that,” Vanliere said. “That’s great news and a really nice surprise.”

Bozeman said any profit from the “Honor and Remembrance” Brick Project will go to the local chapter of the Military Order of Purple Heart (MOPH) and will be used to help veterans and their families.

“We aren’t looking to make much of a profit on these first ones but we will do OK if orders keep coming in,” Bozeman said. “These bricks are another way for people to pay homage to the fallen as well as those still living for their service and sacrifice.”

On Thursday, 216 bricks honoring local veterans were laid in a 9-foot-by-7-foot area of Church Street in front of Monument Terrace. Steve Boze…

Donald “Don” Carl said the ship he served on during World War II was a “non-fighting ship.”

The 9-foot-by-7-foot area on Court Street will the first 216 "Honor and Remembrance" bricks will be installed by Monument Terrace in downtown Lynchburg on Friday, Sept. 27, 2019.

Friday, Sept. 27, 2019, was the 927th consecutive week veterans have gathered for the weekly "Support Our Troops" rally at Monument Terrace in downtown Lynchburg.