In Lynchburg area, plenty of pumpkins left for picking during pandemic
Share this
{{featured_button_text}}
1 of 6 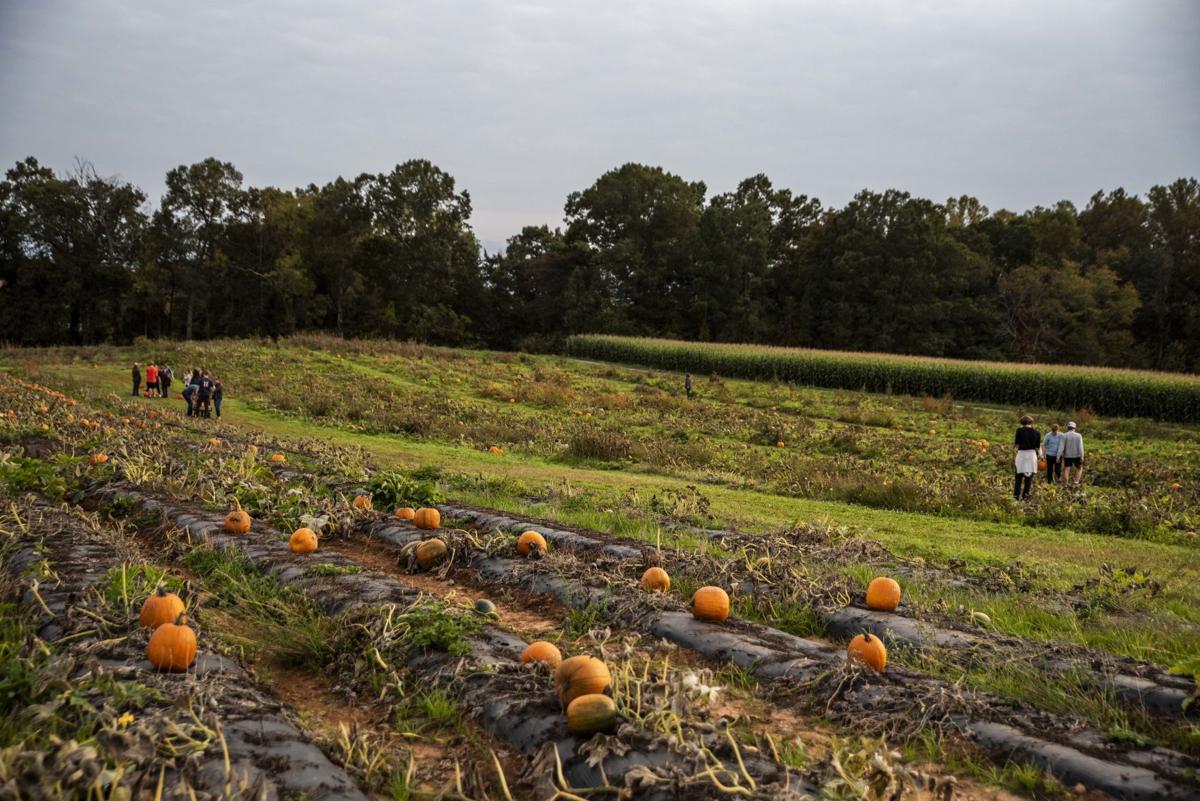 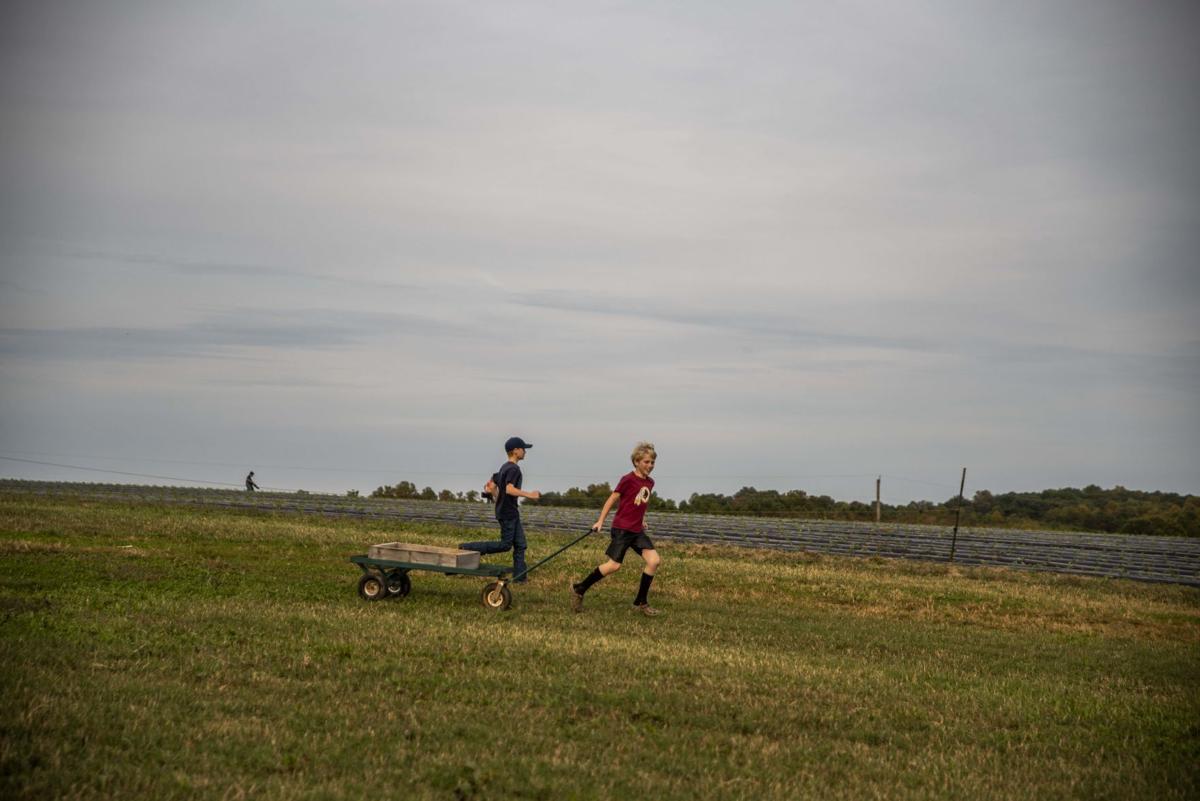 Two boys run through the field on their way to pick out pumpkins at Yoder's Farm on Friday, Oct. 9, 2020. 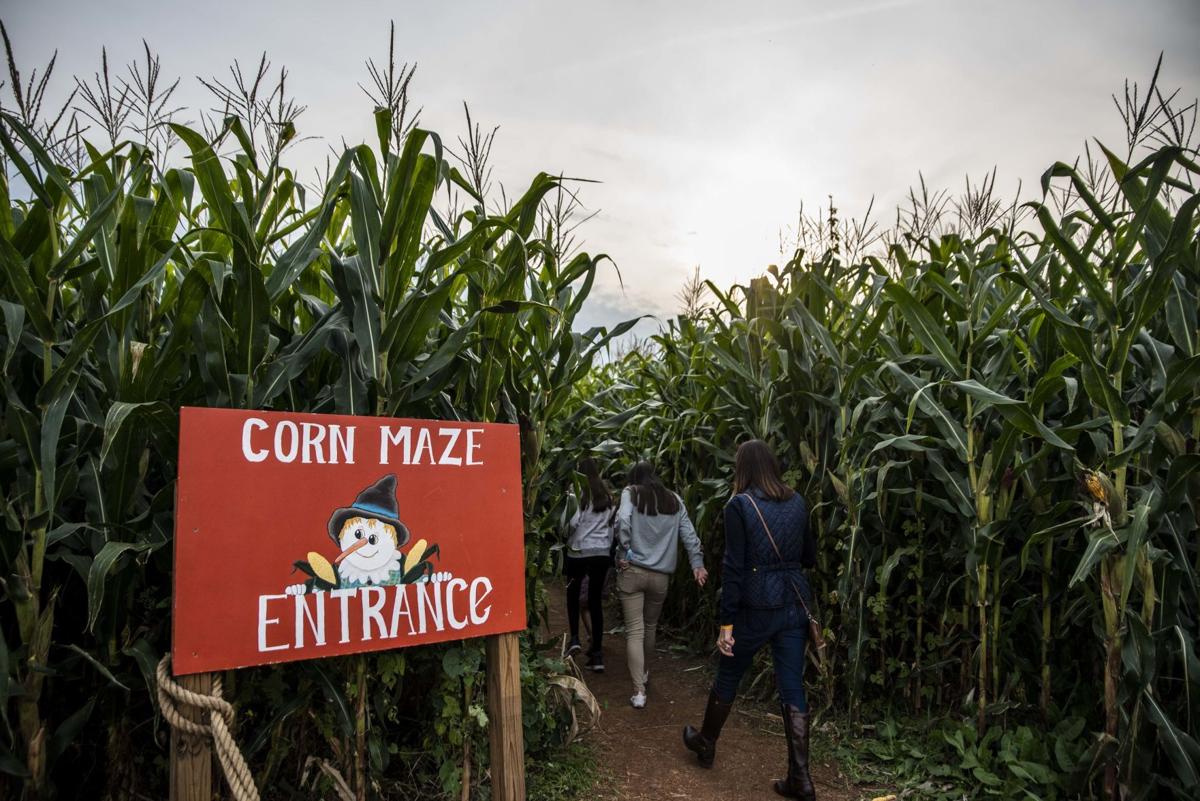 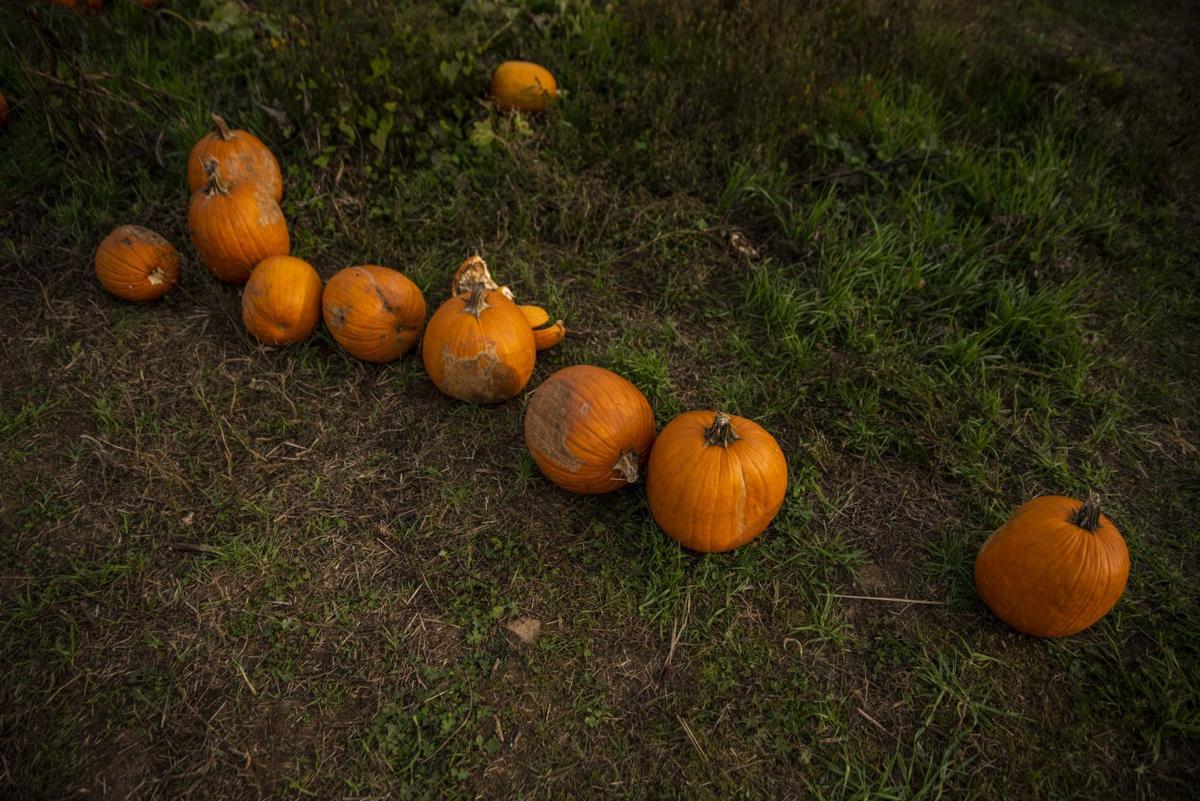 Unwanted pumpkins sit near the entrance to the pumpkin patch at Yoder's Farm on Friday, Oct. 9, 2020. 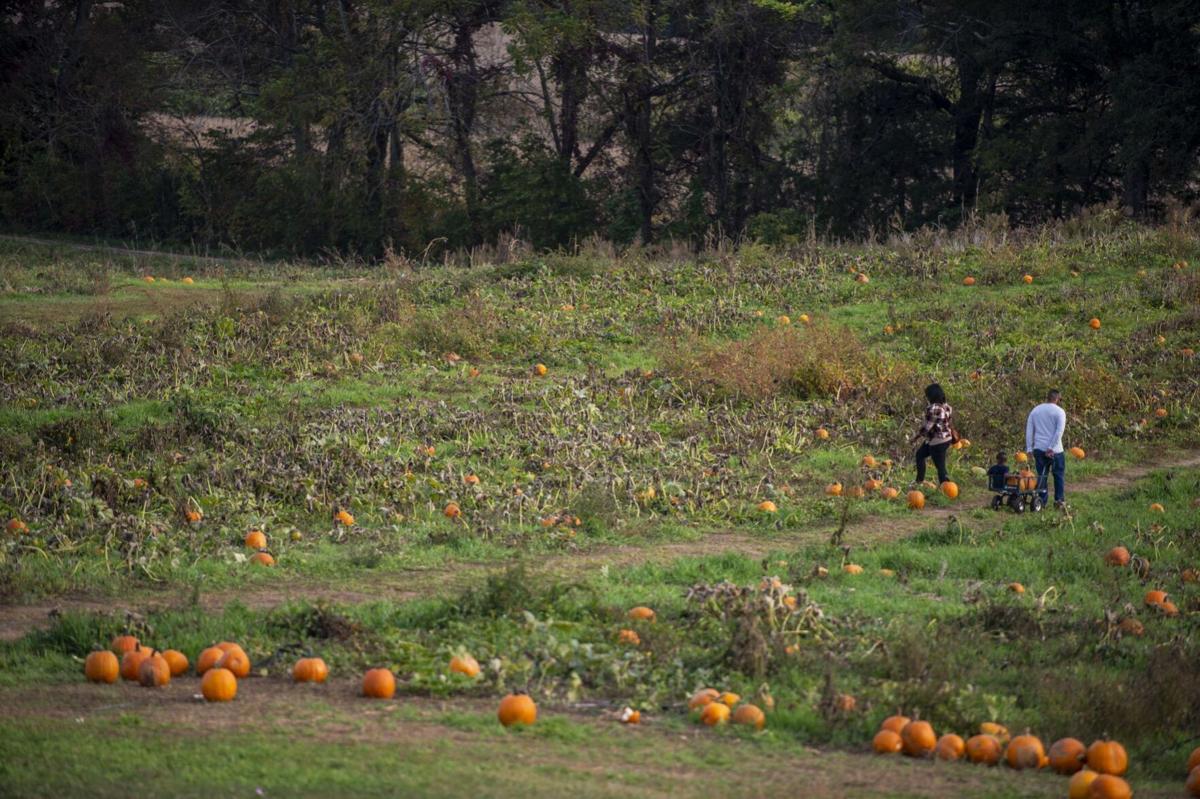 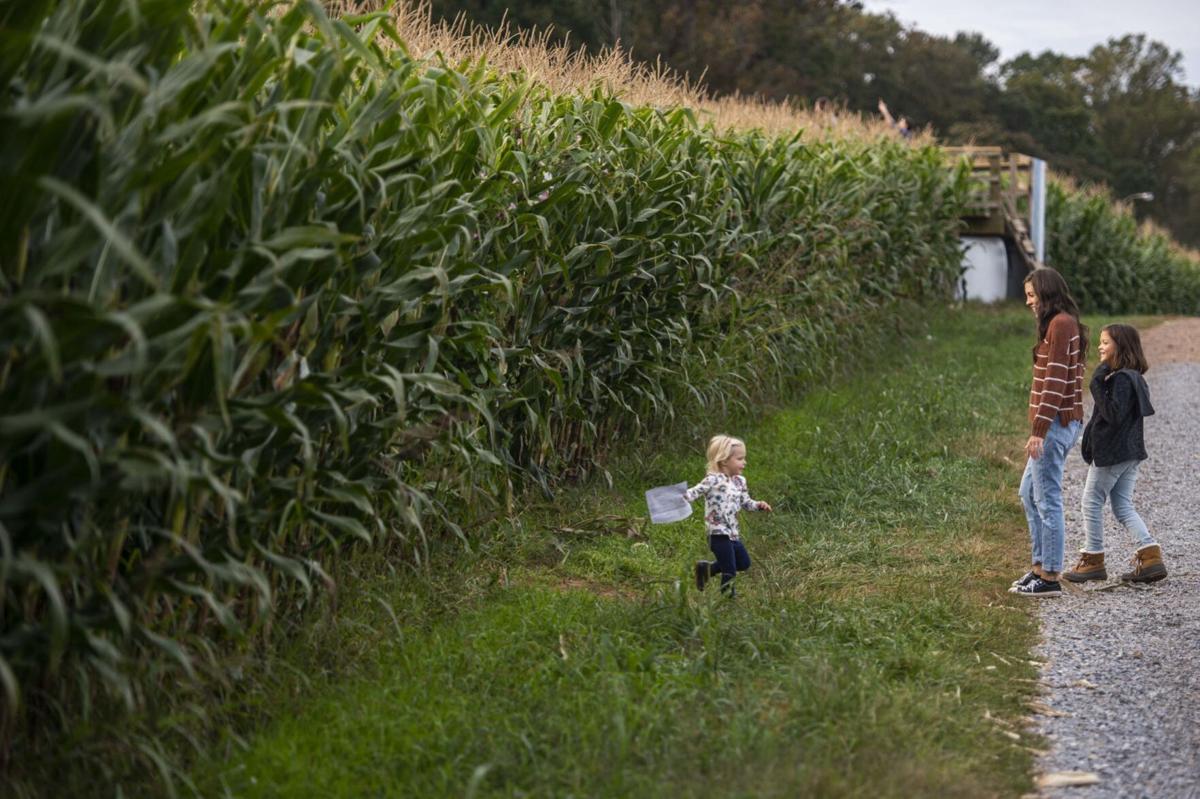 Loading up the family on a cool, crisp fall day to pick out a pumpkin has always been one of America’s favorite pastimes, and this year growers said they're seeing an increase in customers coming out to their farms.

They said it’s a combination of the cool autumn weather and effects from the pandemic.

“We saw more people in strawberry season and that’s going straight into fall season as people are looking for outdoor activities,” Lowell Yoder, partner at Yoders’ Farm, said. “The numbers are running proportionally higher than last year each weekend and we’ll get busier into October. Right into Halloween is the busiest Saturday.”

The Rustburg farm began implementing new policies such as encouraging social distancing and having all retail clerks staff wear masks in response to COVID-19.

Yoder said to help keep people safe, the farm won’t offer hayrides this year. The farm also is selling corn maze tickets online so people don’t have to wait in line together.

The farm is adding extended hours on Tuesdays, Wednesdays and Thursdays in an effort to keep Saturdays less busy.

“It’s been an interesting year,” he said. “I think people are looking for a little bit of normal, and in some ways, strawberries and pumpkins seem trivial but it provides them with a little bit of normalcy in such a chaotic and crazy year and something as simple as a pumpkin can bring some of that to people.”

Yoder said the size, quality and quantity of their pumpkins have been exceptional this year thanks to good weather and enough rain in August.

Yoders’ Farm plants pumpkins on four to five acres in Rustburg and grows 30 to 40 different varieties, some best for cooking and others for carving.

“We’ve found with pumpkins, people like a little bit of everything so we try to meet that need,” he said.

The farm was ready to sell pumpkins in late September. In the past, customers haven't usually purchased their pumpkin until later in October when it's cooled down, but Yoder said that hasn’t been the case this year.

“We opened with strong sales for two reasons: people are looking to get out and stay close to home and the other reason is the weather. Last year we had 90-degree days in October but we’ve had a pleasant fall. It’s made people realize: fall is here, so let’s get a pumpkin,” he said.

Hot weather is tough on pumpkins, he added, which has farmers running into issues with keeping them healthy longer, which was the case last year. Some pumpkins even got sunburnt last fall, Yoder said.

With the cooler temperatures, they are keeping well, despite the rain, which is not a pumpkin’s best friend, he said.

John Bruguiere, co-owner of Dickie Brothers Orchard in Roseland, said this was a great year for pumpkin growing because the crop ripened early in the season.

“Production was up and the quality was good for us,” he said.

The orchard has a small pumpkin patch of two acres and allows for “pick your own.”

The Nelson County orchard started its pumpkin season about three weeks ago and let pickers come out the third week in September.

“Pumpkins were early this year so we’re almost done,” he said.

As with all farming weather, Bruguiere said farmers prefer moderate rainfall — not too much, but also not none at all.

“We actually had too much this year,” he said. “An inch a week is perfect with any agricultural situation.”

He’s also seen an increase in people looking for safe and fun activities to do with their family during the pandemic.

“COVID is one reason to be outside. They’ve been cooped up inside and it’s safe out here,” he said. “Our place is easy to social distance and it’s not as large as some of the other jam-packed farms. People can spread out here.”

He added that there’s a fear among some people to go to the grocery store right now to get their food so instead, they’re turning to local farms to supply their needs.

“It’s twofold. One reason is COVID and being outside, another is to get fresh food where less people are,” he said.

In response to COVID-19 to provide additional space for customers to spread out, Gross Orchard built an open-air pavilion near its country store in late July.

Ronnie Gross, partner in the Bedford farm along with his father, Walter Gross, said the weekends are usually busy anyway. But, he’s seen an increase in people coming to the 130-acre farm, not just for pumpkins this fall but also for peaches, cherries, apples and pears this past spring and summer.

The orchard set up different stations with tents around the property for staff to keep an eye on people and ensure everyone is staying safe.

Gross said there are still hundreds of pumpkins left on the farm to be picked up and added the cooler, 40-degree evenings have helped to create a quality crop.

“People are just having such a good time,” Gross said. “We’re trying to offer wagon rides every weekend pulled by horses and doing special things each Saturday that’s a surprise for people. So many families come here from the surrounding area and we just try to make sure everyone is well taken care of.”

He said the pandemic has caused an “uphill battle” for everyone but God has blessed the orchard with a successful growing season and continuous support from the community.

“With all the difficulties we’ve had this year, we’re still seeing people supporting local agriculture and wanting to know where their food comes from,” Gross said.

Another COVID-19 unit converted at Lynchburg General as facilities 'strained'

With COVID-19 hospitalizations on the rise, Centra Health has converted another unit at Lynchburg General Hospital to specifically deal with those patients.

Wayne and Susan Stoner’s Cabell Street home was a disaster when they purchased it in 2004.

Liberty University students will start the spring semester by quarantining in their dorm rooms and briefly taking classes online, and the school has eliminated the traditional weeklong spring break.

Health officials Tuesday asked people to do their part to stop the spread of the coronavirus as the region's hospitals admit more COVID-19 patients.

More than 20 years in the making, Lynchburg Parks and Recreation celebrated its long-awaited Blackwater Creek Trail extension on Thursday, inc…

Two boys run through the field on their way to pick out pumpkins at Yoder's Farm on Friday, Oct. 9, 2020.

Unwanted pumpkins sit near the entrance to the pumpkin patch at Yoder's Farm on Friday, Oct. 9, 2020.