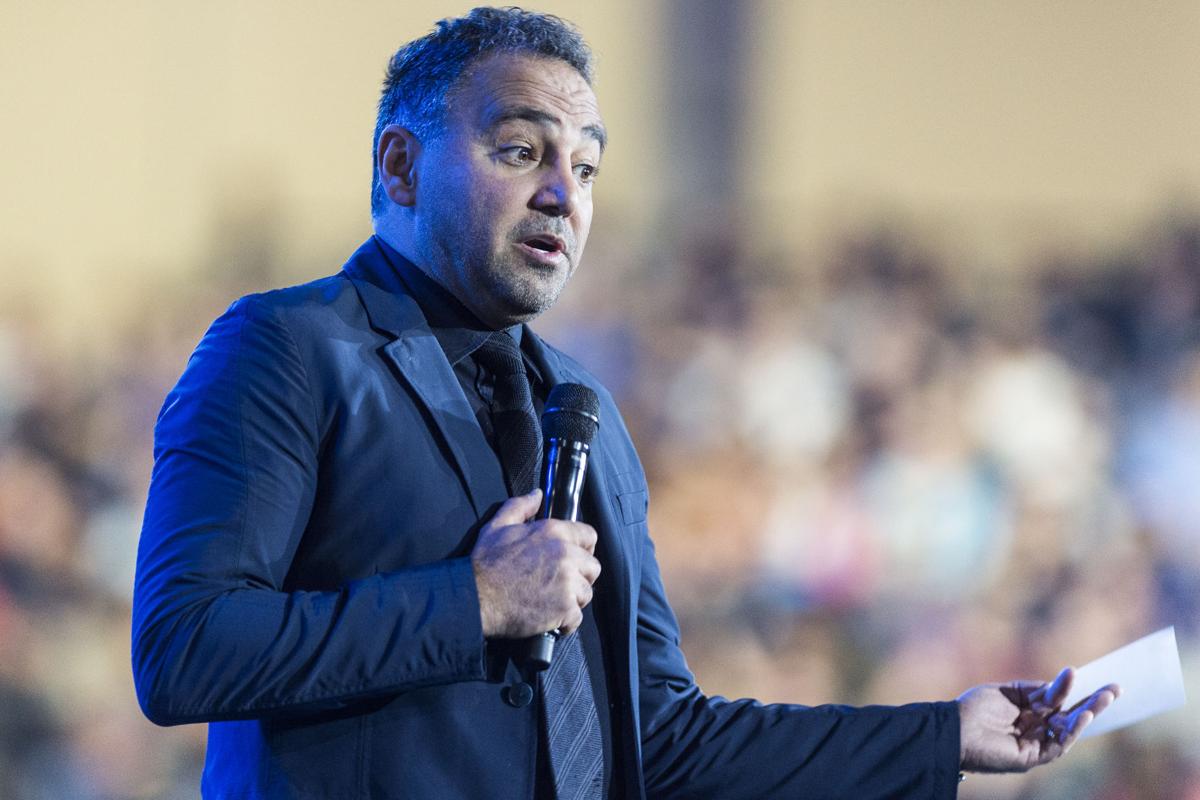 David Nasser, a senior vice president who has led spiritual programs at the religious institution for the past six years, is shown at a Liberty University convocation in April 2018. 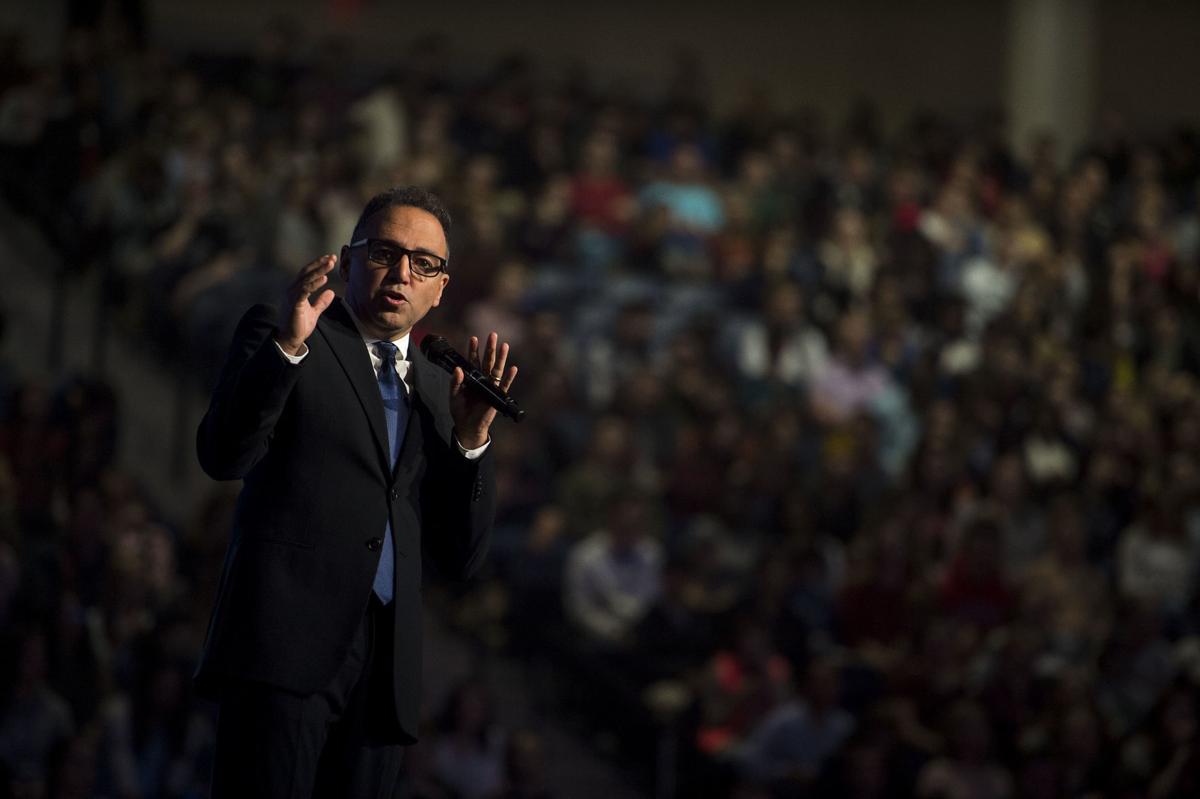 “I know that many of you are hurting and that breaks my heart,” he added. “Your concerns — if you're concerned — are valid. If you're not concerned, you should be concerned.”

Nasser’s comments, which came during the first campus-wide worship service of the academic year, represents the first — and only — public rebuke of Falwell by a current Liberty official since the scandal-plagued evangelical leader submitted his resignation late Monday night.

Falwell, who had been on an indefinite leave of absence since Aug. 7 when he resigned, stepped down after a former business partner alleged he had a yearslong affair with him and his wife, Becki Falwell — a claim the Falwells dispute.

In about an hourlong sermon delivered at Liberty’s Williams Stadium before hundreds of students, Nasser said those concerned about Falwell’s alleged actions are “right to want to see stern and swift accountable action for sinful behavior.”

But he stressed that any accountability must be paired with “extravagant grace and forgiveness.”

“It's okay to call sin, sin,” he said. “You know why? Because it is the only way to actually start to deal with it. It is not love to simply stay in the dark, and not call shameful what God calls shameful. And if we're not willing to stand on that truth, then what in the world are we calling ourselves Christians for in the first place?”

Falwell has repeatedly denied allegations of wrongdoing during his tenure. In a brief interview Thursday, he disputed the suggestion that he had sinned.

"I called Nasser and asked him exactly what sin I committed," Falwell said. "He couldn't and wouldn't answer. He just hung up and now won't answer."

Nasser confirmed Falwell's account in a statement after the initial online publication of this story.

"It is true that Jerry Falwell called me and that I hung up the phone," Nasser said. "The reason I did so was because it quickly became clear that he was not interested in an actual, sincere discussion about his sin. I love Jerry and Becki and would welcome a genuine conversation."

Wednesday’s evening outdoor worship service, known as Campus Community, was the first large gathering of students since the fall semester began earlier this week amid the still-raging coronavirus pandemic.

In a video of the event, the vast majority of the students in the audience could be seen wearing face masks and spaced out at least a few feet from one another. A university spokesperson declined Wednesday to discuss coronavirus-related precautions at the school.

At one point in his remarks, Nasser recounted the departures of several Black staff members who resigned in protest this summer after Falwell posted a tweet invoking Gov. Ralph Northam’s blackface scandal to mock coronavirus-related restrictions.

The tweet, posted in late May, included a racist image of a person in blackface standing next to a person in a Klu Klux Klan robe printed on a face mask in an apparent effort to ridicule Northam’s statewide mask mandate. Falwell later apologized for the tweet after facing stiff backlash and after several prominent Black student-athletes and faculty members left the school.

Nasser said one now-former staffer told him that he felt he could no longer be associated with Liberty after seeing the controversial tweet.

“I asked him to reconsider,” Nasser said. “But after he said no, I also told him that I love him, and that I understood and respected his choice. I believe that he was being obedient to what God was calling him to do personally.”

Nasser’s sermon, which was live streamed to more than 30,000 viewers, was well received by the larger Liberty community, even among longtime critics of the school’s leadership.

“Thank you @davidnasser for apologizing to Liberty students tonight,” Save71, a group of four former Liberty students who had lobbied the school to permanently terminate Falwell, said on Twitter. “Many more of Liberty’s leaders need to do the same. Saying you are sorry is the first of many necessary steps, and we are glad you took it.”

Save71 and other former students have criticized Nasser in the past for actions they argued enabled Falwell’s behavior. For years, students and others affiliated with the university have called on Nasser to publicly and directly speak out against Falwell’s previous scandals.

Earlier in the day, Jonathan Falwell, Jerry Falwell Jr.'s brother and the senior pastor at Thomas Road Baptist Church, delivered his own live-streamed sermon to Liberty students. In a passing reference to his brother's resignation, the younger Falwell acknowledged the challenges students now face, including taking classes during a pandemic and confronting "uncertainty because of change within, even our own campus."

Nasser, in his apology to students, attempted to make clear to his audience that he believed the university is not defined by its relationship to the former president. To make his point, he turned to a phrase often used by the Rev. Jerry Falwell Sr.

“Liberty is more than a college. We are God's college,” Nasser said. “And as our founder always said, ‘If it's Christian, it ought to be better.’ Certainly better than this.”

From the archives: The Rev. Jerry Falwell Sr.

Liberty University tells staffers to stop speaking with Jerry Falwell Jr. while on the job

David Nasser, a senior vice president who has led spiritual programs at the religious institution for the past six years, is shown at a Liberty University convocation in April 2018.