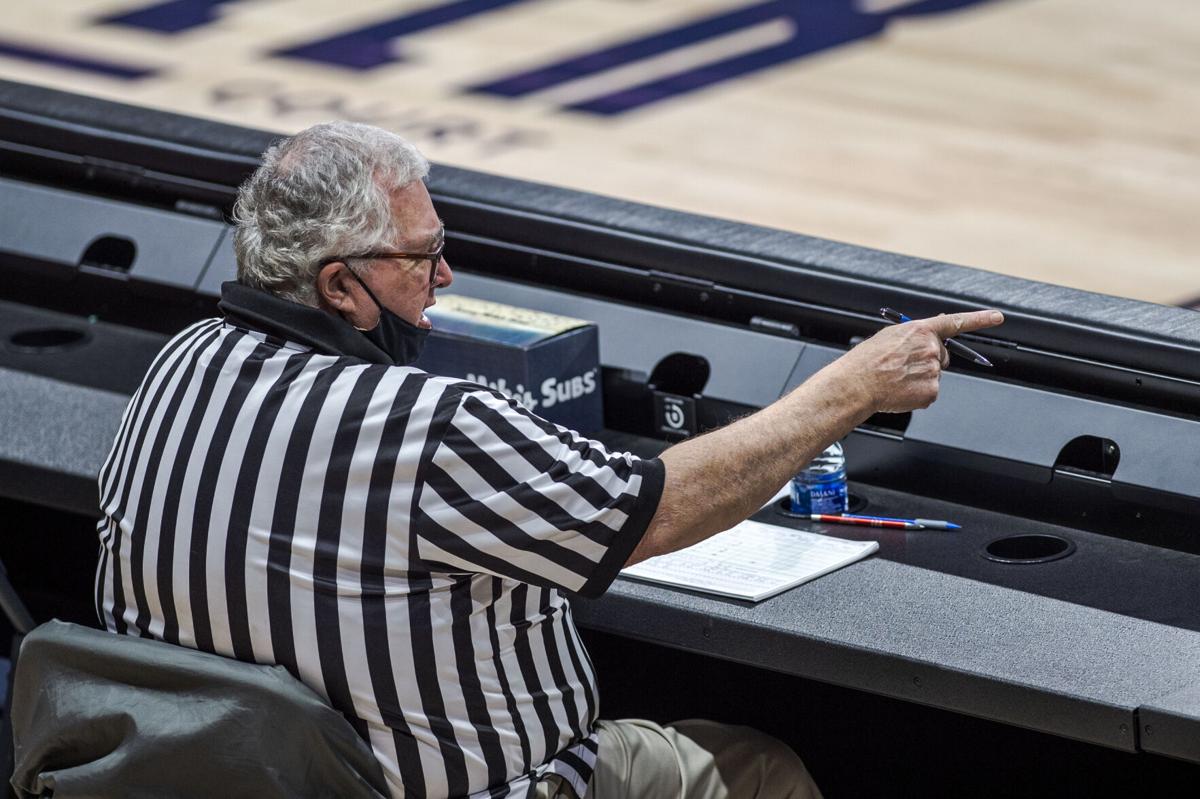 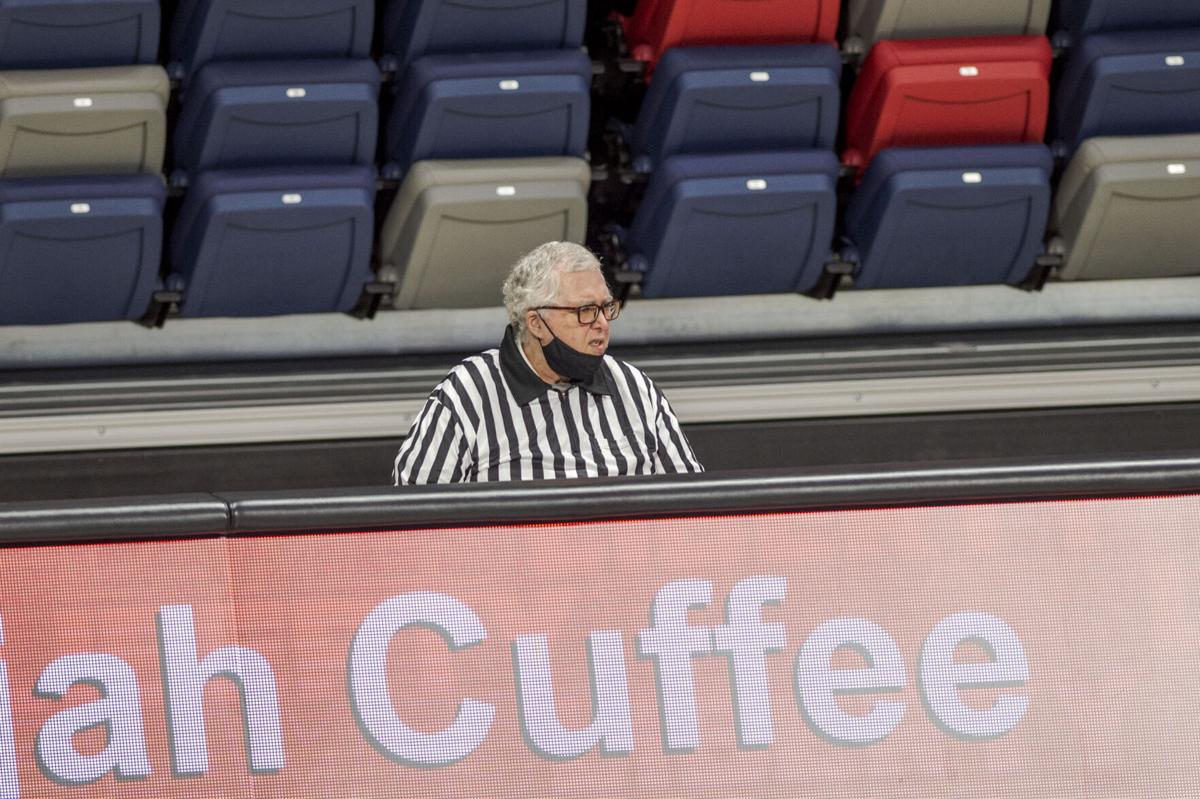 Randy Tschetter retired from teaching in 2016, but he has continued working at Liberty’s basketball games. “I want to keep on doing it,” he said.

High school football games on fall Friday nights or inside college basketball arenas in the winter, with a pencil in his right hand and a notebook or scorebook in his left, Randy Tschetter is in his comfort zone.

Tschetter has witnessed and chronicled thousands of impressive feats since he and his family moved to Lynchburg from Wyoming in 1980. He walked the sidelines for a trio of area high schools and kept meticulous statistics in the fall for more than three decades, and was recently honored by Liberty University for 40 years of keeping the scorebook for men’s and women’s basketball games.

What has left an indelible impact on Tschetter are the relationships he has cultivated over the years with players, coaches and officials. He coached and chronicled the likes of Anthony Poindexter and Jake Grove before they embarked on collegiate and professional careers. He grew close to Liberty basketball players such as Georgie Pacheco-Ortiz, who often chatted with Tschetter while waiting to check into games.

“Just watching those kids and seeing the success that they’ve had, that’s been fun,” Tschetter said.

Tschetter always loved sports and the thrill of competition. He developed an appreciation for numbers and the enjoyment of tallying statistics throughout his 37 years in education, most of which was spent as a mathematics teacher in secondary schools.

Teaching is what brought Tschetter across the country in the first place.

He was teaching at a small Christian school at a Cheyenne, Wyoming, church, and began his master’s classes at the University of Wyoming. However, Tschetter, a Christian, did not like the path on which the secular school was leading him.

“One morning we’re getting ready to go to church and they had Dr. [Jerry] Falwell on the TV and he said, ‘Hey, we need math teachers in the high school,’” Tschetter explained. “Our pastor’s son was a student at Liberty. We knew a little bit about it, so I put an application in and I was able to get the job at [Liberty Christian Academy] and then I worked on my master’s degree at the same time at Liberty.”

Tschetter began his classes when the university was known as Liberty Baptist College, and he initially got into numbers while helping with the statistics at the LBC football games.

It was during this time that Kevin Keyes, a sports information director at LBC, got to know Tschetter and asked him if he would be interested in keeping the clock for men’s basketball games at the Schilling Center.

Tschetter transitioned to keeping the scoreboard the following season.

“I’ve been doing the book ever since then,” he said.

Tschetter had a lengthy past with coaching high school sports in South Dakota and Wyoming. That is where his teaching profession began and, subsequently, went on pause.

His first three years of teaching were in South Dakota shortly after he graduated from a small college that no longer exists. During those three years, he taught full time in addition to coaching ninth-grade football, seventh-grade basketball and varsity tennis.

He recalled his salary being about $6,900, and he was forced to work part-time and summer jobs to pay bills.

“I got burned out in those three years,” he explained, adding he left teaching and went into retail work that led him to Cheyenne, Wyoming.

Tschetter taught at LCA for eight years and assisted the football team under Bob Christmas. Christmas became the head football coach at Jefferson Forest High School in 1988, and Tschetter followed him out there and spent two seasons coaching the lines.

Thanks to the master’s degree he earned at Liberty, he was able to get an administrative job at Forest Middle School. However, he was unable to coach because of being an administrator, and that’s when he and his close friend, Tony Mitchell, started keeping the stats.

Mitchell was a former sports reporter for The News & Advance.

Tschetter helped open the new Forest Middle School in 1994 and he worked there until 1997 when he took a break from education again.

He began working for a company called Valic, which provided retirement benefits to teachers.

It was during a trip to Bedford Middle School to meet with a teacher for an appointment about retirement on Sept. 11, 2001, that Tschetter realized he needed to get back in education.

He stopped close to New London Academy when he heard on the radio of the second plane crashing into the World Trade Center in New York.

“I get there to Bedford Middle School and I’m seeing the teachers and the administrators trying to calm down these eighth graders as far as what’s taken place,” he recalled. “I knew right then and there: ‘Randy, you need to get back into education, be around kids.’”

He went that week to Lynchburg City Schools and was offered a job at E.C. Glass High School the same day.

Tschetter taught at Glass for four years before moving to Amherst County High School, where he taught full-time until 2012.

He helped with tutoring and worked with individual kids on improving their algebra SOL scores until 2016, when he retired from teaching.

He still is keeping the scorebook for Liberty men’s and women’s basketball games, and Liberty has expressed interest in allowing him to keep his position for as long as he wants.

“I want to keep on doing it,” he said. “When they recognized me back in January, I went to Todd [Wetmore, a sports information director at Liberty] and I said, ‘You know, you recognize me for my 40 years, and does this mean it’s my last season?’ He just laughed and said, ‘We love having you and you can keep doing this as long as you can.’”

Randy Tschetter retired from teaching in 2016, but he has continued working at Liberty’s basketball games. “I want to keep on doing it,” he said.