Lynchburg-area officials mum, dismissive of claims militia have acted illegally
Share this
Only $5 for 5 months
1 of 2 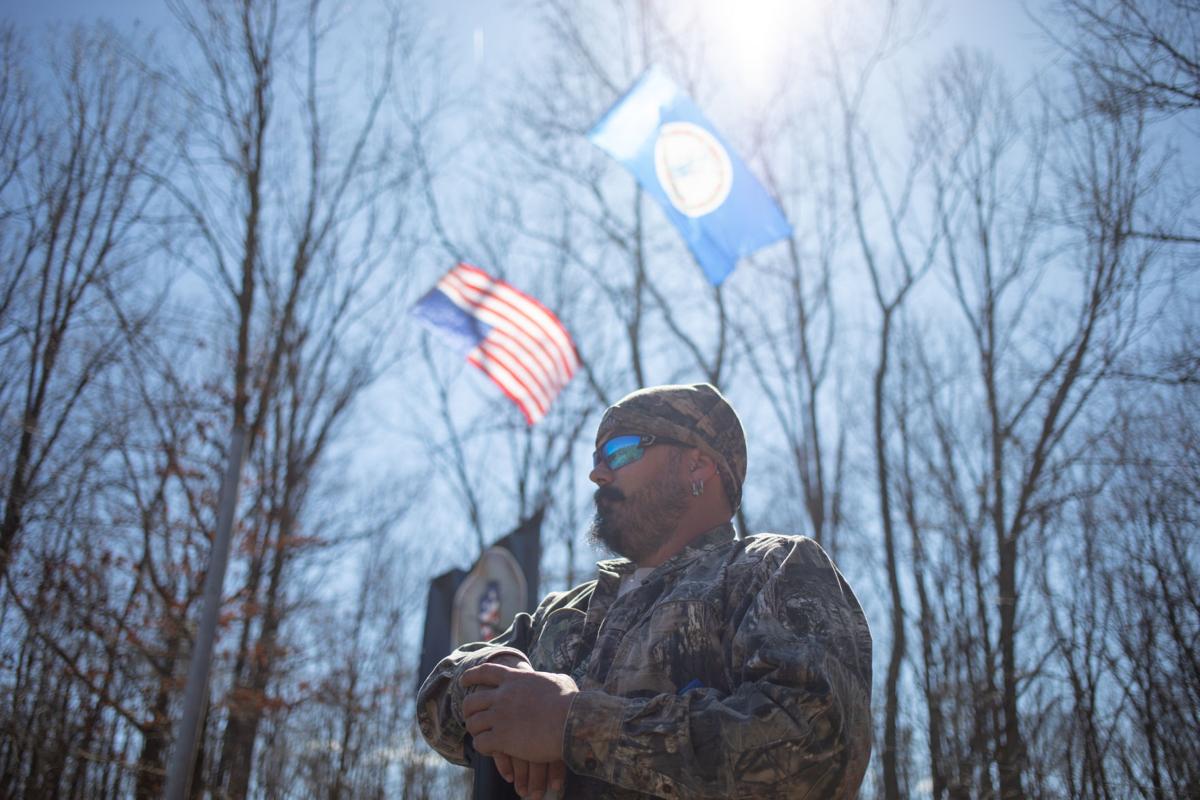 Campbell County resident Al Martin listens during a militia muster call for Amherst County residents to register to become apart of the militia on Saturday, March 7, 2020, at Coolwell Recreation Center. 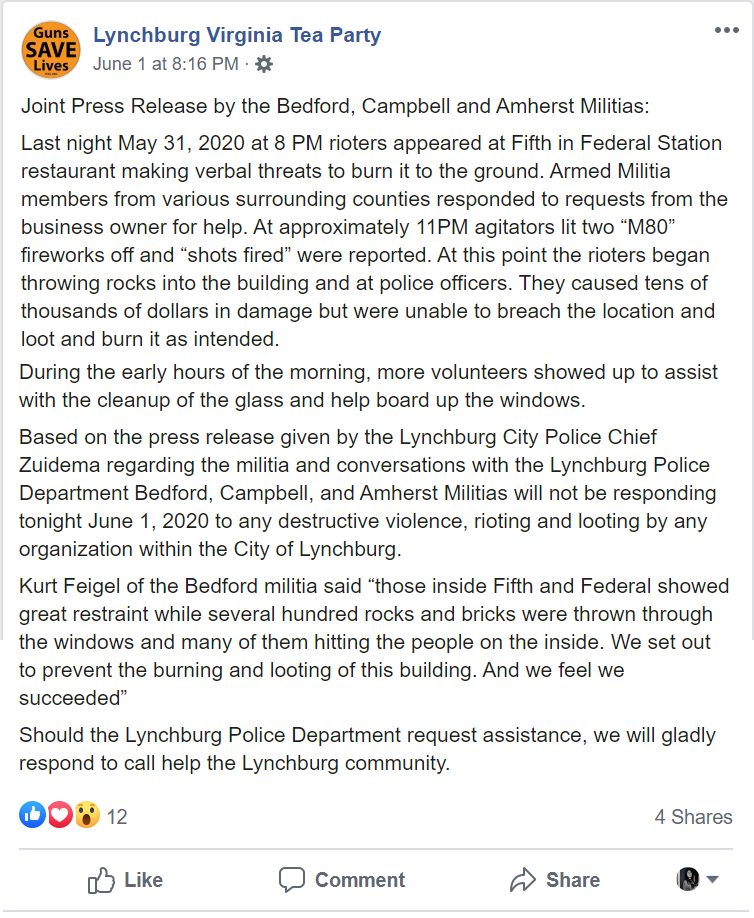 This screencap shows a press release from Central Virginia area militia groups posted to the Lynchburg Virginia Tea Party Facebook page on June 1, the day after militia members went to Fifth & Federal downtown to protect it from looting.

Recently organized Lynchburg-area militia groups are continuing their efforts to grow, undeterred by claims of unlawful activity sent to local officials by an attorney who has worked against other militia groups around the state, including some that were involved in a violent 2017 rally in Charlottesville.

Toward the end of June, more than 50 people registered their names at a muster to organize a militia for Appomattox County. Marty White, a member of the mustering committee, previously found out from local news about letters sent to area elected officials stating recent militia activities violated state laws. One such letter addressed specifically to Appomattox County contended the local militia was poised to violate those laws in its muster, but White wasn’t swayed.

He and others on the mustering committee saw the letter, deemed it a “ridiculous” twisting of the law and decided to hold the muster anyway.

They weren’t the only ones to receive such a letter around mid-June — similar ones went out to Bedford County, Campbell County and Altavista officials. They were penned by Mary McCord, the Legal Director of Georgetown University Law Center’s Institute for Constitutional Advocacy and Protection (ICAP).

She worked as legal counsel for Charlottesville in a lawsuit that succeeded in banning several militia groups that took part in the August 2017 Unite the Right rally from the city. Since then, she’s sent out numerous letters to localities across the country about their militias and regulations of protests.

Some of the letters centered on a local clash the night of May 31, when police said protests turned riotous outside Fifth & Federal Station near downtown Lynchburg and militia members stationed themselves in the building at the request of the business owner with firearms to protect it.

The Lynchburg Police Department still is investigating what happened that night, according to spokesperson Carrie Dungan, and has been in touch with several militia members as part of that investigation. None of those members have been criminally charged, although three individuals involved in the riot were later arrested and charged in connection to the incident. LPD also has been discussing the contents of Georgetown letter with Lynchburg Commonwealth’s Attorney Bethany Harrison, who declined to comment for this article.

Chief Ryan Zuidema has said LPD did not call on the militia that night and LPD has maintained “when we need additional assistance, the LPD is supported by our local, state, and federal law enforcement partners,” according to Dungan.

A news release from area militias posted to Facebook on June 1 — following the civil unrest that erupted after the death of George Floyd at the hands of Minneapolis police — offered aid to LPD, while also stating militia members would stop responding to “rioting” and unrest within the city based in part on “conversations” with the department.

In her letters, McCord told municipal authorities the militia’s conduct that night “appears to have violated Virginia law” regarding the unlawful operation of private paramilitary groups.

“Private militias have no authority to deploy to engage in law enforcement or military functions outside of these carefully circumscribed laws,” she wrote.

One man who responded to Fifth & Federal the night of May 31 was Paul Joseph Cangialosi, a Nelson County resident who is registered with militias in seven counties and said he would “respond to any of them.” He said he found out the restaurant’s owner, Josh Read, had expressed concerns it would be burned down through a mutual friend and went there to “support the owner.”

“Our purpose in being there was to protect private property,” he said in an interview, adding they were a “group of concerned citizens” who weren’t “deployed” by anyone.

The day after Fifth & Federal was damaged, Read said this in response to questions about what brought militia members there:

“I was worried about my safety because throughout the day there was a lot of intense hatred — hateful-type stuff going on, and that’s when I reached out,” he said at the time, not specifying who he reached out to.

Cangialosi said he didn’t personally know Read and was acquainted with five out of 21 people who came to the restaurant that night.

McCord has sent similar letters to localities across the country with mixed results.

“One reason we’ve been going around to send letters is just to make sure that officials and police … know what the law is,” she said in an interview.

In Central Virginia, they were largely met with silence, dismissal, ridicule, the trash or any combination thereof.

Though he hasn’t read the letter, Lynchburg City Council member Jeff Helgeson said he is aware of its contents and contends McCord was “coming to the aid of vandals” by attacking people who want to defend property. He also questioned the credibility of Georgetown Law and called some of the legal claims in the letters “a stretch.”

Lynchburg Mayor MaryJane Dolan, who was copied on a letter, said council hasn’t had a formal discussion on militias, and she is researching the subject.

“I feel like I don’t have enough empirical data to discern exactly what they’re about,” she said.

McCord offered pro bono consultation to localities in each letter, but Dolan said there’s been “no discussion or any interest” in doing so.

Bedford County Board of Supervisors Chair John Sharp referred to the letters as an “insult” and a political move by a “leftist” Georgetown Law professor with “no credibility” attacking people who did nothing wrong.

“They can stay the hell in Georgetown as far as I’m concerned because they don’t know what they’re talking about,” he said. “They weren’t there.”

Bedford County Sheriff Mike Miller said he’s met with local militia leaders twice and is looking into holding discussions with them monthly or every other month. He said they’ve discussed using his department’s incident command structure, through which citizens can help look for missing persons or check on residents after a natural disaster like the 2012 derecho, rather than militia members “self-dispatching.”

When asked about incidences of civil disorder, Miller said his department first calls on law enforcement in neighboring jurisdictions for any assistance they might need.

“Just like with any organization that’s here, as long as we have an open dialogue with someone we can build from that,” he said.

Campbell County Board of Supervisors Chair Charlie Watts said he received a letter but had “no interest in commenting” for this article.

Supervisor Steve Shockley, the only other supervisor to respond to requests for comment, said the board hasn’t discussed Campbell County’s militia since voting to voice support for it in March.

That, and a similar resolution supporting militia in Bedford County, was a point made in McCord’s letters.

Shockley said he’s supportive of the militia and sees them as “neighbors and friends” who offer volunteer support in emergency situations.

“I couldn’t imagine a need right now of a support … when you already have tiers of law enforcement in place all the way up to the National Guard,” he added.

The Appomattox militia group is still in formative stages and White said the group intends to ask for recognition from the county’s Board of Supervisors in the future.

McCord contended that the group is in a position where they could violate Virginia law that forbids firearm or violent conflict training “for use in, or in furtherance of, a civil disorder.” She also cited Virginia’s Constitution in that military groups are “subordinate to civil power” and only the governor has the authority to call upon unorganized militia.

“It’s my firm belief … that the highest civil power is the people of this community; it is “We the people” and that doesn’t refer to bureaucrats and crony capitalists in Richmond and in D.C.,” White said.

Shronda Mosley had a run-in with what appeared to be militia members during a June 7 protest against racial inequality in Appomattox that she said was rife with tension. She said apparent militia members carrying concealed firearms had gathered on the steps of the courthouse in town before the protest was scheduled to be there — contrary to her and other organizers’ intent for a peaceful event.

Law enforcement directed them to leave the walled off courthouse square area for the protest, she said, but she and the other protesters were cautious because they “didn’t want to provoke them.”

“I feel like they’re honestly here to antagonize,” she said. “They’re here to scare people, I think that’s their purpose.”

Mosley also attended the Appomattox militia muster and said she didn’t recognize anyone there from the armed people at the courthouse protest.

The letters from McCord won’t deter the Appomattox militia from future musters or other organizing efforts, White said.

“… I think if Georgetown’s ICAP succeeds in scaring away patriotic citizens from the county militia, then the militias are going to be stronger for not having such weak-kneed patriots as members,” he said.

Campbell County resident Al Martin listens during a militia muster call for Amherst County residents to register to become apart of the militia on Saturday, March 7, 2020, at Coolwell Recreation Center. 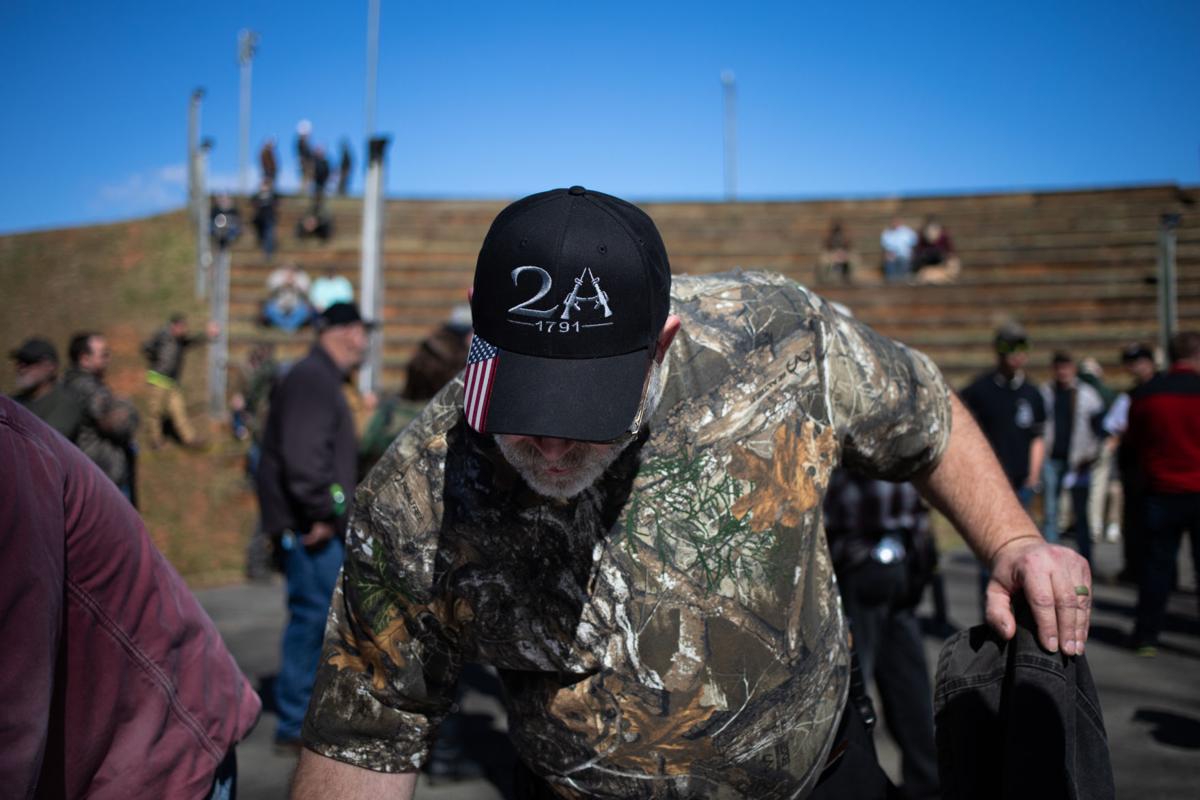 This screencap shows a press release from Central Virginia area militia groups posted to the Lynchburg Virginia Tea Party Facebook page on June 1, the day after militia members went to Fifth & Federal downtown to protect it from looting.