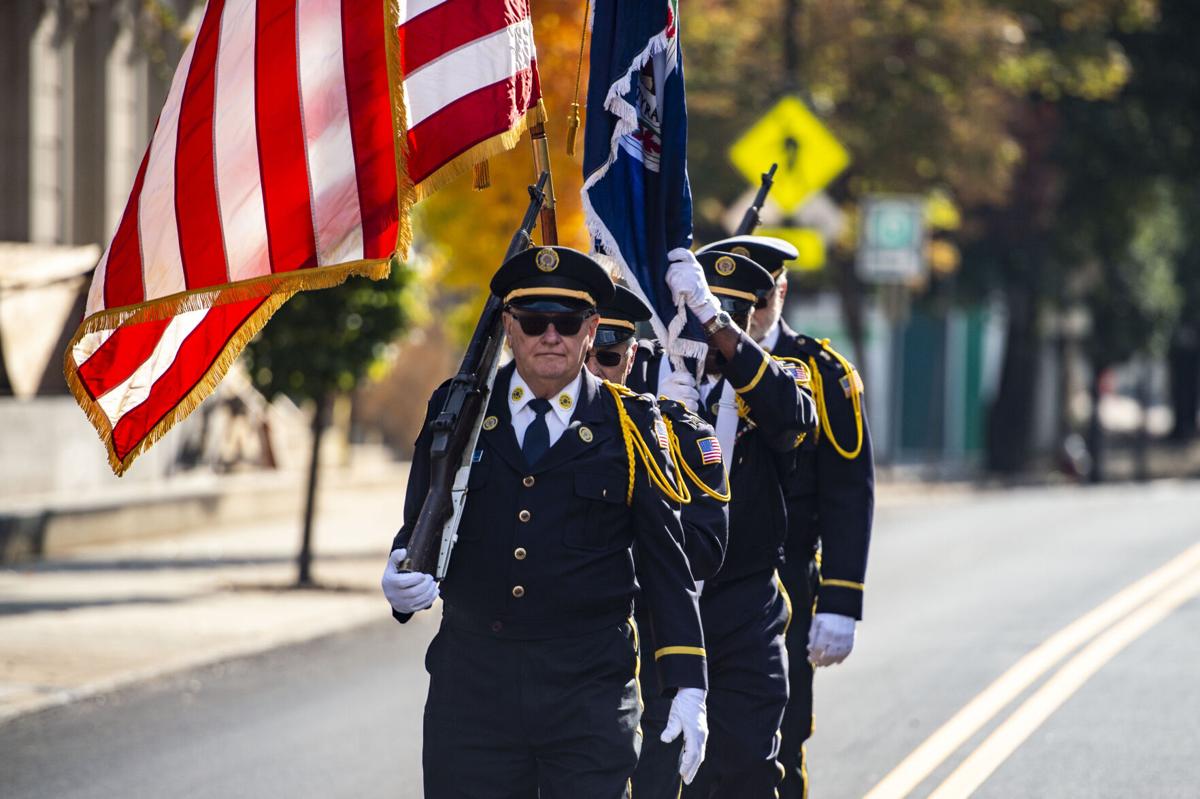 The colors are presented by American Legion Post 16 during a Veterans Day ceremony hosted by the City of Lynchburg at Monument Terrace on Nov. 11. 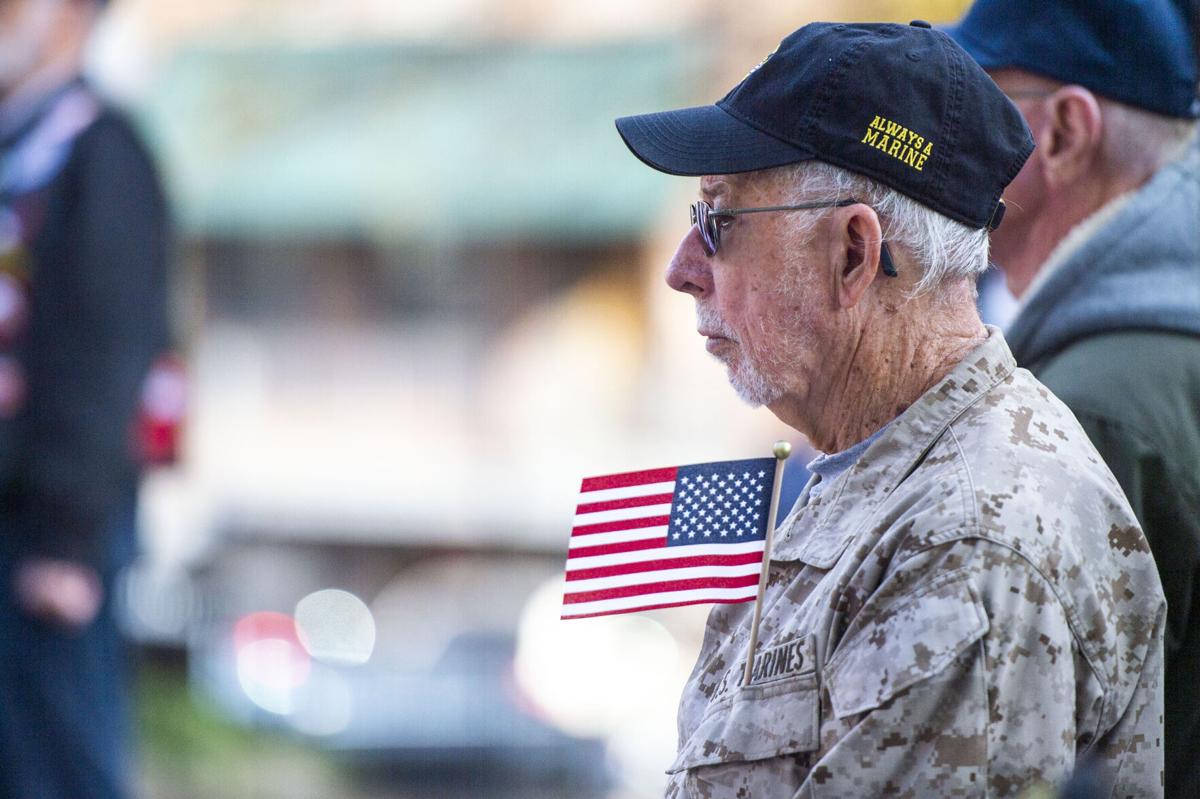 A veteran wears a military uniform with an American Flag in his pocket during a Veterans Day ceremony hosted by the City of Lynchburg at Monument Terrace on Nov. 11.

That’s not just because traffic is moving two ways on that street now. It’s because of a familiar sign, “Honk if u support troops,” that sits out front of Monument Terrace.

Today, Lynchburg-area veterans are celebrating 20 years of the Monument Terrace Troop Rally, showing support for veterans and active-duty service members around the nation.

Rain or shine, veterans from the area flock to the footsteps of Monument Terrace, holding flags along the streets, telling stories of old, enjoying snacks that visitors often bring, or sometimes just basking in the shared experiences of military service.

Alvin Hatter has participated in the troop rally for the last 10 years.

“The camaraderie of the group of veterans is different from any other group that you’ll ever be around,” Hatter said. “All of them have seen some of the same things, and it shows. Most of us also have a uniform belief in God and country, and you won’t find that in a lot of places.”

The brotherhood the veterans share has turned lives around in the Lynchburg area. One example of that is Wayne Souser, who served in the Navy and attends the Friday troop rallies as often as he can to show support for those who helped him out when he needed it.

“I moved here from Roanoke back in May and ended up falling down a bunch of stairs and had to stay a month in Guggenheimer [Health & Rehabilitation Center]. And I didn’t have anything when I got out. I would have been a homeless veteran. But the guys at the [Veterans of Foreign Wars] furnished an entire apartment that I’m living in at the Jefferson House. Then they gave me a 1991 Ford F-150 pickup truck because I had no transportation,” Souser said.

“These guys have been great to me ever since. I would have been another homeless veteran.”

James Grigg, a Marine Corps veteran who has attended the troop rallies for three years, has a special tie to the Monument Terrace ceremony. His great-uncle was killed in World War II and has his name engraved on one of the walls at Monument Terrace. Grigg served on the silent drill team in the Marines. The Silent Drill Platoon is a 24-man rifle platoon that performs the Marine’s rifle exhibit. According to the Marine Corps website, “This highly disciplined platoon exemplifies the professionalism associated with the United States Marine Corps.”

Grigg believes the work that the veteran’s council is doing is spreading over several generations of military members to help veterans that are just now coming home realize they are appreciated by all for their sacrifice.

“What we’re doing in Lynchburg is spreading. I hope that future veterans receive the treatment they deserve, because some didn’t get that,” Grigg said.

Steve Bozeman, vice president of the Lynchburg Area Veterans Council, was at the first rally 20 years ago.

“It started out very innocently, you know, just with the troops but it rolled into one, two, three weeks, then into one, two, three years ... and once we saw the brotherhood of veterans here, spread out over 70 years from World War II to Afghanistan ... we didn’t want to stop,” Bozeman said.

Bozeman’s most memorable Friday troop rally at Monument Terrace was week 900, he said, when the Fallen Heroes Memorial came to Lynchburg and displayed almost 7,000 dog tags representing all the lives that died in the War on Terror since Sep. 11, 2001.

“James Howard served in Afghanistan and was injured later. James is from Lynchburg and created this memorial and to have it displayed in front of Monument Terrace was a beautiful sight where sacrifices of our fallen from Lynchburg was the back drop of those fallen since 9/11. It was very moving,” Bozeman said.

U.S. Rep. Bob Good, R-5th, was at the troop rally Nov. 12, the day after Veterans Day, to thank them for their service.

“It’s an incredibly impressive demonstration of commitment for the veterans, along with family members, friends and patriots,” Good said about the dedication of the troops showing up for well over 1,000 consecutive weeks at Monument Terrace. “That resolve, that love of country, that appreciation for those most deserving of honor, it’s just incredibly impressive.”

Del. Wendell Walker, R-Lynchburg, is a regular at the rallies as well, supporting a group he feels doesn’t get enough appreciation from the government.

“I think the important thing here is that these are the defenders of our freedom and liberty,” Walker said. “It’s the best gift we have. Our priorities are wrong in America, and that’s why I want to stand with these guys as long as we can.”

As for the future, Bozeman said the rallies will continue weekly even though the “so-called wars are over.”

“We still have men and women in harm’s way,” he said. “And the unknown is there as well. ... We think that we will continue with the brotherhood and sisterhood as the Iraq and Afghanistan veterans join the community, and now we’ll have more of them here to support our troops.”

From the archives: Monument Terrace

The colors are presented by American Legion Post 16 during a Veterans Day ceremony hosted by the City of Lynchburg at Monument Terrace on Nov. 11.

A veteran wears a military uniform with an American Flag in his pocket during a Veterans Day ceremony hosted by the City of Lynchburg at Monument Terrace on Nov. 11.