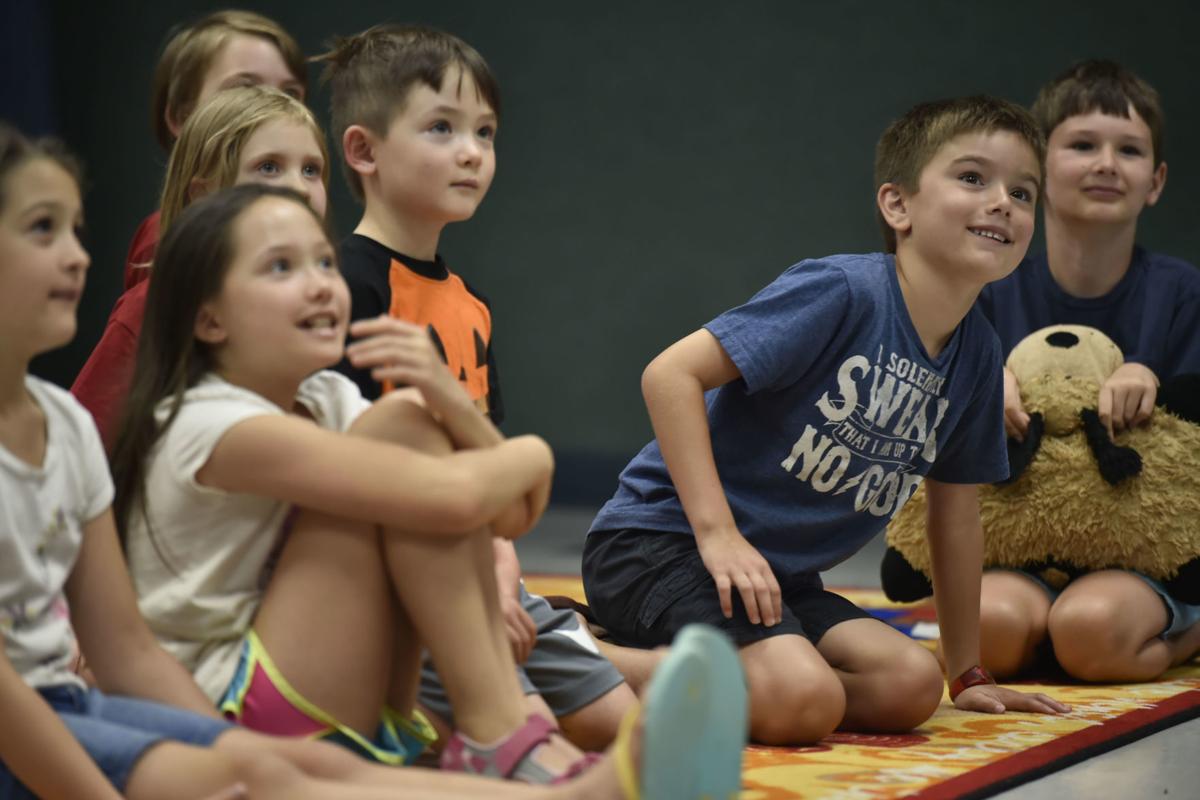 Max Almeida (center right), 8, smiles during a performance by ScienceTeller Kelly Keegan at the Lynchburg Public Library on Thursday. The library offers free lunches for children three days per week during the summer and free programs year-round. 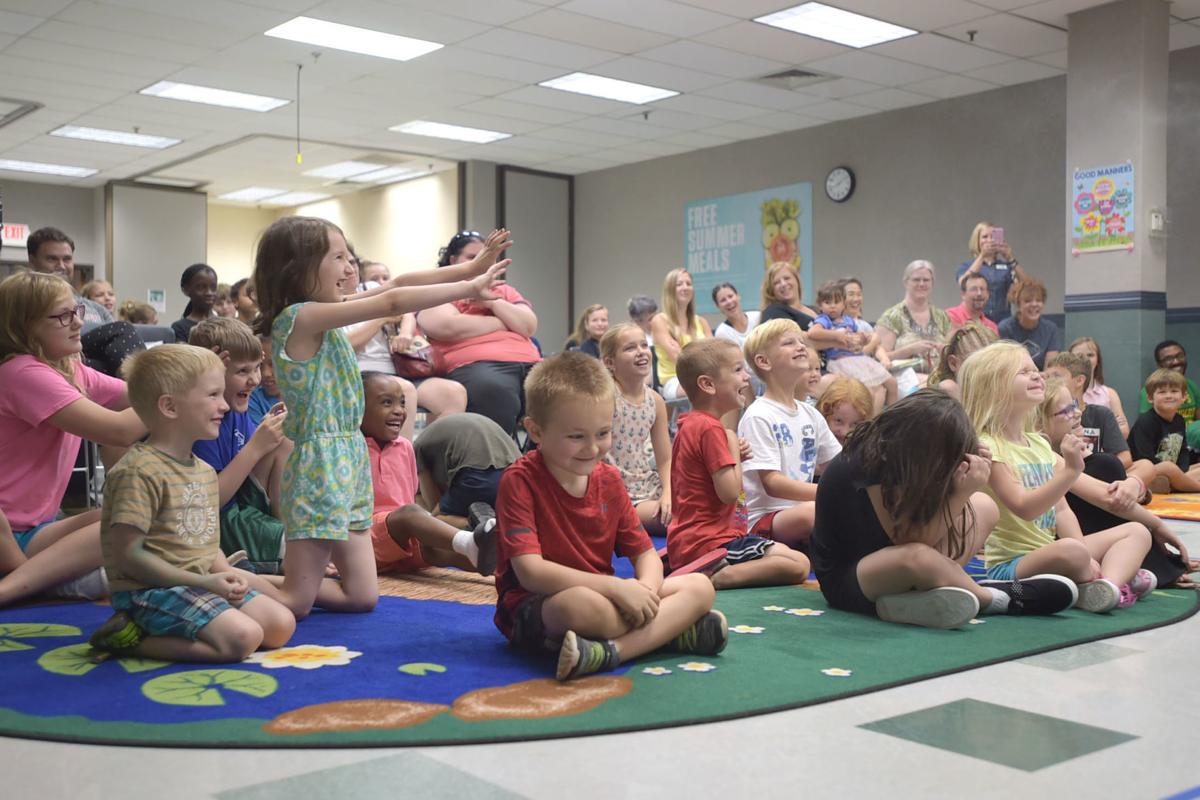 Kids react to being sprayed with water during a performance by ScienceTeller Kelly Keegan at Lynchburg Public Library in Lynchburg on July 11, 2019. 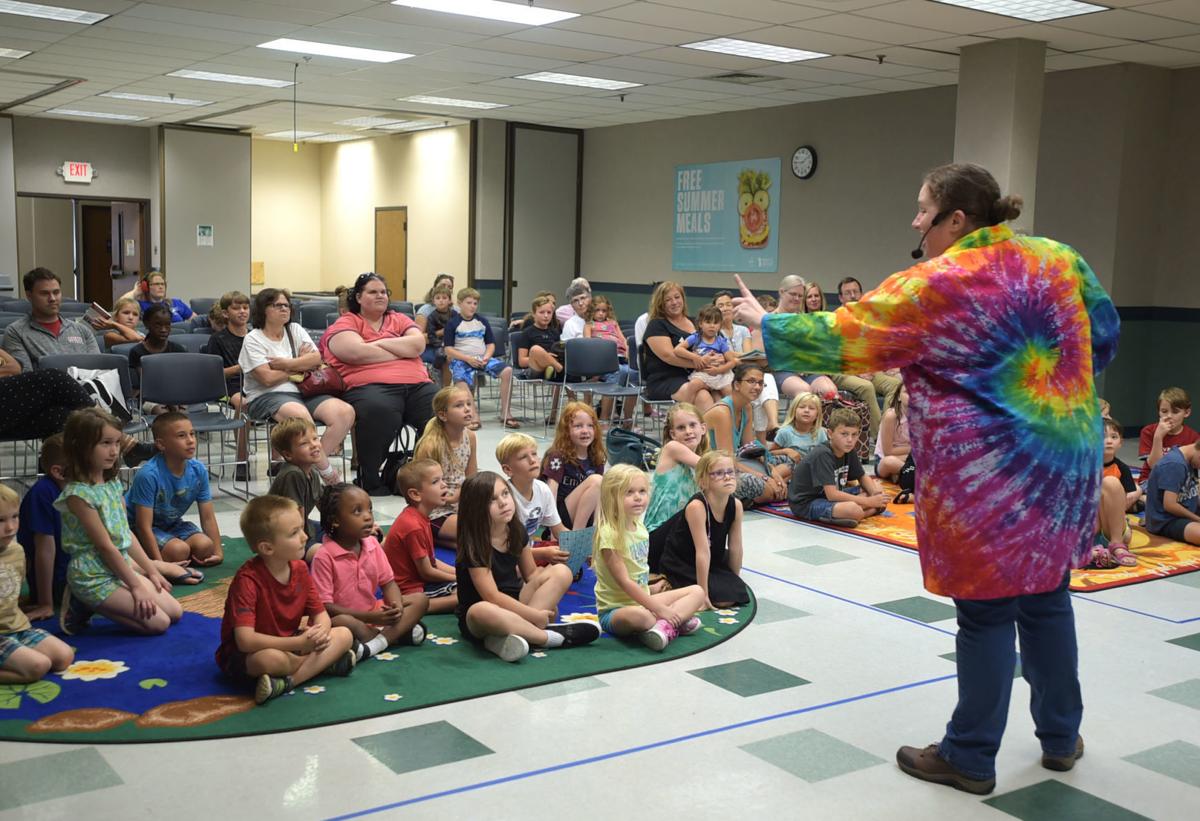 In an effort to put more books in children’s hands, Lynchburg Public Library has eliminated fines for youth materials.

Lynchburg Public Library Director Marilyn Martin said this is a change the library has been considering for years. Fines on a card mean a child clutching an armful of books may not be able to check them out, creating a barrier for low-income families who wish to use library materials.

Overdue fines for materials, including books, audiobooks, DVDs and magazines, are 15 cents per day, and if a patron has more than $5 in fines, their account is suspended. These fines still apply to adult materials but are waived for any youth materials as of July 1.

As the Lynchburg library maintains a free public space within the community, offering free lunches for children three days per week during the summer and countless free programs year-round, Martin said this was the perfect offshoot to continue helping families in need.

The effort goes hand-in-hand with the City of Lynchburg’s current Bridges to Progress initiative working to address the city’s poverty rate, which sits at 23.1% — 9.6% higher than the average national poverty rate.

Martin said despite an estimated loss of about $5,000 in library revenue annually because of the shift in fine policy, the city council and city manager supported the initiative.

Lynchburg City Manager Bonnie Svrcek said she hopes that eliminating fines for youth materials will make the library more welcoming for youth and contribute to success in early education and literacy.

“We know from research that when a child knows how to read at a third grade level there is evidence that the child is likely to be successful in her or his education and beyond,” Svrcek said. “Removing any barriers to this success, including making the library a place that is welcome, contributes to this success.”

Blair said she has watched parents doing double takes when they see the new policy posted behind the circulation desk. She has had parents come in and tell her they hadn’t been to the library in years, embarrassed or worried that fines would not be forgiven, though they now can breathe a sigh of relief.

“It’s our mission to provide free services; we wanted to break down any barriers that are preventing families or children from having access to the library,” Blair said. “We used to even charge to get a library card. It’s important to break down all those existing barriers and ask yourself why are we doing what we do.”

The Lynchburg library has 3,000 youth library cards issued from ages birth to 18. Since June 1 alone, they have seen 26,000 youth materials checked out.

Last summer, the library had a total of 244 children and teens participating in summer reading programs. This summer they already are at 300.

Blair stressed how rare it is to have spaces for children that are free. Now parents have even more incentive to take books home for their children, promoting early literacy and preventing critical educational concerns like the summer slide — a decline in reading ability and other academic skills that can occur over the summer months when school isn’t in session.

Though the Lynchburg library is partners with Campbell and Bedford county libraries, the fines will be waived only on Lynchburg’s youth materials. Martin said the change was not feasible for the other counties at this time, as each county has different funding arrangements.

Other area libraries with similar policies include the Nelson Memorial Library in Nelson County, which along with all libraries in the Jefferson-Madison Regional Library system eliminated fines on juvenile cards in July 2016.

Nelson Memorial Library Branch Manager Susan Huffman said it was a vital change, particularly in helping to promote literacy. She said it only has drawn positive feedback from the community, particularly when children’s picture books are often checked out in stacks, 10 or 12 at a time, causing overdue fees to add up quickly.

Martin said it is crucial children no longer will be penalized for things out of their control.

The Sun may be Earth's mysterious extraterrestrial water source

Aliens? Science experiments? Potato shooters? This and more at a performance by ScienceTellers titled "Aliens: Escape from Earth" at Lynchburg…

Max Almeida (center right), 8, smiles during a performance by ScienceTeller Kelly Keegan at the Lynchburg Public Library on Thursday. The library offers free lunches for children three days per week during the summer and free programs year-round.

Kids react to being sprayed with water during a performance by ScienceTeller Kelly Keegan at Lynchburg Public Library in Lynchburg on July 11, 2019.