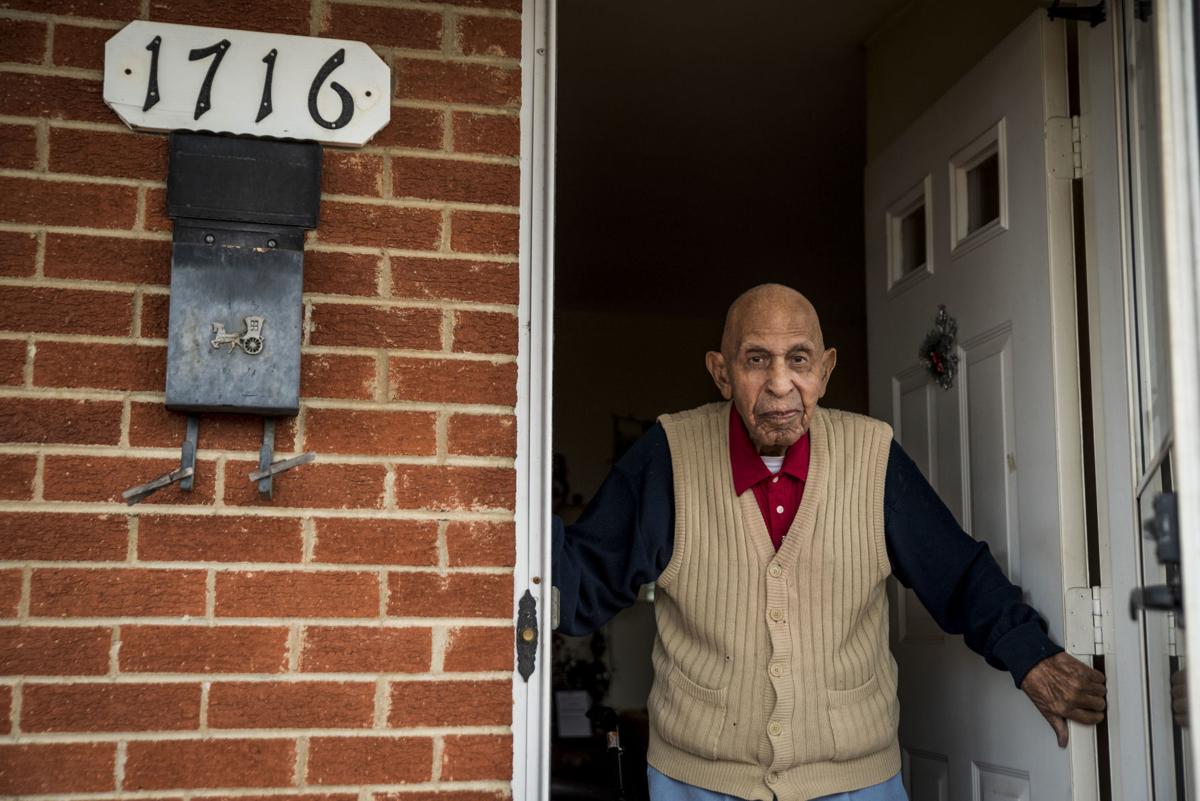 Alfred Farrar, a Tuskegee Airman who is celebrating his 100th birthday this month, poses for a portrait in the doorway of his home in Lynchburg on Dec. 9. 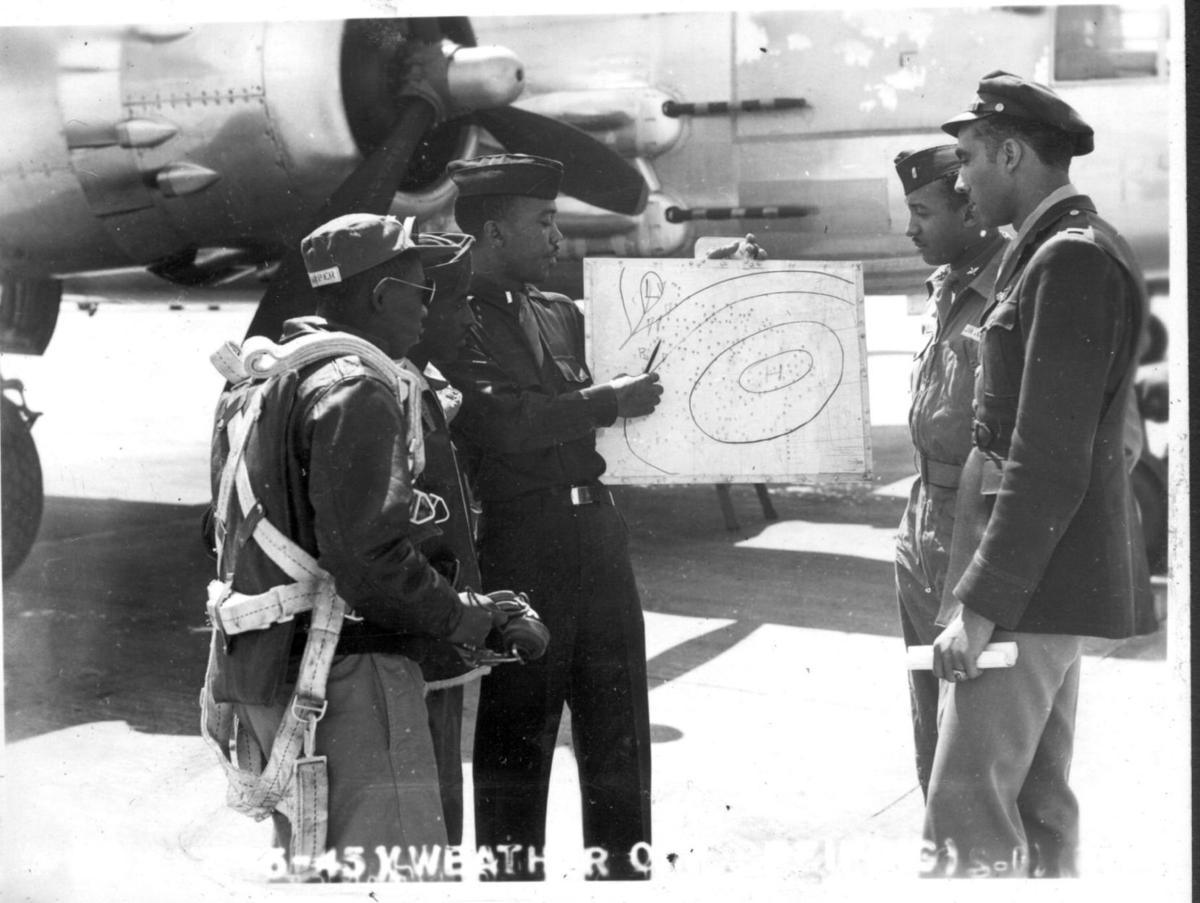 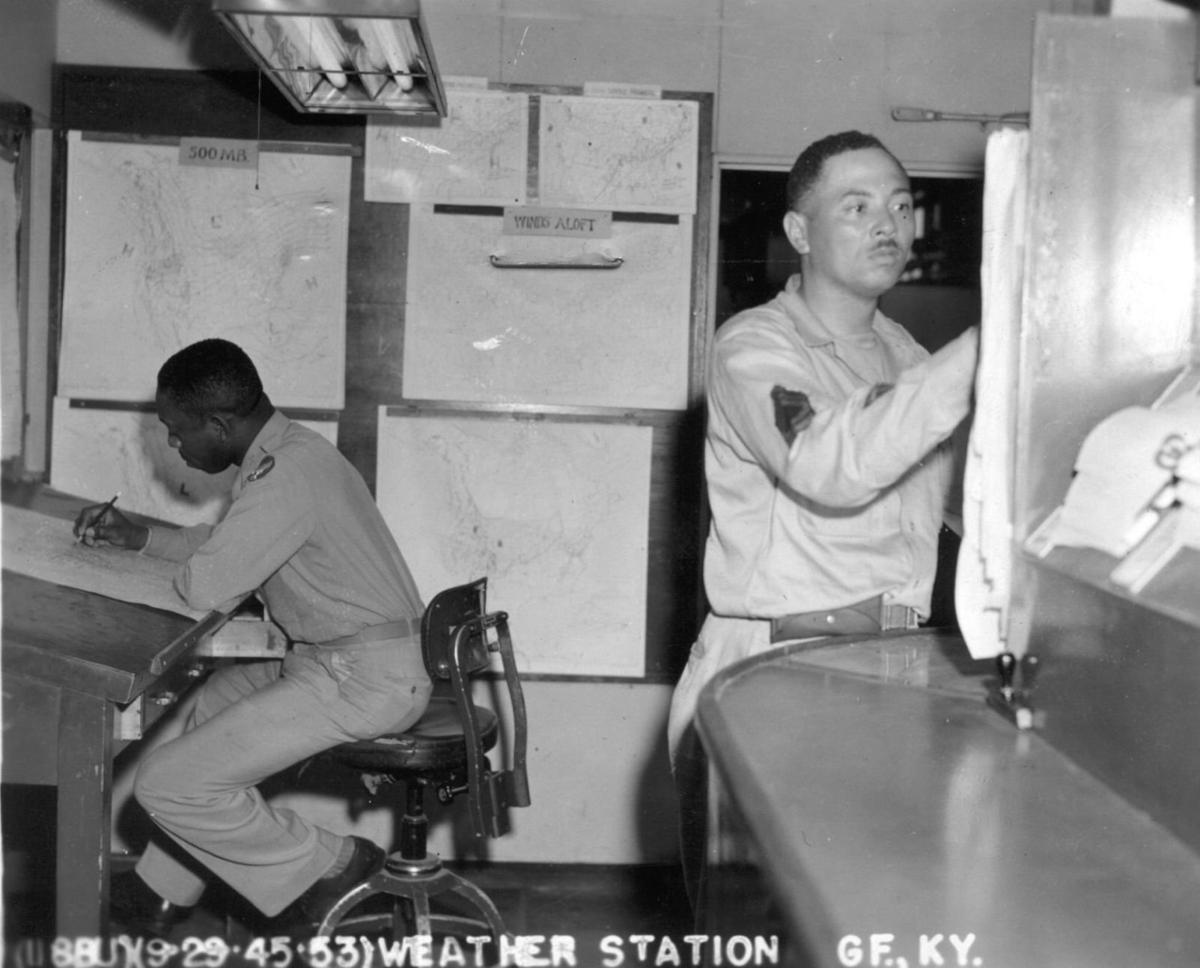 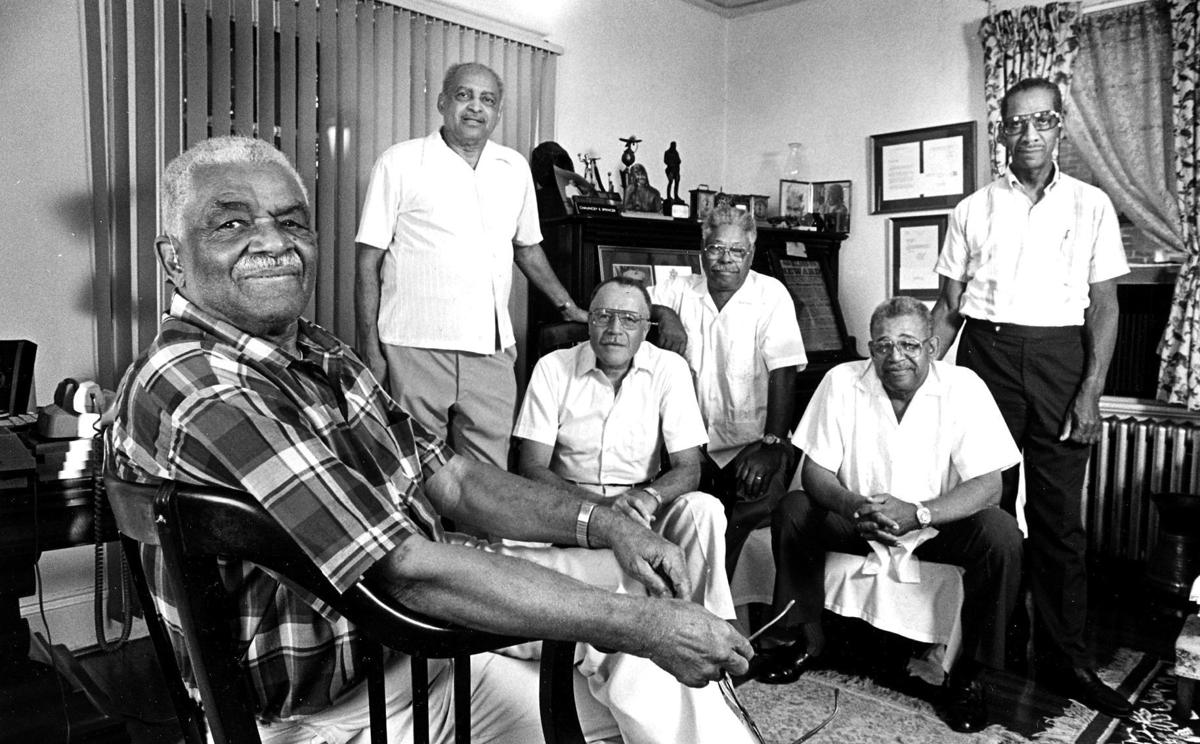 Aug. 29, 1991 - Chauncey Spencer, left, was unable to attend recent reunion of the Tuskegee Airmen, so five of his former comrades made the trip to Lynchburg for a surprise visit. In 1939, Spencer flew a rented biplane from Chicago to Washington, D.C., with fellow pilot Dale White, a flight that inspired then-Sen. Harry Truman to establish funding to train black pilots at the Tuskegee Institute in Alabama.

On Friday, Dec. 18, Alfred Farrar’s son, Roy, told The News & Advance his father passed away, just over a week before he would have celebrated his 100th birthday on Dec. 26.

Just after Christmas Day, a Lynchburg resident and former Tuskegee Airman will turn a century old.

After graduating from Dunbar High School, Alfred Thomas Farrar left his hometown of Lynchburg for Tuskegee, Alabama, where he began training as a Tuskegee Airman. A high school teacher of Alfred’s, Mr. White, notified Alfred of the opportunity and encouraged him to pursue flying.

“It was the next best thing to do,” Alfred said of joining.

Begun in 1941 during World War II, the Tuskegee Airmen were the first all-Black unit of aviators in the American Air Corps, a precursor to the United States Air Force. At that time, the military — like most of the rest of the United States — was still segregated. In spite of racial discrimination, the Tuskegee Airmen proved to be successful and skilled pilots and mechanics, valuable to the war effort.

In training with the Tuskegee Institute, Alfred most remembers learning to fly. Other subjects taught included meteorology and navigation. Alfred did not fly any missions overseas, remaining stateside during his service and rising to the rank of Staff Sergeant before being discharged in 1943.

After his time as a Tuskegee Airman, Alfred lived in New York, where he studied and trained to be an aerospace engineer. His studies led him to work as an engineer with the Federal Aviation Administration where he had a 40-year career, primarily focusing on aircraft engines. Throughout his career, Alfred kept up on developing knowledge and technology surrounding aerospace engineering and engine specifications.

In New York, Alfred and his wife raised their children, Sandra, Roy and Alfred Farrar Jr.

Though Roy was more inclined to languages and arts rather than engineering and mathematics like his father, teaching English to seventh-graders for most of his own career, he credits Alfred for holding him to high standards and teaching him to be a hard, thorough worker in whatever he did.

“He laid the groundwork for some of my perfectionism and hard work, and not walking away from a job until it’s done, or as completed and as well done as possible,” Roy said. “I thank him for that.”

Roy said he remembered Alfred studying diligently to get his aerospace engineer designation, studying material from “stacks of brown folders.”

“He would work relentlessly each night,” Roy recalled.

Alfred’s affinity for math and engineering led Roy to ask him for help with math lessons, which almost always resulted in an entire math lesson beyond the specific problem presented.

“I used to dread having to ask him a question about my math homework, because I was sure to get a too-long lesson in math, and maybe not an answer to my question,” Roy said. “It was very frustrating to get all of that good information about math — which was my worst subject — and come away with no help for the algebra problem that I was trying to figure out where X goes.”

Alfred was a man of few words, Roy said, but was always a positive role model, setting an example of excellence. Roy also learned some practical handyman skills, as he said his father was a do-it-yourself type.

“He’s been a great model for a lot of positive things,” Roy said.

A graduate of Dunbar like Farrar, Spencer learned to fly in Chicago. To prove Black men were as capable pilots as anyone else, he and a friend flew their own plane from Chicago to Washington, D.C., a feat instrumental in convincing Congress to include Black men in the World War II civilian pilot training program, Kubota said.

Spencer was a founder of the National Airmen Association of America and is memorialized in the Virginia Aviation Hall of Fame.

“Lynchburg has been represented by the Black community pretty well in aviation, since its founding, all the way up to space,” Kubota said, referring to astronaut Leland Melvin from Lynchburg.

The exact number of Tuskegee Airmen from Lynchburg is unknown, Kubota said, but one other known Tuskegee Airman named Edgar Doswell — now deceased — also came from the city.

Alfred returned to Lynchburg in 1983 for retirement. He moved back into his childhood home, where he still lives.

“I did the best I could,” Alfred said, a phrase that embodies everything he set himself to in life. “One hundred years is a long time.”

A year in review: Five memorable stories by Shannon Kelly

Here's a look at Shannon Kelly's picks for five stories from 2020 that stand out to her.

A look at 5 of Shannon Kelly's favorite stories from 2020

These sports stories inspired us to persevere.

At noon Christmas Day, the Lynchburg Area Veterans Council gathered for their weekly troop rally, marking the 995th week of the tradition at Monument Terrace downtown, where they honored the life and service of former Tuskegee Airman and Lynchburg resident Alfred Farrar, who passed away on Dec. 17 would have turned 100 years old Dec. 26.

Alfred Farrar, a Tuskegee Airman who is celebrating his 100th birthday this month, poses for a portrait in the doorway of his home in Lynchburg on Dec. 9.

Aug. 29, 1991 - Chauncey Spencer, left, was unable to attend recent reunion of the Tuskegee Airmen, so five of his former comrades made the trip to Lynchburg for a surprise visit. In 1939, Spencer flew a rented biplane from Chicago to Washington, D.C., with fellow pilot Dale White, a flight that inspired then-Sen. Harry Truman to establish funding to train black pilots at the Tuskegee Institute in Alabama.