Madison House of the Arts, at 607 Madison St. in Lynchburg, is launching into the new year with a new vision.

When the founder and former owner of the Madison House retired and moved out of state, the future of the place was rather dubious.

Christopher Townsend, a photographer who toured with professional musicians for many years until COVID-19 hit, and an artist himself who had participated in programs at the arts house for two years, stepped up to both continue the existing mission and expand it.

As its name suggests, Madison House of the Arts began as a place for artists of all formats and walks of life to come together and create, finding an outlet for self-expression and healing. Galleries featuring visual artwork such as paintings, sketches, photographs and sculptures hang on the walls or stand on display in the house on Madison Street. Musicians practice and hold concerts or open mic nights there. Spoken word artists and writers likewise use the space to create and share their work.

Art still is the focus of Madison House of the Arts, but Townsend wanted to incorporate more outreach that not only provided fellowship and a safe space for artists, but that would meet practical needs of the community as well, with efforts such as a year-round food pantry, and providing shoes, feminine hygiene products and clothes to those in need.

“Art has a healing aspect, and the art allowed individuals to come here and find that little piece of healing,” Townsend said.

With the support of Rachel Burns, an investor in the Washington, D.C., area Townsend had reached out to, the Madison House of the Arts was purchased to secure it as a community fixture, and it obtained nonprofit status July 30, 2021.

Now the executive director of a nonprofit organization — a role Townsend had never filled before — he wasted no time pursuing his goals for the organization.

Since last summer, a board of directors comprised of several individuals in the community, primarily mental health specialists and artists, was formed, and already some new programs have launched or are being developed.

Whether an artist is struggling with poverty, addiction, some form of trauma or any other challenges, the Madison House is a healthy place they can go to work through their feelings and find peace.

Madison House of the Arts is a diverse community, bringing together individuals from all over the region. One of the healing aspects is showing people they are not alone in their struggles, and while they may come from different places, they also have much in common.

One of the major hallmarks of the Madison House of the Arts, Townsend said, is its designation as a “sober safe space.”

While the area’s numerous wineries and breweries offer events such as trivia nights, open mic sessions and other social activities, those recovering from alcohol or substance abuse do not find such environments comfortable or helpful, Townsend said. When board members who work in recovery and mental health brought this point to his attention, Townsend wanted to create a place where everyone could enjoy social experiences without alcohol or drugs and the pressure of temptation.

“I think Madison House is a great new energy to the recovery community,” said Jennifer Phelps, a Madison House of the Arts board member and certified substance abuse counselor for the office-based opioid treatment program with Horizon Behavioral Health.

Phelps, herself a painter, has incorporated art programs into her clients’ treatment plans during the past few years, adorning her office walls with work by the artists in recovery. The mission of Madison House of the Arts aligned perfectly with her own efforts. Many of her clients, Phelps said, are naturally artistically inclined, and tapping into that trait has been an effective, helpful tool in the recovery process.

Phelps said she has referred clients to the Madison House, where they can continue pursuing art as a healthy coping mechanism and find social opportunities devoid of substances and alcohol.

Madison House of the Arts’ open jam nights, usually held Monday and Thursday evenings, invites artists to perform music, or come hang out, grab a canvas, and enjoy painting and socializing while listening.

Townsend understands firsthand how important it is to have a support system that fosters healing, especially in relation to mental health and recovery from substance misuse.

When he launched into his work as a music tour photographer, Townsend said he was at “a very low point” in his life. During this low, a Jewish reggae artist took a chance on him and invited him on tour as his photographer. That gesture changed Townsend’s life.

“I spent six years of my life professionally touring with this guy, and he breathed life into me by allowing me to not just tour with him, but be a part of his life. Take photos of his wedding; his kids’ bar mitzvahs. It was the belief in me that changed my life,” Townsend said.

Now, Townsend wants to offer that same opportunity, compassion and support to others through the Madison House of the Arts.

The first program Madison House of the Arts will offer, Townsend said, is a music program.

Geared toward youth, the eight-week workshop will have musicians compose songs and record them professionally in collaboration with The Vinyl Foundry, a music production studio in Lynchburg. Through the course, participants will learn industry-related skills such as marketing while simultaneously serving their community through putting on concerts. Using the arts to serve others is a major component of Madison House’s programs, Townsend said. At the end of the workshop, participants will record a single that will be put on the music streaming platform Spotify. Proceeds raised by the song will go toward promoting youth literacy.

“It’s going to allow youth to be able to not just learn music, but it’s going to be a way for them to serve the community,” Townsend said.

The music program will segue into a filmmaking program, which still is in development.

Programs eventually will be developed to target adults, individuals with intellectual disabilities, and ultimately offerings for everyone. Currently, there are poetry and spoken word nights, in addition to open jam nights for music and painting.

Formal programs aside, the house will be open for community members to come and simply be. To grab a canvas or sketch paper; to write; to practice music; whatever it is they wish to do as they pursue their art and find support and community with one another through their life experiences.

Already, the local community has been stepping up to support the Madison House’s missions with donations of clothing, shoes and nonperishable foods for the community table and upstart pantry.

Some organizations, including the Lynchburg-based UP Foundation, a mental health and recovery support counseling service, plan to work with Madison House of the Arts to optimize each program, combining the services of mental health with the arts to the most effective degree, Townsend said.

He also recently began conversations with the Blue Ridge Area Food Bank about collaborating on a food pantry location within the house.

In addition to therapeutic arts programming, Townsend has visions for the property itself.

He plans to create a mindfulness/meditation garden in the backyard that would be open to the public, aligning with one of the organization’s focuses on promoting and cultivating mindfulness as part of mental health. The walkway leading up to the garden space, Townsend said, is intended to be laid with memorial bricks. The memorial bricks are to serve as a 2022 fundraiser, in which individuals or families from across Virginia can purchase a brick to be engraved with the name of a loved one — specifically if they were an artist — who died of a drug overdose.

“We want these names to be looked at as people, not just victims of their choices,” Townsend said.

Townsend credited his years of touring and working with churches as preparation for his current role as the executive director of an upstart nonprofit.

“It’s been an awesome journey so far,” he said. “I never thought in a million years I would be doing this. I really, honestly believe that my journey led me to this, because the wisdom that I obtained doing what I did during that time prior to this has allowed me to apply it to every aspect of this House, from the management side, to everything. The Madison House is kind of like a giant tour bus with no wheels.”

The Madison House of the Arts team is working on finding and applying for grants to fund some of the developing programs, Townsend said. Donations of clothing and nonperishable foods always are welcome for the house’s pantry and clothes stock, as well as monetary donations.

“That’s a team effort. That’s not a ‘me’ thing. That’s all of us collectively. That’s the community,” Townsend said.

Photos: Artists let out their creativity at Madison House of the Arts during open jam session

“Art has a healing aspect, and the art allowed individuals to come here and find that little piece of healing.”

— Christopher Townsend, executive director of Madison House of the Arts

Glenn A. Trent is one of those Lynchburg names — easily recognizable from the side of tow trucks and from the sign on a 12th Street business.

A Madison Heights man died in a single-vehicle crash in Amherst County early Jan. 18, according to Virginia State Police.

Hospitalization rates for COVID-19 have been fluctuating between 150 to 175 patients in Centra's three area hospitals during the past week.

Campbell County Public Schools will begin giving parents the option to decide whether or not to make their children wear masks during school, …

A man was arrested Tuesday in Lynchburg in connection with the death of his 2-month-old daughter, city police said.

The Lynchburg City School Board voted Friday to continue to mandate masks for students in school despite Gov. Glenn Youngkin's Executive Order…

One dead in Campbell County crash

A collision between a tanker truck and a sedan on U.S. 29 left one person dead Tuesday morning, according to Virginia State Police.

Liberty's Mangino thriving in the male-dominated sport of college basketball

Bolivia releases condor into the wild after being rescued by veterinarians

Bolivia releases condor into the wild after being rescued by veterinarians 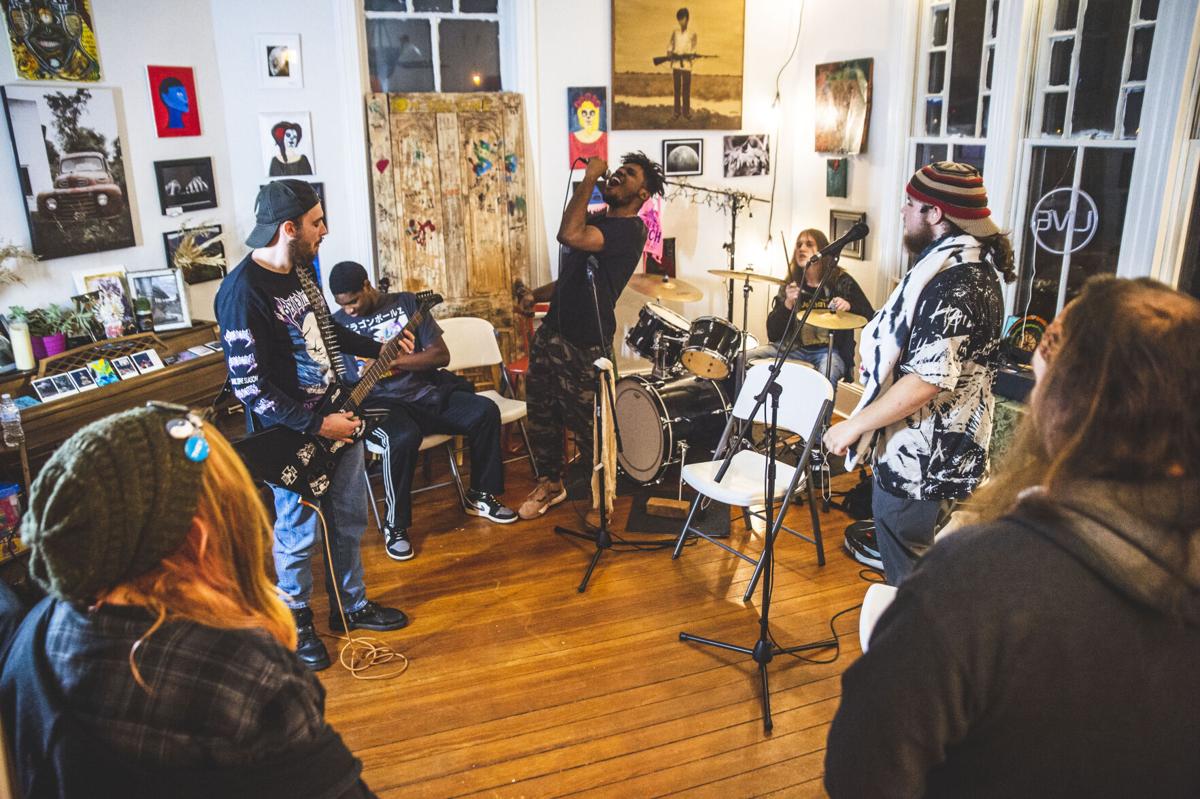 Members of Madison House of the Arts gather round for a jam session in the front room of the house Thursday.

Jaden Brooks hammers away on the drums during a jam session at Madison House of the Arts on Thursday. 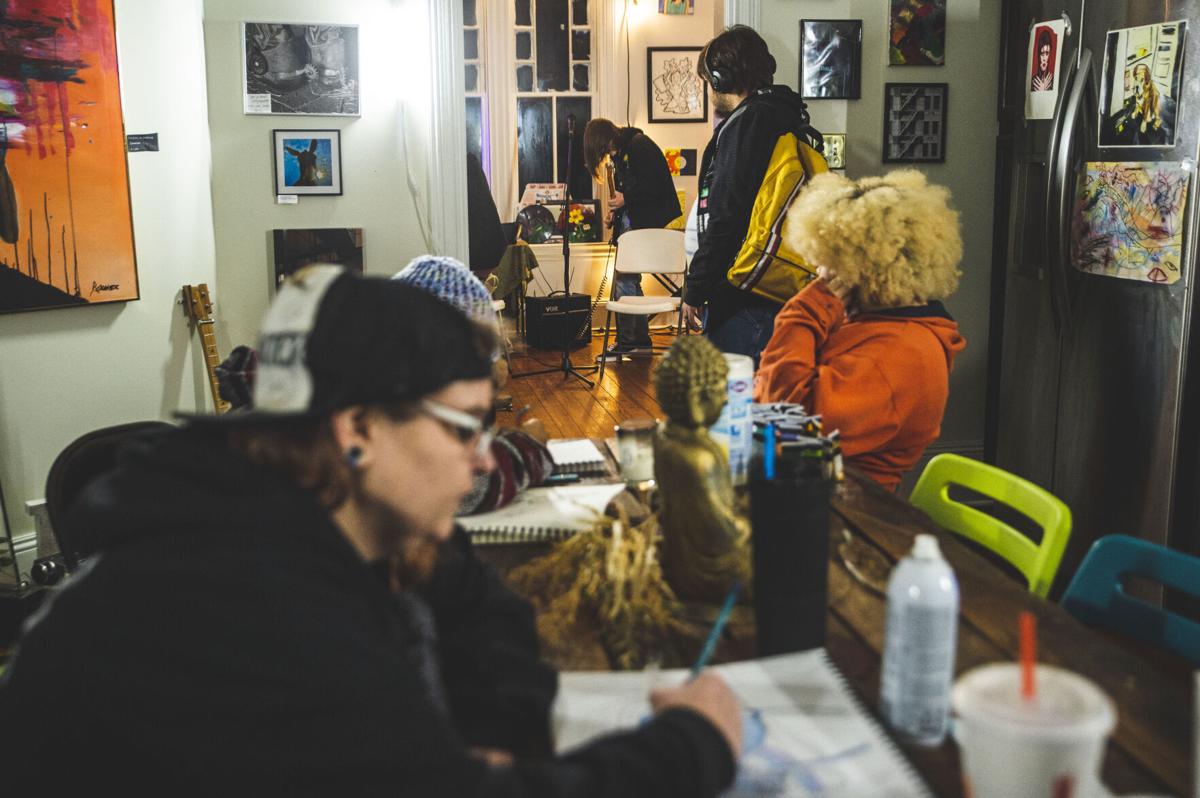 Members make art in the kitchen while listening to a jam session in the front room Thursday. 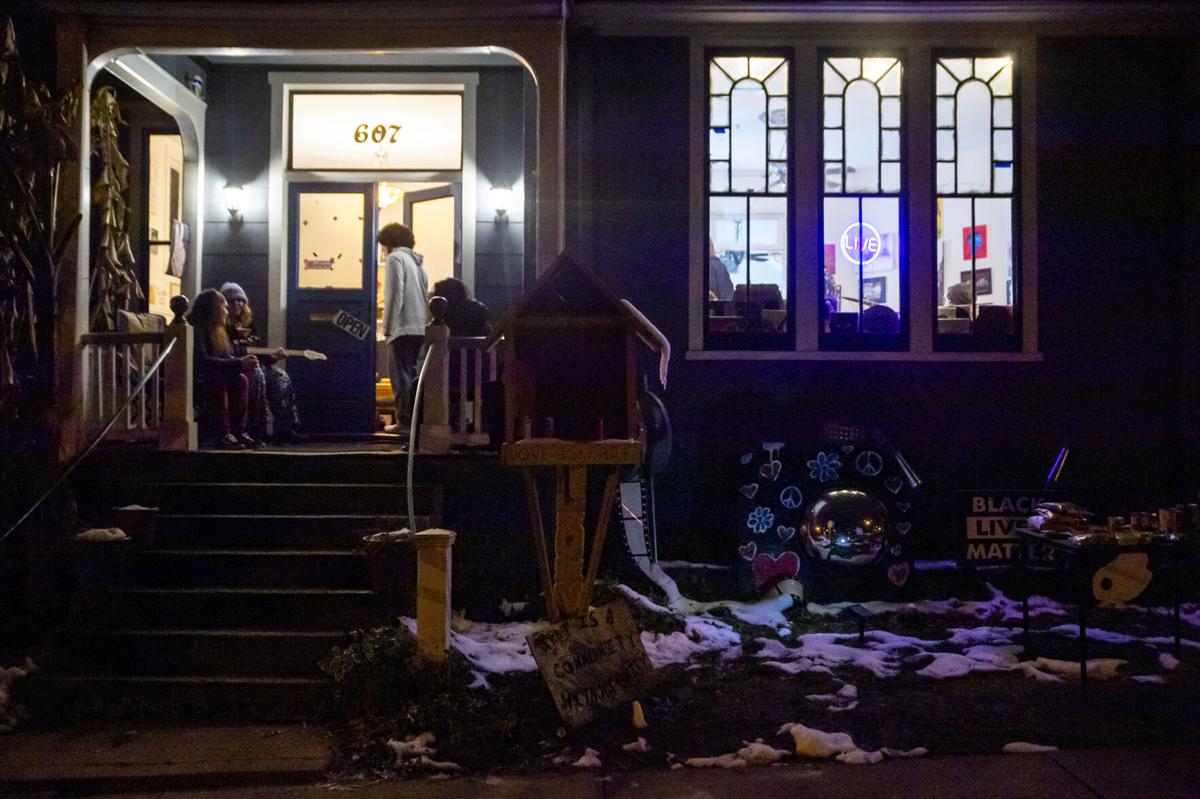 Folks hang out on the porch while a jam session goes on inside at Madison House of the Arts on Thursday. 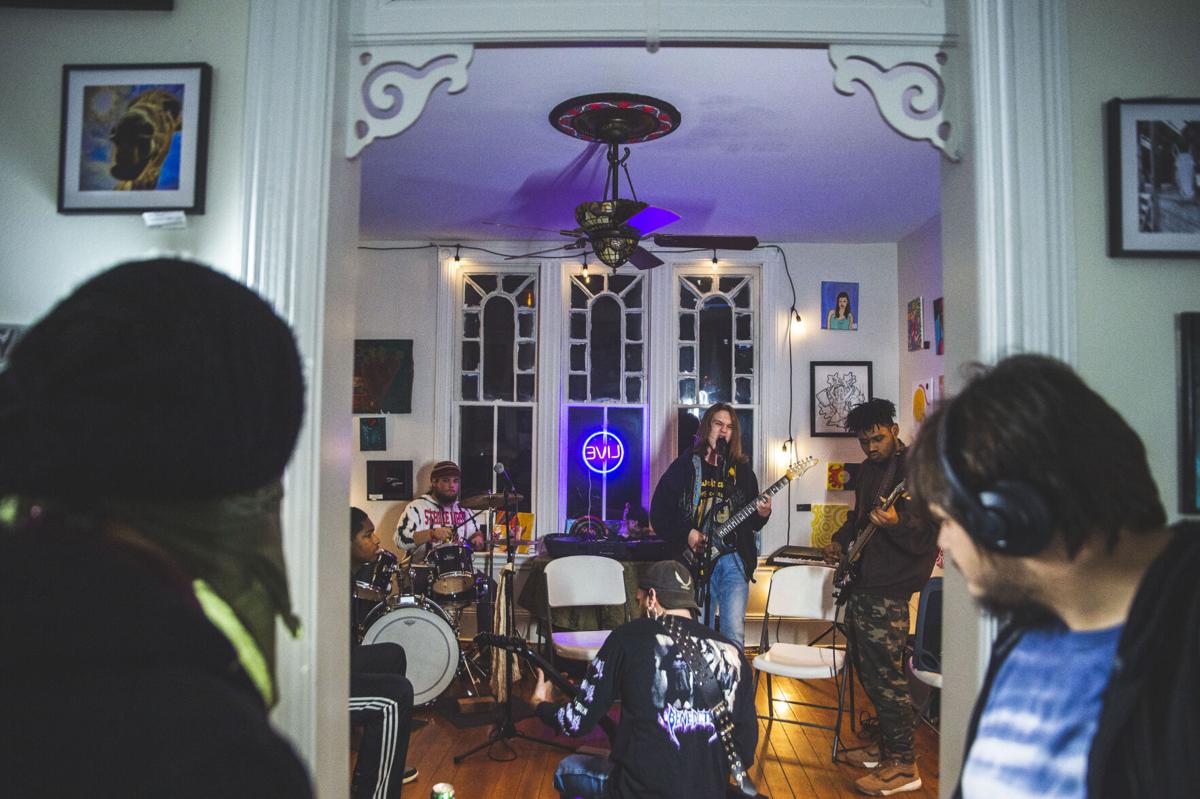 Members watch a jam session from the kitchen at Madison House of the Arts on Thursday, Jan. 6, 2022.