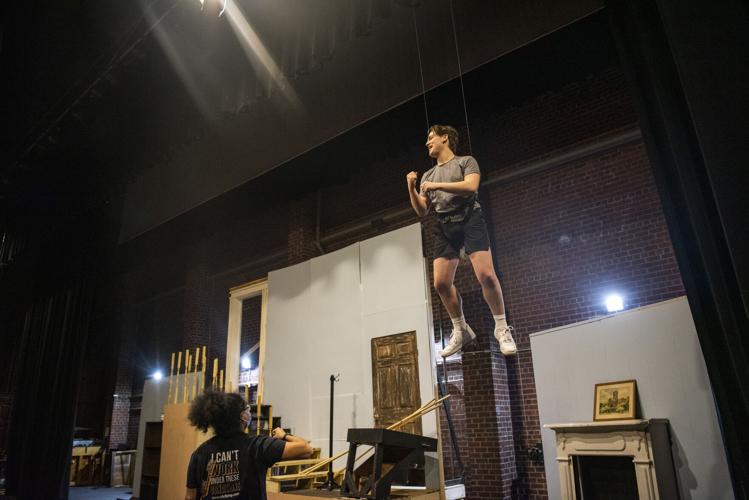 Wyatt Moore, playing the role of Burt, gets comfortable with the harness during rehearsals for “Mary Poppins” at E.C. Glass High School on Friday. 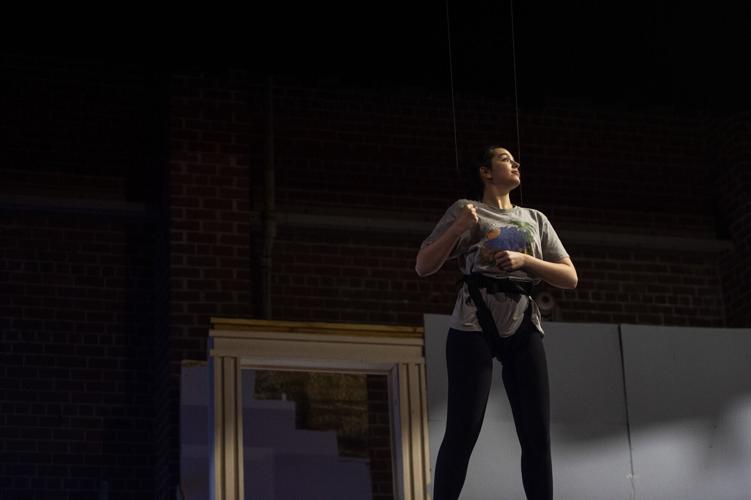 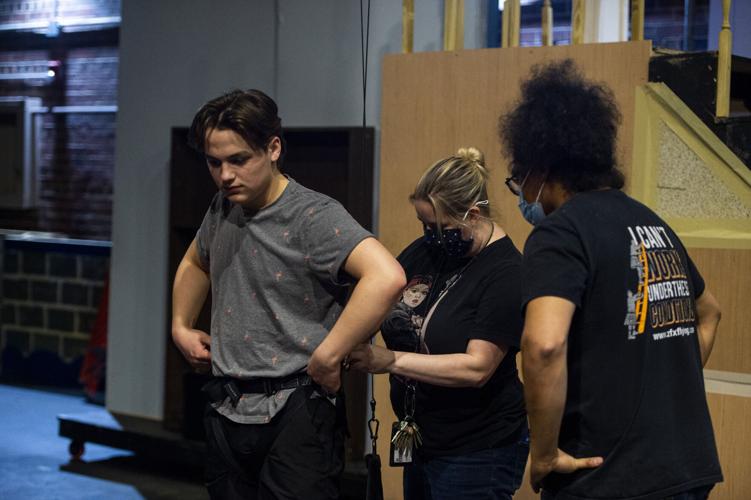 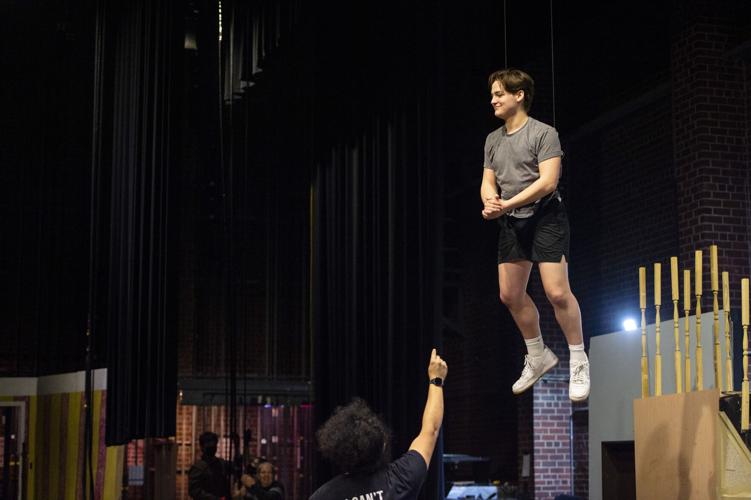 Wyatt Moore, playing the role of Burt, gets comfortable with the harness during rehearsals for "Mary Poppins" at E.C. Glass on Friday, March 25, 2022. 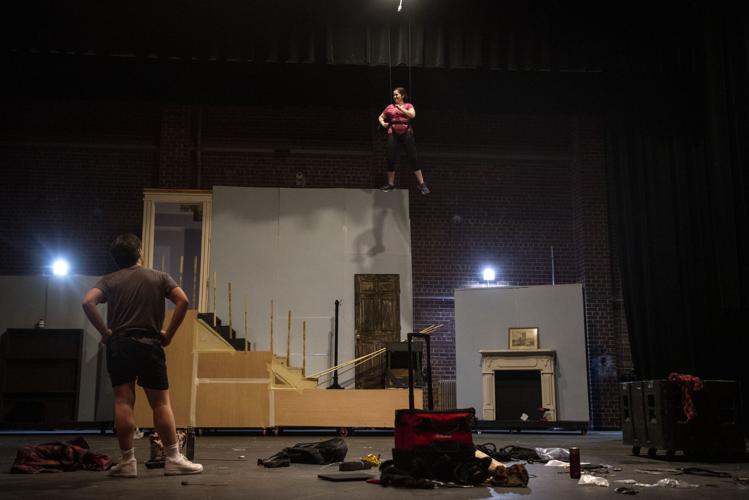 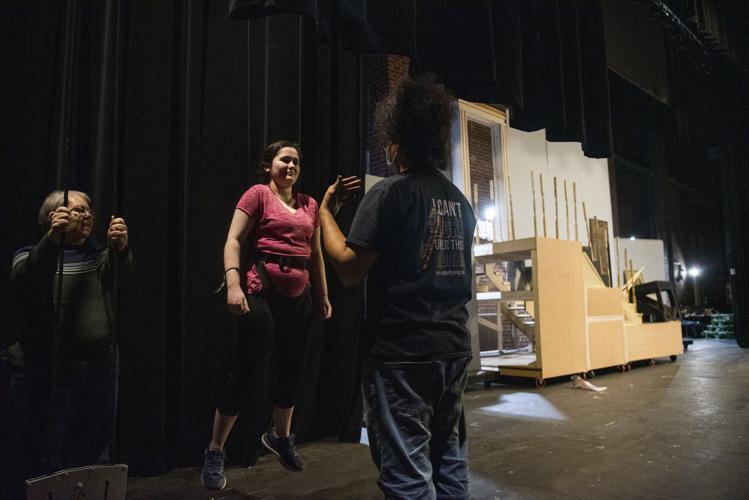 The cast and crew at E.C. Glass High School are mounting a Broadway production, “Mary Poppins,” a beloved classic originally adapted from a book of the same name.

This show is a particularly remarkable feat for the cast and crew members, according to Allison Daugherty, Glass Theatre director and an E. C. Glass High School alumnus. With most actors playing three roles, many learning to tap dance, and learning to fly thanks to training from an out-of-state fly team that traveled into town, new challenges and achievements accompanied the highly athletic, technical production.

“They are hitting every corner of professionality,” Daugherty said of her students. “They’re ensemble members; they’re running with the stage crew, because it’s such a big show; they’re dancing, they’re singing off stage for every single song, full on. They’re on stage playing distinctly different characters. Being a supporting character in this show is like the Olympics for actors. They’re really hitting so many levels of discipline.”

With 26 actors and at least 16 technical crew members, the production is one of the largest Daugherty has overseen in her nearly four years of directing Glass Theatre.

The set, designed by the technical crew and described by Daugherty as “giant,” notably includes a fly system consisting of rails, pulleys and sandbags, and harnesses. With training and equipment provided by a professional fly team, and safety supervision in place, many students learned a new and demanding skill, both from a performer and technical aspect.

“It’s so exciting for everybody, because they’re used to seeing animation and all that stuff, but to actually have the discipline, and the care, and the teamwork to create this onstage — it’s just wonderful,” Daugherty said.

The production was so technically involved that Glass Theatre took two weeks for “tech week” instead of the usual one week finessing and finalizing production work, according to Erin Foreman, technical theater director.

Kentucky-based flying effects provider, ZFX, travelled to Lynchburg to install fly rails in the rigging of Glass Theatre’s ceiling, teach the tech crew how to operate the equipment, and lead three actors in fly training per week prior to opening night.

“For the techies, it’s really cool, because basically they’re making Mary Poppins fly. That’s what attracted me to it, was it was a wonderful, unique opportunity for my tech students,” Foreman said.

Safety — as always — is the top priority.

“We not only make the magic happen, but we have to do it safely,” Foreman said. “We, as technicians, are not just responsible for our own safety. We’re taking the actors’ safety into our hands. Especially when you’re talking flying. We have to make sure that everything is done safely, that the actors can trust that we are going to construct things safely, that we’re going to let them know when things aren’t safe, and that they are comfortable telling us when they don’t feel safe.”

Actors Ella Grant and Wyatt Moore — Mary Poppins and Bert in the production — admitted the prospect of flying was intimidating at first, but both quickly were put at ease and had fun once the training session started.

“We were both a bit nervous, but also crazy excited,” Grant said. “I was very giggly at first. It was a lot of fun for me, just being up that high. It was not as scary as I thought it would be.”

With a team of high school tech students, plus some eighth-graders from Linkhorne Middle School joining in for a taste of what could await them as rising high school freshmen, Foreman said this production has allowed both veteran and new tech students to experience and master more components of theater work than usual.

“Because there are so many opportunities in this particular show, it’s been nice to see the students and their different talents, and see them fall in love with the aspects that tech offers,” she said.

Beyond lighting, sound systems, special effects, and getting creative with making or procuring props and set pieces, this production required new levels of ingenuity. Every set piece is on wheels, for instance, and scene changes had to be specially choreographed, Foreman said.

Grant and Moore said, especially in relation to the set operations, spatial awareness and close attention was key to a safe and smooth performance.

“If you’re not paying attention, or if you’re standing in the way, it can mess up the show, but it can also be really dangerous. Even when you’re not on stage, if you’re just hanging out backstage waiting for your scene, you just need to be ready to help move something, or get out of the way if you need to, or help another actor,” Moore said.

The tech process is one of creative problem-solving and collaboration, Foreman said, especially in a production that requires so much magic to happen live on stage.

“For example, during the kitchen scene, the whole kitchen has to fall apart and then come back together magically. So, it’s not just building a set, and it’s not just being able to move a set, but it’s also being able to figure out who’s running the magic, and how the magic is going to happen,” Foreman said.

Moore, who got into acting during elementary school, said this production is “definitely” one of the most technical shows he has ever done.

Grant, whose acting career started with a kindergarten show, agreed, and said she anticipates the “high caliber” performance is one audiences will enjoy.

The “soulful,” moving story of Mary Poppins offers something for people of all ages, Daugherty said. Her own self-described “misperception” of the classic being mainly for young children was shifted.

“It’s a deep, beautiful, touching, moving show for all ages,” she said. “It’s about kind of a fractured family, in some ways, and it’s about the adults and the kids who needed to find their childhood joy again, and Mary comes in like an angel and kind of fixes them.”

Keeping with Glass Theatre’s tradition, one performance of the show will be interpreted in American Sign Language to make the experience accessible to the deaf and hard of hearing. A major turnout is projected for the evening of April 2: two weeks before opening, at least 60 tickets already had been sold for the ASL-interpreted performance, Daugherty said.

Mary Poppins opens Friday, with performances through April 9. Tickets and more information are available at: ecgt.booktix.com.

After seven years, lovers of Mitchell’s fried chicken will be able to get their hands on it, as well as steak, grilled chicken and salmon, at …

After a former Liberty University official sued the school for what he alleges was unlawful termination, the university this week sought to ha…

After Sunday announcement, Taylor says he will reconsider withdrawing from Lynchburg's finance committee

Wyatt Moore, playing the role of Burt, gets comfortable with the harness during rehearsals for “Mary Poppins” at E.C. Glass High School on Friday. 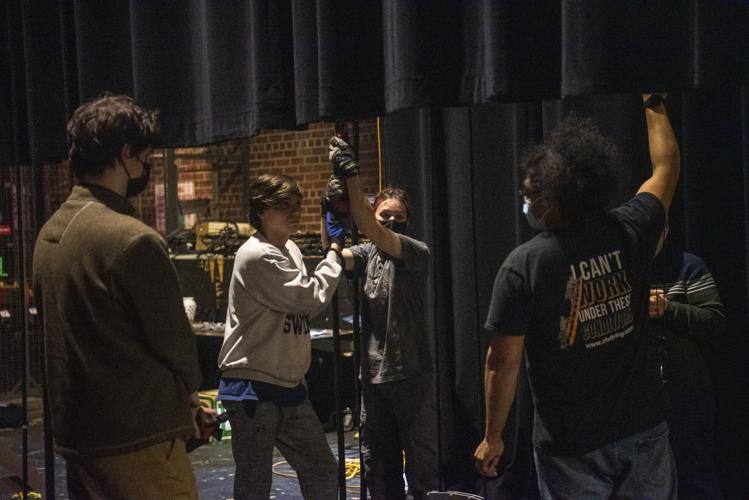 The stage crew gets directions on how to use the pulley system for the fly harnesses during rehearsals for “Mary Poppins” on Friday. 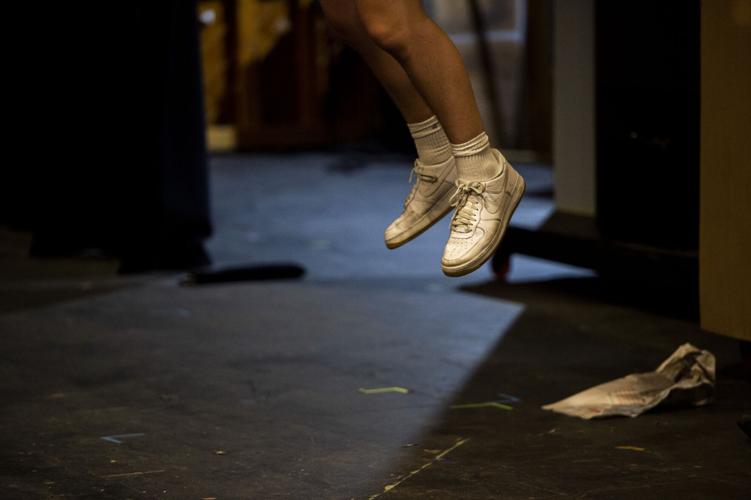 Wyatt Moore, playing the role of Burt, is lifted off the stage while getting comfortable using a fly harness during rehearsals for "Mary Poppins" at E.C. Glass High School on Friday, March 25, 2022.

Wyatt Moore, playing the role of Burt, gets comfortable with the harness during rehearsals for "Mary Poppins" at E.C. Glass on Friday, March 25, 2022. 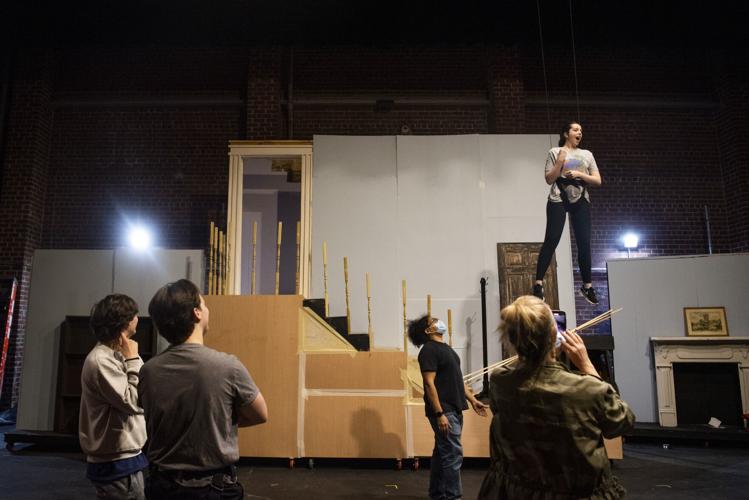