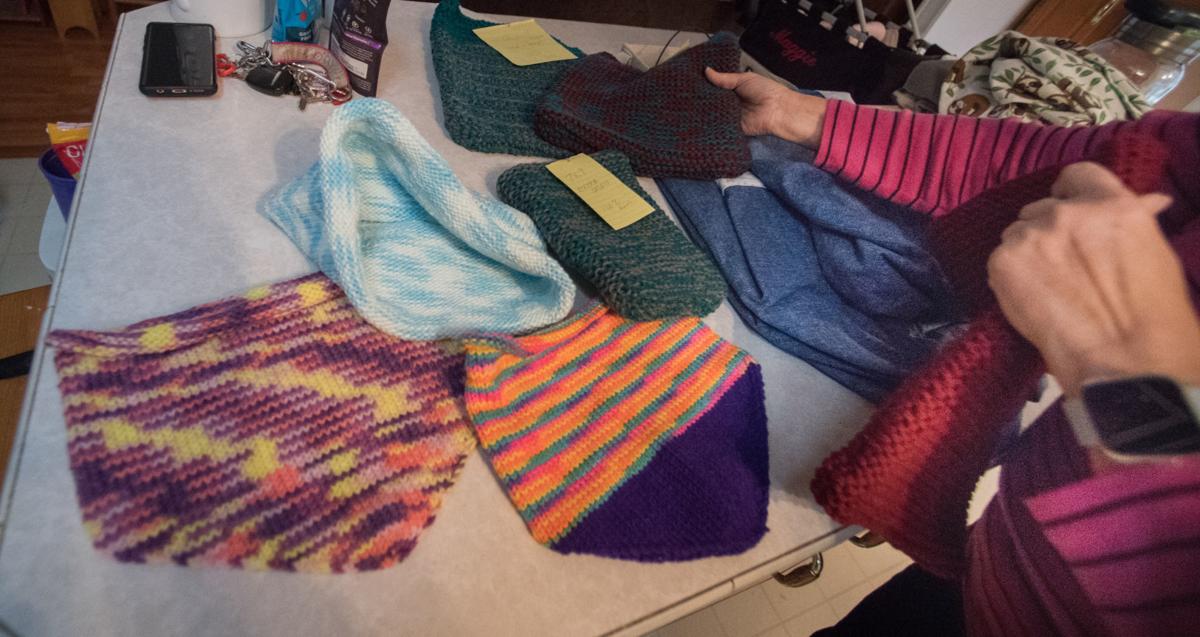 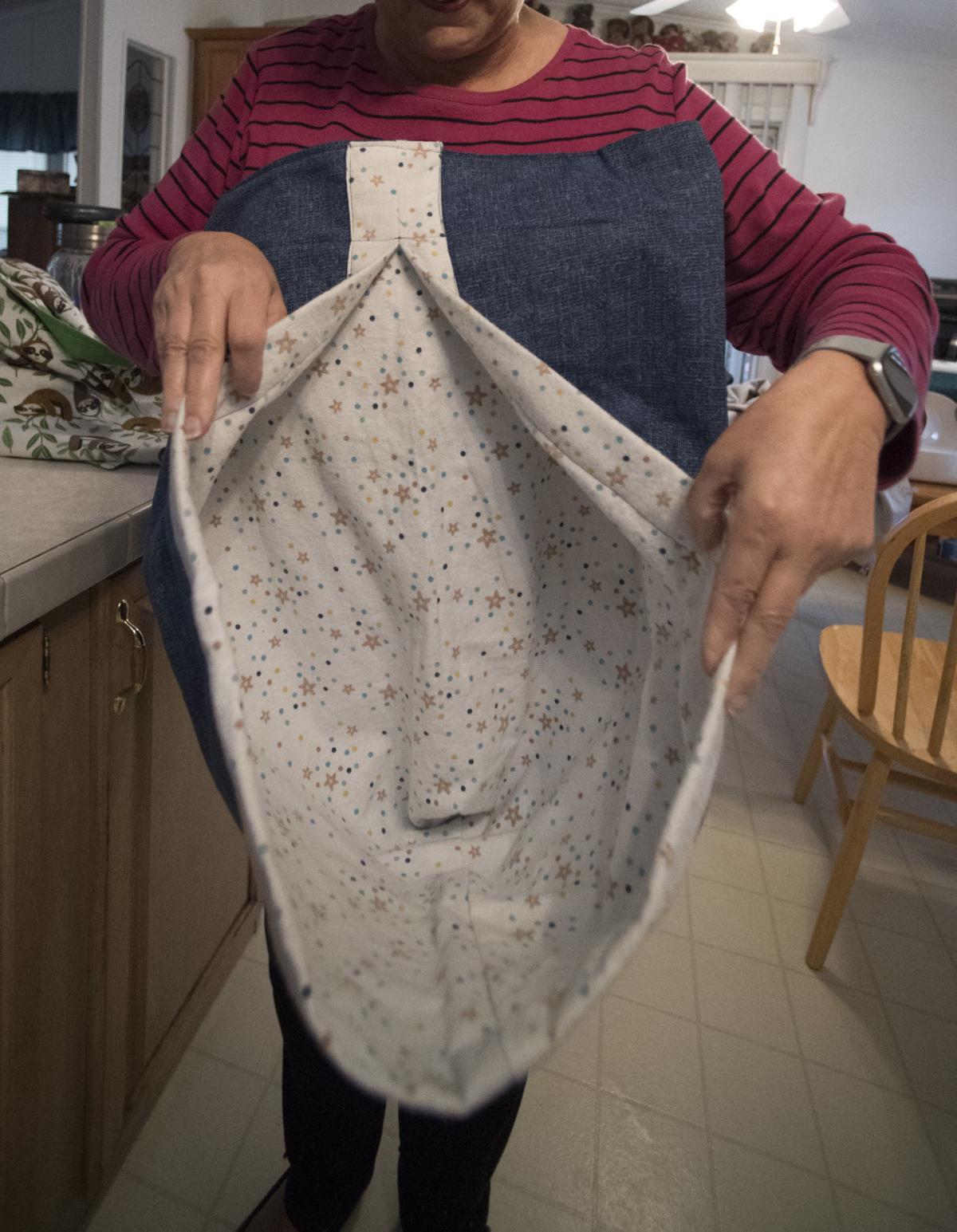 Pollard holds a 3D Joey Pouch that a baby Kangaroo will get in for comfort.(Photo by Lee Luther Jr.) 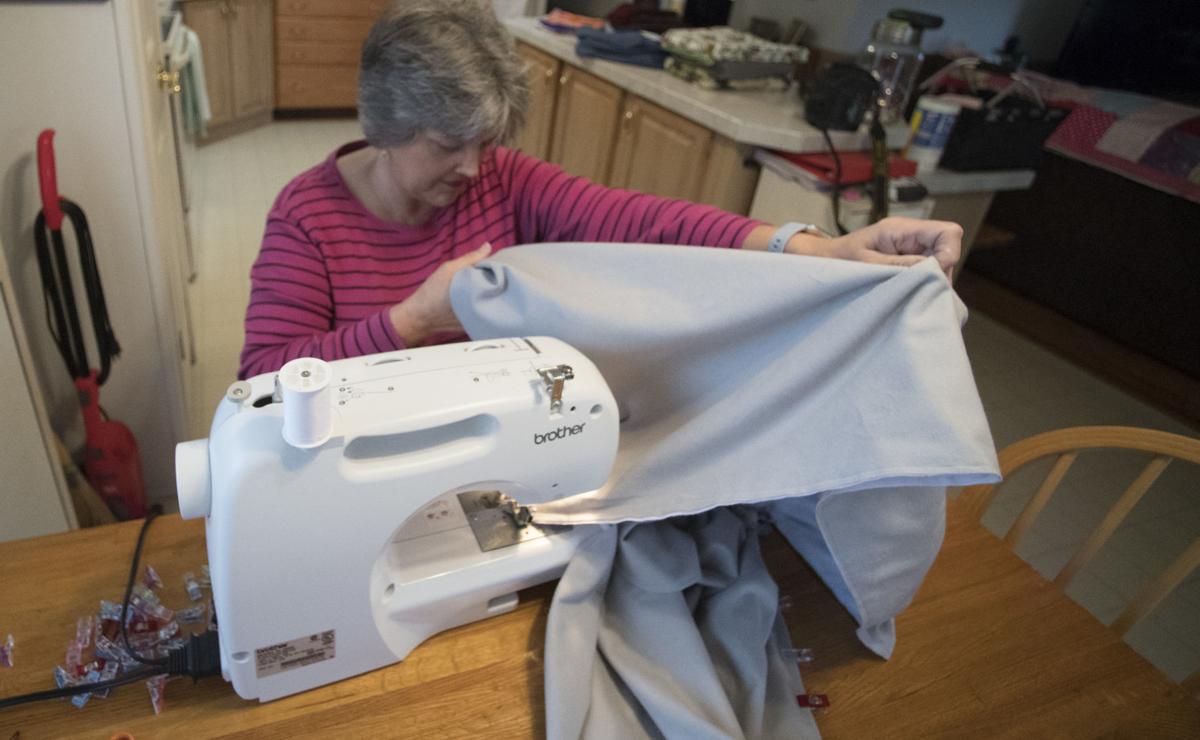 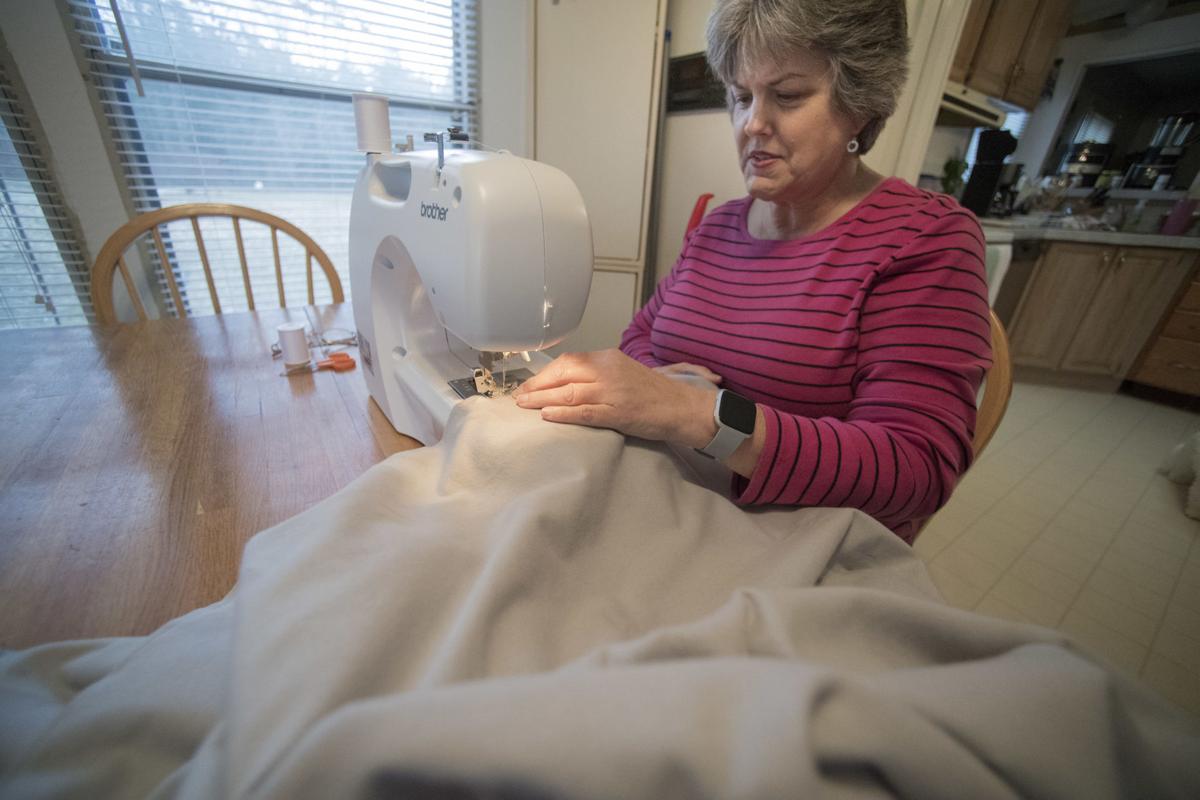 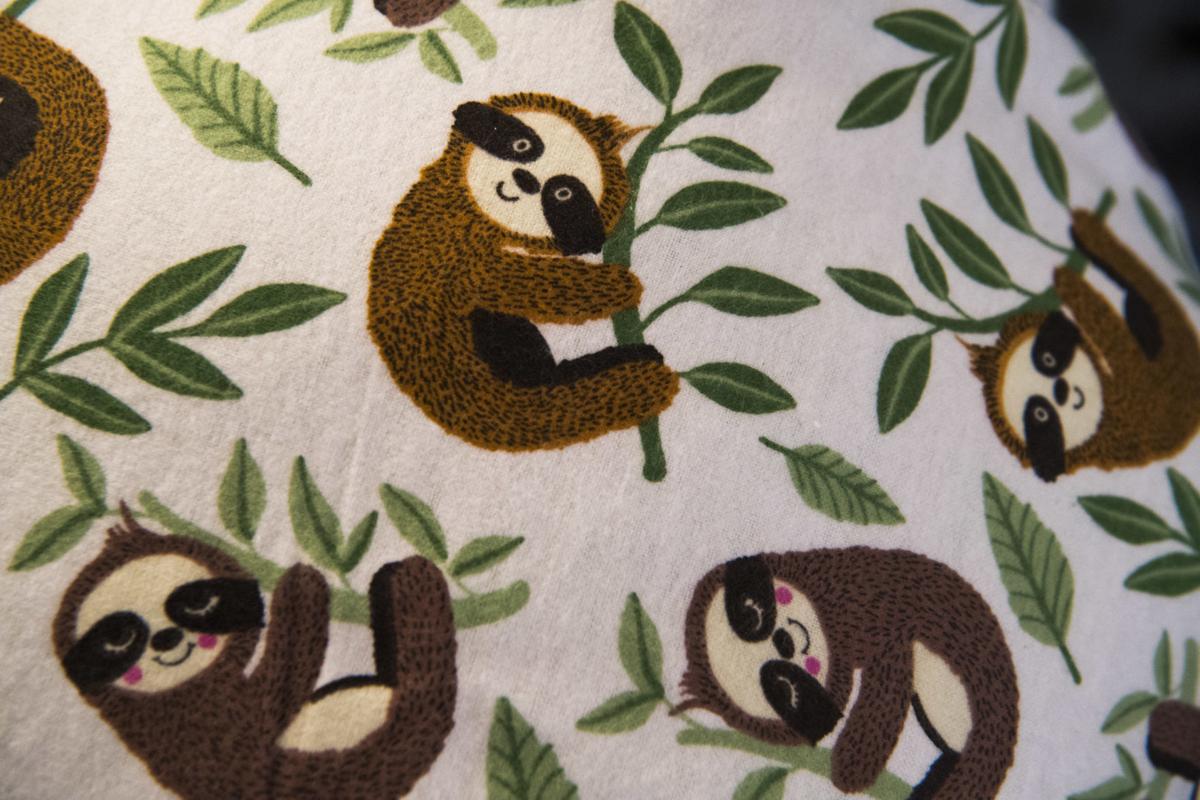 A pattern of Sloths were on a recent blanket made by Sandra Pollard.(Photo by Lee Luther Jr.) 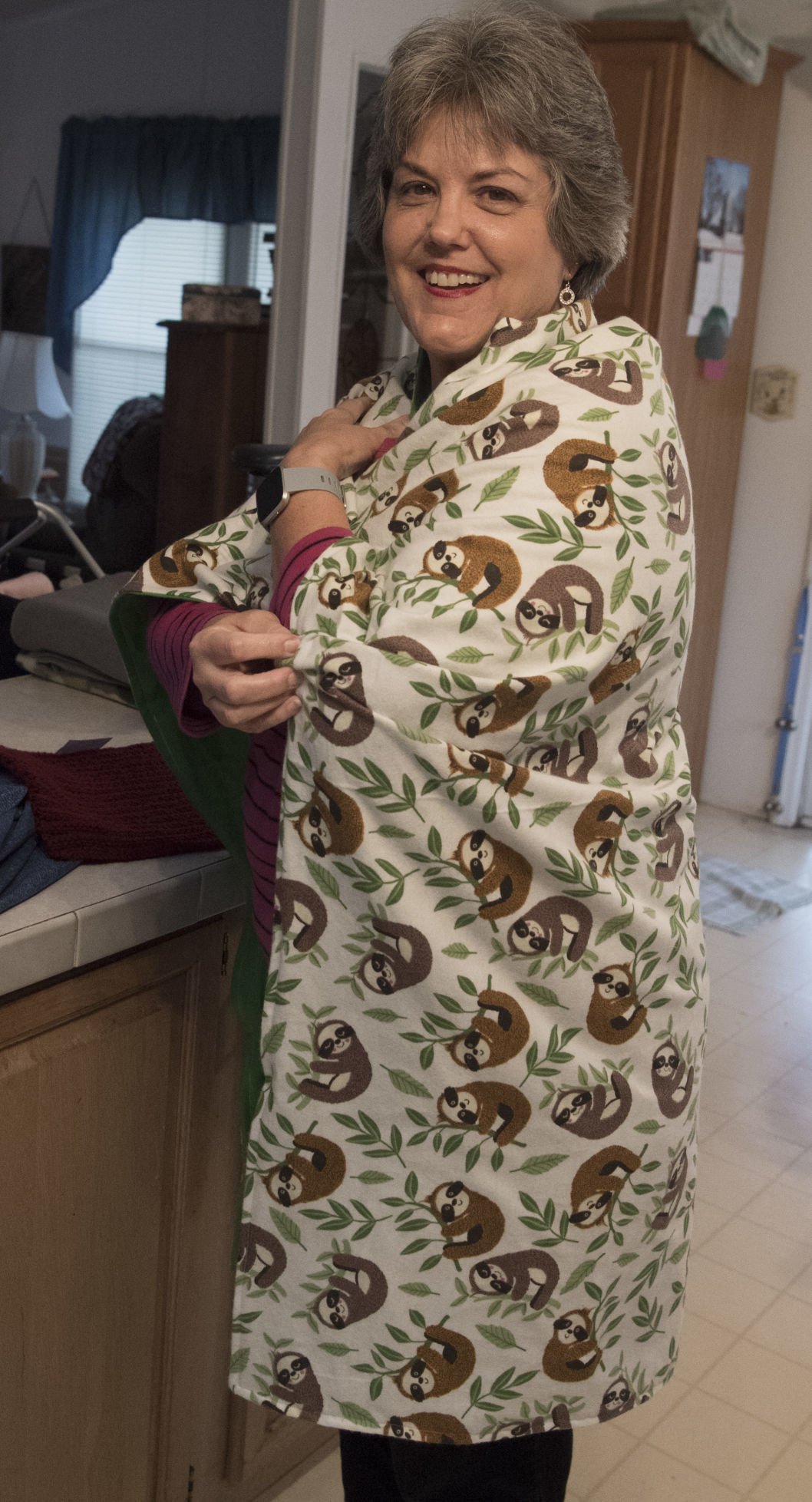 Sandra Pollard models a blanket that will be shipped to Australia.(Photo by Lee Luther Jr.) 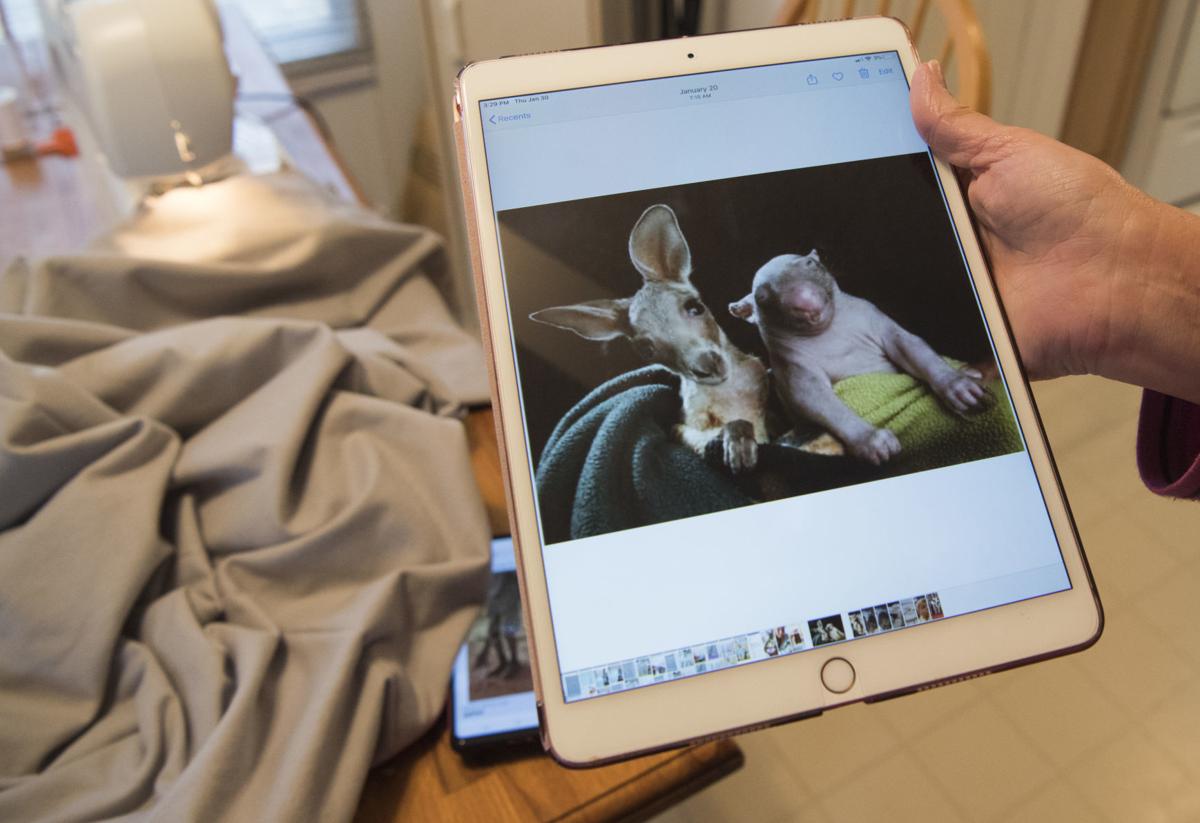 Pollard holds a images of two of the animals and what items are needed.(Photo by Lee Luther Jr.) 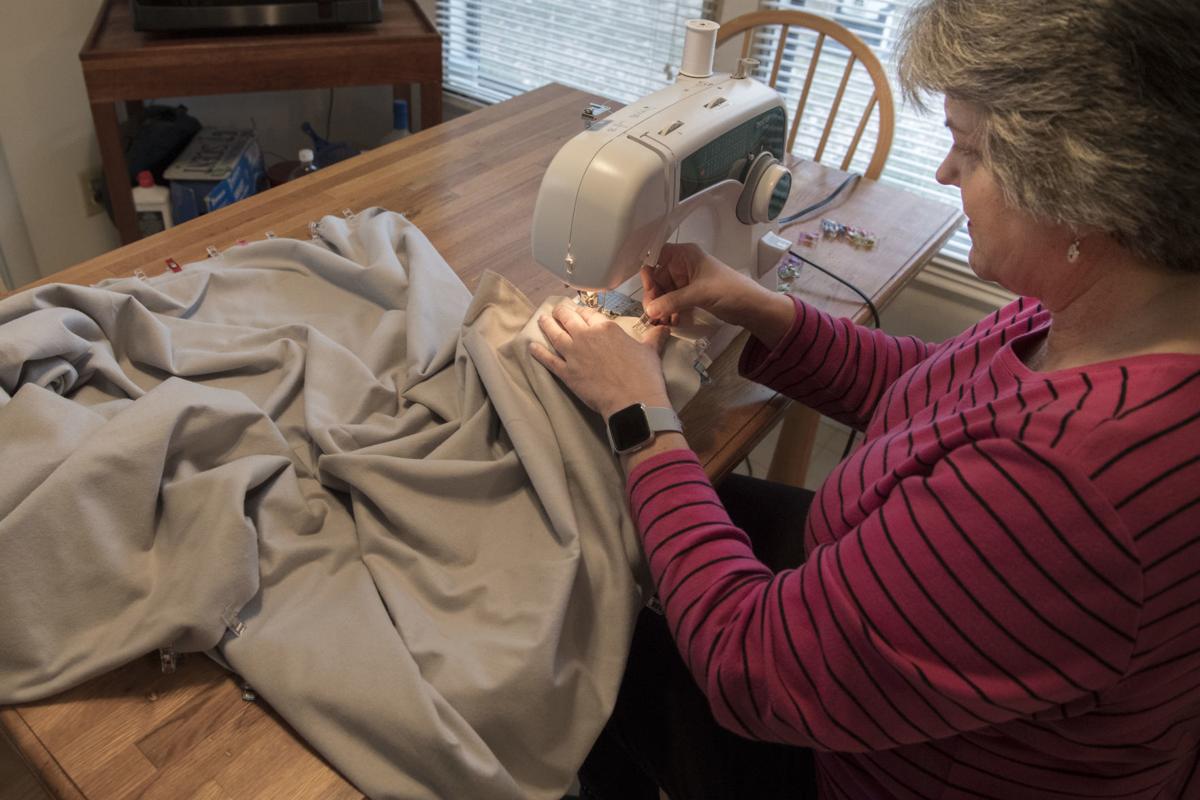 Australia has seen an almost unprecedented wildfire season. By some estimates, the wildfires have claimed millions of acres of land and the lives of more than a billion wild animals, according to the Associated Press. Australia is home to creatures found nowhere else on the planet, and scientists fear many of the continent’s unique species may not recover.

Half a world away in Nelson County, the devastation weighed heavily on Sandra Pollard’s heart.

“As much as I would love to, I knew I couldn’t go to Australia,” she said with a laugh. “I’m an animal lover. The people … there are things to help them, there’s Red Cross and Salvation Army. The animals have nobody, so somebody’s got to help them.”

It didn’t take long before she learned animal rescue organizations were looking for handmade items to care for the animals affected by the blaze.

They needed 3D pouches the baby joeys can climb into and liners for easy cleaning. There was a call for wraps used for bats and other small animals that have a pillow sewn inside with the remaining material used to swaddle them, forming a “bat burrito,” as Pollard called it in a video she took to show off her first shipment. There is a need for crocheted bird nests to replicate the homes the birds lost — becoming little more than tinder and then ash after the fires rolled through. And there’s a need for blankets to wrap around the animals to provide them some semblance of comfort.

“I didn’t know when I started this ... what God had in store for me,” she said. “It was like this is really weighing heavy on my heart and I’ve got to do something, but He said ‘you’re going to do more than what you realize you’re going to do’.”

As her task got underway, the Tye River Elementary School secretary got on social media and asked for help. The response, she said, was “overwhelming.”

Pollard was flooded with messages from people sharing her willingness to help. She said people were offering to help in just about any way they could. Bolstered by the outpouring of support, she launched what she dubbed “Stitching for Aussie Mission.”

Pollard said she started her mission with a single goal in mind: to help just one animal.

Rescue organizations were very clear about what they needed for the animals. They would need items to replace lost homes and comforts. Everything needed to be made of natural materials such as wool, cotton and flannel, something Pollard said was necessary for the protection of the animals.

They’re coming from nature so they have to be in natural [fibers],” she said. With the help of numerous donations, she was able to send her first shipment directly to Australia. But that didn’t come without obstacles.

Initially, she said shipping directly to the continent would cost her $300, which was not financially feasible. She also started seeing posts on social media from rescue organizations calling off their searches for donations.

Undeterred, she called one organization, Rescue Craft Collective, to ask if they still needed donations. She said they told her they still were very much in need of items and gave her an address in Australia she could ship to directly. Pollard was able to find the workaround she needed for her shipping dilemma and send her first package for only $122. The shipment was paid for entirely by monetary donations.

“It was meant to be that we shipped directly to Australia. And the funding was provided that we were able to do that. We didn’t have to worry.” Pollard said.

With her first package sent and nearly at its destination, Pollard said she is collecting just a few more items and has enough money left to send a second shipment which she said, “is a wonderful feeling.” It will consist mostly of blankets and pouches because that currently is what Rescue Craft Collective is most in need of.

According to Rescue Craft Collective’s Facebook page, as of Jan. 15 they are most in need of hanging bags, 3D hanging bags, hammock bags and swaddling blankets.

Rescue Craft Co. did not respond to an email requesting comment for this story, but according to its Facebook page, they are “a community group of creatives doing our bit to help.”

In an interview last week, Pollard said she planned to send the next shipment over the upcoming weekend.

So far, everything she has been able to accomplish has been through the help of just less than 30 people. She’s collected a total of 85 items, including what she shipped in her first package. Through fundraisers and individual donations, Pollard has raised $830 as of last Friday. She said the whole experience has been a “total uplifting blessing.”

Pollard has made a little bit of everything — blankets, wraps and pouches and liners — except for the crocheted bird nests. She said she had enough nests she didn’t need to make any herself.

She said she’s even encouraged her fellow staff at Tye River to make donations if they want, but she hasn’t asked the children to help. According to Pollard, it would take a lot to get them involved and “it takes away from the actual mission and gets complicated.” She’s also had members of her church, as well as other churches and parents, donate.

Arrington resident Vickie Hensley first saw Pollard’s call to action about a month ago. She shared Pollard’s desire to help the animals and she has worked to make several items for donation.

“My heart just goes out to them,” Hensley said. “I have the skills to do it and I just feel … I’ve been given a God-given talent to do something and I just think ‘Why not?’”

Hensley said she’s made 3D kangaroo pouches, flannel blankets and some crochet nests. She added she’s made these mostly through knitting.

Connie Massie, of Lowesville, also wanted to help after she saw Pollard’s request on Facebook, but could not craft the handmade items herself.

Massie first thought she simply could donate some money to the cause, but she then had the idea to go much further by creating a fundraiser that others could donate to in order to help cover the expensive shipping costs.

“I am disabled so I’m not a sewer, I’m not a crocheter, I’m not a knitter,” she said. “At first I thought I would give her some money for shipping ... but then I thought that was a good way for me to get involved.”

Massie created a fundraiser on Facebook called “Connie’s Pets/Animals Fundraiser — Australia.” When she began the fundraiser Jan. 16, she set her initial goal at $600. So far she has raised $560 and she said she “sure would like to meet that goal.”

She said she is happy people who cannot craft like her still are able to contribute to Pollard’s mission.

“That’s a really good feeling that people who want to help but didn’t know how to help, this gave them an outlet to contribute some money,” Massie said.

Pollard said while none of the money Massie raised was used for the first shipment, it is going to be used for future shipments, including the one she planned to send over the weekend. And Pollard plans to make a direct donation with any additional money not used to send packages.

She said she will continue her Stitching for Aussie Mission until they tell her to stop.

“Things happen for a reason and we don’t know the reason, but we know that this brought a lot of people together. It’s a mission I’ll never forget as a lot of people won’t either I’m sure,” Pollard said.

Pollard holds a 3D Joey Pouch that a baby Kangaroo will get in for comfort.(Photo by Lee Luther Jr.)

A pattern of Sloths were on a recent blanket made by Sandra Pollard.(Photo by Lee Luther Jr.)

Sandra Pollard models a blanket that will be shipped to Australia.(Photo by Lee Luther Jr.)

Pollard holds a images of two of the animals and what items are needed.(Photo by Lee Luther Jr.)