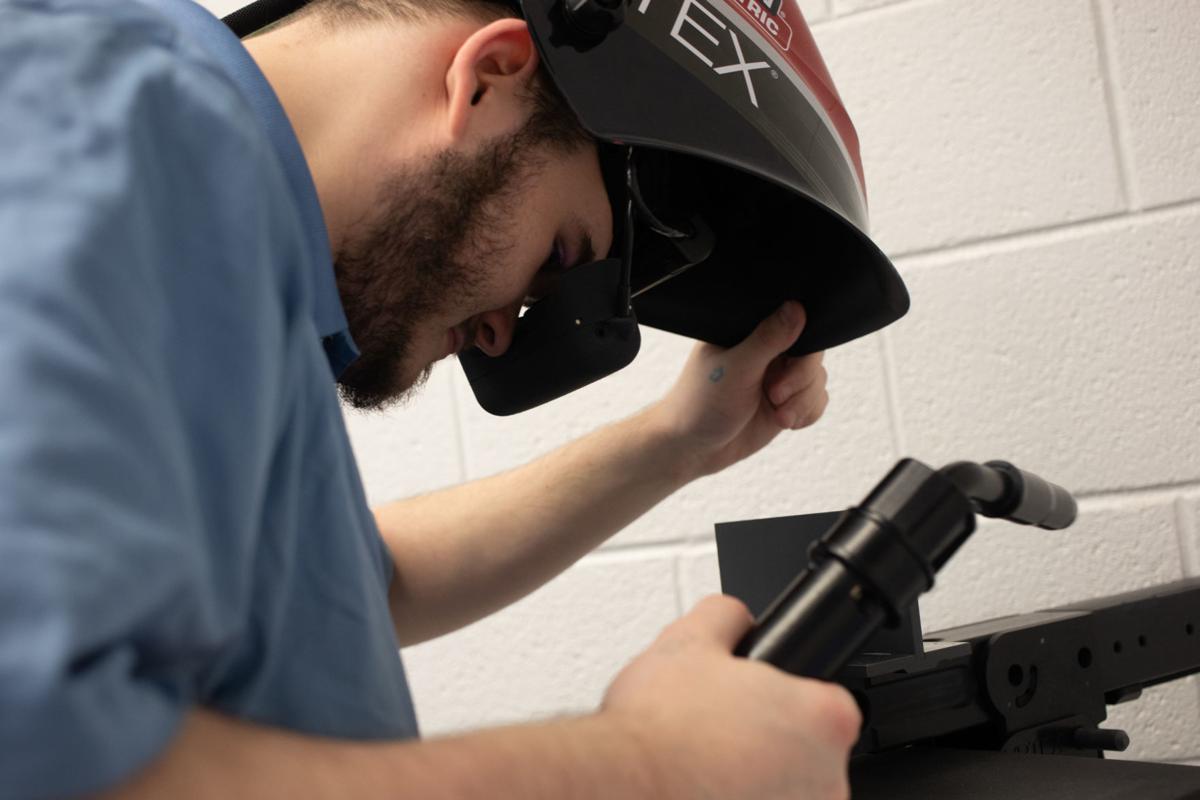 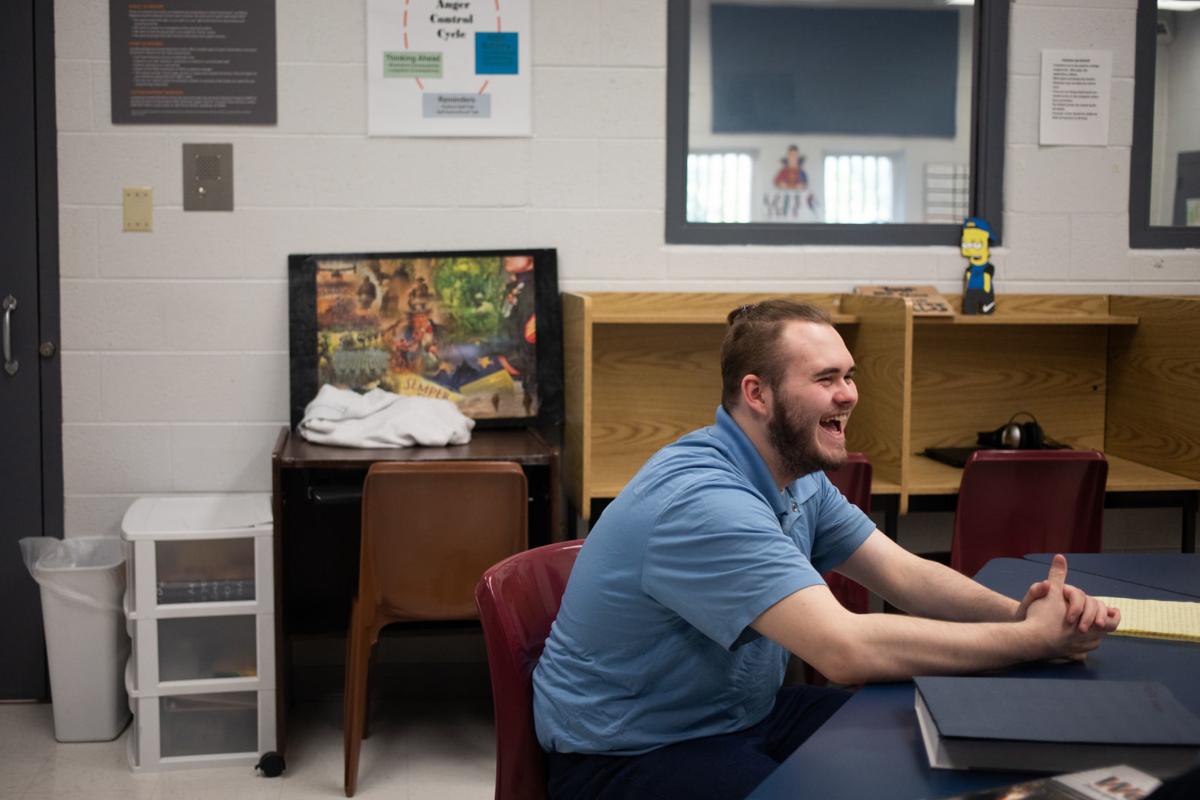 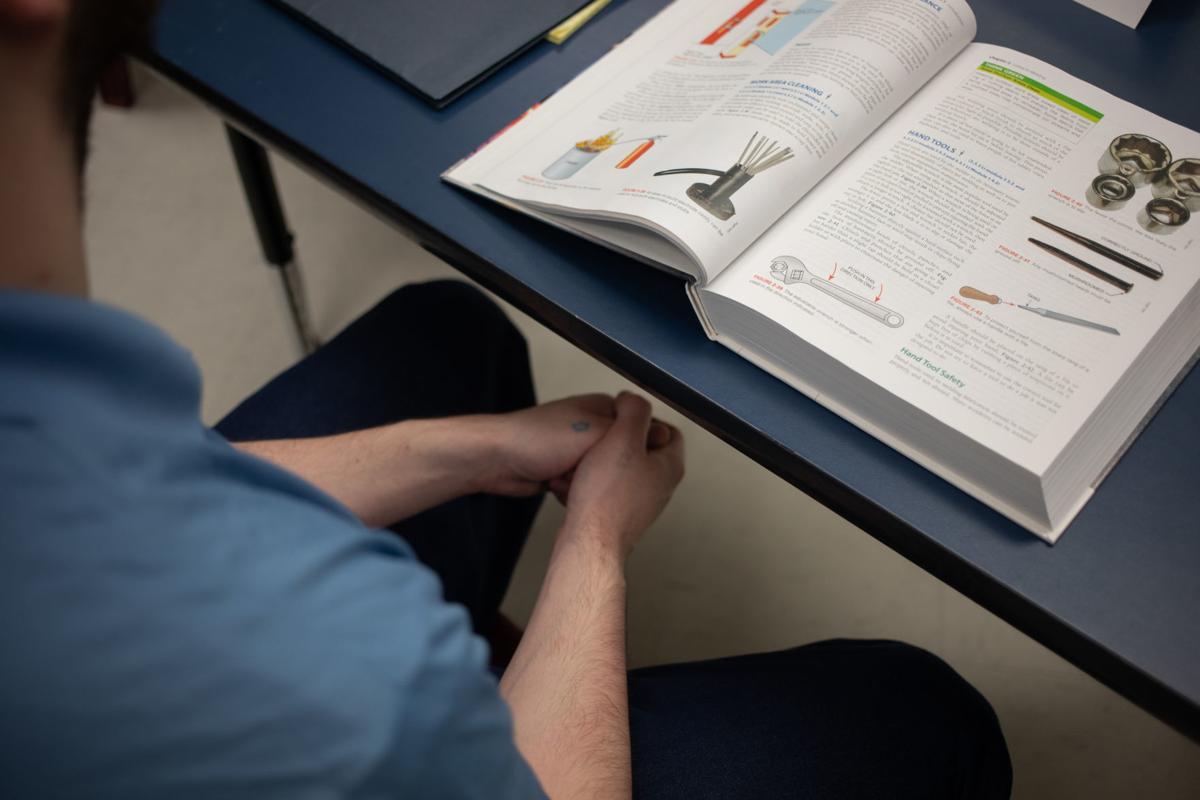 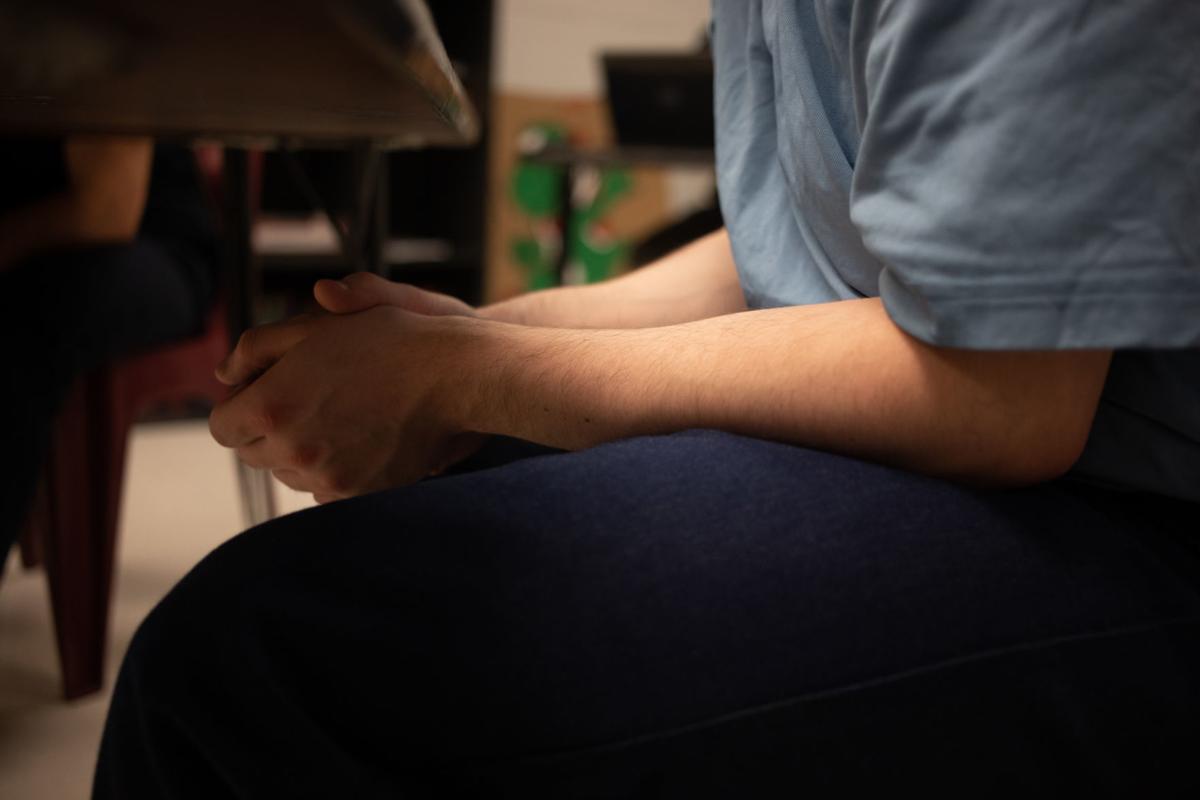 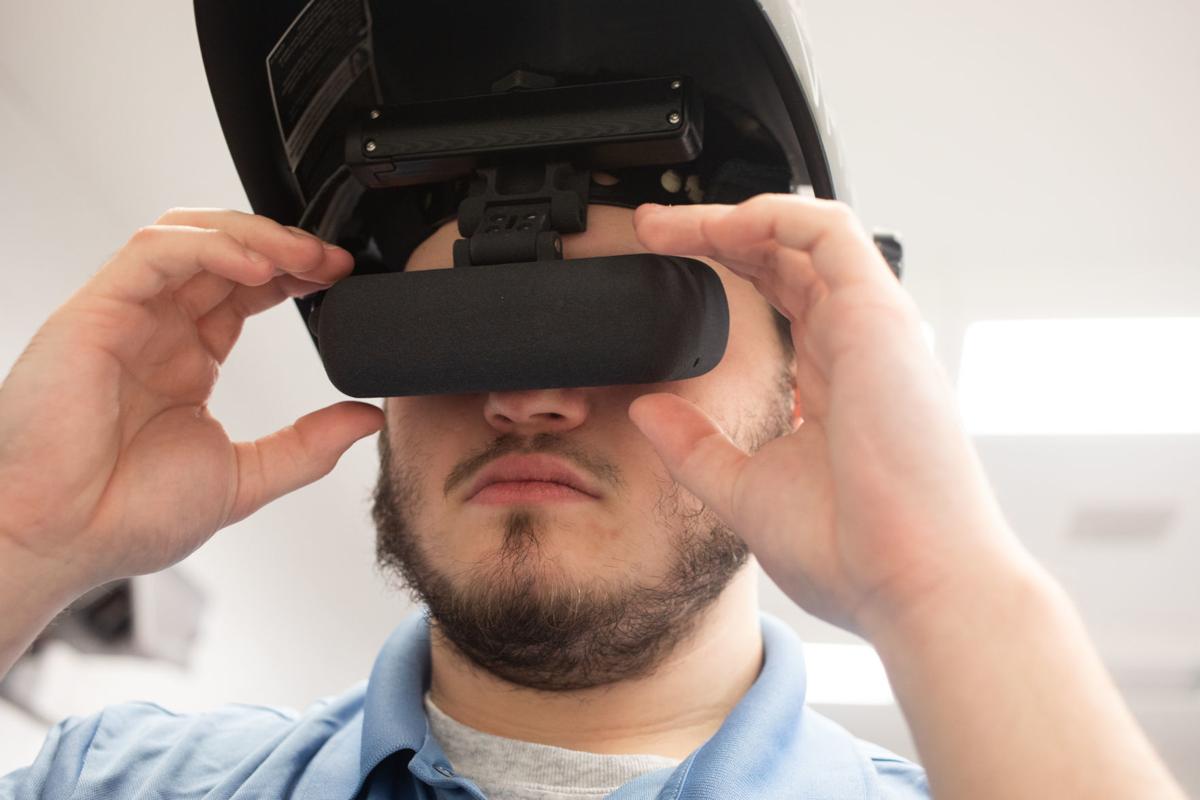 Sanders puts on VR goggles to practice welding techniques. Sanders, as part of Lynchburg’s Community Placement Program, has earned his GED, started online classes at the University of Phoenix and begun the newly offered vocational training. 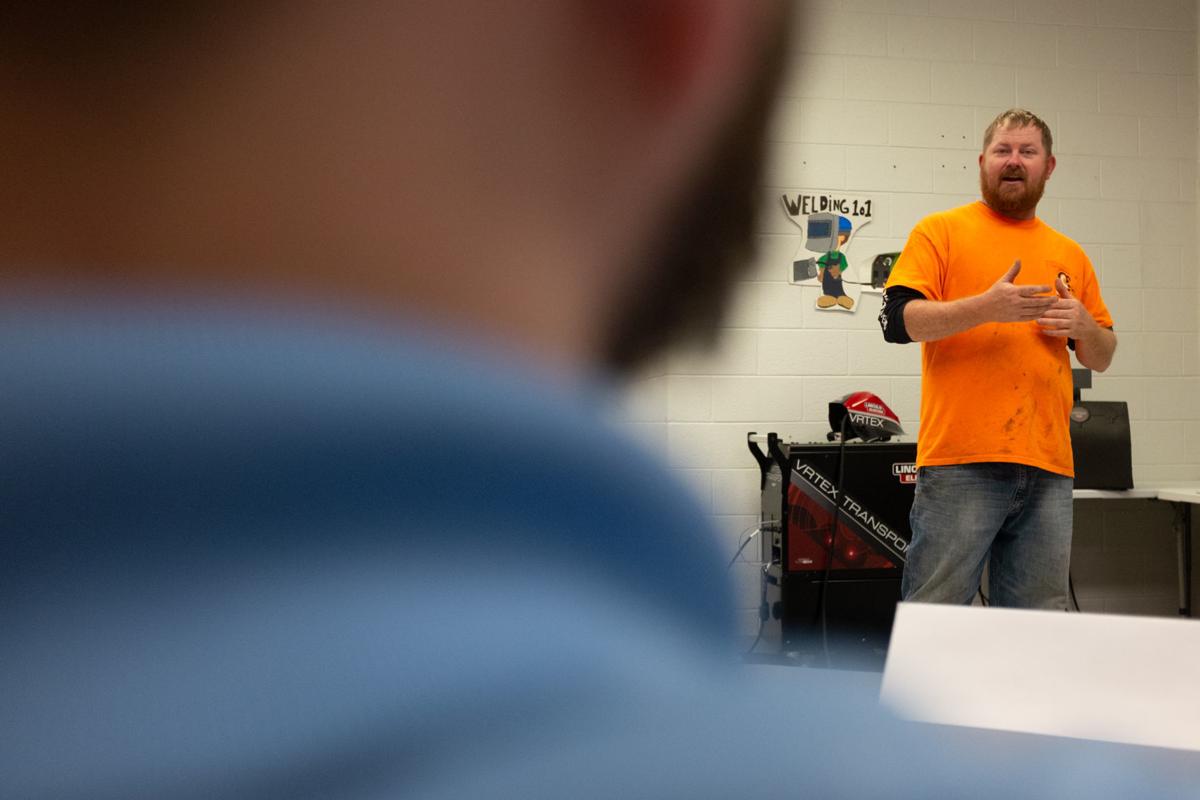 Cody Hurd, a founder of C&C Piping and Fabrication in Altavista, teaches detainees about the basics of welding on Saturday, Oct. 19, 2019 at Lynchburg Regional Juvenile Detention Center. 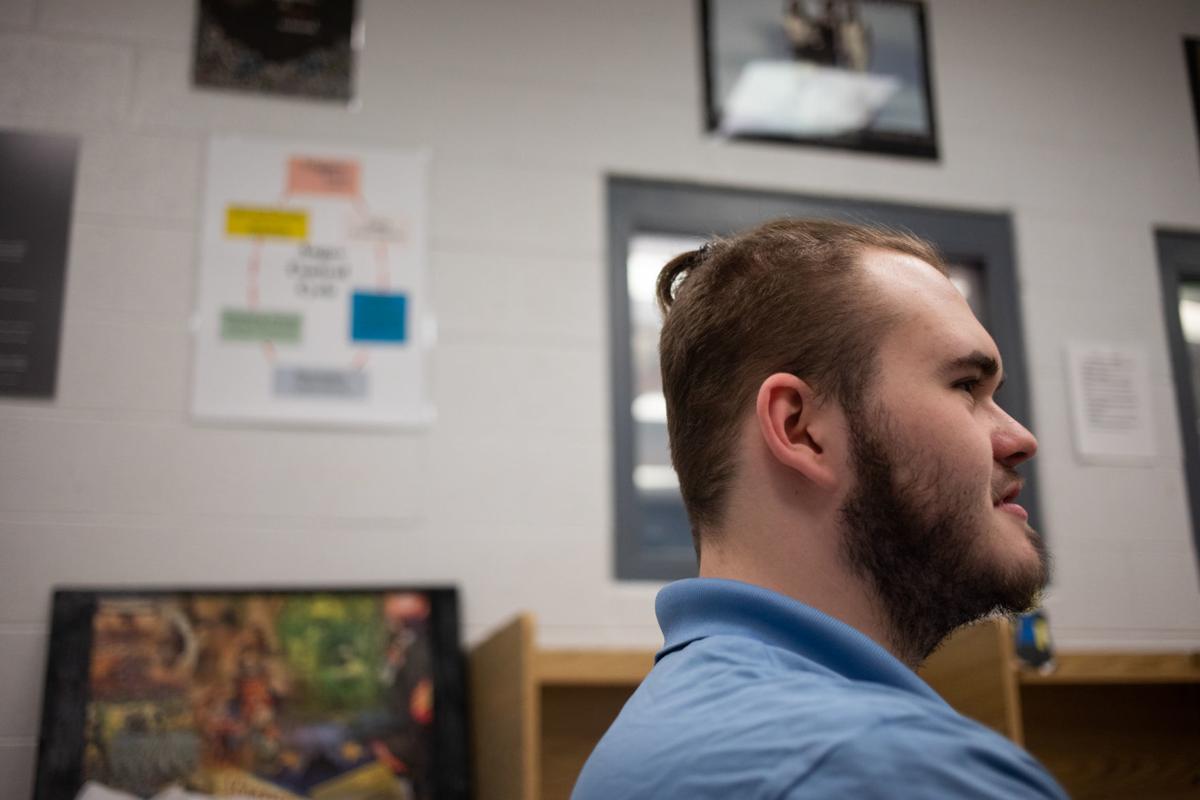 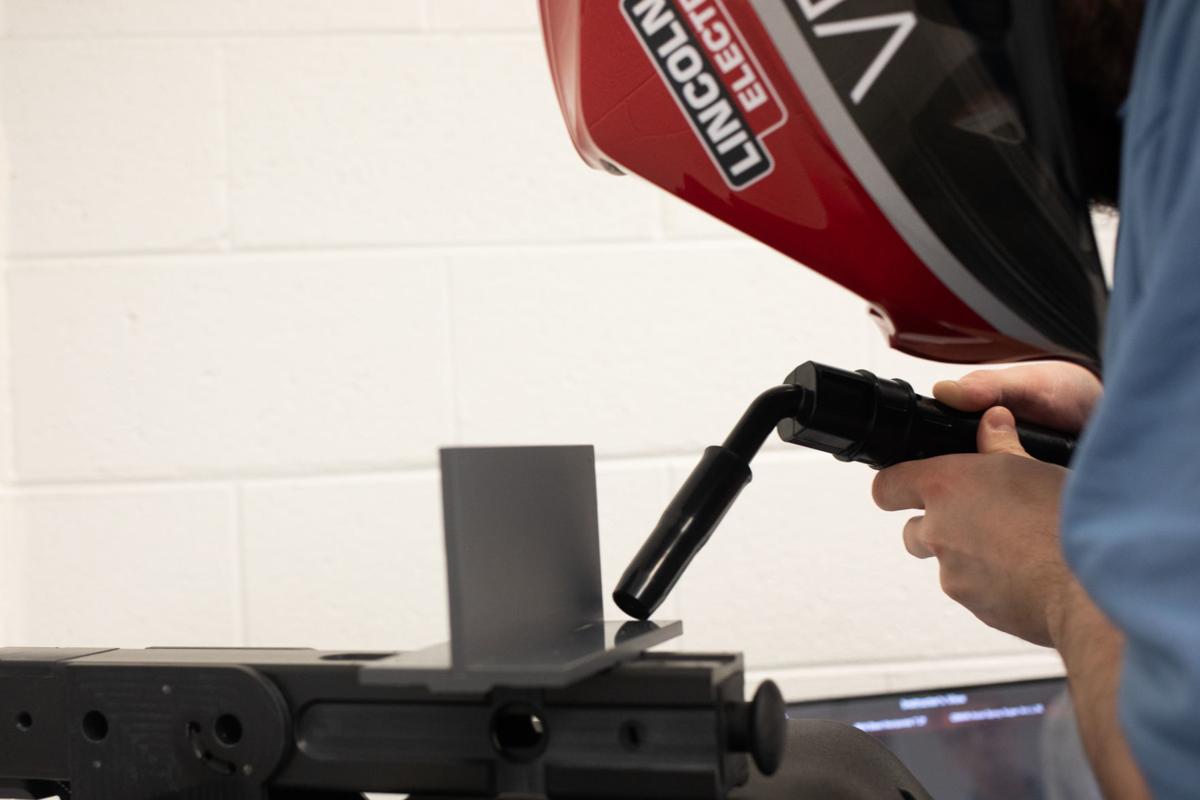 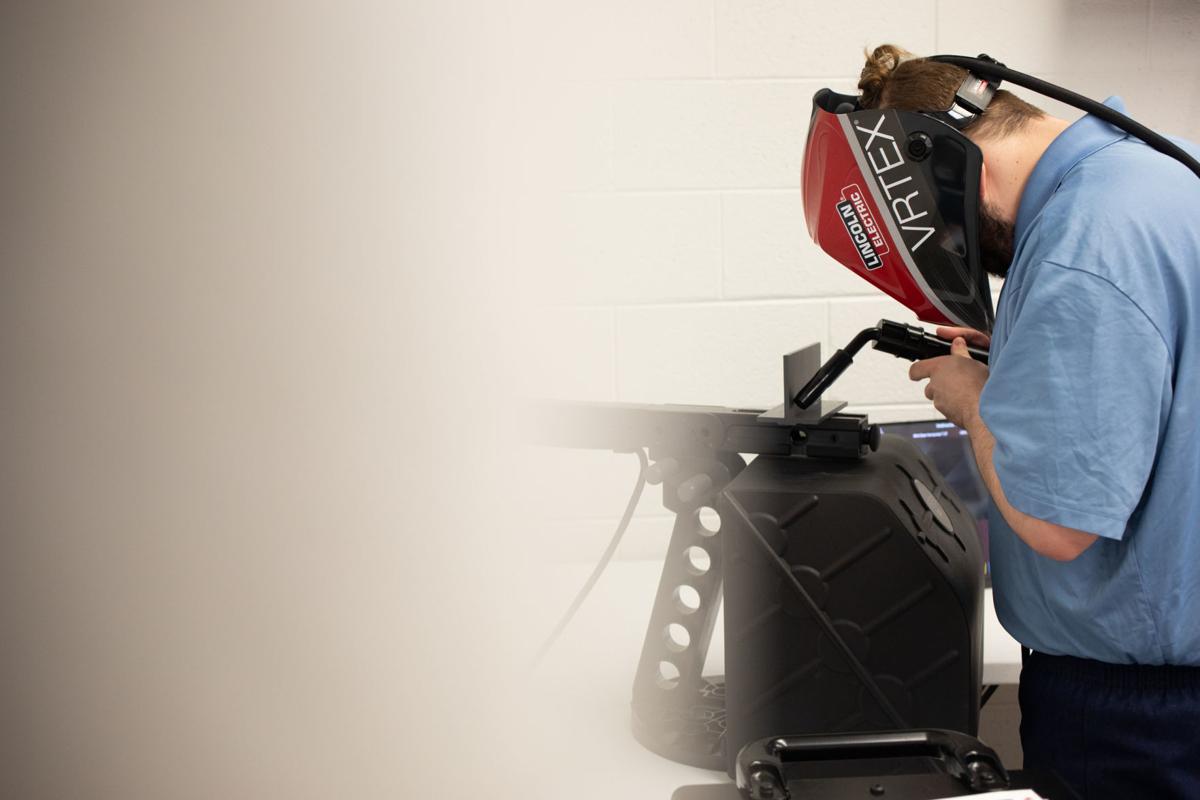 Jasper Sanders was standing in a four-walled white cinder block room in the Lynchburg Regional Juvenile Detention Center, but when he slipped a pair of virtual reality goggles over his eyes, the space transformed into a fully operational welding workshop.

In one hand, Sanders held the simulator’s welding tool, with the other he lowered a welding helmet over the goggles. He approached the virtual reality test plate while a computer monitor showed what Sanders saw in real time — virtual sparks flew as he started to weld.

For the first time, Central Virginia Community College is partnering with the Lynchburg Juvenile Detention Center to provide vocational training through the detention center’s Community Placement Program. It targets detainees ages 14 to 20, and is a partnership between the Department of Juvenile Justice and local detention facilities to provide residential services with a focus on community reintegration.

According to Greg Davy, spokesman for the Virginia Department of Juvenile Justice, the program is an attempt to keep youth in their home communities, rather than large state facilities. The program began three years ago, and there are now 10 such programs in juvenile detention centers across the state.

It is funded entirely through the Virginia Department of Juvenile Justice. In September, Lynchburg City Council unanimously approved appropriating $17,995 in additional funding to be reimbursed by the state for a welding simulator for the Lynchburg program, along with $5,000 for additional supplies.

Tamara Rosser, director of human services for the city of Lynchburg, said the state pays a flat rate for each program, about $817,600 annually, and provides money for additional needs — like the welding program — as well.

“The goal is to wrap services around them to ensure that they have what they need,” Rosser said. “We really want them to have some marketable skill ... the whole goal is to reduce recidivism and put them on a successful path.”

Sanders, 19, has been a part of Lynchburg’s Community Placement Program for about a year and a half. Since he began, he has earned his GED, started online classes at the University of Phoenix with the goal of getting his bachelor’s degree in business and has begun the newly offered vocational training.

“It gives kids a chance to show that they can really be more than what they are,” Sanders said in an interview with The News & Advance. “It gives them a chance to improve on their education, whereas if they’re just thrown in somewhere where they don’t have much options.”

Unlike other facilities he has been to, Sanders said the Lynchburg program was showing him that he could grow and learn. Rather than providing the bare minimum, it has allowed him to go to college, participate in a trade program and “be more.”

“The program gives you things that when you’re released can help you get on your feet or possibly stand alone,” Sanders said. “I can show that I’m more than what the state was trying to label me as.”

In 2017, Sanders pleaded guilty to charges connected with a robbery he committed when he was 16, according to online court records.

Sanders said he has wanted to weld ever since he was little; once he is released, he hopes to pursue the career and one day own a business in welding and fabrication.

“We’re in a structured environment every day, so the school aspect is memorable,” Sanders said. “But CPP is more than just the education, it’s having people around you that have the same goal, and want to get out and want to do good ... you have to actually grow as a person if you want to succeed in it.”

Welding classes officially started on Oct. 7, a “pilot class” in the first of many collaborations between the detention center and CVCC, according to Francie Dye, workforce training coordinator at the college.

They chose welding as the first pilot project, said Dye, because it seemed to appeal the most to the students and because there is a high demand for welders in the workforce.

Dye said they sought to create a comprehensive program. Not only will students gain a hands-on welding experience, but they will meet three days a week, with learning modules designed to give them study strategies and promote career readiness.

Students have been engaged, interactive and hungry to learn more, Dye said. With four students currently in the class, instructors are able to provide one-on-one attention.

The class is designed to be about nine and a half weeks, or 54 hours. Once students have completed the class, they will have the equivalent of three college credits and the basic skills they need to continue their education.

“We have an inclusive, comprehensive program,” Dye said. “And wherever they go, they have their foot in the door with a community college or other partners.”

Most important, said Dye, is to provide students the opportunity to believe in themselves.

“We need to be committed to second chances and third chances and fourth,” Dye said. “Once you come in here, you have a clean slate as far as I’m concerned. You write your own story.”

Among the instructors is Cody Hurd, a welding instructor at CVCC who is the project manager at Altavista-based C&C Piping and Fabrication, an industrial maintenance and repair company.

There is a high demand for welders in the Lynchburg area, and he said trained welders are hard to find. With the basic skills he teaches in the detention center, Hurd said students can find entry-level positions once they are released and have the foundation they need to build a lucrative career.

“Most kids just need something to do, someone to show them what to look for,” Hurd said. “For most of them, it’s situational. They didn’t go in there because they are bad people, they have just made some bad decisions.”

In the course, the students at the detention center will learn on more than the virtual welder, Hurd said. There are trips to the welding lab at CVCC built into the curriculum, meant to move their training forward.

“Until you actually feel the spark and the burns, you aren’t a welder,” Hurd said. “When you weld, it doesn’t matter where you come from.”

The virtual reality welding simulator sits in the corner of the CPP classroom. The Lincoln Electric VRTEX is a sleek, portable machine — glossy red and black. The computer-based training system is an educational tool designed to allow hands-on skill-building and welding performance. From a realistic welding puddle to accurate sounds and movements, the simulator guides students through self-taught lessons and grades and critiques their work.

Michael Schaeffer, the CPP casework coordinator, leads the program at the Lynchburg center, and works with the detainees on a day-to-day basis. Built to hold eight detainees, there are currently six students in the unit, though not all are in the course, a number which fluctuates often depending on the length the student’s stay. The entire juvenile detention center currently houses 31 detainees.

Schaeffer called the welding classes a starter program, with hopes to get even more vocational training into the detention center through their newfound partnership with CVCC. For a lot of the detainees, vocational training is integral to their success and stability once they are released.

“We’re so happy to get it off the ground,” Schaeffer said. “It will open up other doors, and we want to see where to take it. For Lynchburg, it’s a first.”

With a driving simulator on the way, and plans to expand the program into other trades on the horizon — such as HVAC, hospitality and barbering — Schaeffer said this is just the beginning.

James Lemons, associate vice president of Workforce, Business and Allied Health at CVCC, said if they don’t do something to help turn the detainees’ lives around, “they’re going to be right back there in the same place.”

“We are hoping that eventually these students, when they are released, will continue education at CVCC and go through a full welding program with us,” Lemons said. The program at the detention center will get the prerequisite class out of the way, and give them a path forward.

“We try to say that we are the community’s college,” Lemons said. “We want to serve everybody, and these are people that deserve our help.”

A man convicted of several burglaries from parked cars and leading police on an ensuing chase that put several schools on lockdown will serve just under five years in prison.

AMHERST — A year after a Madison Heights man was arrested and accused of shooting his elderly father to death, questions remain on his compete…

The closure of the Franklin County treasurer's office this week resulted from two staff members testing positive for COVID-19.

Sanders puts on VR goggles to practice welding techniques. Sanders, as part of Lynchburg’s Community Placement Program, has earned his GED, started online classes at the University of Phoenix and begun the newly offered vocational training.

Cody Hurd, a founder of C&C Piping and Fabrication in Altavista, teaches detainees about the basics of welding on Saturday, Oct. 19, 2019 at Lynchburg Regional Juvenile Detention Center.