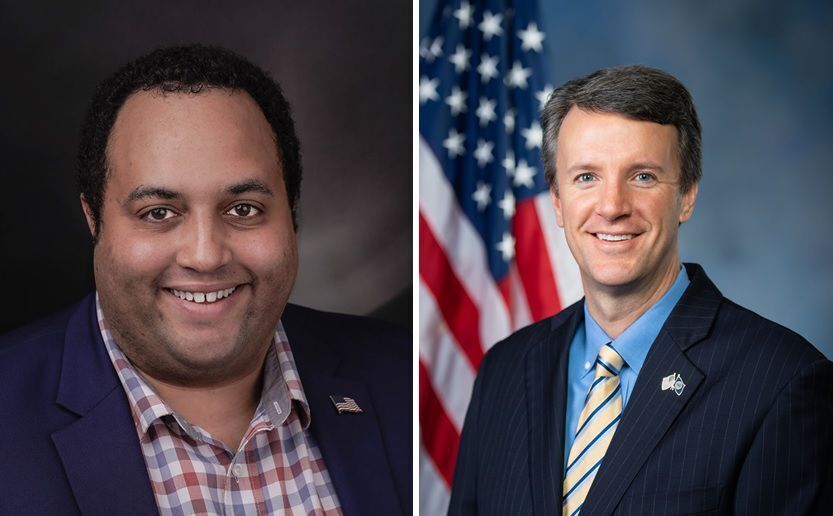 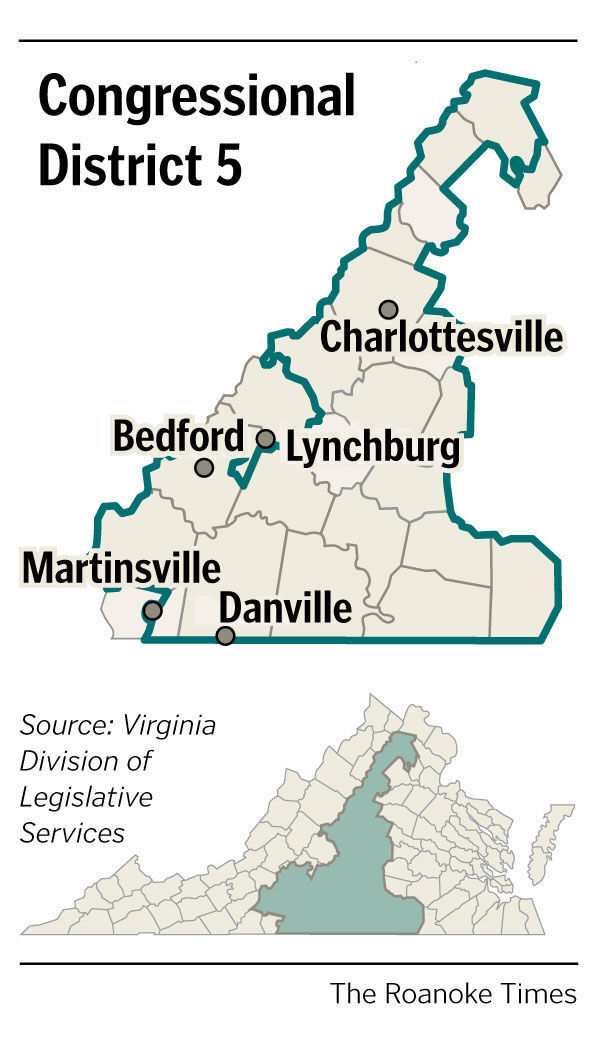 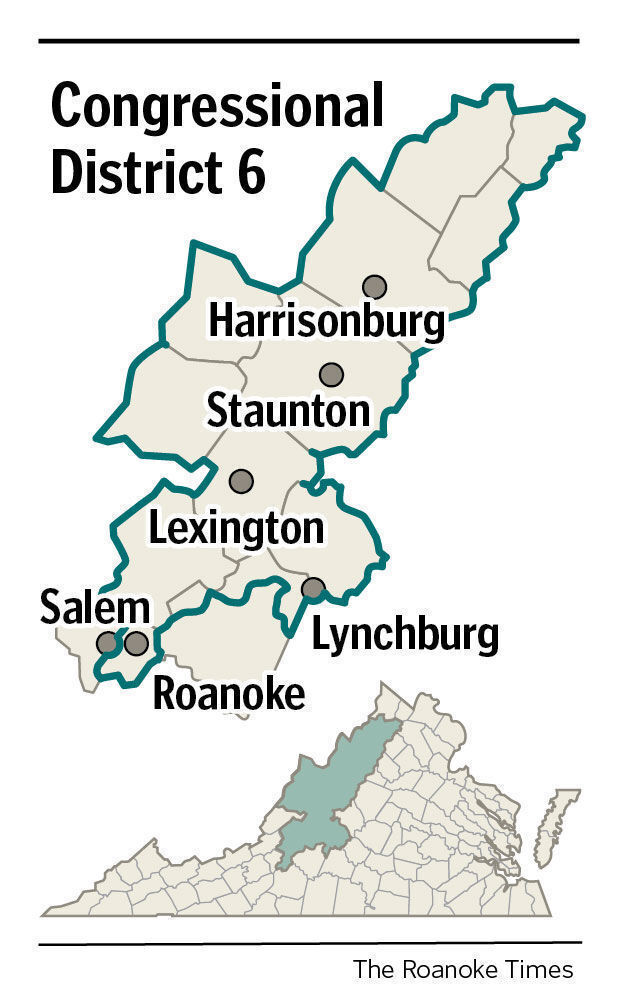 A map of the 6th Congressional District

A competitive race for an open seat in central Virginia and an uphill battle against an incumbent in Western Virginia make up some of the congressional races in Virginia this fall.

A race that is attracting attention is between Republican Bob Good and Democrat Cameron Webb, who are seeking to succeed Rep. Denver Riggleman, R-Nelson, after Good defeated him in a convention earlier this year.

Rep. Ben Cline, R-Botetourt, is competing for a second term against Democrat Nicholas Betts, a Roanoke law clerk who previously ran for the House of Delegates.

Rep. Morgan Griffith, R-Salem, is on his way to his sixth term representing the 9th Congressional District, which includes the New River Valley, Southwest Virginia’s coal country, and parts of the Alleghany Highlands and Southside. The 9th District is the only congressional seat in Virginia not being contested.

The election is Nov. 3. For information on how to vote, visit the Virginia Department of Elections at www.elections.virginia.gov.

The congressional race in central Virginia between Good and Webb is expected to attract political excitement as Republicans fight to keep the seat red.

Webb’s trouncing of three Democrats in a primary bolstered enthusiasm among Democrats in the district. But it’ll still be tough for Webb, an internal medicine doctor and director of health policy and equity at the University of Virginia.

The 5th Congressional District is Virginia’s largest, stretching from Fauquier County to the North Carolina border and including Franklin County and part of Bedford County. The last time a Democrat won the seat was in 2008, when Tom Perriello upset incumbent Republican Virgil Goode.

Webb is running on a platform of a public health insurance option, addressing racial and economic inequities, criminal justice reform, and expanding educational opportunities, including tuition-free community and public college for low-income people.

“What makes me a good doctor is that I get paged that a patient is sick, and I don’t panic or assign blame,” Webb said. “I look at the problem, look at the data and find a solution. That’s going to suit me well for this moment we’re in with a series of crises and dealing with issues like health care, justice and equity.”

Good, who identifies as a “bright red Biblical and constitutional conservative,” talked a lot about going to Washington to “defend Judeo-Christian values.” He emphasized his opposition to abortion in all circumstances and support of traditional marriage, contrasting himself with Riggleman, who supported abortion exceptions and officiated a same-sex marriage.

Recently, Good attended an event for pastors, with an invitation for it saying “religious liberties are under assault.” Good’s attendance attracted national media attention. Republican voters who have been uneasy about Good’s emphasis on social issues worry he’ll lose moderate Republican voters and allow Webb to attract independent voters.

But during an interview last week, when asked if he’ll spend time talking about social issues on the campaign trail, he responded by saying he’s focusing on the economy and backing the police. He said he stands behind President Donald Trump and his policies. He supports expanding school choice.

“There are many things on the ballot that make it a clear choice between what the Democratic Party is offering America and what I’m offering,” Good said. “I think most Americans are going to choose Trump’s vision for America.”

Webb said there are some people who have Trump and Webb signs planted in their yards. He tells people how he worked in the White House during the Obama and Trump administrations.

“People are sick of the bitter partisanship, and they want someone who puts people over politics,” Webb said. “I’m willing to go everywhere in this district and hear all perspectives, give them a fair shake, and let them know what I think and feel, too.”

Good has spent the past few weeks holding private fundraisers with Griffith, Rep. Louie Gohmert, a tea party Texan, and Dave Brat, one of the most conservative House Republicans before Rep. Abigail Spanberger, D-Henrico, defeated him in 2018. Good has also set up several rallies in support of law enforcement .

“Just look at what’s happening in cities, and the Democratic Party has refused to address the violence, the rioting, the destruction of property, the attacks on our police officers in our cities,” Good said.

Good and Webb will participate in the Senior Statesmen of Virginia forum on Wednesday.

Cline promised voters two year ago to hit the ground running when he went to Congress, and he says he fulfilled that.

“I’m going to be campaigning on providing effective representation in Washington from the legislative accomplishments to constituent case work assistance,” Cline, 48, said.

He was the first freshman lawmaker to get a bill signed into law and has found ways to work across the aisle to pass legislation in the Democrat-controlled House to help veterans and small businesses. Another reason Republican voters in the district are happy with Cline is that he defended Trump through the impeachment process.

Betts doesn’t think Cline represents enough of the interests of the people in the 6th District. The main reason Betts says that he’s running is that no one else will.

“It’s important that people have a choice on the ballot,” Betts, 30, said.

It’s hard for a Democrat to compete in the 6th Congressional District, which extends from Roanoke eastward to Lynchburg and north to Front Royal. The seat has been a Republican stronghold for years, and Cline defeated his Democratic opponent two years ago with 60% of the vote.

Betts is a Lexington resident and works as a clerk at a Roanoke law firm. This is Betts’ second time running for public office. He unsuccessfully sought the Democratic nomination two years ago for a Rockbridge-area House of Delegates seat.

His main priority is expanding access to health care, and he supports a public option.

“I think if you want to keep your private insurance, you should be able to,” Betts said.

Anticipating that the pandemic will last into next year, he wants to focus on children getting a quality education and expanding broadband. He also wants to work on the student debt problem, and supports keeping the interest rate at 0% for federal student loans. That’s what it’s temporarily set at because of the pandemic.

Betts criticized Cline for votes on a few pieces of legislation that had bipartisan support but Cline voted against.

Cline voted against the Families First Act, a coronavirus relief package, and the Great American Outdoors Act, which will make repairs to public lands across the country, including portions of Shenandoah National Park and the Blue Ridge Parkway in Cline’s district.

Cline said he didn’t vote for the Families First Act because he didn’t have sufficient time to read the bill prior to the vote.

When asked recently if he would have voted differently now that he’s read the entire bill, he said he didn’t want to “deal with a hypothetical.” He said he supported some of it and opposed other parts.

He said he voted against the Great American Outdoors Act in part because it called for acquiring additional land before meeting current needs.

“I believe the funding should go to existing parks before any new acreage is acquired out West, putting greater strain on the system to meet the overall needs,” Cline said.

If reelected, Cline wants to work on helping businesses survive the pandemic and advocate for targeted aid at the local level. He also wants to keep advocating for infrastructure improvements, including to Interstate 81.

Cline backs Trump’s reelection, saying the president has cut taxes and reduced regulations, and that his achievements both domestic and economically and overseas are “worthy of reelection.” He brushed off various political and character criticisms of Trump.

“I’m focused on the policies that would benefit the people of the Roanoke Valley,” Cline said.

Political experience: Campbell County Board of Supervisors from 2016-2019

Occupation: Internal medicine doctor and director of health policy and equity at University of Virginia

Political experience: Elected to Congress in 2018, served in Virginia’s House of Delegates from 2002-2018

Education: B.A. from Bates College and J.D. from University of Richmond School of Law

Education: B.A. and M.A. from Virginia Commonwealth University and J.D. from Washington and Lee University School of Law

In a call with Republican congressional candidate Bob Good and his supporters Sunday night, President Donald Trump blasted opponent Cameron Webb as a “radical Democrat puppet” and sought to gin up excitement for Good’s campaign.

A map of the 6th Congressional District 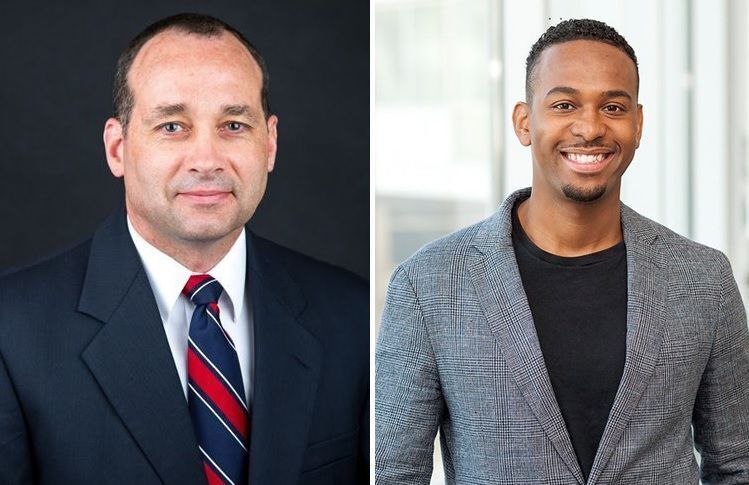