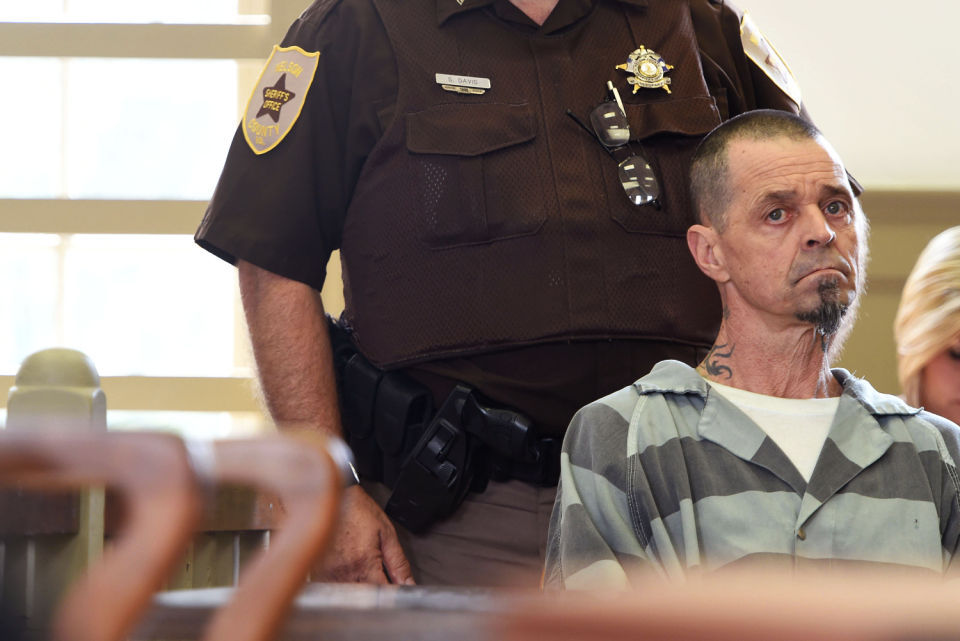 Randy Taylor was ordered to serve two life sentences for the abduction and murder of 17-year-old Alexis Murphy in 2014. 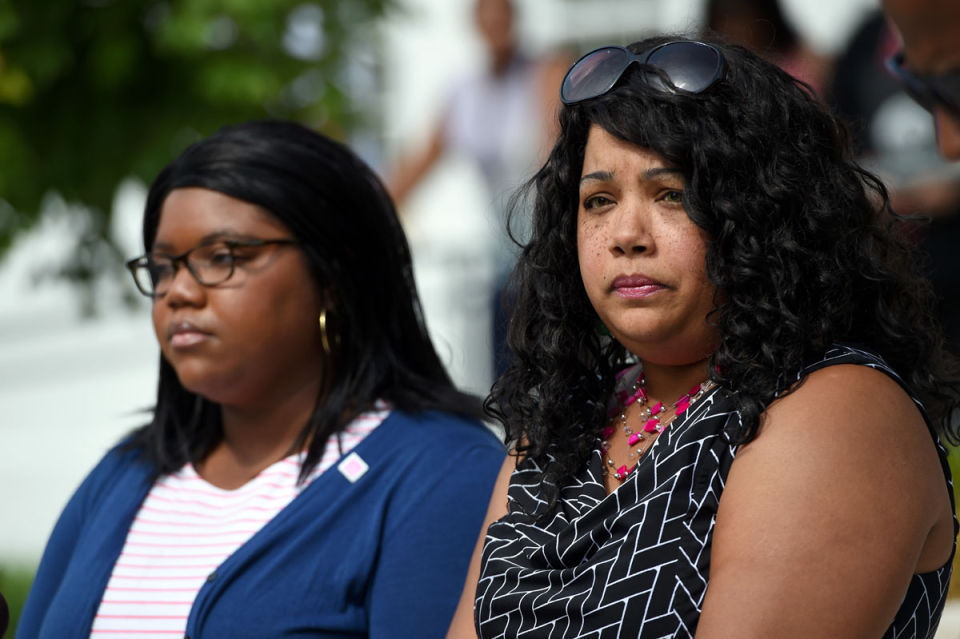 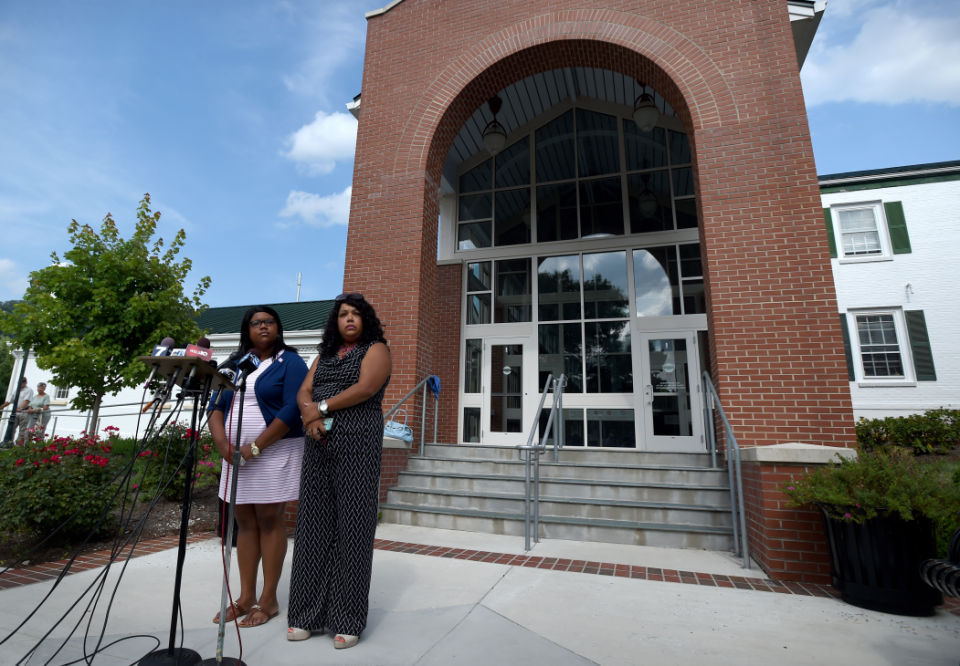 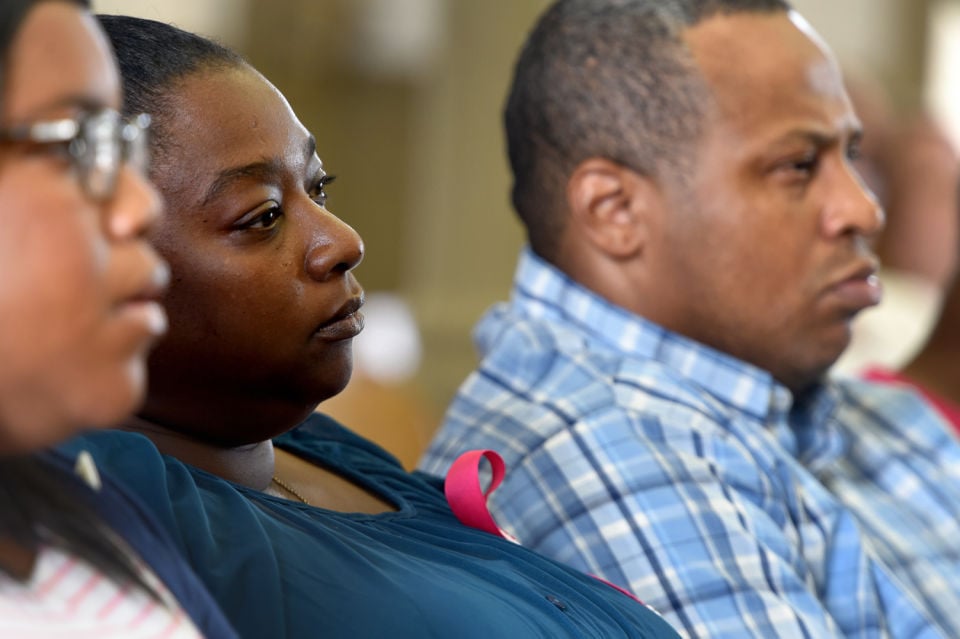 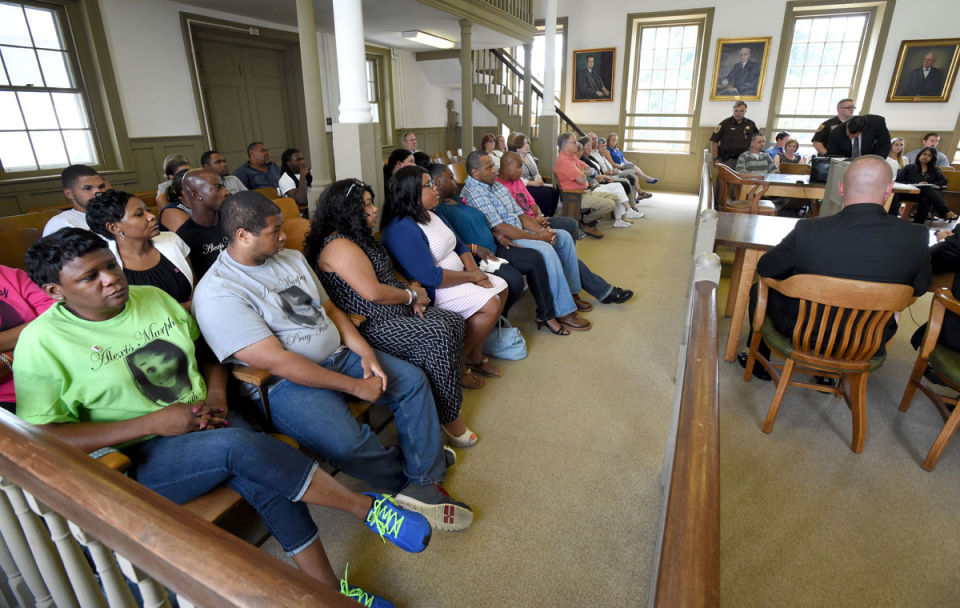 Family and friends of Alexis Murphy attend the sentencing hearing July 23, 2014 of Randy Taylor, who received two life sentences for the abduction and murder of 17-year-old Murphy. 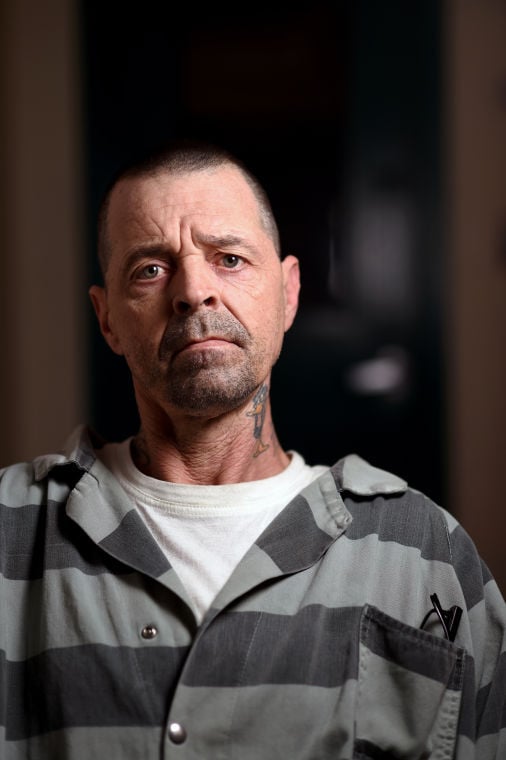 Just before handing down the sentence Wednesday, Nelson County Circuit Court Judge J. Michael Gamble asked Randy Taylor, 49, if he had anything to say.

Taylor rose from his seat, dressed in a black-and-white striped jumpsuit, tattoos peeking out from his collar and shirtsleeves.

The only words he spoke during his May trial were “not guilty.” As Taylor glanced around the court Wednesday, speaking to Gamble and the Murphy family, his message remained unchanged.

“I didn’t kill Alexis Murphy,” he said. “It’s probably one of the biggest things to happen in Nelson County, and I’m sorry to be a part of it.”

Wednesday’s hearing began with Taylor’s attorney, Mike Hallahan, filing motions asking for Gamble to set aside the jury’s verdict — guilty of one count of first-degree murder and one count of abduction with intent to defile. The jury recommended two life sentences.

“The closest the Commonwealth came to proving her death was the lack of her appearance. The evidence is clearly suspicious, but it doesn’t come close to certainty," he said.

Surveillance footage from the Liberty gas station, off U.S. 29 in Lovingston, showed Taylor and Murphy walking by one another the night of Aug. 3 when Murphy vanished.

“A homicide can be proven even though a body has not been found,” Gamble said from the judge’s bench. “The facts clearly show the source of the struggle. All of that was found inside the trailer.”

Martin called only one witness in the Wednesday hearing, Vickie Dowell, a probation officer.

Dowell interviewed Taylor twice to discuss his criminal record before the sentencing hearing.

She testified Taylor lied about some of his past criminal charges spanning multiple states, including Washington, Florida, South Carolina, Virginia and New Jersey.

Dowell said Taylor’s first offenses were property crimes committed at the age of 16 which led him to be placed in foster care for one year.

Hallahan declined to cross-examine the witness.

Before concluding his argument, Martin read from a letter written by Laura Murphy, mother of Alexis.

The letter highlighted the day-to-day struggle spanning nearly a year of a mother wondering if she would ever see her child again, and the irreparable gap left in the family.

“My whole world has revolved around finding her and bringing her home. We cried on all of the holidays because we missed her so much,” Martin read in court. “I wouldn’t wish this feeling on anyone, even Randy Taylor. Justice will be served with him never getting out of jail.”

In his closing argument, Hallahan brought forth an offer that Taylor would disclose information on Murphy’s whereabouts. Rather than two life sentences, Taylor would receive 20 years in prison.

Martin retorted that the offer already had been considered and dismissed by him and the Murphy family.

“We have definitely done our best to give this family some closure. We have to balance closure with public safety,” Martin said. “His criminal history goes for four pages.”

After Hallahan presented this offer, Taylor stood and maintained his innocence in court.

In an interview with The News & Advance, Taylor said he plans to file an appeal. He feels the judge should have ordered a change of venue and that his attorney gave a lackluster defense.

During the May trial, Hallahan did not introduce new evidence, and the defense rested after about an hour.

“It was supposed to be a two-week trial. He ran out of fuel,” Taylor said in a previous interview.

Petitions for appeal must be filed after a sentencing hearing and are presented to the Virginia Court of Appeals. A panel of three judges will then consider whether or not to overturn a verdict.

Outside the courthouse Wednesday, Murphy’s family said the end of Taylor’s hearings does not mark the end of their strife.

“We got a life sentence last August third,” said Trina Murphy, great-aunt to Alexis. “Continue to pray for us. Pray for our strength.”

Murphy’s great-aunt scoffed at the deal presented by Hallahan during the sentencing hearing.

“I’m not bargaining with a murderer,” she said. “He will never do this to another young girl or a community.”

Within two weeks, the family will mark the one year anniversary since Murphy vanished. A year ago, a young woman, lean from volleyball camp, eagerly awaited her senior year at Nelson County High School.

The night of Aug. 3, she drove her father’s car to the Liberty gas station to fill up the tank before heading to Lynchburg for hair extensions.

Now, a pink Christmas tree sits at the gas station to memorialize the girl who vanished. Weather-worn pink ribbons remain dangling from mailboxes and street signs.

Angela Taylor, Murphy’s aunt, said they plan to have a basketball tournament and candlelight vigil to honor the missing teenager.

“It didn’t stop today,” she said after the Wednesday hearing. “It will be the beginning of a healing process.”

Lengthy appeal ahead in Taylor case

Even though Randy Taylor was sentenced Wednesday to two life sentences in the death of teenager Alexis Murphy, he may have years of legal proc…

Nearly a year after Alexis Murphy went missing from Nelson County, the man convicted of abducting and murdering the 17-year-old will serve two…

Attorneys for Randy Allen Taylor and Scott Christman Miles have filed notices of appeal in the Virginia Court of Appeals in Richmond. Both men were convicted of first-degree murder.

Search for Alexis Murphy to continue next month

The search will resume next month for the remains of missing Nelson County teenager Alexis Murphy, Nelson County Sheriff David Brooks said. Public safety officials from Nelson and Orange counties will participate in the search.

The appeals process for a man convicted of killing a Nelson County teenager is moving forward.

Person of the Year: Alexis Murphy

Along with drawing even closer a tight-knit community, Alexis Murphy’s legacy can be found in the heightened awareness her case has brought to the real-life dangers of abduction for young people. For these reasons, she is The News & Advance’s Person of the Year for 2014.

The Virginia Court of Appeals has denied an appeal for the Lovingston man convicted of killing Nelson County teenager Alexis Murphy.

The diploma says Alexis Tiara Murphy, a name that has marked the fabric of Nelson County’s community like no other in the past year, and Satur…

Taylor: "I think that closure would be having the answers to this case"

Beneath a clear, azure sky, Nelson County High School seniors waited to receive their diplomas along with the family of 17-year-old Alexis Murphy.

Taylor: ‘I almost passed out’ when guilty verdict read

Alexis Murphy's family gets some closure with verdict

For almost 10 months, Laura Murphy just wanted to speak with the man accused of abducting her daughter.

Randy Taylor was ordered to serve two life sentences for the abduction and murder of 17-year-old Alexis Murphy in 2014.

Family and friends of Alexis Murphy attend the sentencing hearing July 23, 2014 of Randy Taylor, who received two life sentences for the abduction and murder of 17-year-old Murphy.