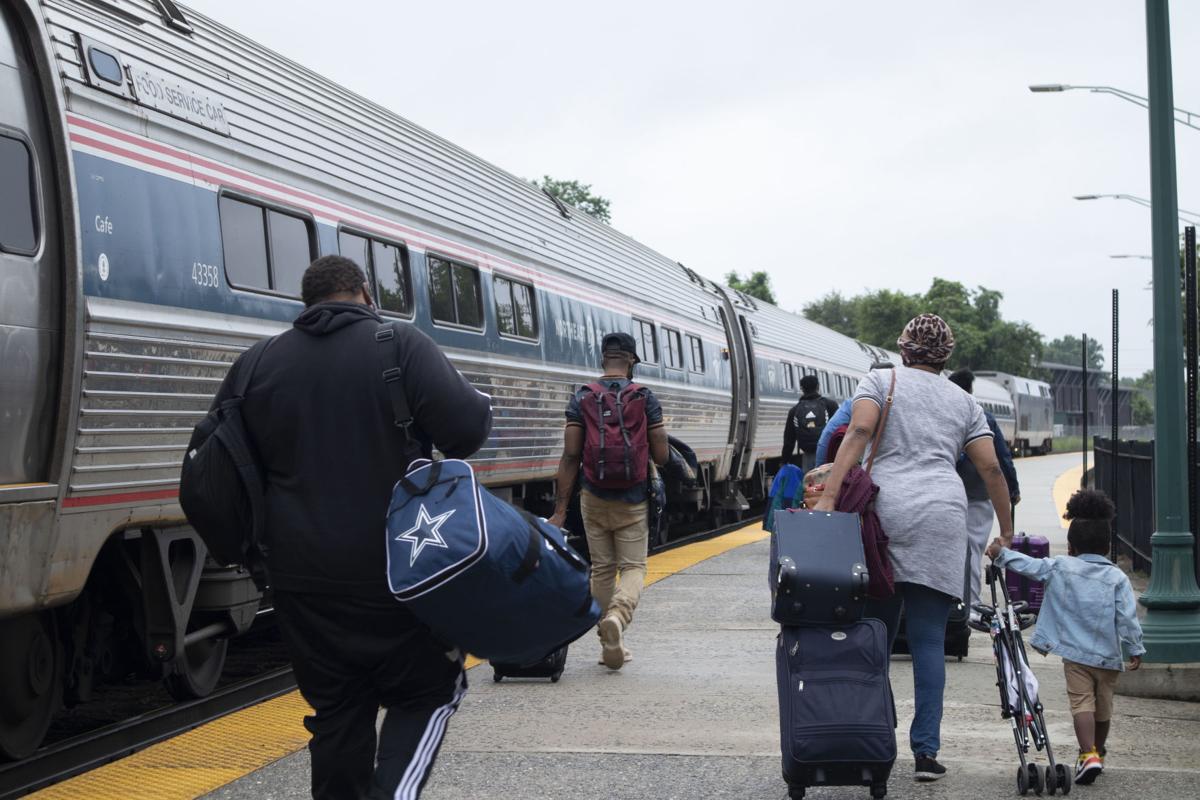 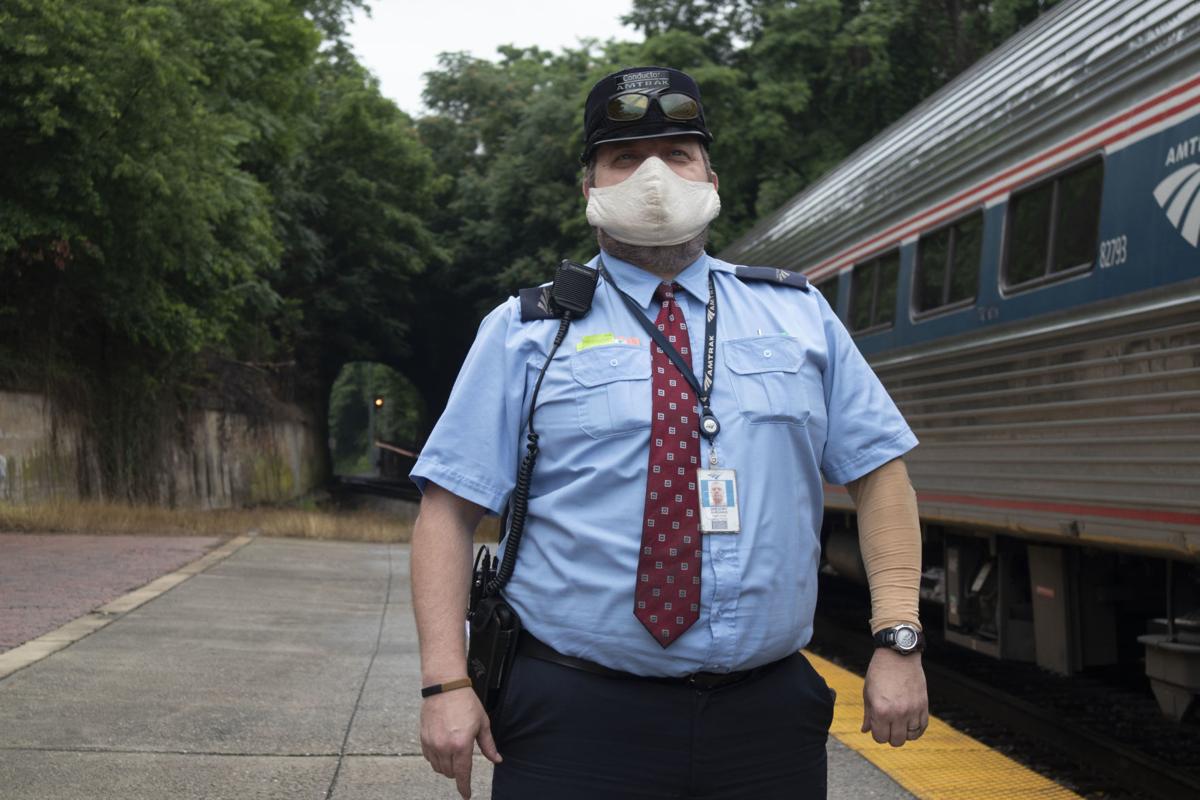 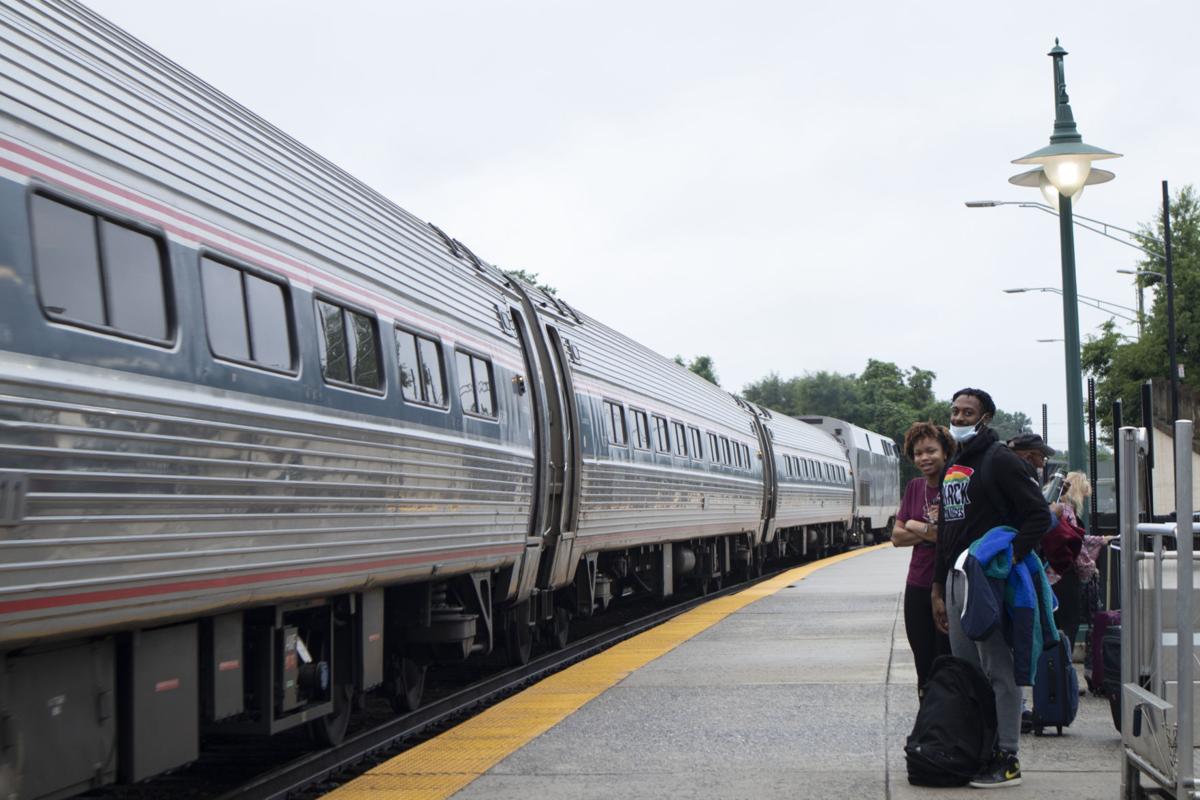 A couple waits for the Amtrak train to begin boarding on Friday morning, June 20, at Kemper Street Station in Lynchburg.

Ridership on Amtrak for both the Lynchburg and Roanoke legs has declined significantly in recent months as the areas grapple with the COVID-19 pandemic.

For more than a decade, the Commonwealth of Virginia and Amtrak have offered passenger rail service between Lynchburg’s Kemper Station and Union Station in Washington, D.C.

Amtrak receives funding from Virginia for the Northeast Regional trains that serve Lynchburg, Roanoke and other cities, such as Richmond, Newport News and Norfolk, Amtrak spokesperson Kimberly Woods said.

According to Haley Glynn, a public relations specialist with the Virginia Department of Rail and Public Transportation (DRPT), service reduction on three Virginia- sponsored routes was implemented April 1.

Under a federal policy, states pay 100% of costs directly associated with their service to physically run the train. Amtrak shares in the other costs such as policing, scheduling and dispatching. Virginia pays for Amtrak-owned equipment based on how many units of equipment it uses, similar to a lease payment, Glynn said.

“Amtrak owns the equipment; we pay to run the service,” Glynn said.

Route 46, with round-trip service from Washington D.C. to Roanoke, including a Lynchburg stop, is the only Amtrak Virginia-sponsored route operating at full service during the pandemic. It continues to run one northbound and one southbound train daily. Full service is anticipated to resume Sept. 1 with Amtrak maintaining 50% capacity on trains to ensure social distancing.

“We only have actual ridership numbers through the end of April, but year-to-date ridership is down 15% on Route 46 compared to 2019 data,” Glynn said. “Prior to the pandemic, Amtrak ridership in Virginia was growing steadily. Since the pandemic began, ridership for March, April, and May compared to 2019 has been down in the 90 percentiles; however, a slow recovery has already begun.”

It costs approximately $9.6 million a year to run the Route 46 train, Glynn said, but much of that cost to Virginia is offset by ticket revenue.

In 2019, ticket revenues on the Route 46 train were about $10 million. Glynn said much of the state’s funding concerns will be offset by the CARES Act, which capped state payment to Amtrak at no more than 80% of fiscal year 2019 operating costs.

“While COVID has certainly had an impact on revenue and ridership, the strong winter ridership and a return to normal travel patterns in Phase 3, we are hopeful that the Roanoke train’s popularity, plus the CARES Act supplement, means the Roanoke train will once again operate in the black this year,” Glynn said.

Virginia Secretary of Transportation Shannon Valentine said since the first Virginia-sponsored train launched in Lynchburg in 2009, the rail has played an integral role in the transportation system.

“While every industry sector is managing the impacts of COVID-19,” Valentine said, “we continue to focus our efforts on building a safer, more efficient multimodal network — connecting people and promoting the Commonwealth’s economic recovery.”

The Bedford County School Board voted 4-2 at its Thursday meeting to amend the division's code of student conduct to add language specifically prohibiting attire that is “racially/culturally divisive,” including the Confederate flag.

A couple waits for the Amtrak train to begin boarding on Friday morning, June 20, at Kemper Street Station in Lynchburg.