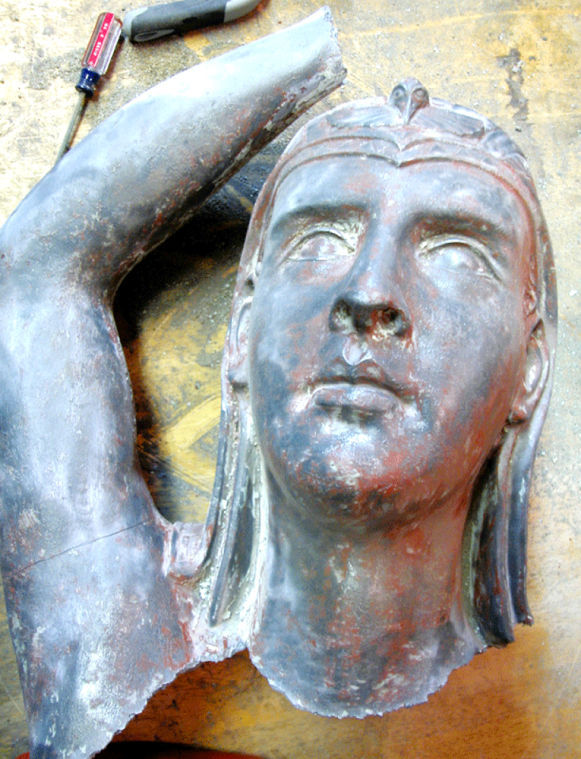 The Water Bearer, a life-size zinc figure, was purchased from a catalog for the princely sum of $500 in 1883 and installed at the downtown reservoir. The reservoir long since has closed, but the Water Bearer remained in place before it was discovered lying in broken pieces.

The Water Bearer statue is shown in this file photo.

It was July 18, 1829. And, as locals tell it, just about all of Lynchburg, Virginia, had assembled to watch the new city reservoir fill with water.

An engineer had built a horseshoe dam across the James River. A canal led from the dam to the water wheel-powered pump station that would supply the reservoir. But when townspeople lowered a boy into the water-storage area to check, nothing was there.

On the third trip down, he yelled: "Here she is, draw me up quick!"

More than 50 years later, city officials ordered a seven-foot-tall zinc statue titled "The Water Bearer" from a catalog and put it on display to symbolize the events of that July day. The female figure — perhaps Egyptian, but subject to debate — cost $500 and stood balanced on one foot with a large jug of water on her left shoulder.

By 2012, the Water Bearer lay crumbled in pieces on the paved-over remnants of Lynchburg's reservoir.

Some blame human agency for the Water Bearer's downfall. "When I got there, there's a pedestal that the statue typically sits on, and the cover plate was gone, like someone had tried to remove it," said Tim Mitchell, the city's director of water resources.

Others, such as Sally Ann Schneider, executive director of the Lynchburg Historical Foundation, think the statue — often referred to as "she" — toppled over from its own weight (an estimated 300 to 400 pounds) after standing for nearly 130 years.

"She's not a lightweight by any means," said Schneider, who added that an artist found stress fractures on the Water Bearer's ankles.

After the toppled statue's discovery, Lynchburg's Water Bearer sat on a flatbed in the basement of the city's water department while officials debated what to do next. The statue's reconstruction and its cost were potential hurdles.

The Lynchburg Historical Foundation joined the effort, raising $40,000 for the project. The new work will stand near the James River, Schneider said. Lynchburg officials say the original fragments, which remain at the city water department, may find a permanent home in an area museum.

The issue of whether pieces such as Lynchburg's should be restored or replicated is a complicated one.

Conservators such as Carol Grissom from the Smithsonian Museum Conservation Institute think the statue should have been rejoined instead of recast because it is one of a kind. Grissom, who studies zinc statues and collects historical catalogs, said she has never seen anything like it. It appears to have been produced by the former Monumental Bronze Co. or one of its affiliates, she said.

But Schneider said that the city would rather have a re-creation of the statue than no statue at all. "The historical significance is gone, yes," Schneider said. "But she's created a new history of her own."

To undertake the statue's reconstruction, the department called in artist Ken Faraoni, 48, of Alexandria, Virginia, who taught himself how to sculpt after seeing the special-effects models in "Star Wars" when he was 10. Faraoni ultimately decided that rather than attempting to reassemble the piece — which he deemed irreparable — he would start from scratch and recast it in bronze.

He said officials told him it would be impossible, and that's what intrigued him.

Faraoni, who worked in four studios and traveled more than 4,000 miles in the course of reconstructing the piece, said that for him, it was all about never giving up.

"I think to be good at any of this kind of stuff, it's not about talent, it's not about any of that stuff," said Faraoni, who lived in Lynchburg for several years. "It's about continuing to go until you're finished. And that's what happened — I'm like a bulldog. Once I get something in my teeth, it's like I'm not going to let go until I'm finished with it."

Faraoni used a technique called "lost-wax casting" to re-create the statue. He started by removing several layers of paint, then created about 30 rubber molds backed with plaster and poured casting wax into them. Once he cleaned up the wax, he took the pieces to a foundry in Colorado.

There, Faraoni put together the wax pieces and the "spruing" process began — attaching channels that allowed the metal to flow into the mold. A ceramic shell was created around the wax, and the pieces were placed in an oven — a process that helps melt the wax so the bronze can be poured in. Once the poured bronze had cooled, the ceramic pieces were hit with a hammer, and the bronze recasting was left behind.

Back in Virginia, Faraoni began the painstaking procedure of smoothing out the recasting, which he said looked like Frankenstein. A woman who works near his studio stopped by for a quick preview last week. "Oh, wow — that's nice!" she said.

People who see the re-created work tend to do double takes, Faraoni said, as if it might suddenly disappear.

It took him two years, but he's finally finished. Just a little bit of polishing and a couple of coats of lacquer are all that's left to do before the statue's unveiling next month.

"It's salvaging a piece of our history," said Lynchburg Mayor Michael A. Gillette. "We're looking forward to the day when we can take that statue, which used to adorn a city facility years and years ago, and put it back in a place where our citizens will be able to see it."

Pfizer shot expands to US children as young as 12

The bronze Water Bearer carried its burden undaunted by the heat of the afternoon sun.

While driving through Lynchburg on the way to visit their son at the University of North Carolina Asheville in 1999, Jeffery and Sally Schneid…

Step by painstaking step, efforts to recreate Lynchburg’s oldest piece of public art -- the Water Bearer, a life-size zinc figure purchased from a catalog in 1883 -- are coming together.

Hopes of fixing the shattered Water Bearer statue that once reigned over the old city reservoir downtown have taken a new turn.

As it turned out, the Greek Water Bearer statue that once stood next to the Old City Reservoir on Clay Street wasn’t a victim of vandalism, af…

Why you should know him: The 45-year-old Lynchburg-based sculptor recently repaired the damaged Doughboy statue that sits at the base of Monum…

The Water Bearer, a life-size zinc figure, was purchased from a catalog for the princely sum of $500 in 1883 and installed at the downtown reservoir. The reservoir long since has closed, but the Water Bearer remained in place before it was discovered lying in broken pieces.

The Water Bearer statue is shown in this file photo.