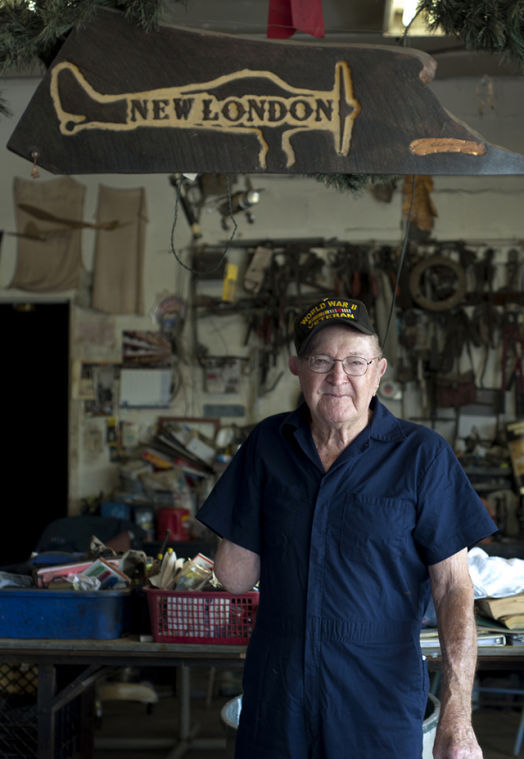 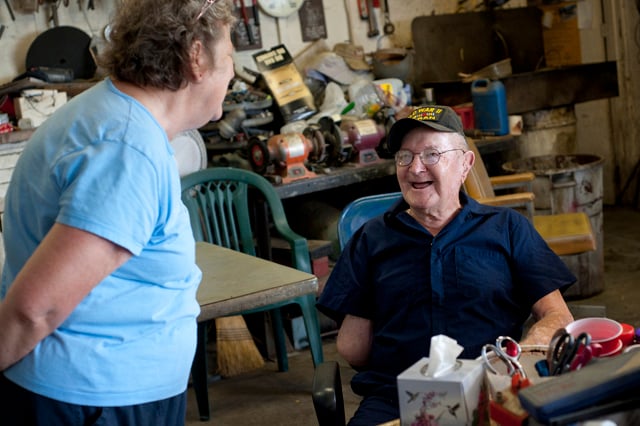 Rucker Tibbs greets a friend during a reception at the New London Airport in Forest, Va., July 6, 2013. (Photo by Parker Michels-Boyce/The News & Advance)

NEW LONDON — There was really only one place to properly honor Rucker Tibbs. Not in a hotel meeting room or restaurant banquet hall, but in his natural habitat — the New London Airport.

So on Saturday, dozens of Tibbs’ friends and aviation associates showed up at the main repair shop at the small Bedford County airfield, a room with deep gouges in the ancient concrete floor and airplane engines hanging from the rafters like decorations.

This was an affair not only to acknowledge what Tibbs has meant to the airport and local aviation in general, but also to benefit the Friends of New London in its quest to reconstruct the 250-year-old Meade Tavern. There was no admission to the event, which featured singer Mel Parker, but a small charge for the pizza and ice cream.

“Rucker has always been very civic minded,” said Carl Stinnett, one of those paying homage to the 89-year-old flyer, flight instructor and mechanic.

Tibbs estimates he has sat next to over 900 pilots when they made their first solo flight, including a couple who went on to fly for commercial airlines. Over that time, he has piled up some amazing numbers, including over 5,000 hours in his beloved 1939 Piper J-4. That plane has become an extension of its owner — small, feisty and all but indestructible.

“He was a great instructor,” said Don Ashwell, a former student, on Saturday. “Very relaxed. He focused a lot on what to do in the case of emergencies. You’d be flying the plane, and he would reach over and turn the ignition off, to see what you’d do.”

“I flew with him when I was young,” Stinnett added, “and he said flying over rivers and railroad tracks would make the plane jump a little. Of course, I believed him. He really caused the jumps himself.”

Tibbs was a Army mechanic before he was a pilot, working on tractor engines in California during World War II. Talked into flying by a friend, he soloed in 1955 and became a fixture in the Civil Air Patrol.

“We haven’t sent any (CAP) flights out in the last few years,” Tibbs said, “because there haven’t been any crashes. That’s a good thing.”

A member of the Virginia Aviation Hall of Fame, Tibbs flew around the perimeter of the United States in his J-4 in 1993, landing in 34 states and logging over 7,000 miles.

He has never crashed, despite all his air miles, but does recall having to set airplanes down in convenient fields “probably around nine times

“I’d look for a big field with a brick house,” he said. “A brick house meant the people probably could afford a telephone.”

Ironically, while Tibbs’ one brush with death involved a plane, it happened on the ground. In January of 1998, he was doing some engine work at New London when he tripped over an air hose and fell into a moving propeller. The prop sheared off most of his right arm and left Tibbs with other serious injuries and massive blood loss.

“The weather was bad, so they couldn’t fly me up to UVa,” Tibbs recalled. “They had to use an ambulance, and the ambulance guys kept talking to me the whole way, asking what I thought were stupid questions. Later, I found out that was so they could tell if I was slipping away or not.

“When they opened the ambulance doors in Charlotesville, a nurse looked in and said, ‘Oh, my God.’ That’s the last thing I heard for 16 days.”

Within a year, Tibbs resumed flying.

He was given a Lifetime Achievement plaque by the Friends of New London on Saturday and sat in a corner of the shop as visitors stopped by to extend congratulations and swap stories. Nearby, his daughter Janet looked on proudly from a picnic table.

Did she follow her father’s example and take to the skies?

Tucked at the end of Irvington Springs Road is a secret garden.

Not so secret really, but some compare visiting the flower farm to finding the speakeasies of the Prohibition era. Visitors drive down a secluded gravel drive tucked off Boonsboro Road that ends at the flower farm, where bouquets can be purchased on the honor system with cash or credit card.

A fertility doctor who used to work part time in Lynchburg more than a decade ago is being sued in California for fraud by way of “medical rape.”

Our latest batch of public records: property transfers for Lynchburg and the surrounding counties, plus building permits for Amherst County.

Rucker Tibbs greets a friend during a reception at the New London Airport in Forest, Va., July 6, 2013. (Photo by Parker Michels-Boyce/The News & Advance)