A map of phase one of Lynchburg's conversion to two-way traffic, and subsequent road closures and detours. 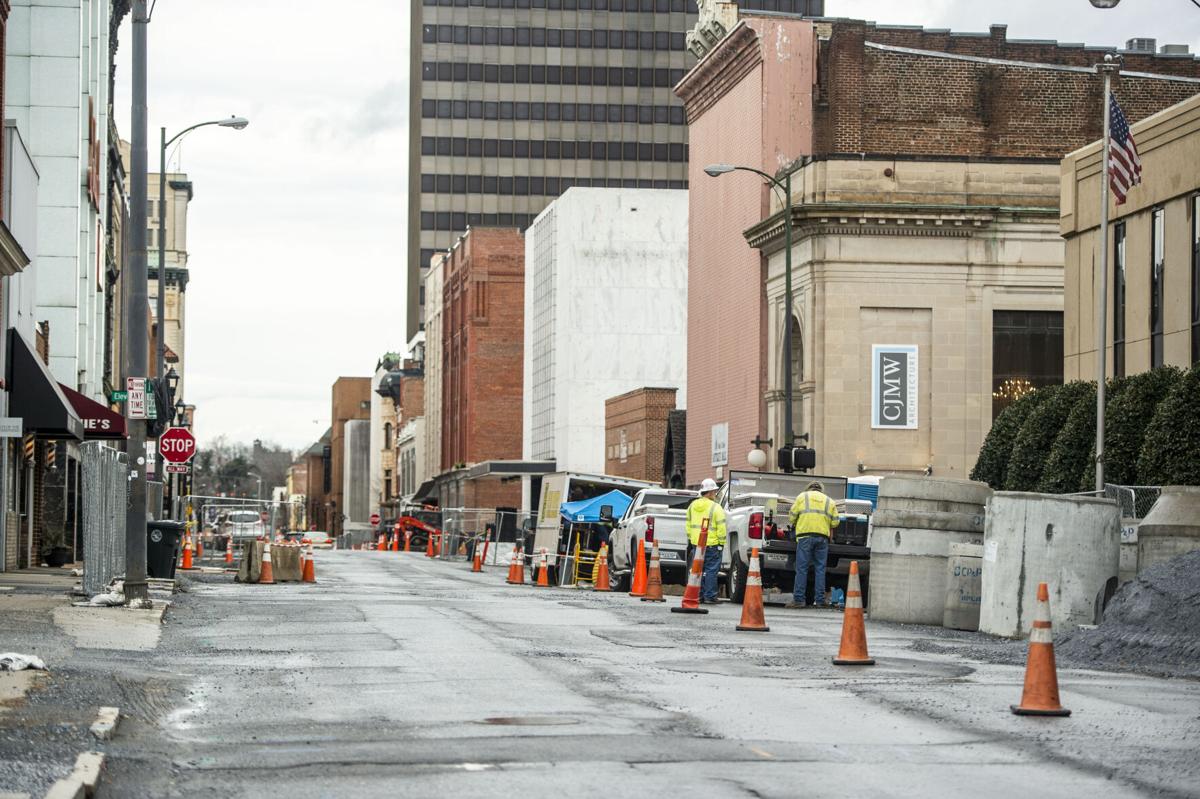 In this March 1 file photo, construction continues along Main Street in Lynchburg.

Over the next several months, two-way traffic will return to Main Street and Church Street in downtown Lynchburg for the first time in decades.

Also part of phase one, the 1100 block of Main Street will remain closed to all traffic to allow construction of the “arrive pad,” a geometric pattern of tiled pavers.

According to a news release sent out by the city Monday, the purpose for restoring two-way traffic is multifaceted; however, the all-encompassing factor is to create a downtown environment that is more comfortable for pedestrians.

As part of the 2040 Downtown Master Plan adopted by Lynchburg City Council in November 2018, two-way traffic will encourage vehicles to move through downtown at a much slower speed, providing a safer environment for the “living, working, shopping, eating and relaxing” that have become paramount to Lynchburg’s growing downtown.

Additional factors in the decision, according to the release, include increases business visibility to drivers, more efficient vehicle circulation, less confusing roadways for visitors and less turning movements.

Information about phases two and three — which are slated for the end of September — can be found at lynchburgva.gov.

A dozen anonymous women have filed a lawsuit against Liberty University, claiming its policies have allowed for a hostile campus culture that …

The Appomattox County Sheriff's Office has identified a man who died in a Spout Spring shooting on Wednesday.

Proposed development of a new townhouse complex in Forest was met with some community opposition at Tuesday’s Bedford County Planning Commission meeting.

A woman who ran the now-shuttered Bull Branch restaurant in downtown Lynchburg was ordered on Wednesday to pay more than $5,000 in restitution for years of unpaid meals taxes.

The case of a Lynchburg man charged in a Cabell Street shooting earlier this year will go before a grand jury, a judge decided Monday.

Man charged with murder after shooting in Spout Spring

A Spout Spring man has been arrested and charged with second-degree murder after a Wednesday afternoon shooting.

"What we do impacts a lot of different people. I think it's a good feeling to know that you are making a difference, and two, that you are doing it the right way," said Steve Jester.

A map of phase one of Lynchburg's conversion to two-way traffic, and subsequent road closures and detours.

In this March 1 file photo, construction continues along Main Street in Lynchburg.