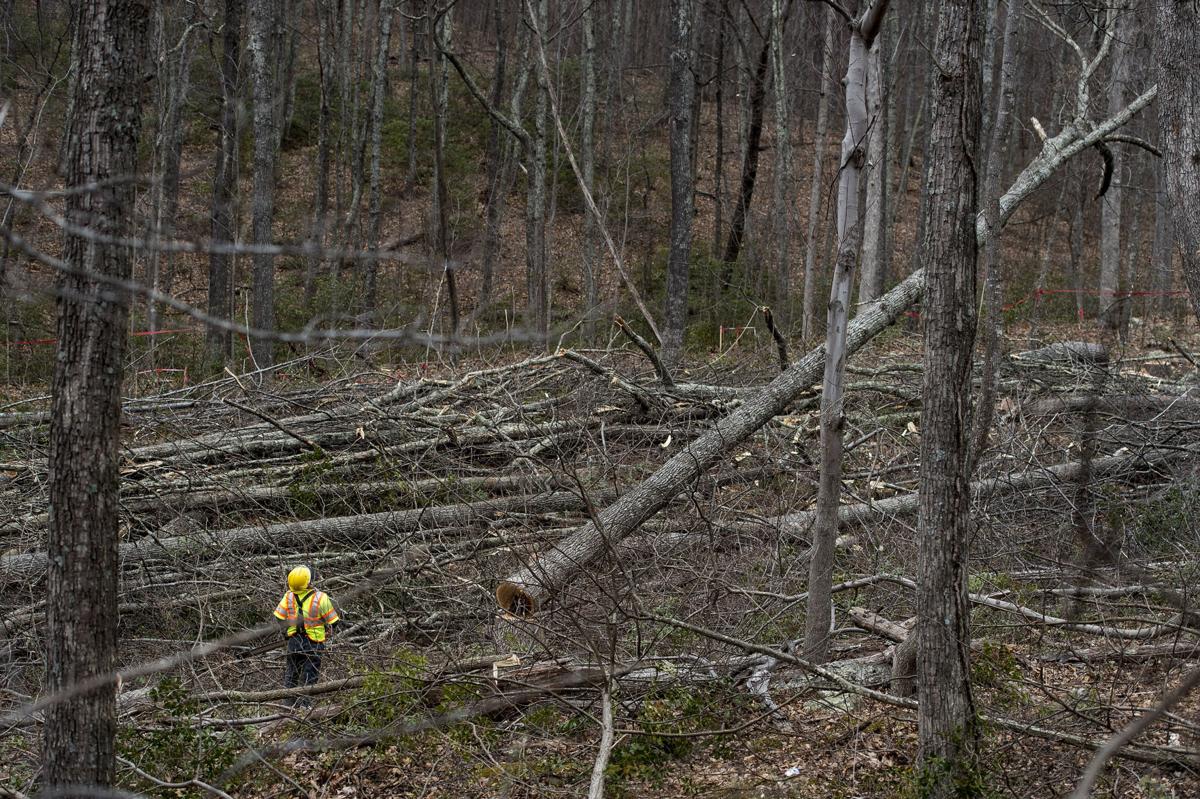 Update: The Atlantic Coast Pipeline took another step toward construction Tuesday, when crews began cutting down trees in Nelson County to make way for the interstate natural gas project.

Tuesday marked the first time pre-construction activities took place in Nelson County, though tree-felling has been happening for several weeks elsewhere along the 600-mile route that runs through West Virginia, Virginia and North Carolina, including about 27 miles in Nelson.

Non-mechanized is defined as “the use of equipment that can be operated and carried by hand, by an individual,” according to Federal Energy Regulatory Commission filings on the project.

WPOA allowed ACP immediate access to its property to begin tree-felling after ACP filed an eminent domain suit against it in federal court.

“The Wintergreen Property Owners Association (WPOA), while opposed to the location of the Atlantic Coast Pipeline, understands and abides by the legal process that has led to the commencement of tree removal on WPOA property,” WPOA said in a statement emailed to media Tuesday.

“While disappointed, the beginning of construction only increases our resolve to hold [lead ACP partner] Dominion [Energy] accountable for the financial and non-financial implications placed on our community by the presence of the pipeline. WPOA is committed to the best possible outcome for our community; one that provides fair treatment and security for our owners, employees and guests.”

WPOA had prepared for the possibility of protests near the properties in response to the tree-felling, given many Nelson residents’ vocal opposition to the project. WPOA made members of the association aware in a letter last week Wintergreen Police “would be called to enforce the peace” through “verbal warnings, court summons, and arrests if necessary” if any incident occurred or in the case of criminal activity.

Reached by phone Tuesday morning, Lindsay Birckhead, Wintergreen Police’s administrator, said the department had not responded to any incidents related to the tree-felling.

The Nelson County Sheriff’s Office could not be reached Tuesday to say whether it had received or responded to calls, but Nelson County Administrator Stephen Carter said Tuesday afternoon he was unaware of any incidents related to the tree-felling.

Only a handful of passersby stopped to survey the scene Tuesday, with disappointment from pipeline opponents mostly contained to social media.

Richard Averitt, a Nelson County landowner on the route of the pipeline, was near the tree-felling sites Tuesday morning, broadcasting a video of the activity and his opposition to the project via Facebook.

His video, shared on Facebook hundreds of times by individuals and anti-pipeline groups across the state, garnered more than 9,000 views by Tuesday afternoon and drew dozens of comments from pipeline foes.

Among many worries shared in the video, Averitt said he is concerned about tree-felling beginning before all state permits have been received.

ACP is allowed by FERC to commence tree-felling through non-mechanized methods on land for which it has signed easement agreements or by virtue of a recent federal court order granting immediate access for the activity.

Until the Virginia Department of Environmental Quality approves stormwater management and erosion and sediment control plans, though, ACP cannot conduct mechanized tree-felling in the commonwealth.

While the current tree-felling in Nelson is fully sanctioned, in a phone interview, Averitt contended, “Just because this whole process is legal doesn’t make it right.”

“This whole process is being railroaded by putting Dominion’s desires to get the project moving way ahead of any rational protections for the citizens and the environment,” Averitt said.

Averitt called the tree-felling “a complete travesty” and said the activity “just makes me sick to my stomach.”

“There’s no putting [the trees] back,” he added.

“And it only strengthens my resolve to win,” he added. “We’re not gonna let this happen. … We’re going to do what it takes to legally stop this pipeline. … We’re not done. This doesn’t make me quit. This makes me all the more resolved to fight and beat this pipeline, to not be a victim of this kind of corporate abuse.”

The tree-felling in Nelson comes one day after FERC granted ACP a “limited notice to proceed,” allowing it to conduct non-mechanized tree-felling in wetlands in the pipeline right of way in Virginia. ACP previously was not allowed to cut trees within 50 feet of wetlands.

Additionally, on Friday, the U.S. Forest Service approved a request by ACP to begin non-mechanized tree-felling on National Forest System lands on the route in Virginia and West Virginia.

ACP cannot begin such activity until it receives another “limited notice to proceed” on that front from FERC. ACP requested that notice last Friday, as well.

On Tuesday, weeks after pre-construction activities for the Atlantic Coast Pipeline began elsewhere along the route, trees began falling in Ne…

As many as 2,400 pipeline workers will train at six community colleges that are near the pipeline.

More than a year ago, as he was attempting to fend off a primary challenge from an opponent dead set against the Atlantic Coast and Mountain Valley pipelines, then-Lt. Gov. Ralph Northam called for the contentious projects to “be held to the highest environmental standards” in a letter to the state’s environmental agency.

Thanks to a federal court opinion issued Thursday, tree-felling along the route of the Atlantic Coast Pipeline now will begin on more than a d…

Hours before their case was scheduled to go before a federal judge, Will and Lilia Fenton, owners of the Nelson County-based Fenton Inn, reach…

Duke Energy, a 47 percent partner in the 600-mile Dominion Energy-led Atlantic Coast Pipeline, says it expects the cost of the project to increase by up to $1.5 billion before the expected completion date in late 2019.

The Quagmire of Eminent Domain and Pipelines

After negotiations over compensation came to a standstill, in the last two weeks, two Nelson County parties have been sued by the Atlantic Coa…

Amid a flurry of activity surrounding the project during the past couple of weeks, the Atlantic Coast Pipeline recently received a set of impo…