Va. barely missed annual records for heat and rain in 2020, but the combination was unprecedented
Share this
{{featured_button_text}}
1 of 6 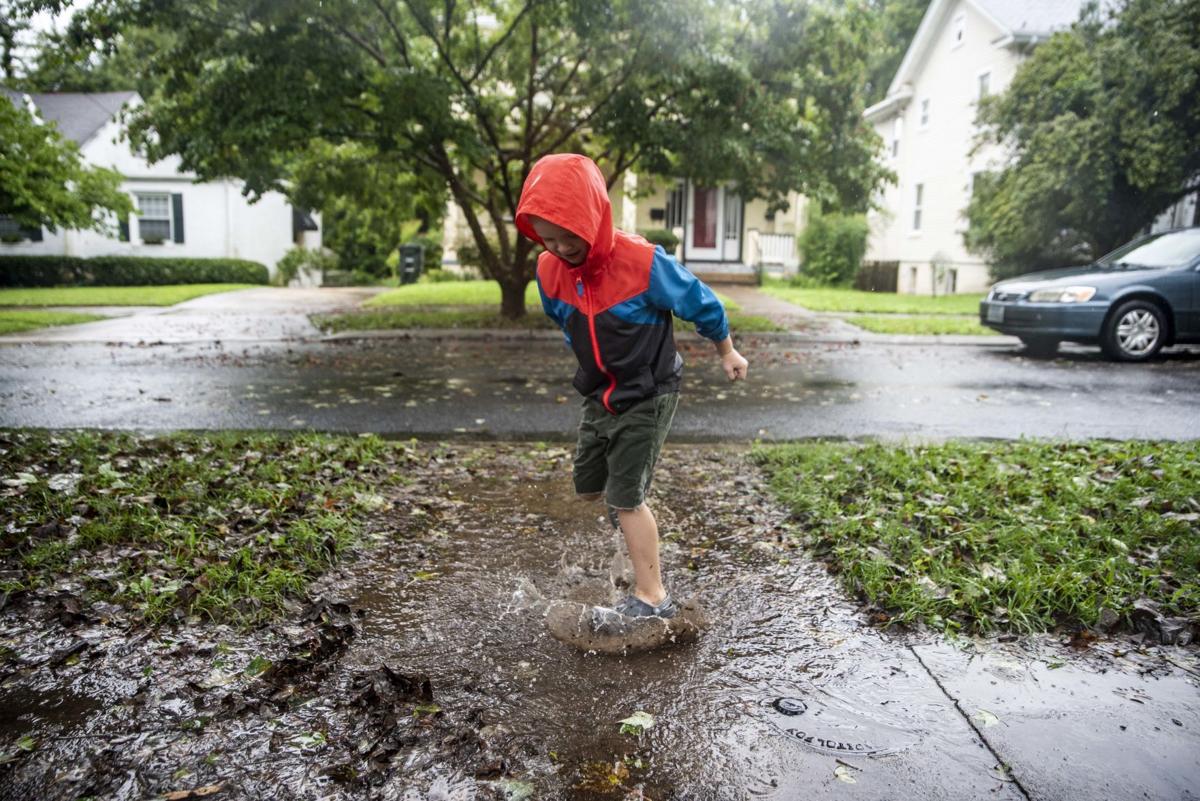 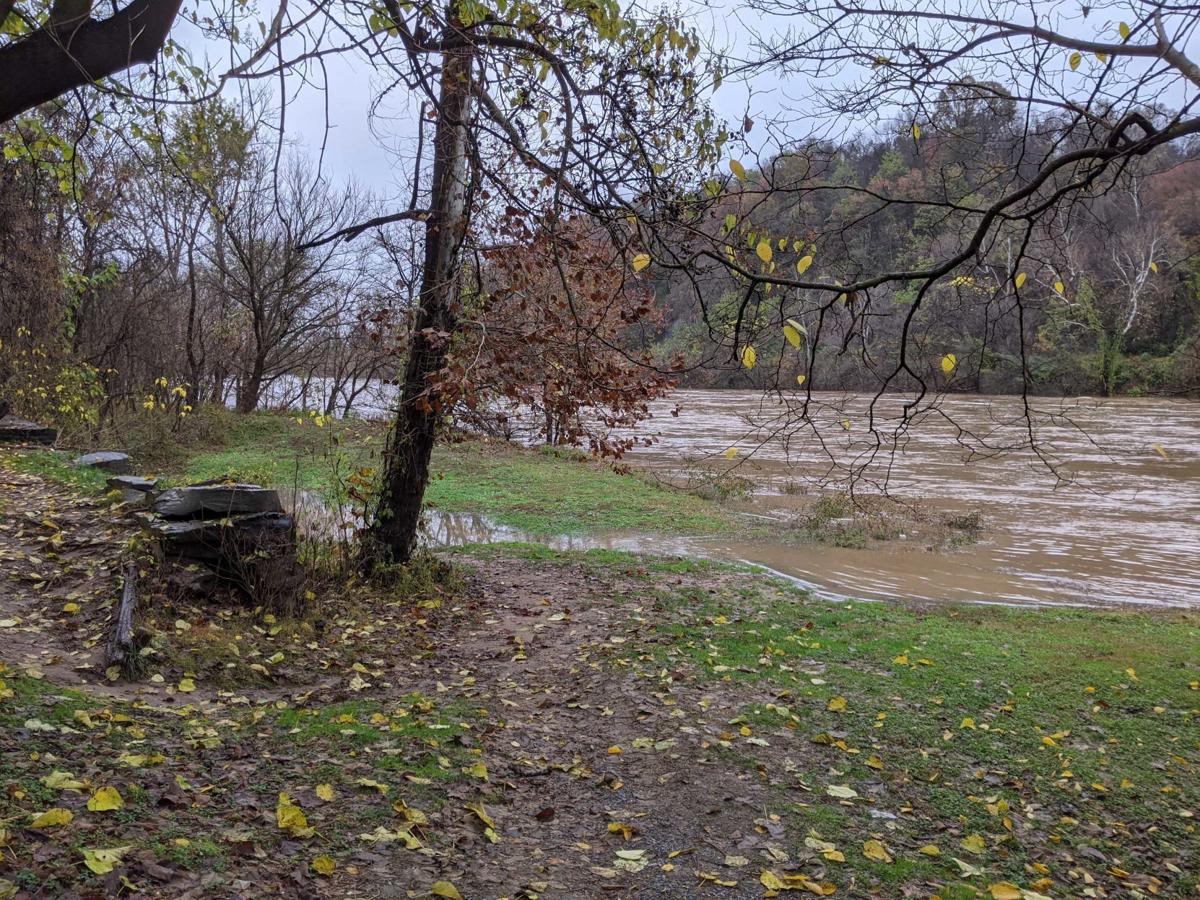 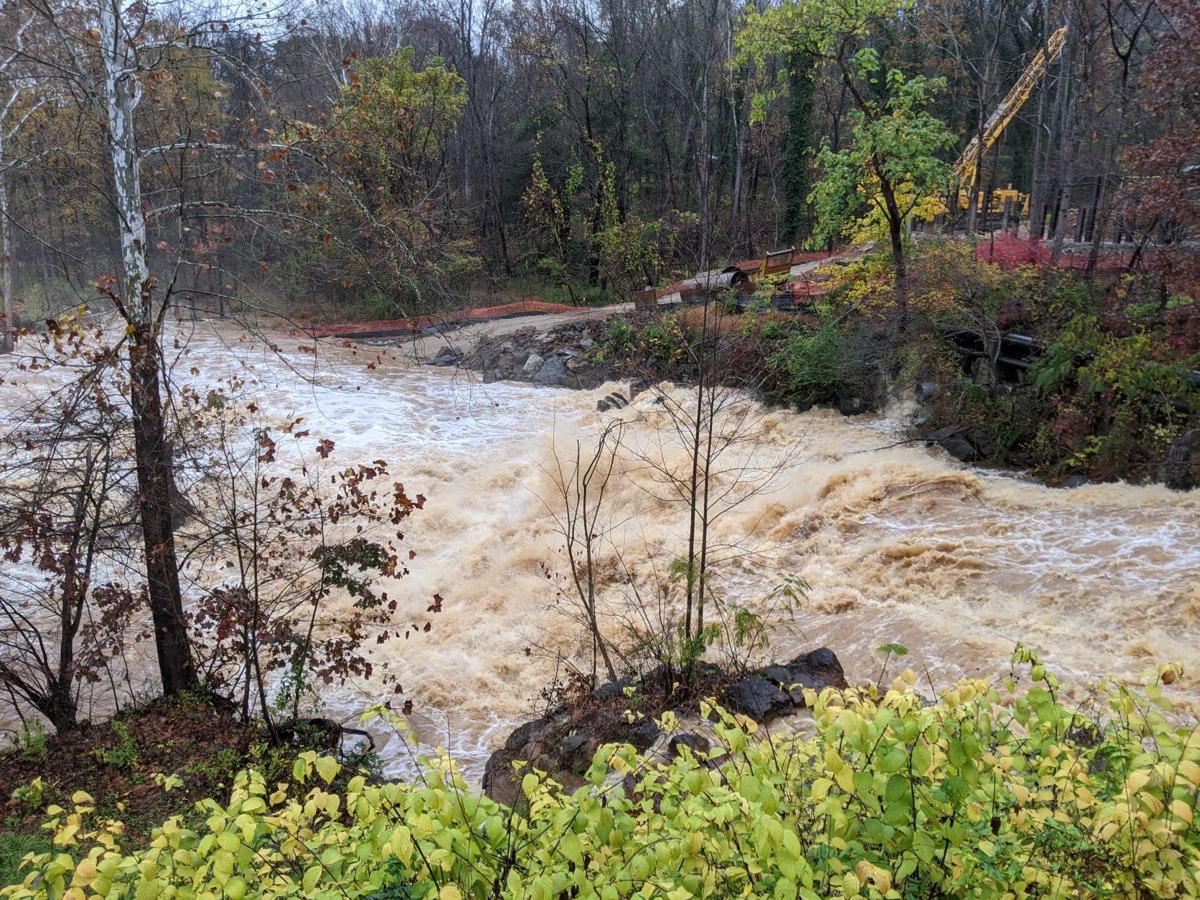 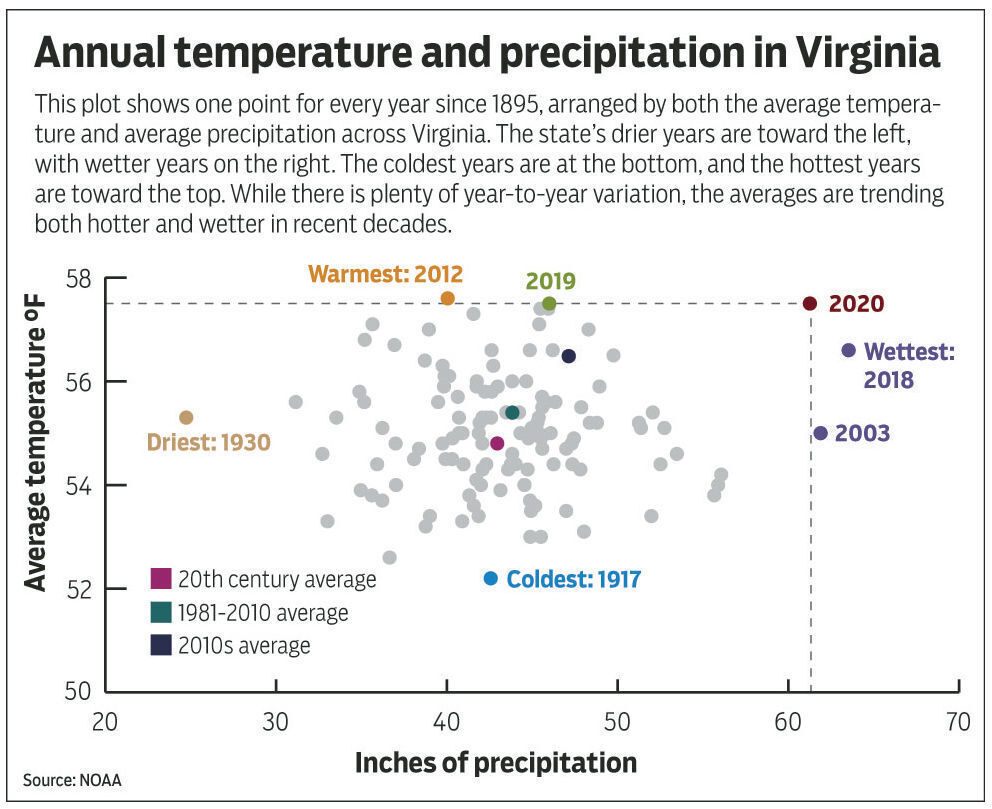 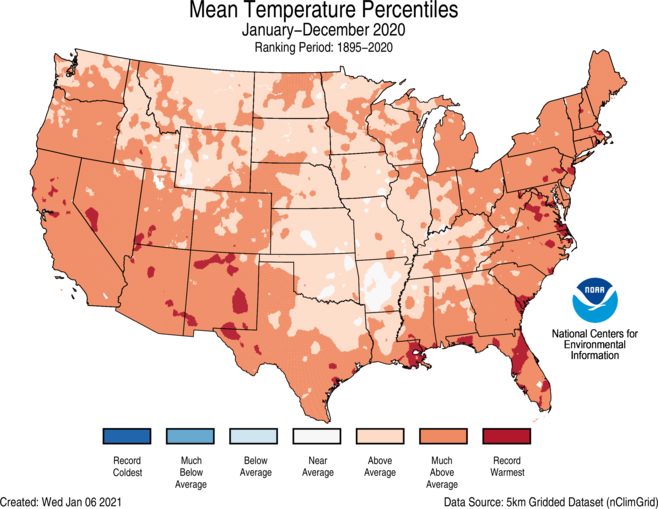 Mean annual temperature percentiles across the United States in 2020. Portions of Virginia in dark red saw their record-warmest year, but all regions were well above the 20th century average. 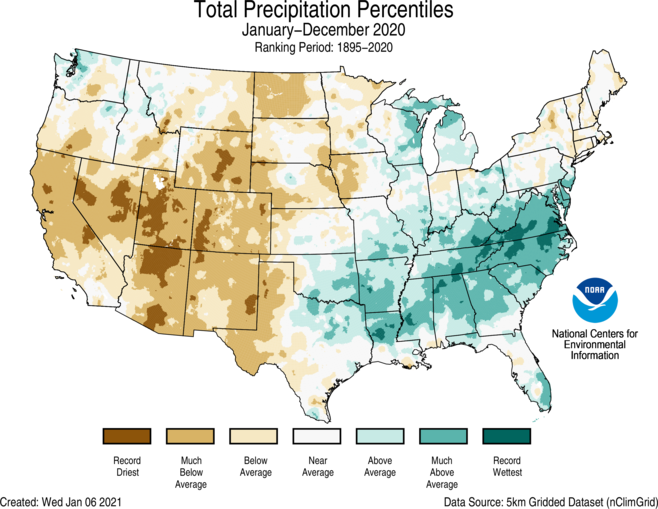 Nationwide precipitation percentiles for 2020 show a stark difference between record dryness (brown) across many western states, and record wetness (dark green) in the southeast and parts of Virginia.

Last year was nearly the warmest and wettest year on record for Virginia, and the overlap of both extremes pushed 2020 into entirely new territory compared with our weather history.

The stubborn wetness led to floods in every region of the commonwealth, while the excess warmth offered further evidence of a climate undergoing rapid change.

Those and other figures released by the National Oceanic and Atmospheric Administration on Jan. 8 told a tale of stark anomalies around the country: a saturated Southeast due in large part to record hurricane activity, a parched West suffering from record wildfires and mounting warmth from coast to coast.

Last week, scientists at Europe’s Copernicus Climate Change Service announced 2020 tied 2016 for the planet’s hottest year of the industrial era. NOAA’s analysis of worldwide data in 2020 will be released this week. It’s also likely to show 2020 achieved near-record global warmth despite the absence of a temperature-boosting El Niño pattern, which was on display in 2016. Heat-trapping carbon dioxide concentrations still increased to new highs in 2020 according to the European report, albeit at a slower growth rate than in 2019.

Cross-country comparisonsThough Virginia wasn’t the rainiest state outright during 2020, it was the most anomalously wet state compared to normal.

Meanwhile, California — in serious need of more rain and snow — was the most anomalously dry state. Moisture was missing elsewhere across the west. Two states, Nevada and Utah, recorded an all-time low amount of average precipitation in 2020. No state saw a record-wet year, though nearby North Carolina ranked second.

For temperatures, the nationwide picture was far more uniform: excess warmth appeared from coast to coast. No state had a record-hot year, but like Virginia nine other states landed in second place. No state was colder than normal.

Virginia’s temperaturesWhile 2020 fell just short of being the hottest year when averaged across the entire state, dozens of counties and cities in the central, eastern and northern tiers of Virginia registered record-high average temperatures during 2020.

Broken down by month, only April, May and September were cooler than usual for Virginia. Relative to historic levels, the most unusual warmth appeared in March.

Now, six of the state’s ten warmest years have occurred since 2011, and nine of those ten were since 1990.

So far in the 21st century, the only year that came in colder than Virginia’s 20th century average was 2014.

In another telltale manifestation of climate change, daily low temperatures continue to trend upwards faster than the highs.

For the fourth consecutive year, Virginia’s average low temperatures were the warmest on record. The statewide average in 2020 was 47.2 degrees, which beat 2019’s record of 46.8. The last year with statewide lows below the 20th century baseline was 1997.

But high temperatures, while well above the 20th century average, weren’t quite so exceptional in comparison to other years. The annual average worked out to 67.7 degrees, which landed in a tie for 15th highest. The hottest year for highs was 1990.

Virginia’s precipitationWhile 2020 was not Virginia’s wettest year as a whole, some areas within the state did see record precipitation levels. Last year was the wettest-ever for many southeastern, central and southwestern locales — often where flooding was worst — and solidly above-normal in Richmond and every other region.

In Virginia, only the months of March and July were drier than usual. August had the greatest excess.

Our region’s long-term trend for precipitation isn’t quite as stark or steady as the warming, but it does raise flags that the three wettest years on record were in this century. The past decade brought only two dry years: 2012 and 2017.

Oscillating weather patterns rooted in the Pacific Ocean drive much of the monthly, seasonal and yearly change here. But higher baseline ocean and air temperatures load rainstorms with more water vapor, which means our wet days are getting wetter than before, and so are our wet years.

Weather by the monthA handful of months cracked their respective top ten for warmth and wetness, but none were in the lowest tiers of cold or dryness.

For precipitation, February tied for seventh-wettest, April was fifth-wettest and August was seventh-wettest since 1895. Virginia saw its tenth-warmest February, fifth-warmest March and fifth-warmest November. Only one month set an all-time record, though it was a huge one: at 78.7 degrees, July tied 2012 for Virginia’s hottest month.

Movies in a Minute: "The Little Things"

Movies in a Minute: "One Night in Miami"

Movies in a Minute: "One Night in Miami"

Northam on Va. vaccine rollout: 'No question that we need to speed the process up'

Northam on Va. vaccine rollout: 'No question that we need to speed the process up'

Mean annual temperature percentiles across the United States in 2020. Portions of Virginia in dark red saw their record-warmest year, but all regions were well above the 20th century average.

Nationwide precipitation percentiles for 2020 show a stark difference between record dryness (brown) across many western states, and record wetness (dark green) in the southeast and parts of Virginia.