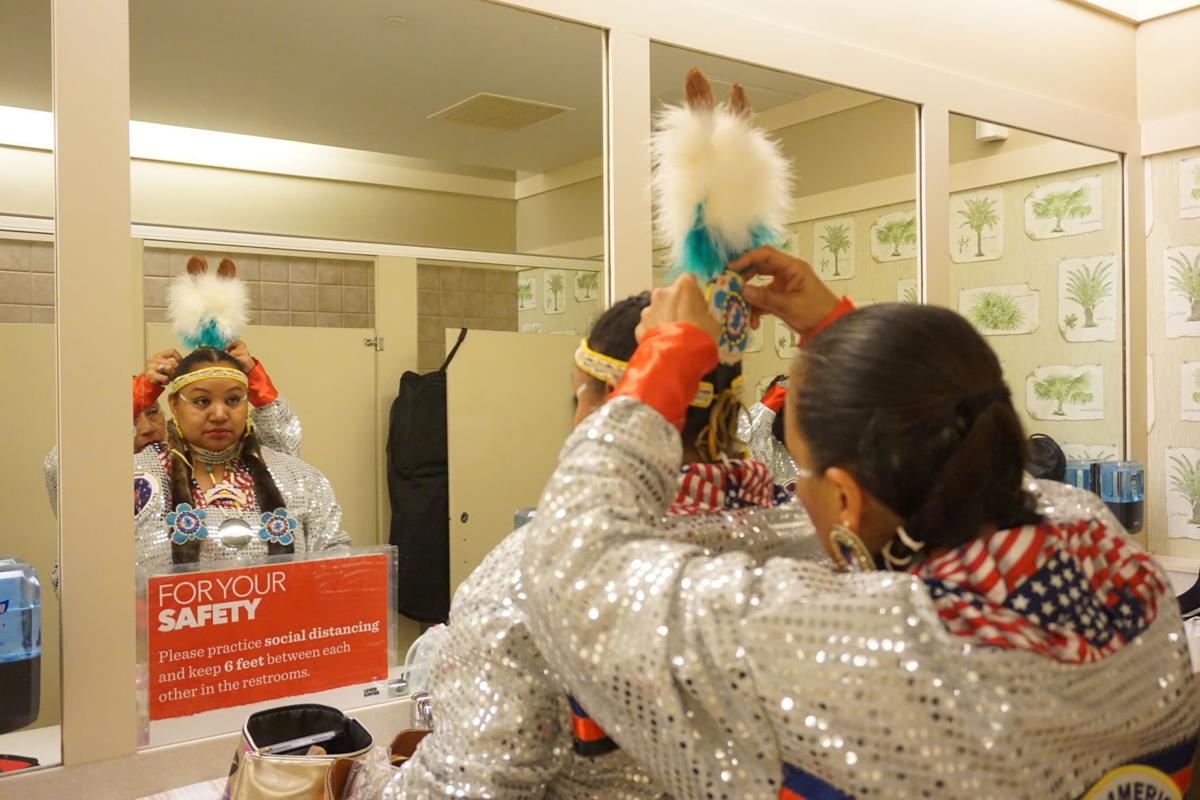 Mitchelene Big Man helps Renee Gaines put on her regalia for the Sovereignty Conference in Richmond. 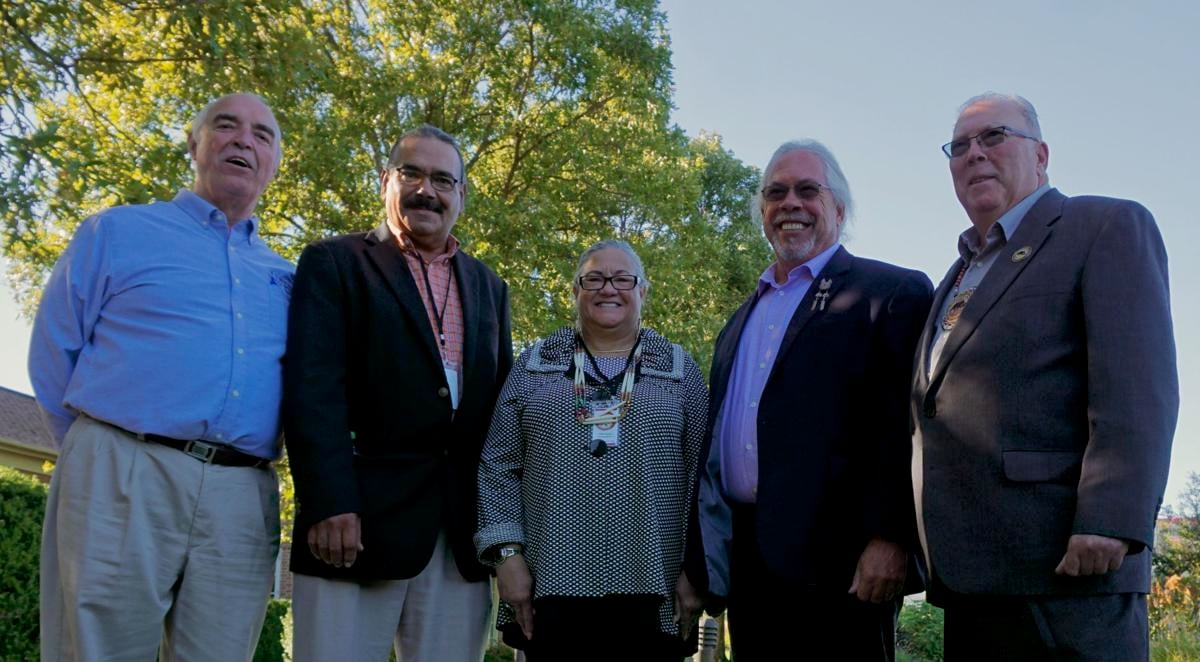 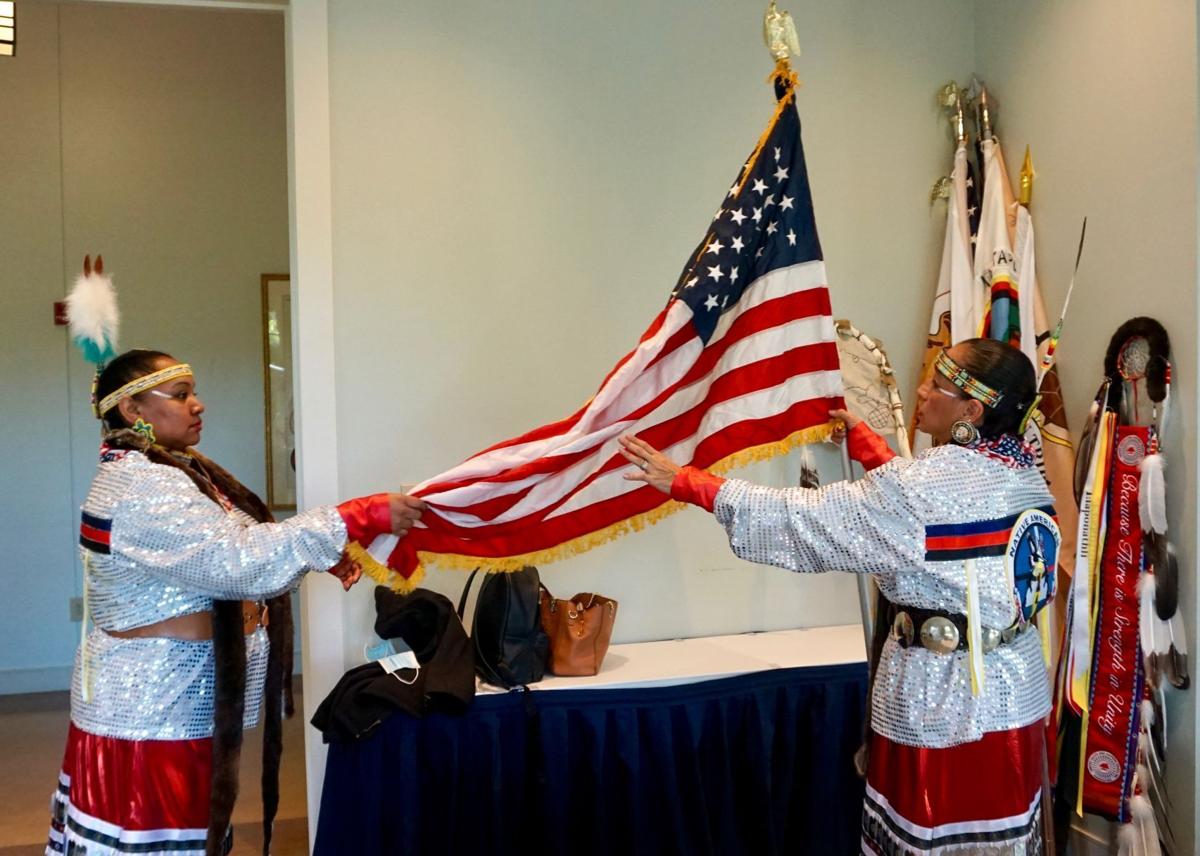 PAMELA A. D’ANGELO For The (Fredericksburg) Free Lance-Star

RICHMOND — At the end of September, in a small auditorium at Lewis Ginter Botanical Gardens, leaders of federally recognized tribal nations in Virginia held an inaugural Sovereignty Conference.

Their new status is akin to small nations that have a seat at the table at the United Nations. Attended by the public with an appearance by the governor, the historic event was relatively unnoticed.

The morning began with ceremony — drums, prayer and the jingling of dog tags sewn to the prayer dresses of the Native American Women Warriors who presented tribal flags during a procession of chiefs. Rappahannock Chief Anne Richardson hosted the daylong event at the gardens in Richmond.

“This is an important, historic event,” she began. “The federally recognized tribes of Virginia, feel that it is time for our sovereignty to be recognized by the state of Virginia as well as the United States government.”

There were scholars from Virginia Tech, University of Mary Washington and University of Richmond there to make presentations confirming centuries of broken treaties and erasure by Virginia and the federal government.

“Some tributary tribes elected to maintain relationships with the English, others apparently saw little advantage in continuing to participate in a treaty process and tributary system clearly designed to disenfranchise and dispossess them,” said Jason Sellers, associate professor of history at the University of Mary Washington.

“Control of the land and drastic reduction of Indian territory became a primary means through which the English tried to change Indian identity,” said Edward Ragan, the Rappahannock’s lead historian in documenting their history required for their federal recognition. He drove from Louisiana, where he works at Centenary College.

But it was Kitcki Carroll, director for the United South and Eastern Tribes, who drove home the importance of sovereignty in an moving, hourlong speech.

“But it requires us as a nation, as individuals, to take full ownership and accountability of our past. To be truthful and honest with that past and to understand how that past has played a role throughout our history and how it continues to play a role today.”

He ended by telling the group, “Strong tribal nations lead to a stronger America,” which was met with a standing ovation, applause and ululating.

That was a hard act to follow for Gov. Ralph Northam, who said federal recognition of seven of Virginia’s 11 tribes is “new territory” as government-to-government relationships are built.

“It is an understatement to say the United States and state governments have too often failed to live up to the terms of agreements with the tribes who were here first,” Northam said.

Chief Kenneth Branham, of the Monacan Indian Nation, summed up what most were saying after the program.

“Today, they went very deep into the subject and that was very refreshing to get the rest of the story,” he said.

Rappahannock Chief Richardson said she was pleased with the day and that some 300 people attended online, in addition to the 100 or so in the room.

“The opportunity to capture all of this information on the history and the sovereignty of the tribes and to be able to use it to educate our own people and others,” she said. “I think it will be something we will do every year from now on to maintain that relationship with the state.”

For the chiefs, the real work began right after the conference, when they rolled up their sleeves to meet privately on a draft sovereignty accord that will have to be vetted by each of the seven tribal nations. Their biggest worry is the state and all the agencies involved. From Virginia’s Department of Education to the Department of Environmental Quality, all will need to learn how to interpret state laws as they pertain to tribal sovereignty.

“I’m hoping that the state representatives that were here really learned a lot,” Pamunkey Chief Robert Gray said.” I have a feeling it will take longer to get through the state than it will to get through even the seven tribes.”

“We feel like we’re educating the state as we educate ourselves on the policy and procedures of the federal government and of just being federally recognized,” Adams said. “Most of the time we’re explaining things to the state when we’re really calling to ask them for advice, but that’s the way it has been.”

“I’m just ready to get into the nuts and bolts of an accord and how to work with the state to protect our sovereignty,” Chief Gray said.

Report: Returning Syrian refugees at risk of abuse from government

Mitchelene Big Man helps Renee Gaines put on her regalia for the Sovereignty Conference in Richmond.