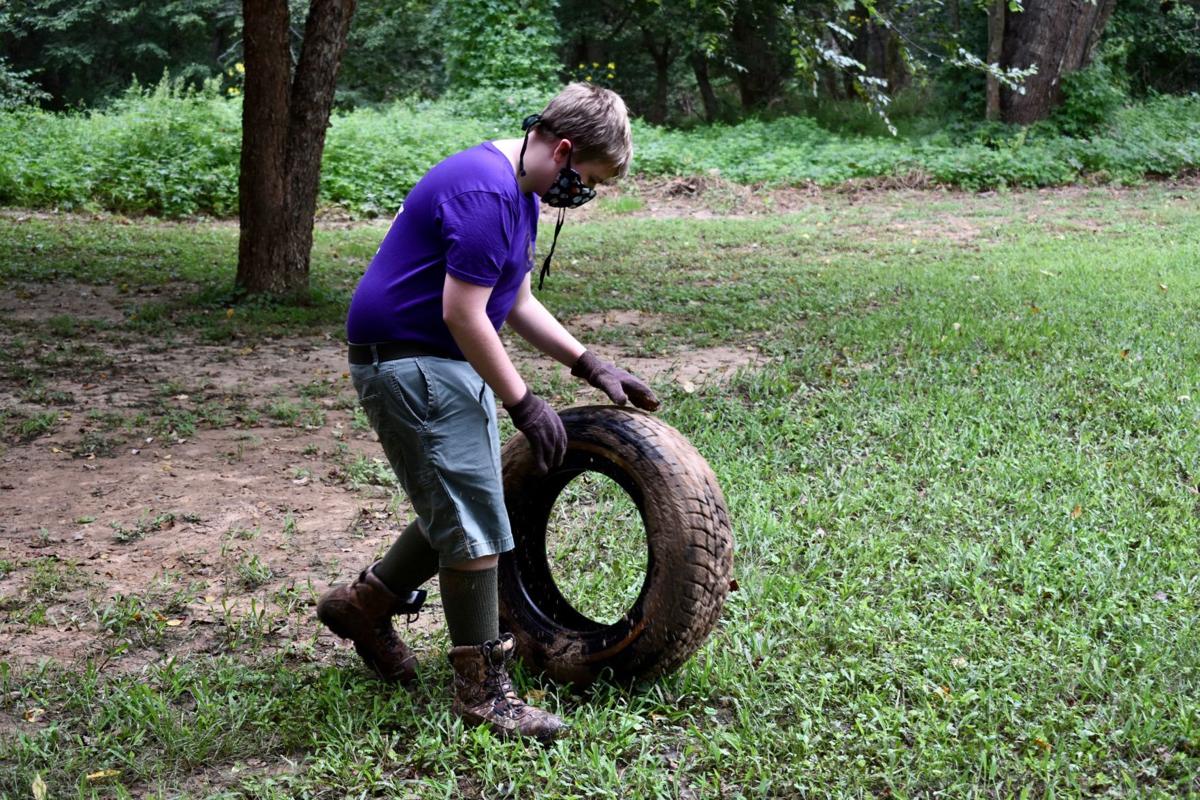 Jacob Kelly, a member of the Boy Scouts of America Troop 29, rolls an old tire out of Sandusky Park on Saturday, Sept. 12, 2020. 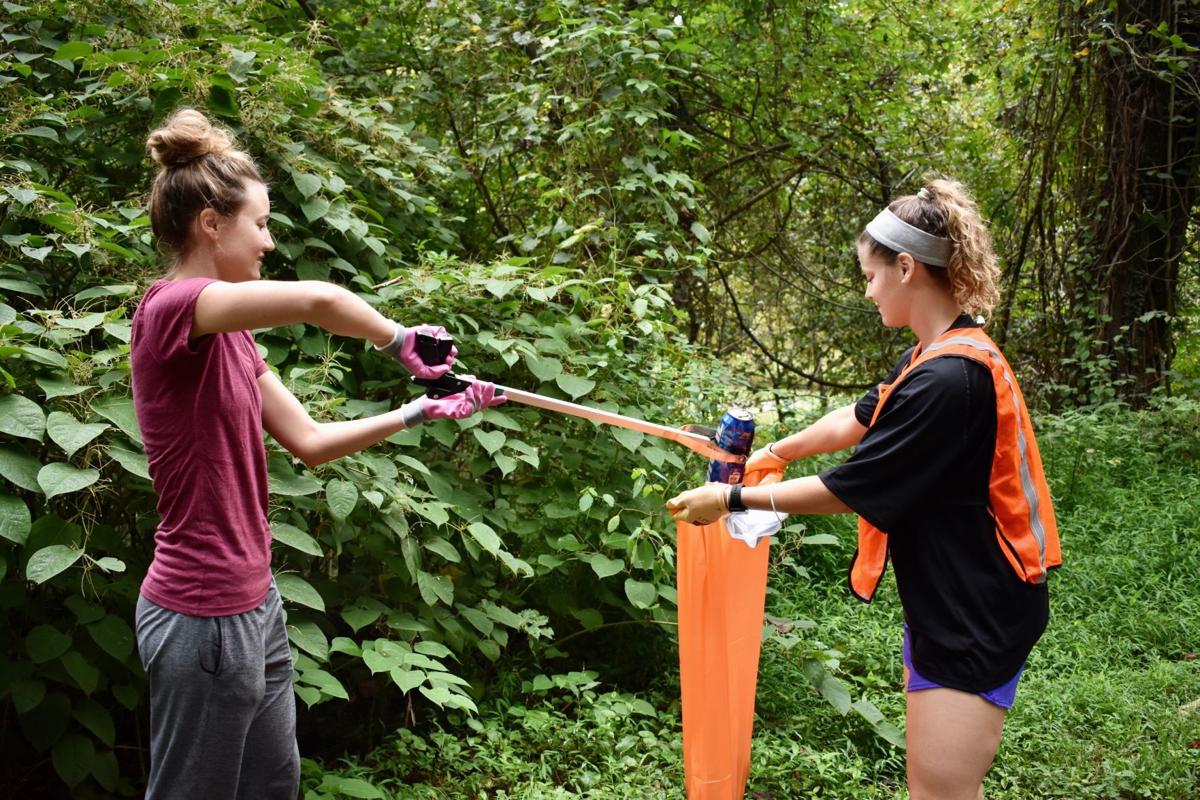 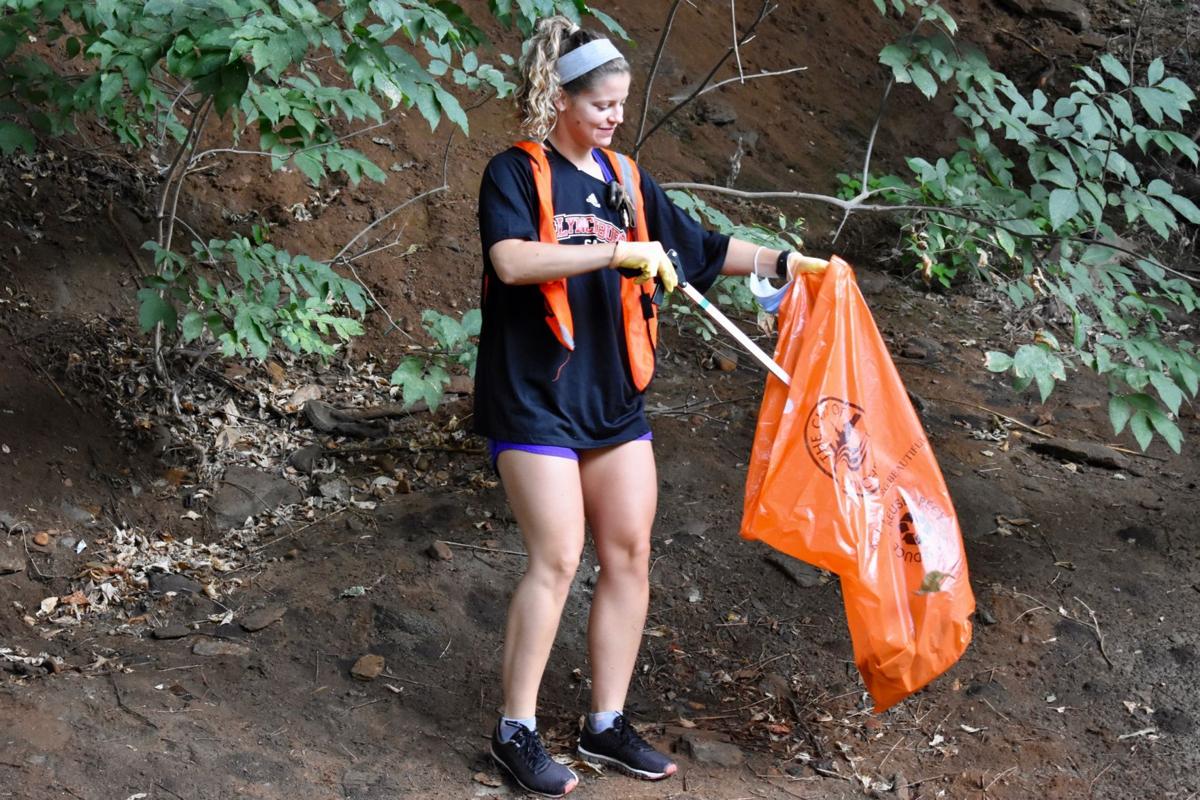 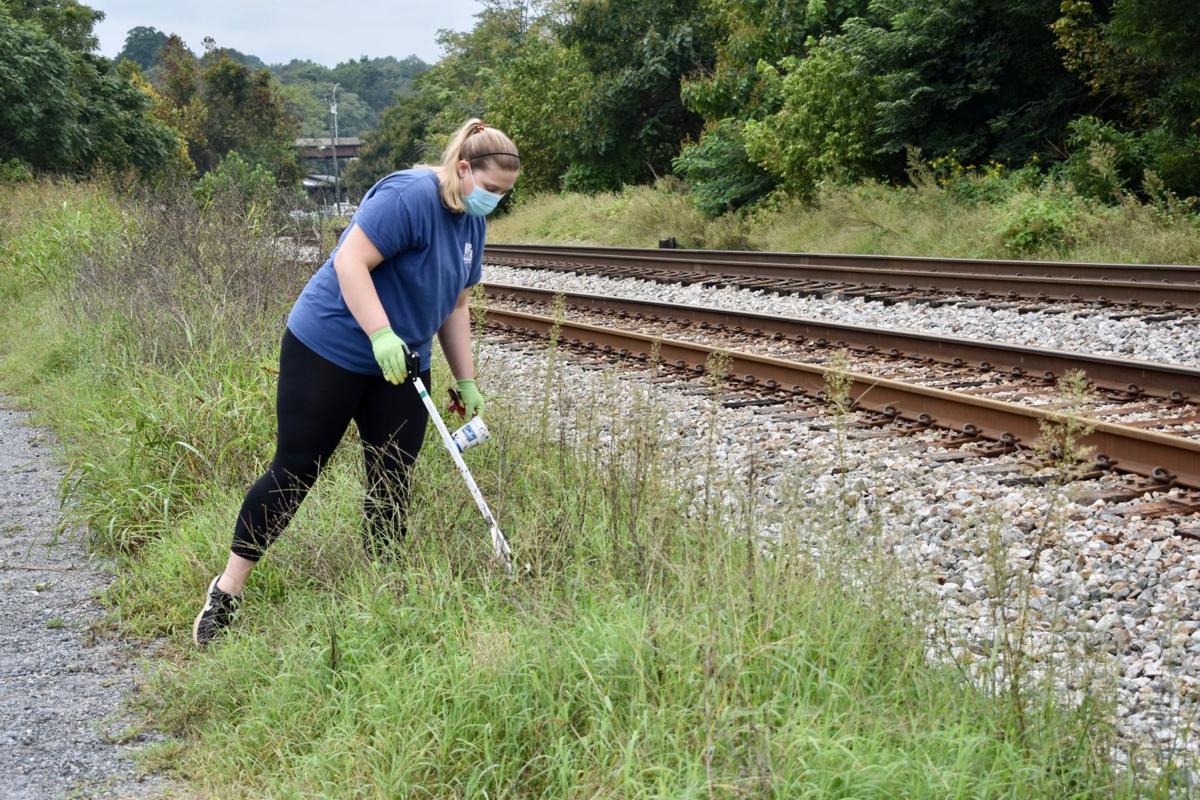 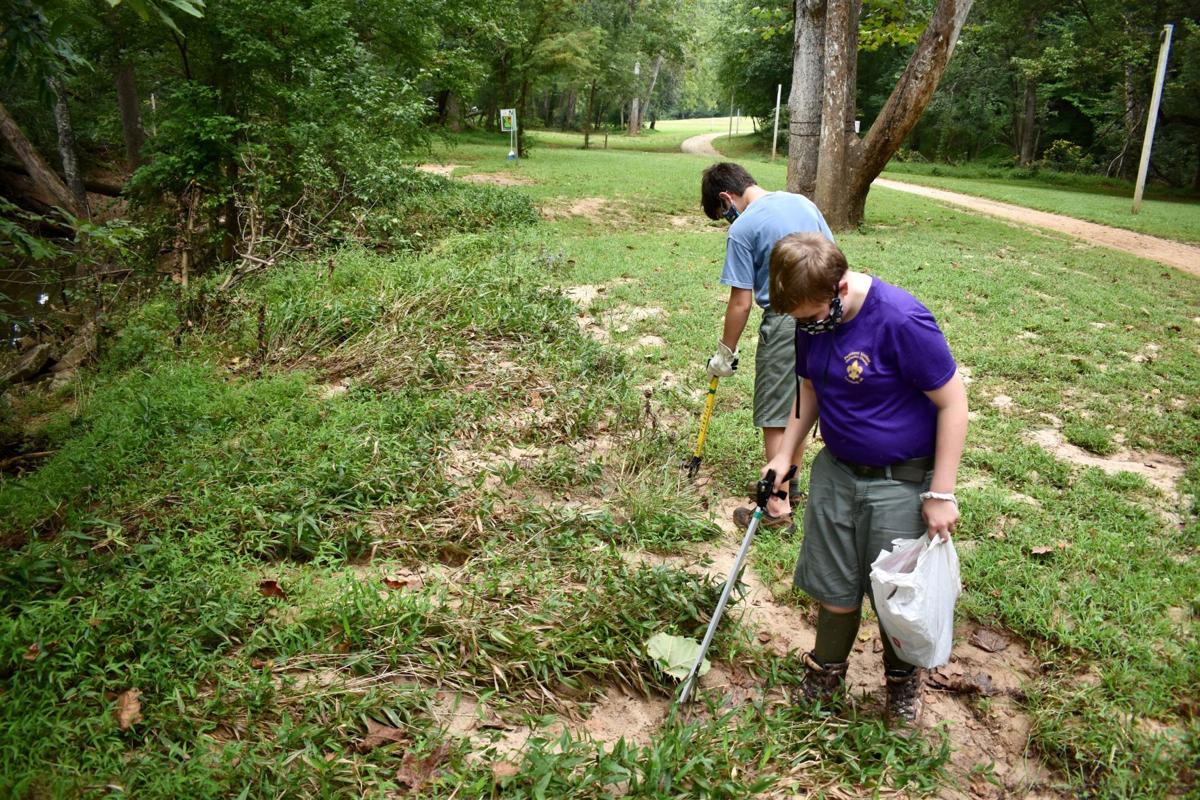 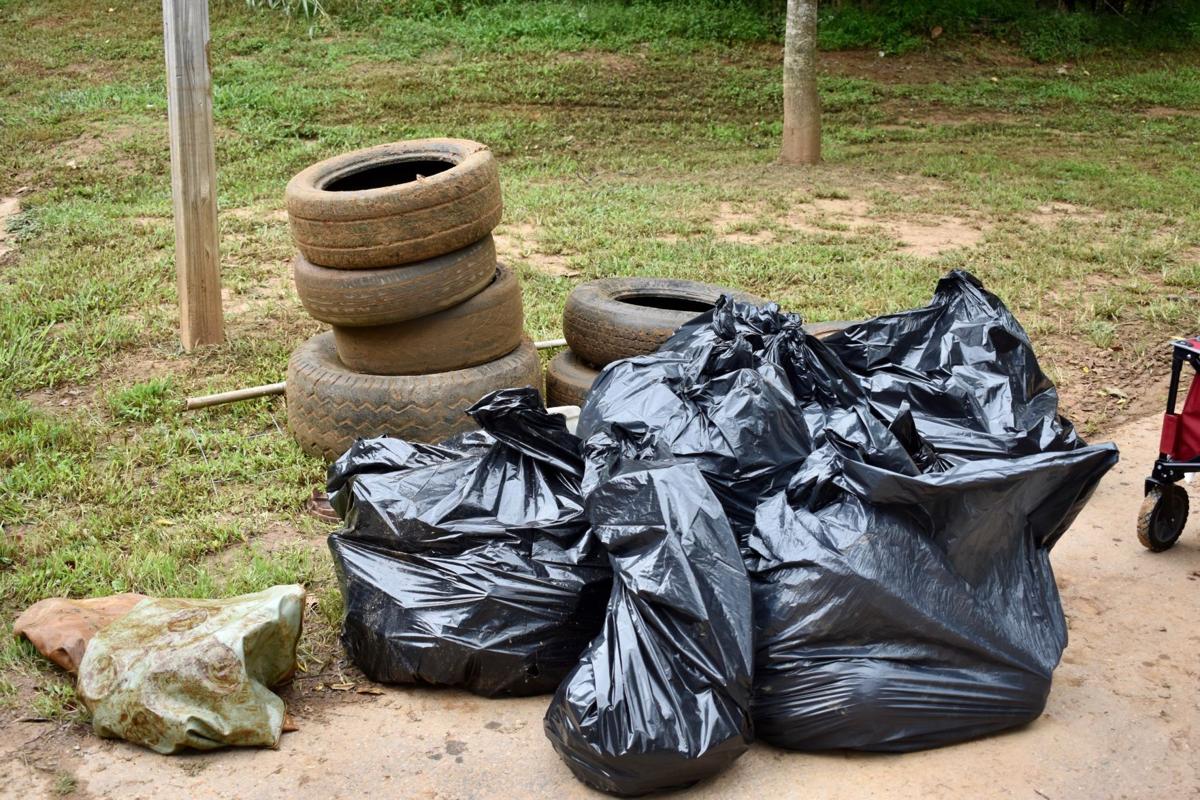 Trash collected by volunteers is piled up at the entrance of Sandusky Park in Lynchburg on Saturday, Sept. 12, 2020.

Members of the Lynchburg community spent Saturday morning picking up water bottles, lunchboxes, car tires and other trash along the city’s trails and in its parks.

“With this new season, we weren’t really sure how the community would want to interact with us with everything going on,” Haris said. “So we were really excited to see the amazing response and have people really want to partake in this opportunity to improve their community.”

Haris said Lynchburg Parks & Rec staff began noticing high volumes of trash along the Blackwater Creek, on trails and in parks, and hearing from community members who noticed the same thing. Litter along streets and trails and in parks travels into creeks, Haris said. From there, trash either collects in creeks and forms “trash dams” or makes its way into the James River, harming ecosystems there.

Lynchburg Parks & Rec has seen an increase in people using the city’s parks and trails this spring as many people looked for ways to get outside during the COVID-19 pandemic.

“On our trails, we’ve definitely seen an increase in usage,” Haris said. “Because we were able to keep them open during the pandemic, people have been enjoying the trails and parks.”

While smaller cleanup events have been held in the past, Haris said Saturday’s was the largest.

“We wanted to keep everyone safe,” Haris said.

Rombough and Abadie said they frequently visit the city’s trails and were eager to help clean them.

“Why not clean up a trail you’re always running on?” Rombough said. “The atmosphere of downtown Lynchburg is so nice, we just wanted to help keep it beautiful.”

“We use the trails quite a bit, so we figured we should give back,” Sloss said.

“The Boy Scouts are about community,” Mitchell said. “This is one of the ways we can help out community.”

For Sissy Parker, hospice care is not a job. It is a calling.

Jacob Kelly, a member of the Boy Scouts of America Troop 29, rolls an old tire out of Sandusky Park on Saturday, Sept. 12, 2020.

Trash collected by volunteers is piled up at the entrance of Sandusky Park in Lynchburg on Saturday, Sept. 12, 2020.