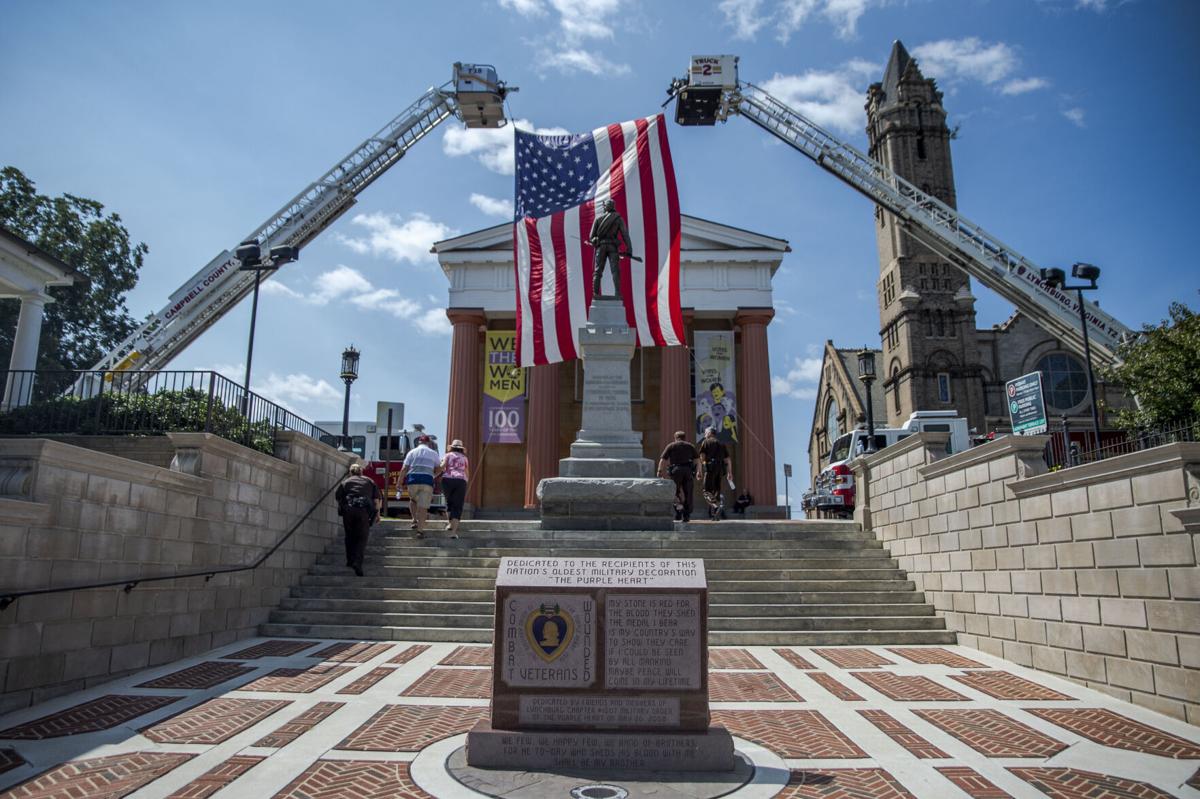 Held by two ladder trucks, an American flag hangs at the top of Monument Terrace during a 9/11 memorial ceremony Friday. 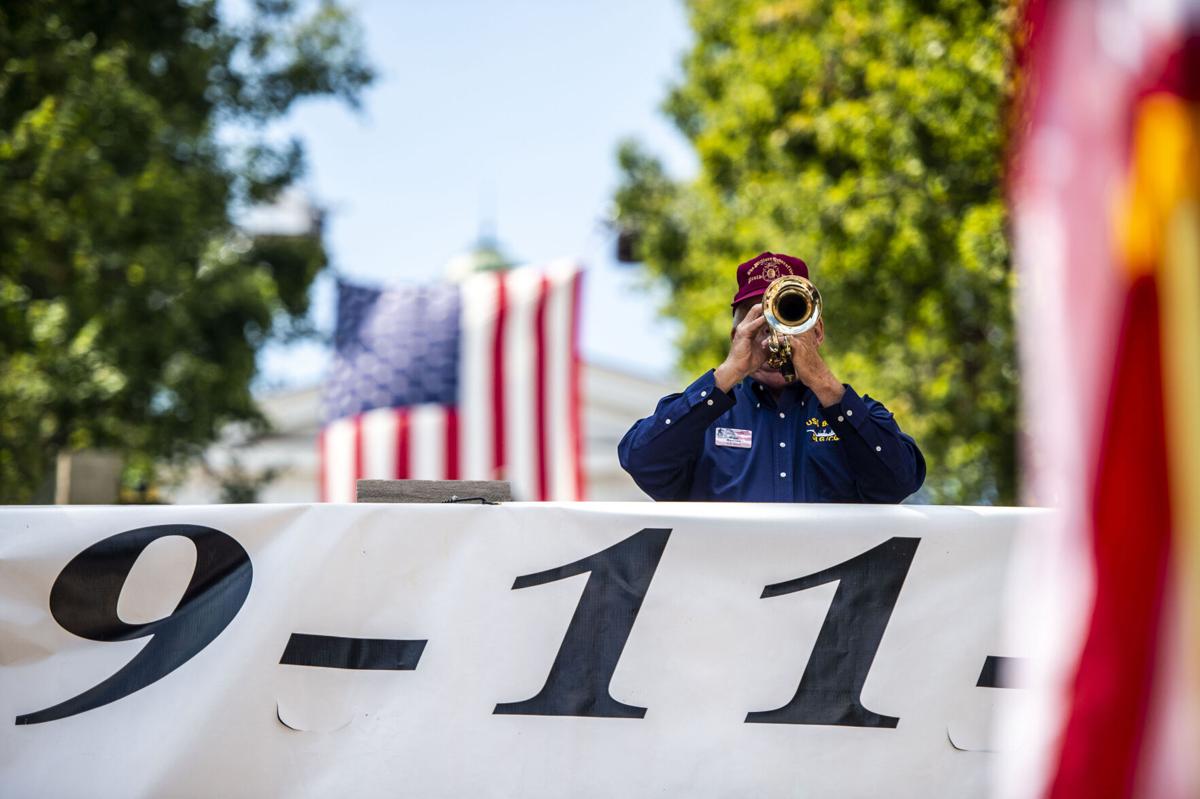 Mike Reeves performs Taps during a 9/11 memorial ceremony at Monument Terrace on Friday. 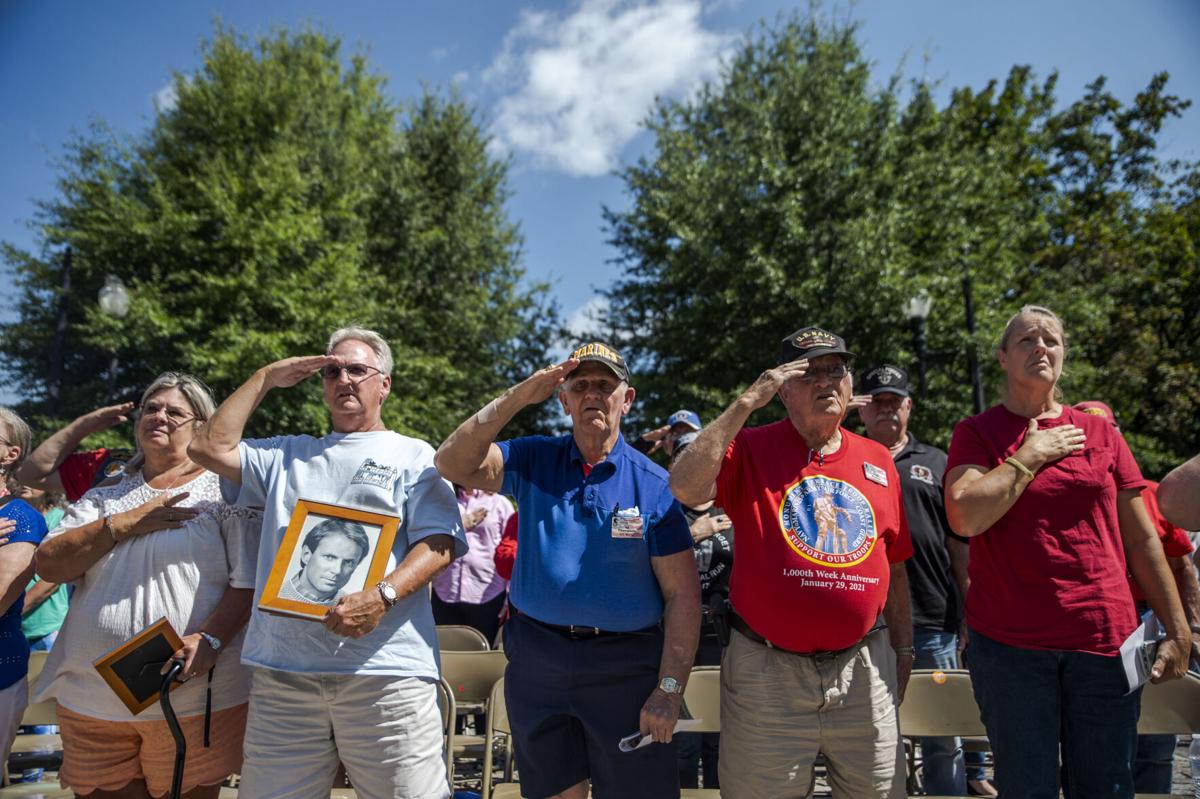 Attendees salute the American flag as it is presented by the Lynchburg Police Department Honor Guard during the 9/11 memorial ceremony. 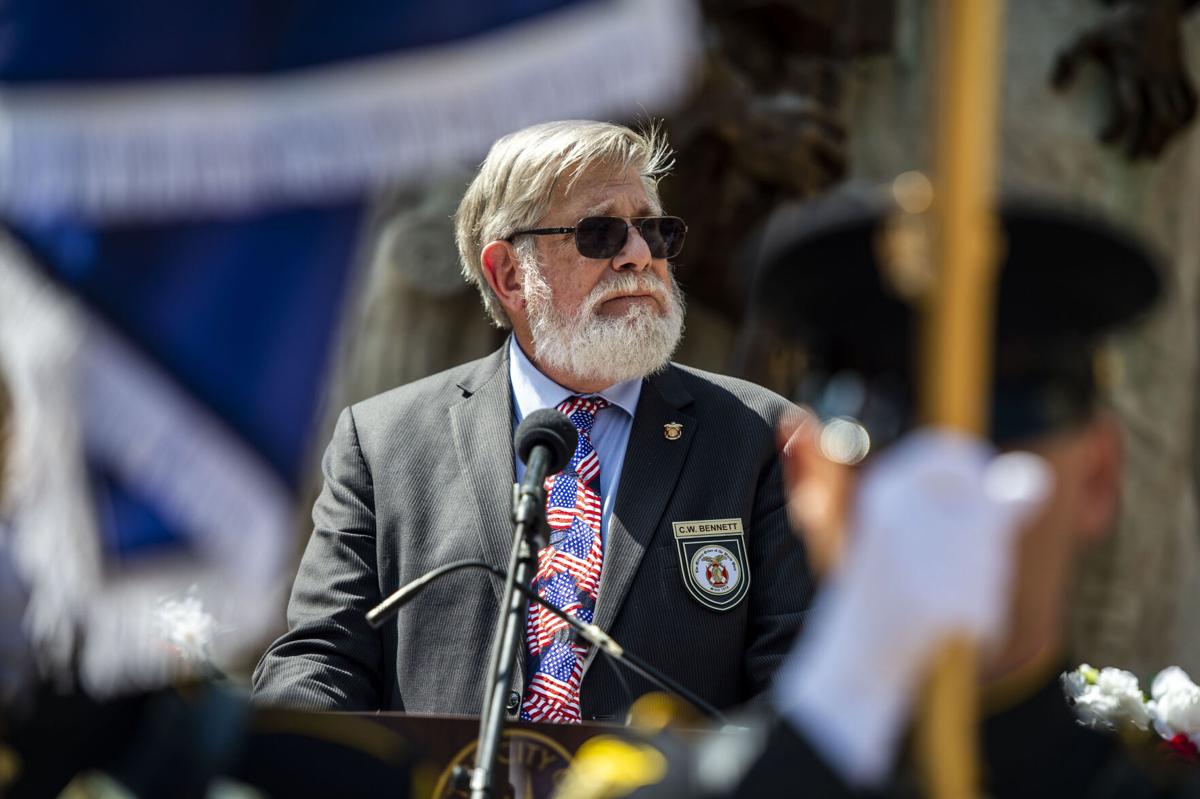 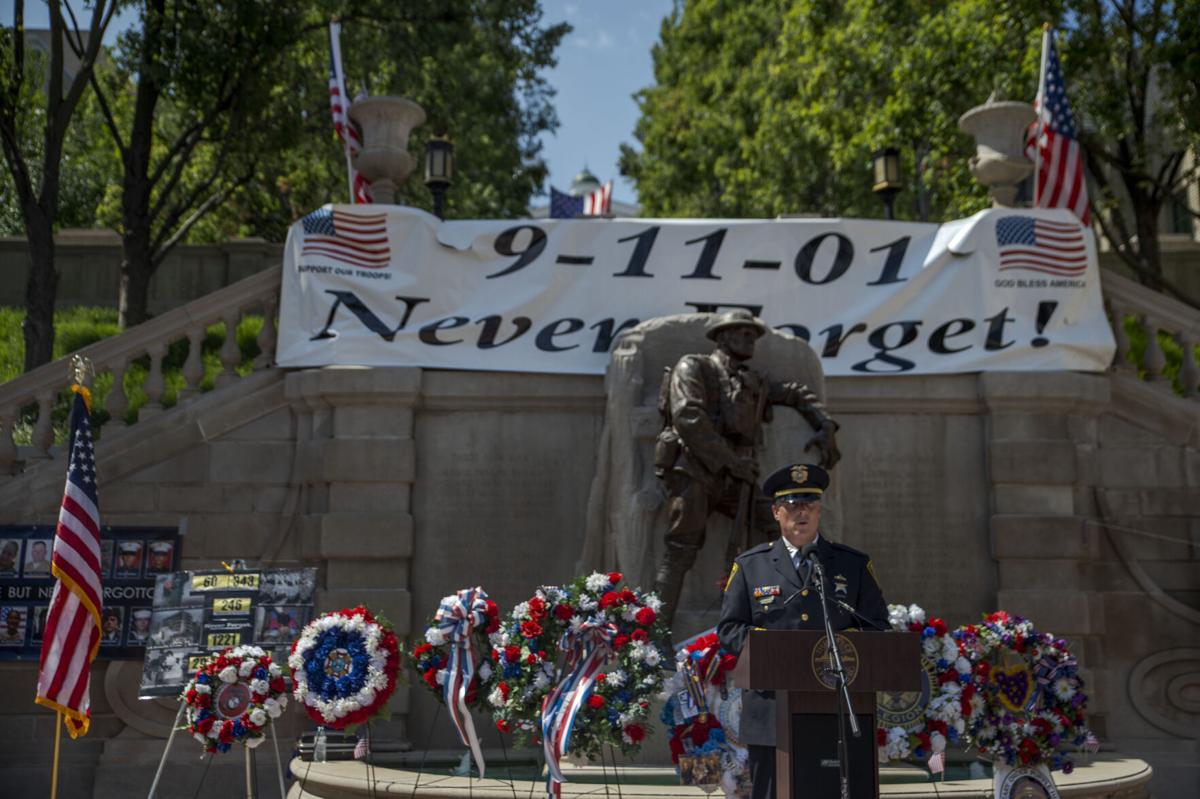 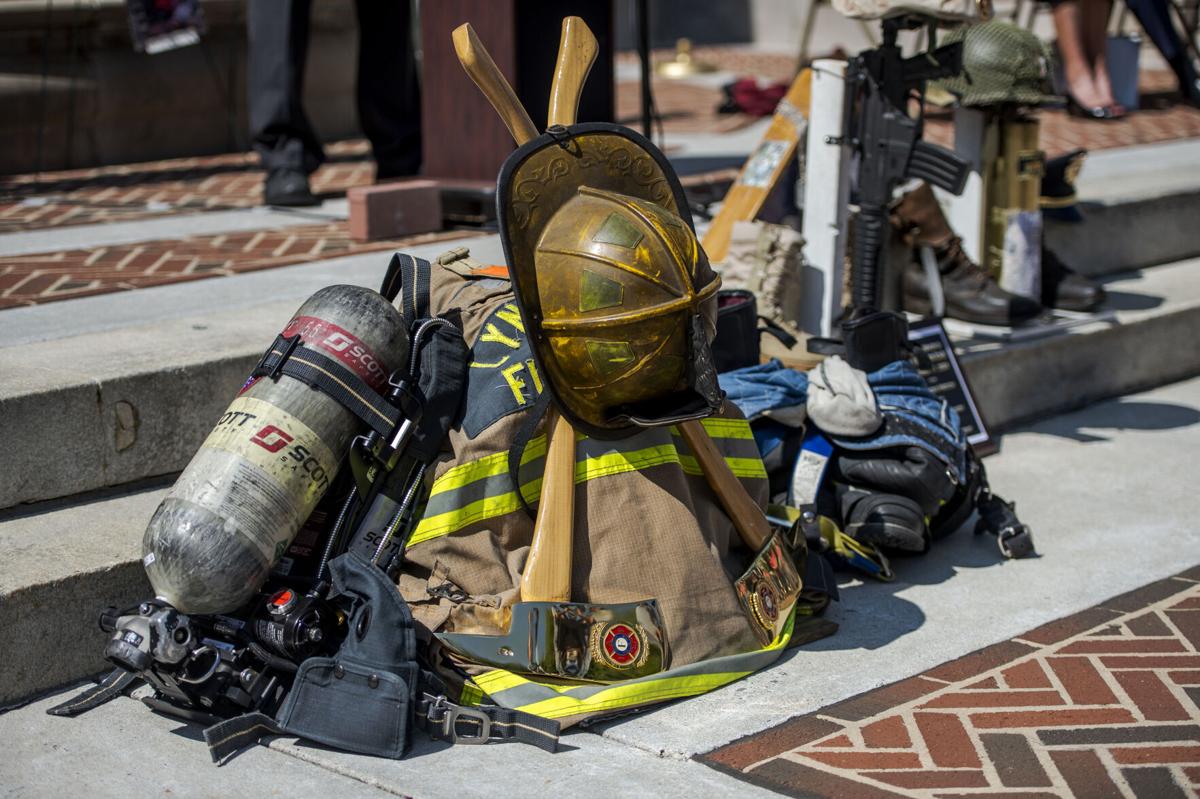 Mementoes of remembrance sit on the steps of Monument Terrace during a 9/11 memorial ceremony on Friday, Sept. 10, 2021. 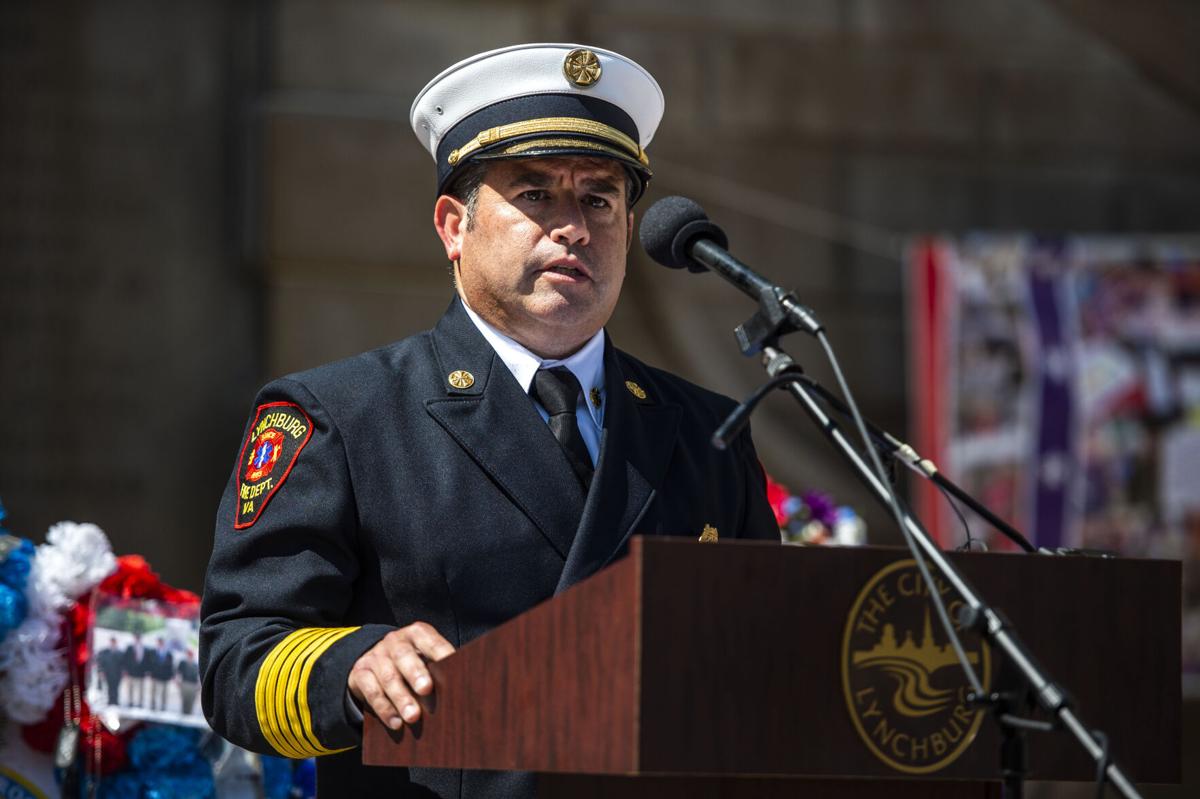 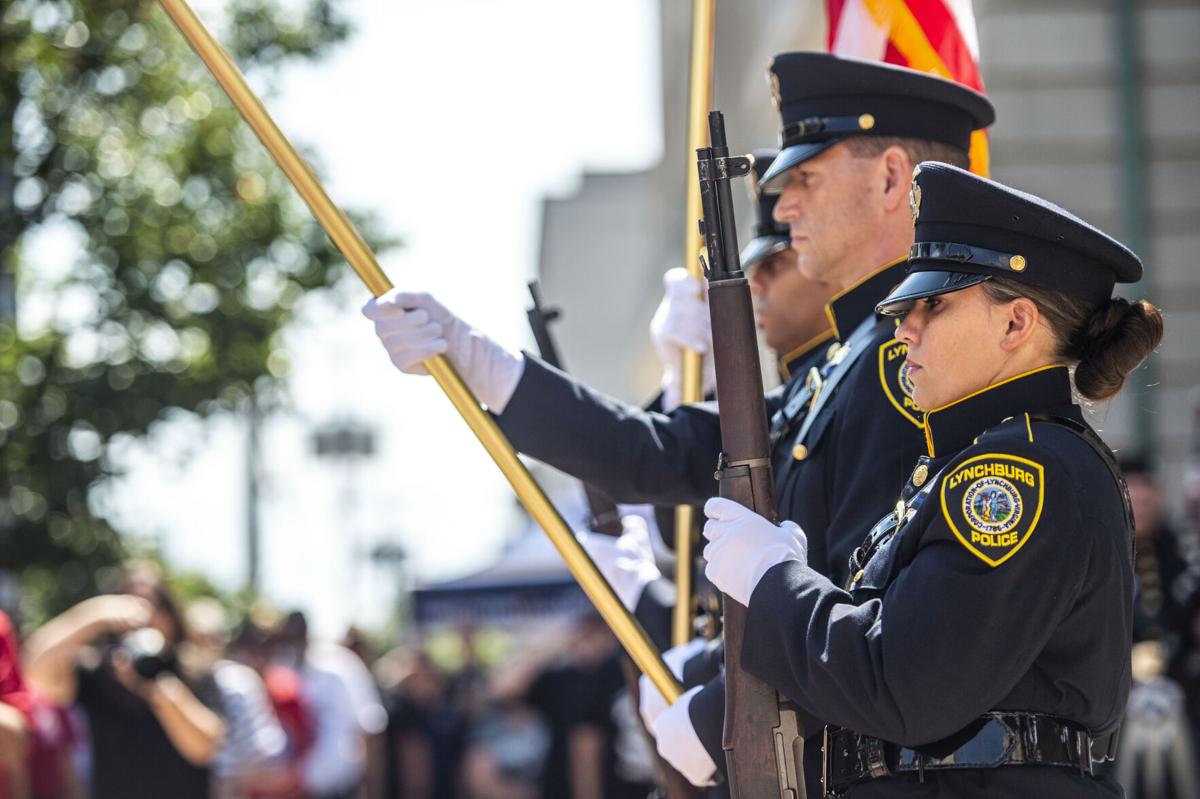 The Lynchburg Police Department Honor Guard presents the colors while the national anthem is sung by Keith Lee during a 9/11 memorial ceremony at Monument Terrace on Friday, Sept. 10, 2021.

Every Friday, for the last 1,032 weeks, veterans and supporters have held a weekly rally to support the troops — a tradition that began on Nov. 30, 2001 in the wake of the Sept. 11 terrorist attacks that dramatically altered the course of the nation and killed nearly 3,000 people.

Army veteran Brian Moore, who served three tours in Afghanistan and Iraq, spoke at Friday's ceremony. He was teaching high school history when the World Trade Center was attacked, and remembered telling his students that they would always remember where they were when it happened.

"Your lives have pivoted," Moore told them. "You have taken a turn that was forced upon you. Where you are going to end up is now going to be a different place.”

A member of the New Hampshire National Guard, in 2003 he was deployed to Iraq. After he returned from that tour, he felt compelled to return. He volunteered to go back and was deployed to Afghanistan as an embedded advisor.

On his third and final tour, another deployment to Iraq, he was the platoon sergeant of the youngest platoon in New Hampshire history to ever deploy, he said. The average age was 19.

He remembers his former student telling him that "only in America can you go to war with your history teacher."

Moore and many of the other speakers, including Lynchburg Mayor MaryJane Dolan, delivered speeches about the importance of unity, and of remembering a day that, for many, is impossible to forget. Regardless of differences, on 9/11, Dolan said "we were all American," which earned applause and murmurs of agreement from the audience.

"Our world changed forever," said Chuck Bennett, who was Lynchburg's police chief that day. It was a day "etched in memory," he said, with blue skies and fair weather, just like the sky overhead Friday, but one that would result in the single deadliest day for firefighters and police officers in the country's history.

Steve Bozeman, with the Lynchburg Area Veterans Council, pointed out a banner hung over the terrace steps behind him.

"The sign behind me says it all," Bozeman said, pointing back: "Never forget."

Phillip Torrence, a Vietnam veteran, was in the audience and said he tries to come out every Friday for the troop rally, but especially on 9/11.

If there was any message he took away, he said it was that it's time for America to return to a "sense of honor and duty," moving away from "party squabbles," and toward the message that everyone matters, regardless of differences.

Like many people, his connections to 9/11 were personal, extending even beyond his own military service. His daughter and her husband had worked in the area of the Pentagon just months before the attacks. If the attacks had happened even six months earlier, he said, "it could have been her."

"Life is not certain for anybody," he said.

Fay Andrist said it was a beautiful ceremony. Just beyond the podium, her late husband's name adorned a commemorative brick on Monument Terrace. He served in the army for 28 years and is buried in Arlington.

It's because of him that she comes to these memorials, she said — a way to remember him and honor the nation's past.

Photos: Monument Terrace ceremony held ahead of 20th anniversary of 9/11

Held by two ladder trucks, an American flag hangs at the top of Monument Terrace during a 9/11 memorial ceremony Friday.

Mike Reeves performs Taps during a 9/11 memorial ceremony at Monument Terrace on Friday.

Attendees salute the American flag as it is presented by the Lynchburg Police Department Honor Guard during the 9/11 memorial ceremony.

Mementoes of remembrance sit on the steps of Monument Terrace during a 9/11 memorial ceremony on Friday, Sept. 10, 2021.

The Lynchburg Police Department Honor Guard presents the colors while the national anthem is sung by Keith Lee during a 9/11 memorial ceremony at Monument Terrace on Friday, Sept. 10, 2021.