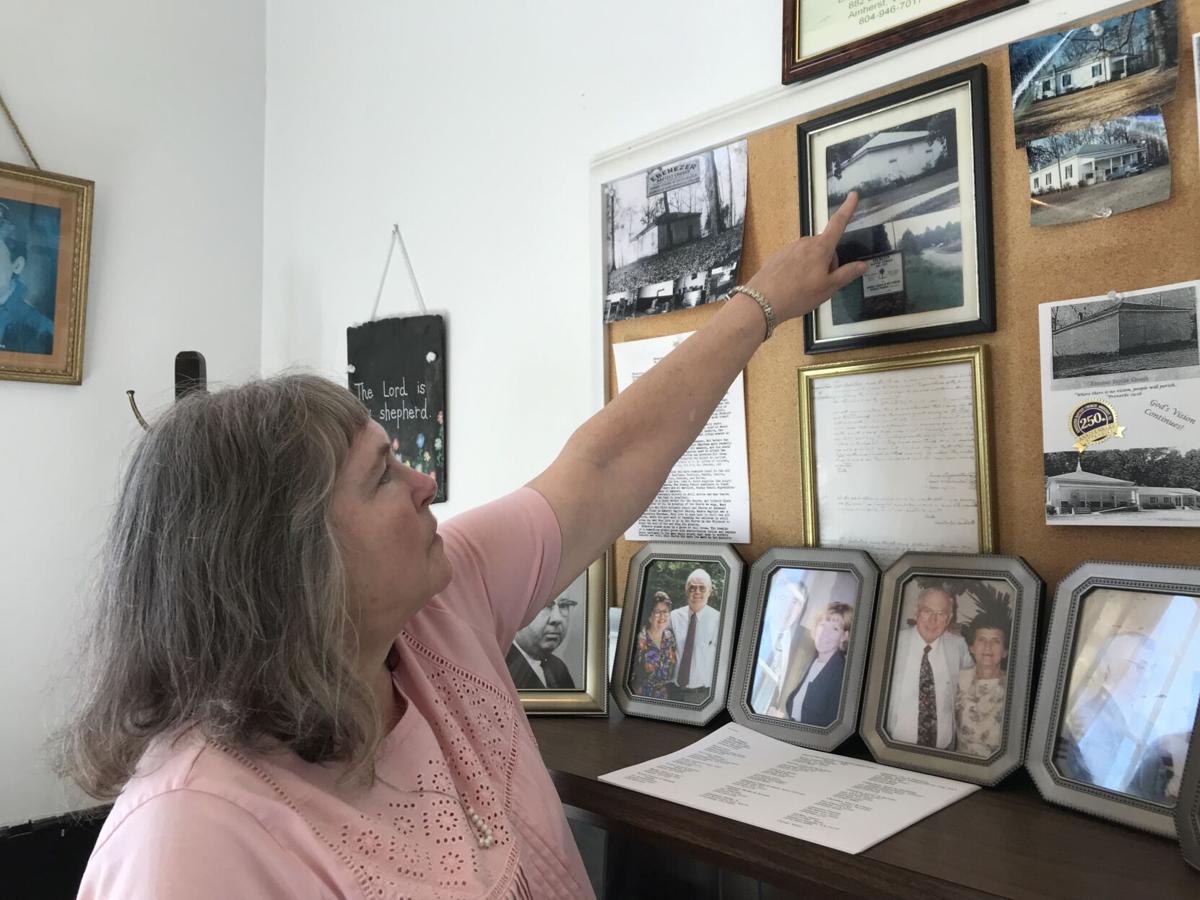 Sylvia Anne Martin points at a photograph of the original church building at the celebration for the 250th anniversary of Ebenezer Baptist Church in Amherst County on Sept. 4. 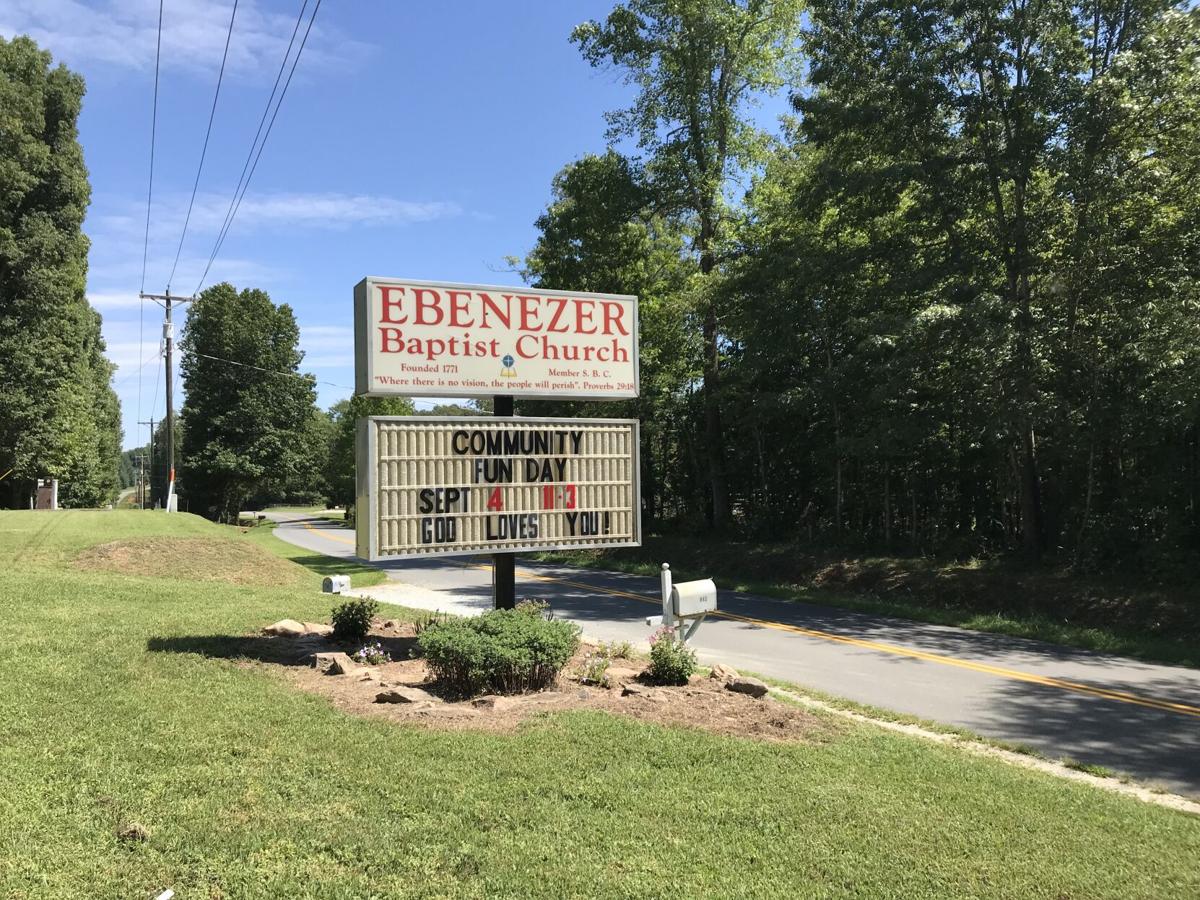 The church sign board at the celebration for the 250th anniversary of Ebenezer Baptist Church in Amherst County on Saturday, Sept. 4, 2021. 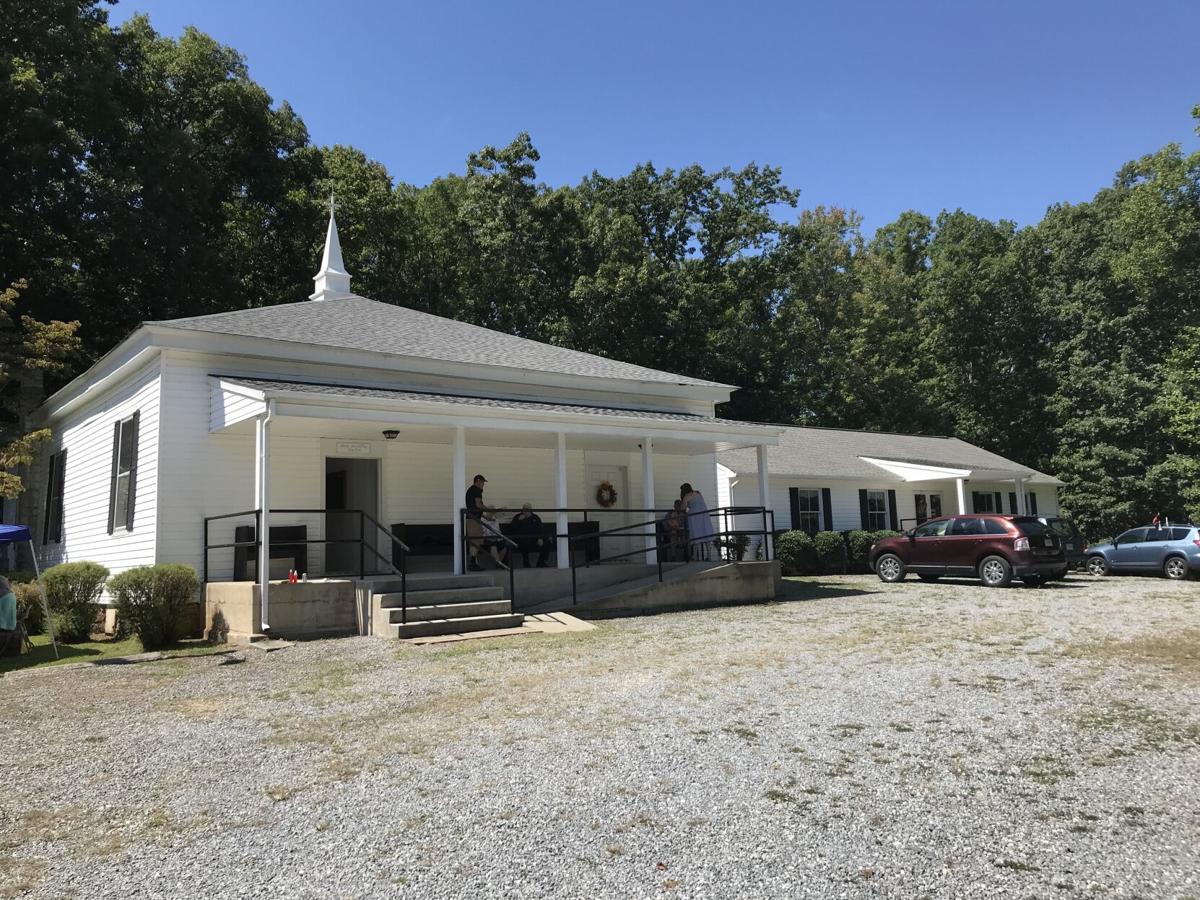 Ebenezer Baptist Church’s main building, containing the sanctuary, is believed date back to the 1860s. The new addition was added on in 2003, containing Sunday school classrooms, a kitchen, an office and other amenities the congregation long went without. 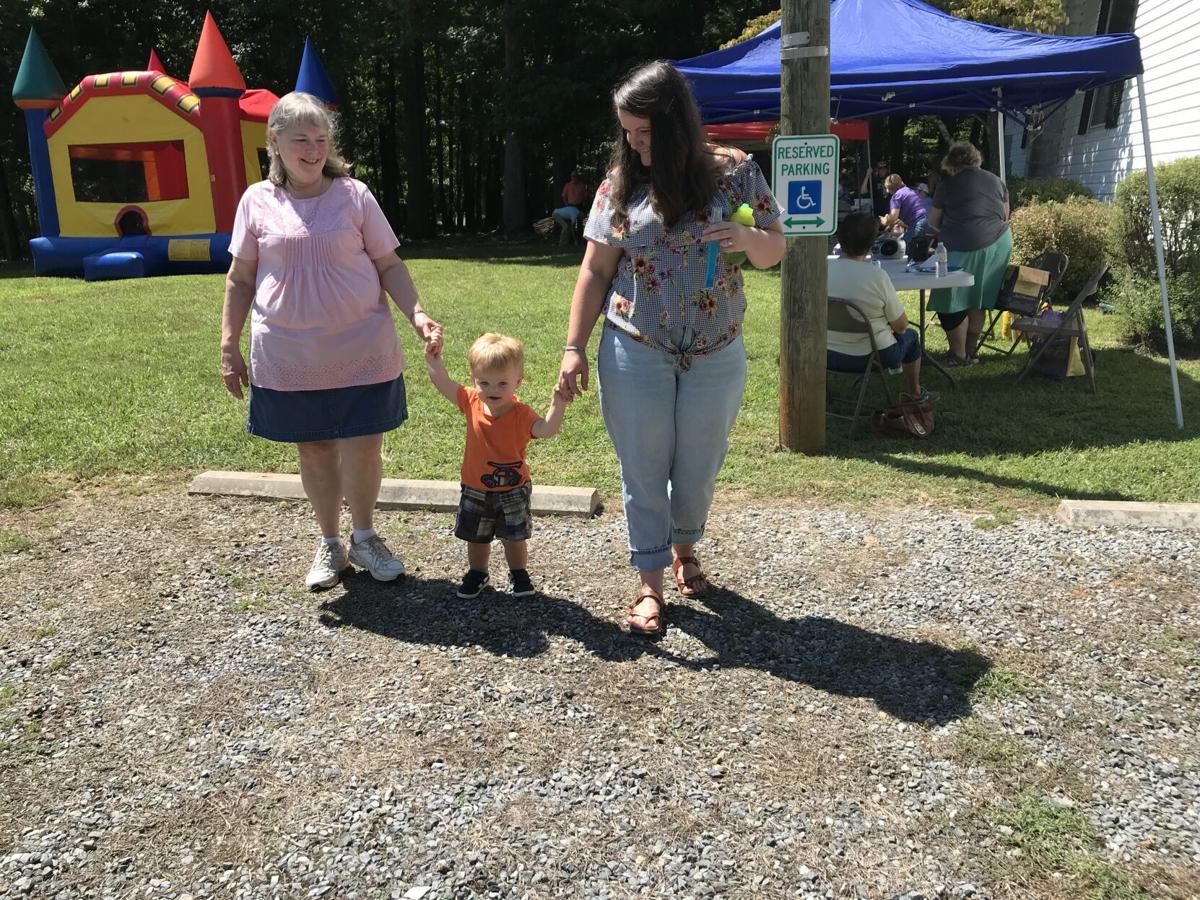 Sylvia Anne Martin (left) and her daughter-in-law Monica Martin hold 20-month-old Waylon Martin’s hands between them at the celebration for the 250th anniversary of Ebenezer Baptist Church in Amherst County on Sept. 4. 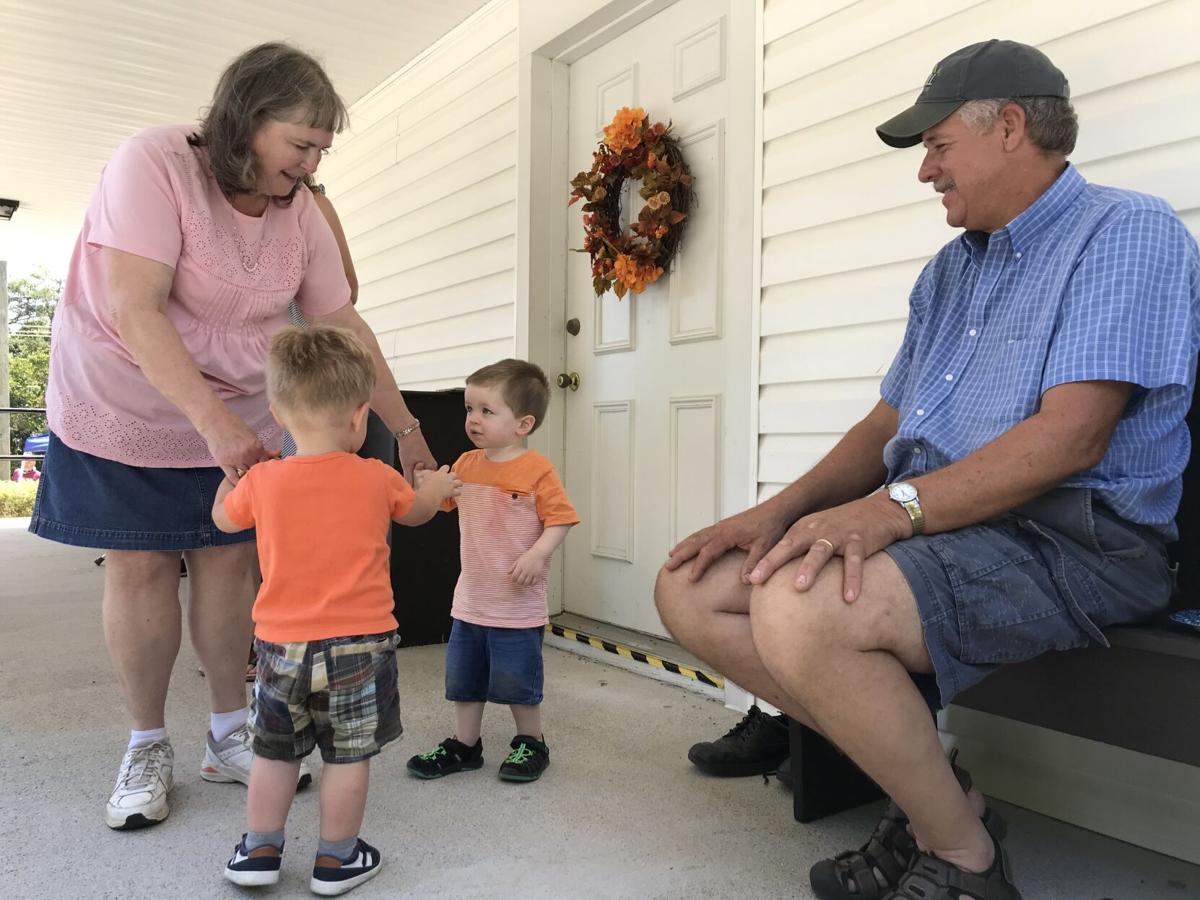 Sylvia Anne Martin (left) holds the hands of her grandsons, Waylon Martin and Noah Jennings, beside her husband and pastor, Dwayne Martin, at the celebration for the 250th anniversary of Ebenezer Baptist Church in Amherst County on Sept. 4.

One of the oldest churches in Amherst County, Ebenezer Baptist Church celebrated 250 years this weekend, recognizing a centuries-long legacy and breathing new life into its congregation.

First organized in 1771, the church — like most places that have stood for generations — has seen change, upheaval and a history that has built upon its original foundation.

Pastor Dwayne Martin said much of the early history of the church is lost.

The church was first organized in a log house with a fireplace that stood near the present site of the church. It’s believed the building burned down sometime around the Civil War, taking many of the old records with it. Martin said the current building, located on Ebenezer Road, was constructed in the 1860s on land given to the church by James Higginbotham, who owned a nearby farm.

Once a single-room wood building with a slate roof, heated by two potbelly stoves in the sanctuary, it’s since been subdivided into separate spaces, with an addition and basement built on in 2003. Still, the updated vinyl siding and shingles are like a second skin, only concealing the original bones beneath.

If you rip up the floorboards, you will find work of incredible craftmanship, he said — logs that are split and hand-hewn, with distinct Roman numeral “builder marks” that delineated where mortise and tenon joints were pre-cut to be fit prior to final assembly.

In the sanctuary, two gilt picture frames cover the flue holes that once fed the potbelly stoves, and a few of the original pews remain against the far wall, with bright red cushions covering the wooden benches.

Ebenezer has mothered several other Baptist churches in the area, and while some congregation members have generations at their backs, there is new blood, too, said Martin, people who have just moved to the area and were drawn to a small, country church.

Over and over, from Martin, his wife, Sylvia Anne, and other members of the congregation, “family” was a common reprise.

“We just fell in love with it,” said Anne Swartzwelder, who has been coming to Ebenezer for about 23 years. “It’s family, and they make you feel like you’re family. They want to know about you, and they care about you.”

She remembers helping to paint the baseboards when they built on a kitchen, rooms for Sunday School, and a nursery. She recalls Martin being there for every one of her surgeries, and a group of people who immediately worked to make her feel welcome in a new congregation.

Dwayne and Sylvia Anne Martin joined the congregation in 1992, and he has been the pastor for the last 21 years.

“I grew up two and a half miles from here, and never realized that I would be the minister at this church,” Martin said. When he joined the congregation, he was determined to keep his head down and just be part of the crowd. They were burned out from a prior church experience, and were ready to lay low.

Laughing, Sylvia Anne remembered him telling her, “we are going to sit in the back row, and we’re not going to do anything.”

But in a room of 20 people, said Martin, you couldn’t hide. He was pulled into the church family, and hasn’t left it since.

Back then, he was working for a printing company in Lynchburg, and hadn’t yet heard the call to ministry. That would come about five years later, and when he asked to fill in a couple of Sundays, if needed. He was immediately put behind the pulpit the next weekend.

“It was a pitiful sermon,” Martin said. “The first message I delivered, I couldn’t read my own writing. But you would have thought Billy Graham preached. They just encouraged me and they raised me here.”

He left his job at the printing company to move into ministry, and is currently a bi-vocational pastor, also working as a bus driver for Amherst County Public Schools.

Just thinking about 250 years makes Sylvia Anne tear up, and Martin playfully chided her, “don’t swell up and cry,” to which she said, “I can’t help it.”

“It’s just awesome to think that congregations have been meeting here in this area for that long, without folding up, because so many churches have,” she said. “It’s been here as a lighthouse for the community for this long.”

A brief history of Ebenezer Baptist, put together in 1973, reads: “Ebenezer stands alone in a grove of tall trees. The remains of a commodious picnic grove with weatherbeaten tables and benches bears testimony to the many happy crowds that come to worship beneath her roof” — and almost 50 years later, it still rings true.

In the lush green lawn, well-shaded by sprawling trees, members of the congregation and other visitors celebrated the church’s 250th year — exact anniversary date unknown — on Saturday, with a praise and worship celebration to follow Sunday morning.

Martin said he saw people who hadn’t been in attendance for a long time, and hoped this reminder of the close-knit church family would encourage some people to return to the congregation on a regular basis.

Phillip and Beverly Campbell sat under a tent with their daughter, Heather. Phillip has been coming to Ebenezer since 1966, when he was 5 years old; Beverly since 1980; and Heather since 1993. Though Phillip’s attendance has fallen off in recent years, Beverly comes every Sunday, and said a small, country church, with an intimate congregation, is what appeals to her.

“It’s all I’ve ever known,” Phillip Campbell said, a sentiment that Heather echoed.

In the coming years, Martin said the mission is to let “God’s vision continue,” to keep doing what they are doing, and “let the Lord continue to work here in this place.”

The church isn’t the building, he said, it’s the people. With 250 years behind them, he’s gearing up for 250 more.

Sylvia Anne Martin points at a photograph of the original church building at the celebration for the 250th anniversary of Ebenezer Baptist Church in Amherst County on Sept. 4.

The church sign board at the celebration for the 250th anniversary of Ebenezer Baptist Church in Amherst County on Saturday, Sept. 4, 2021.

Ebenezer Baptist Church’s main building, containing the sanctuary, is believed date back to the 1860s. The new addition was added on in 2003, containing Sunday school classrooms, a kitchen, an office and other amenities the congregation long went without.

Sylvia Anne Martin (left) and her daughter-in-law Monica Martin hold 20-month-old Waylon Martin’s hands between them at the celebration for the 250th anniversary of Ebenezer Baptist Church in Amherst County on Sept. 4.

Sylvia Anne Martin (left) holds the hands of her grandsons, Waylon Martin and Noah Jennings, beside her husband and pastor, Dwayne Martin, at the celebration for the 250th anniversary of Ebenezer Baptist Church in Amherst County on Sept. 4.