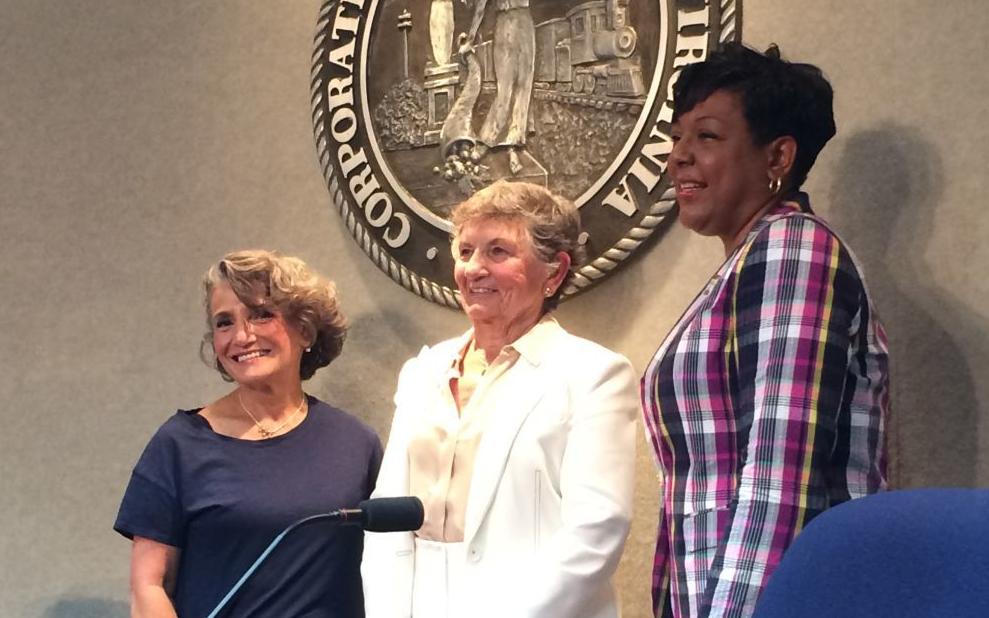 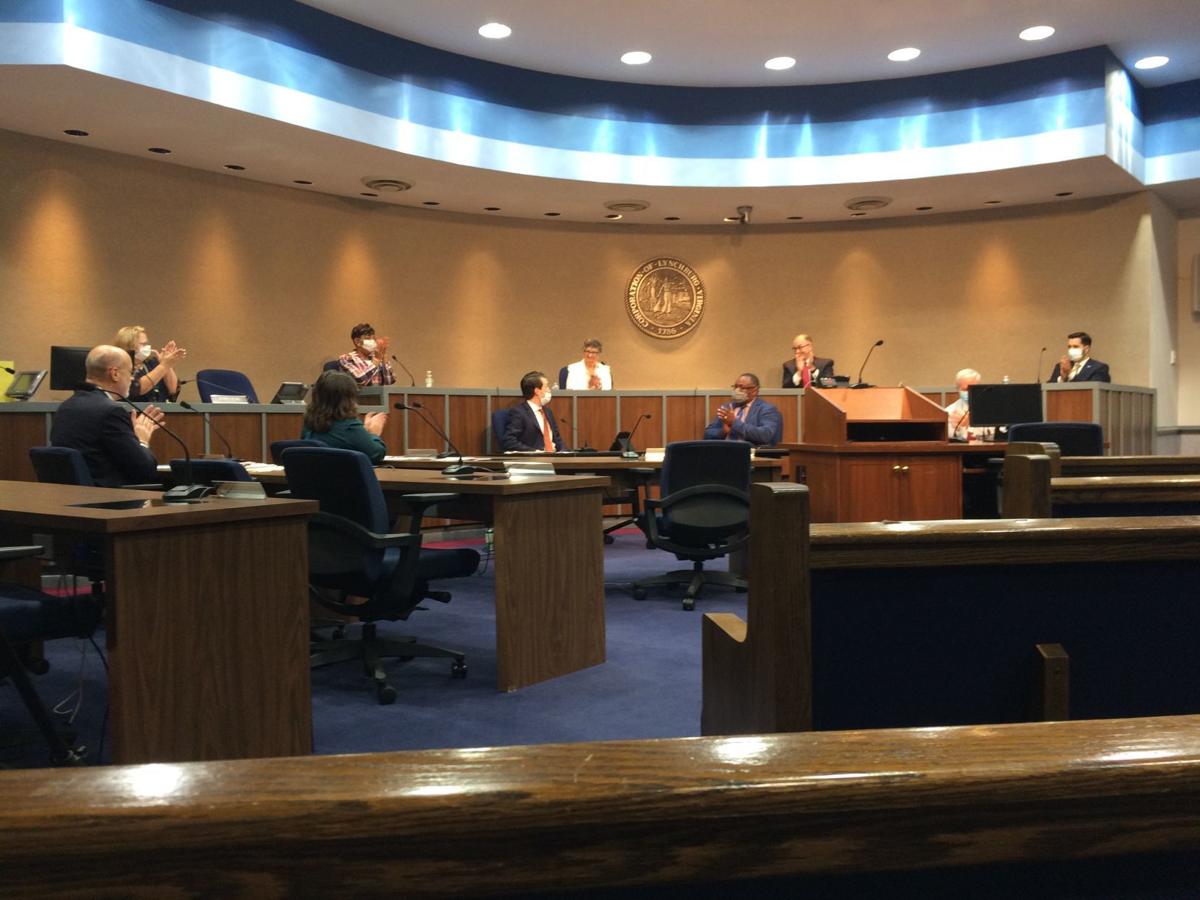 Dolan was nominated by outgoing Mayor Treney Tweedy, who has served in the position for the past two years, and was the first female African American mayor of the city.

She said it was an honor to nominate Dolan, who was elected to council in 2016 to represent Ward I. Dolan clinched the mayoral seat with 4 votes, with the other ballots being cast for Tweedy, and at-large councilman Randy Nelson.

“Beyond her quiet demeanor is a fierce giant that accomplishes the task before her, and is able to chart a successful course of direction and action for Lynchburg that will ensure our city and its citizens thrive,” Tweedy said of Dolan. “She will stand strong for her city.”

Dolan said she felt “humbled and honored” to serve the city in this capacity, and said council must prioritize moving forward through COVID-19, from a health and economic recovery standpoint, as well as supporting city schools through the transition.

She said council will “fast track” hiring a new city manager, as current City Manager Bonnie Svrcek, who was slated to retire in June, deferred her retirement until September.

Standing alongside Tweedy and former mayor Joan Foster — the first woman ever to fill the seat — Dolan said they are a part of a “girls’ club,” and that it was good to be in the company of two very strong women.

In a 5-2 vote, at-large councilman Beau Wright was selected as the next vice mayor and said this is going to be an important two years for Lynchburg.

Elected to city council in 2018, Wright, 31, was the youngest member until newly elected Ward IV Councilman Chris Faraldi, 25, was sworn into office Tuesday.

“I think this was inevitable; there was always going to be a millennial who ultimately took on these challenges,” Wright said. “It’s important that we have younger people in positions of leadership ... I hope this sends a message that young people need to be included in the decisions that are going to affect our community for the next several decades.”

Ward II Councilman Sterling Wilder nominated Wright and said his experience in finance and work in federal government, as well as his dedication for the community, made him a good fit for the role.

The mayor and vice mayor positions are selected by council consensus following nominations from council members. They are ceremonial posts and do not have formal authority outside of council.

Tweedy, who served in a historic capacity for the city, said she has enjoyed her time as mayor, and cited the accomplishments of council over the last two years, including infrastructural steps forward, and supporting the city’s economic development.

“I will continue to serve as an at-large member for the next two years, being bold and outspoken, championing causes and tasks that benefit our citizens,” Tweedy said. “I will continue to interrupt and upset the apple cart of the long-time Lynchburg political establishment by offering my knowledge and abilities to help support, recruit and train the next generation of community leaders.”

Also at its Tuesday morning meeting, council voted to readopt its rules of procedure with an amendment stating 12 hours of advance notice will no longer be required for a special meeting of council — an issue that arose earlier in the month as special meetings were held to address concerns surrounding Black Lives Matter protests in the city, as well as on June 18 to make Juneteenth a paid city holiday.

Before the amendment, the city council’s rules of procedure required that at least 12 hours of notice must be given prior to a special meeting. Virginia state code and the Virginia Freedom of Information Act permit meetings as deemed necessary, as long as notice is “reasonable under the circumstances.”

City Attorney Walter Erwin said during the past few months, in an effort to respond to issues resulting from the COVID-19 pandemic and recent incidents of social unrest, it has been necessary for council to call several special meetings, and has not always been practical to give 12 hours of advance notice.

“Council’s rules of procedure are not intended to make it more difficult for council to carry out its duties,” Erwin said.

He said the 12-hour rule was first put into the city code in 1931, and at that time there were no other means to communicate aside from written notice. The state also did not have the Freedom of Information Act to regulate the special meetings as it does now.

Helgeson was strongly opposed to the amendment, and said in the around 15 years since the rules of procedure was adopted, it was never before a problem, and the recent occurrences of special meetings could have been done with a minimum of 12-hour notice. He said that making “snap decisions” leads to poor choices being made, particularly without first hearing from residents.

“Changing these procedures, it begs lots of questions,” Helgeson said. “We’re a deliberative body, we are not one that just governs and rules with an iron fist.”

Other council members, like Wilder, pushed back against these concerns. In a phrase that has become a calling card of the last several months, Wilder said these are “unprecedented times.”

Before the rules of procedure were readopted and amended, Nelson successfully amended the motion to require that the first action of any special meeting of city council be to pass a vote confirming that it is an emergency circumstance.

Council will next meet July 14.

As school divisions locally and across the state shift to remote learning to begin the upcoming school year, Bedford County Public Schools is …

Lynchburg City Schools students will return to school 100% remotely Aug. 24, and will not transition to in-person learning until at least afte…

Outbreaks lead to increased cases, deaths in and around Lynchburg

Coronavirus outbreaks in nursing homes, churches and other settings continue to spread COVID-19 to residents in Central Virginia.

RUSTBURG — Wireless broadband is about to spread into more of Campbell County. In four to six months, unserved areas of the county — such as t…

Lynchburg’s first skyscraper still rises from the corner of 9th and Main streets, though its title as the city’s tallest building long since has been usurped.