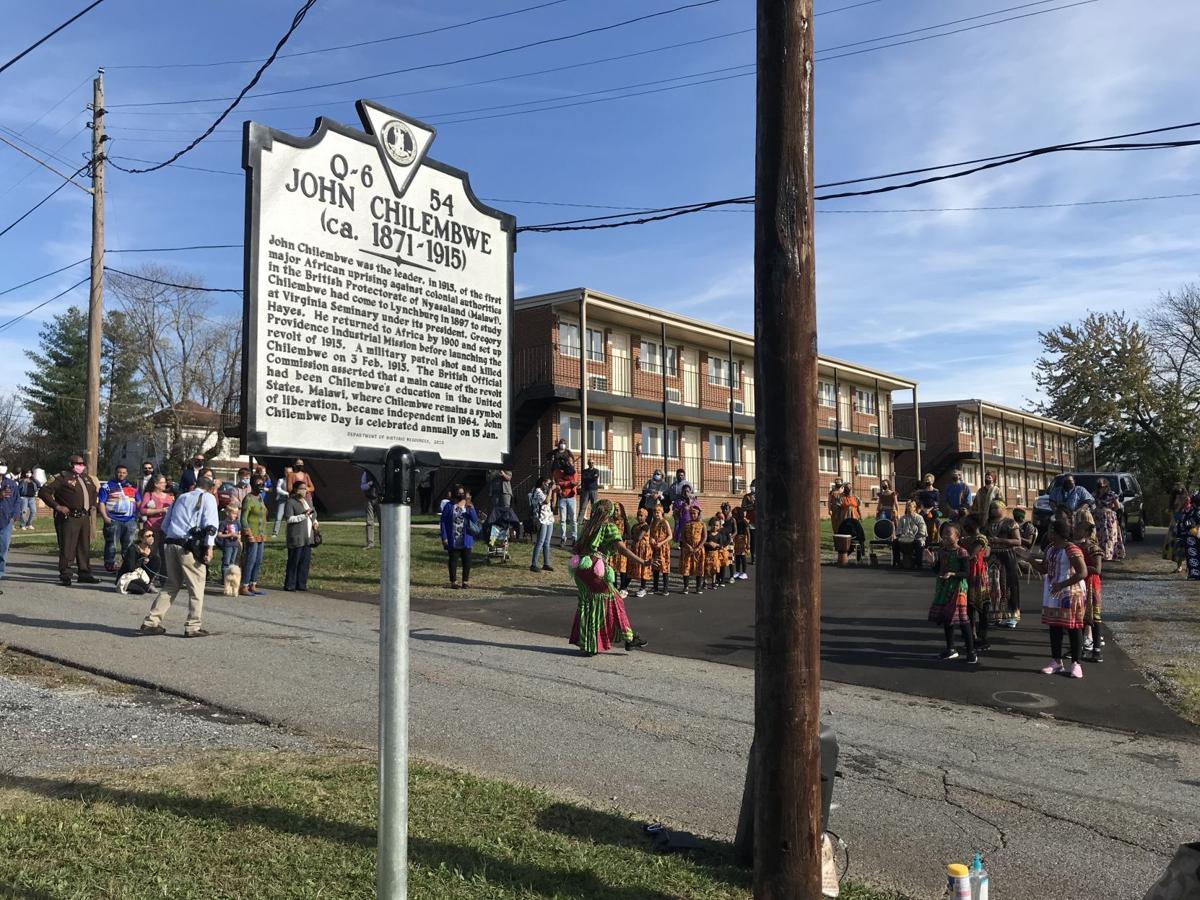 The John Chilembwe historical marker is pictured on the Virginia University of Lynchburg campus Saturday afternoon. 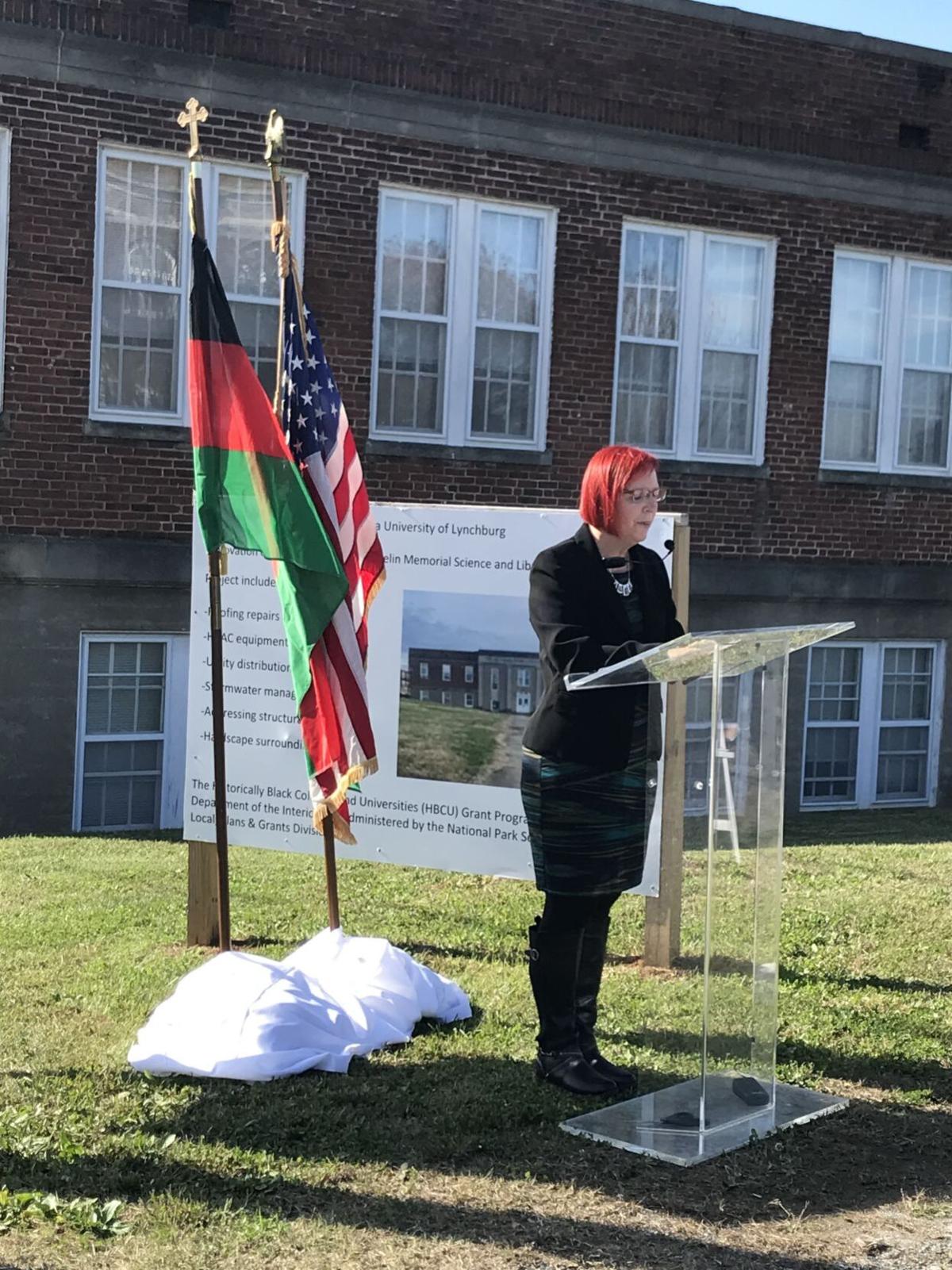 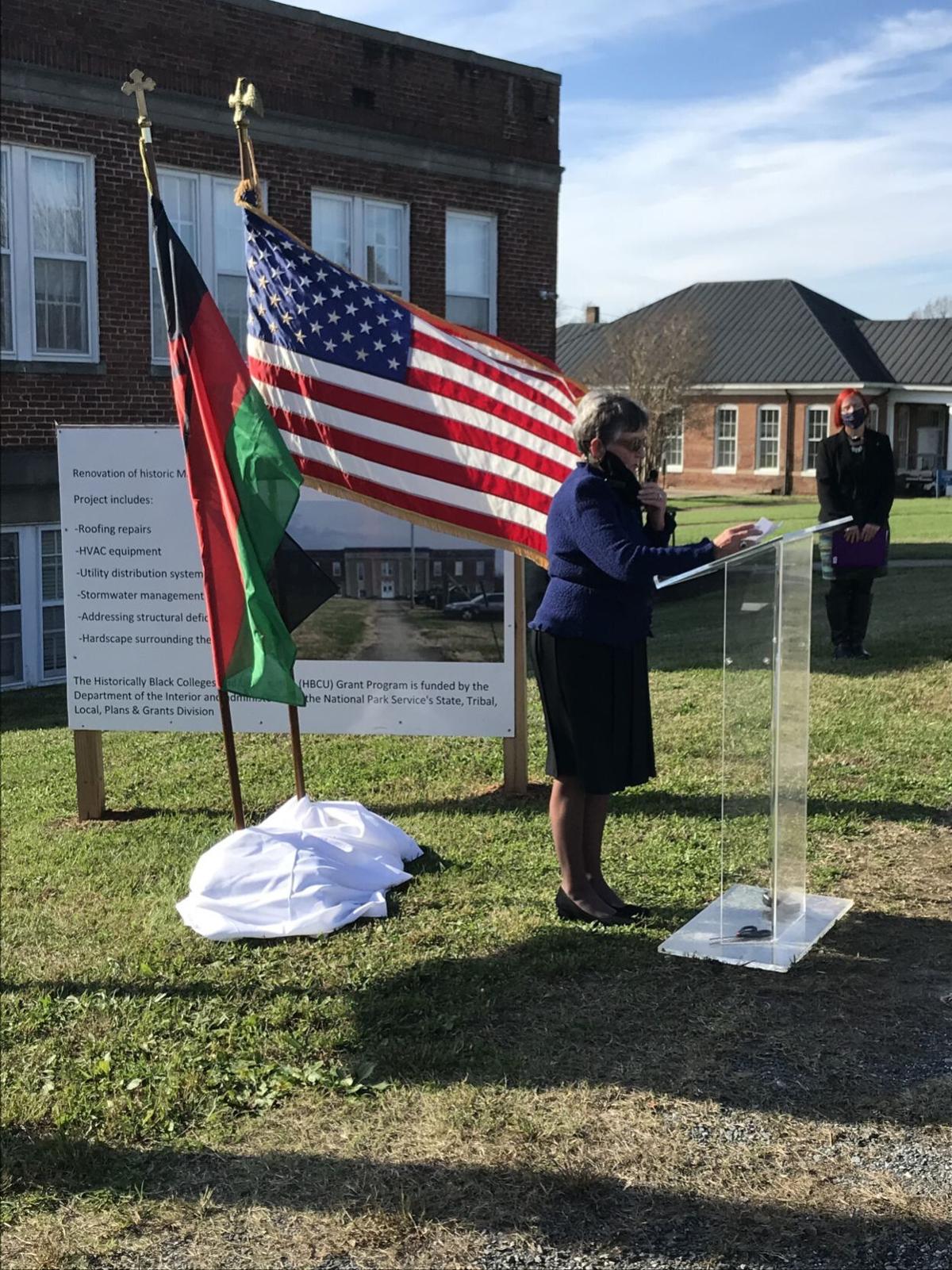 Mayor MaryJane Dolan addresses the crowd as the Malawi and United States flags blow in the wind behind her on Saturday, Nov. 14, 2020. 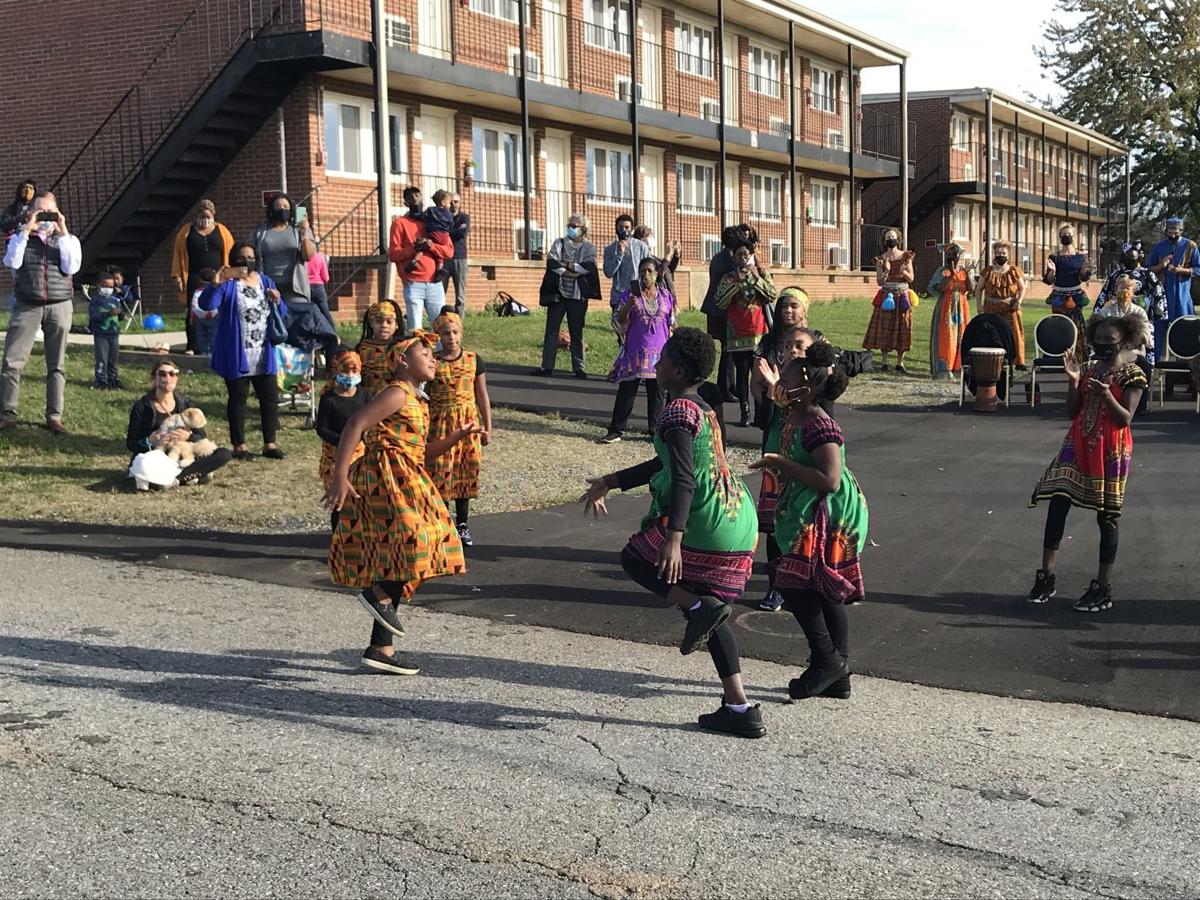 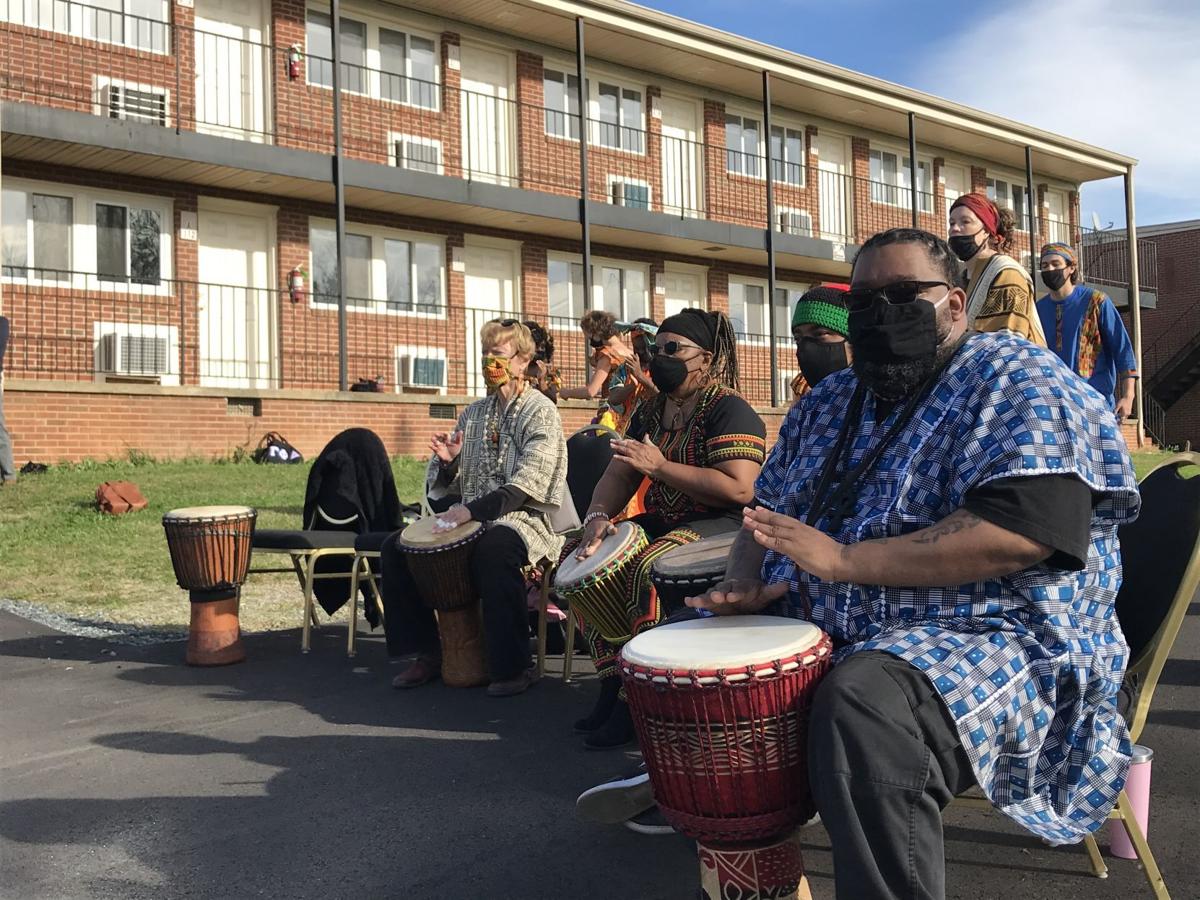 Music is played while the Kuumba Dance Ensemble performs at the Virginia University of Lynchburg campus Saturday, Nov. 14, 2020. 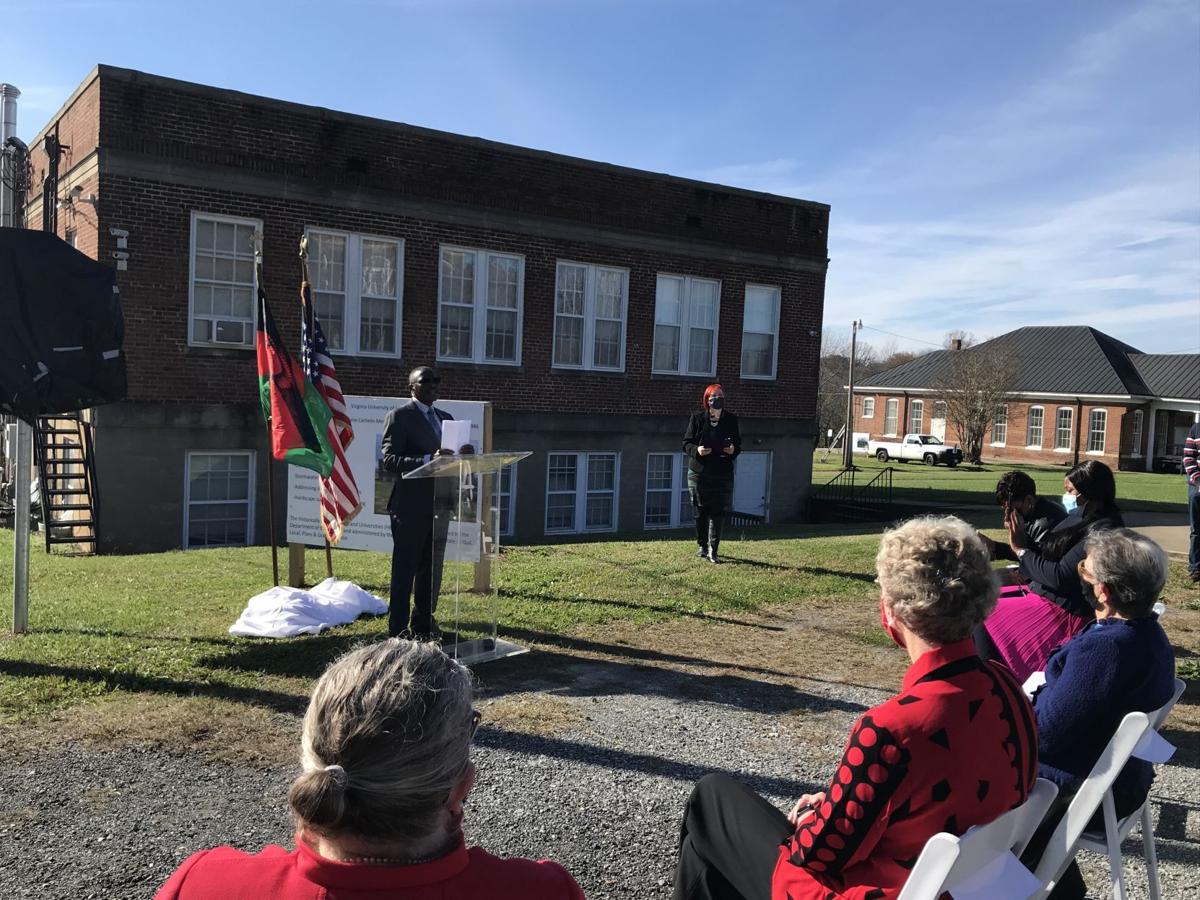 The Rev. John Chilembwe, who studied at Virginia University of Lynchburg, using what he gained from his short time in the United States, led the first major African nationalist uprising against British colonial authorities in the British Protectorate of Nyasaland, present-day Malawi.

“Because of John Chilembwe all we need is a crack in the concrete,” James Coleman, of VUL, said in his sermon-like remarks. “John Chilembwe understood Africans and the struggle of social justice ...”

The African revolutionist whose ties to Lynchburg are considered to be the inspiration for his uprising, was honored Saturday with a historical marker at the university.

Sawerengera, who said he also has roots in the same place Chilembwe called home, said the revolutionist’s story is one that is “close to my heart.”

“This is no mere achievement for a man who lived over 100 years ago,” Sawerengera said in his remarks. “The people of the United States of America must be thanked because they’re the ones that provided the knowledge and also the training because it was here where Chilembwe started ... and when he went back he was not the same journeyman who came from that part of Africa and he was able to challenge.”

The unveiling of the John Chilembwe historical marker was ushered in by dance performances from the Kuumba Dance Ensemble and the event was immediately followed by a socially distanced reception at the gardens of the Anne Spencer House, located only minutes from the VUL campus where the marker was being unveiled.

In his mid-to-late 20s, Chilembwe came to Lynchburg in 1897 and attended Virginia Seminary, a historically Black institution now known as Virginia University of Lynchburg, and studied liberal arts.

During his time in Lynchburg, he was taken under the wing of then-president Gregory Hayes, who at the time was locked in his own battle to wrestle control of the college from white authorities and put it in the hands of Black leaders; which he succeeded in doing.

In 1900, Chilembwe returned to Africa and established Providence Industrial Mission before launching the revolt of 1915.

The 1915 revolt was short-lived, however, and ultimately failed in a matter of roughly a couple of weeks, Michie said, but it would serve to inspire other Africans to follow. On Feb. 3, 1915, Chilembwe was shot and killed by a military patrol.

“[Colonial authorities] didn’t like what Chilembwe brought back,” Michie said. “Gregory Hayes wanted Black people to have a liberal arts education, not just train for vocations. And that was the same for Chilembwe when he brought his mission back to Africa.”

Michie said in her remarks Chilembwe’s mission continually was harassed by white settlers and torn down on numerous occasions by colonial authorities because they disapproved of an African-controlled mission.

Michie said the British government later pointed to what it described as Chilembwe’s “radical education” in the United States — specifically the education and mentorship he received while in Lynchburg attending Virginia Seminary — as a leading factor that drove the revolution.

Charese Chambers, of Lynchburg, said she had never heard of Chilembwe’s uprising and his ties to the Hill City before Saturday, but she was impressed by his story.

“It just continues to remind us how we’re connected not just here but all over,” Chambers said.

Michie said she hopes the installment of the historical marker can help make Chilembwe a household name in Lynchburg.

Chilembwe remains a symbol of liberation in Malawi to this day, according to the text of the marker and John Chilembwe Day is celebrated annually Jan. 15. Malawi gained its independence in 1964.

“I would ask all of you who are here when you leave this place start talking about John Chilembwe,” Sawerengera said. “Tell everybody you meet that there was a man, an ordinary person, who came from here, but he went back as an extraordinary person because America changed him.”

John Chilembwe was the leader, in 1915, of the first major African uprising against colonial authorities in the British Protectorate of Nyasaland (Malawi). Chilembwe had come to Lynchburg in 1897 to study at Virginia Seminary under its president, Gregory Hayes. He returned to Africa by 1900 and set up Providence Industrial Mission before launching the revolt of 1915. A military patrol shot and killed Chilembwe on 3 Feb. 1915. The British Official Commission asserted that a main cause of the revolt had been Chilembwe’s education in the United States. Malawi, where Chilembwe remains a symbol of liberation, became independent in 1964. John Chilembwe Day is celebrated annually on 15 Jan.

Condo in one of Lynchburg's first apartment buildings up for sale

It didn’t take Connie Sowa long to decide to buy her condo in The Parkmont.

The John Chilembwe historical marker is pictured on the Virginia University of Lynchburg campus Saturday afternoon.

Mayor MaryJane Dolan addresses the crowd as the Malawi and United States flags blow in the wind behind her on Saturday, Nov. 14, 2020.

Music is played while the Kuumba Dance Ensemble performs at the Virginia University of Lynchburg campus Saturday, Nov. 14, 2020.