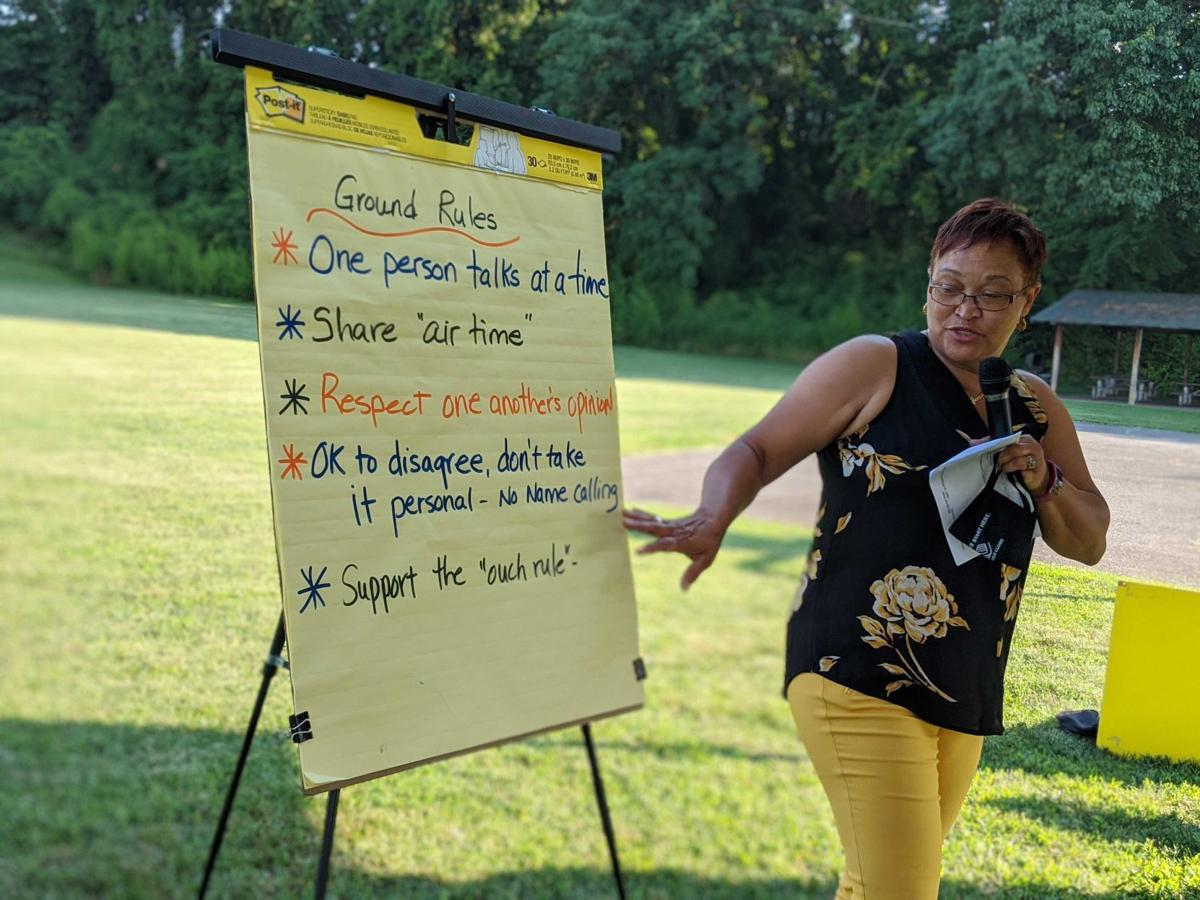 Gloria Witt explains the rules of the first listening session the Lynchburg Police Department held on July 1, 2020 to learn what concerns residents have about policing on the Black community. 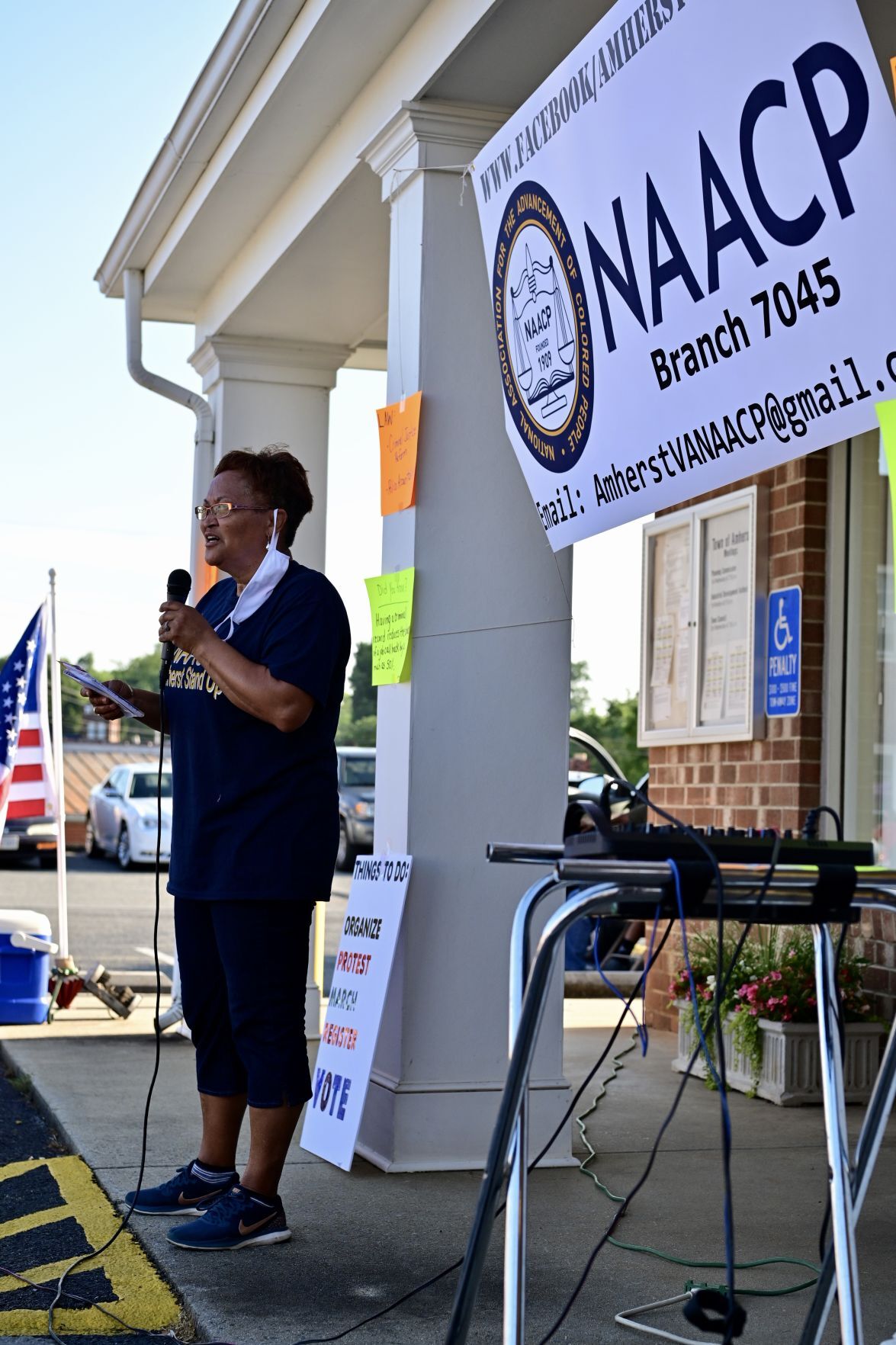 NAACP Amherst chapter president Gloria Witt addresses demonstrators in the "March for Liberty and Justice for All" event on July 18 in front of the Amherst Town Hall.

Our job as your local newspaper is to document life here. What we are experiencing right now is historic on countless levels. Pause with us as we ask some of our Black neighbors to reflect on just one aspect of what is happening — the push for racial equality — and to share their perspective. We look forward to the conversations these will inspire.

AMHERST—As a crowd of more than 50 people stood in intense heat during a recent rally in front of the Amherst Town Hall, Gloria Witt asked anyone within earshot to think of how it was for Black slaves who picked cotton under such conditions.

Speaking up for equality for the Black community during the NAACP-led event, Witt said she was thankful young people stepped up to bring a march to the streets of Amherst to shine a spotlight on social justice in the wake of George Floyd’s death that sparked demonstrations across the country.

“It goes back to the 1960s when you had the sit-ins in North Carolina. Young people are the ones who put the wind under our wings,” said Witt, who for the past four years has served as president of Amherst County’s NAACP branch, in an interview.

She described the Black Lives Matter movement as a catalyst for initiating change and awakening many to find a voice to speak out, which she is much appreciative of.

“I’m grateful for Black Lives Matter because they basically put the energy into the conversation,” said Witt, 59. “We’ve been at this a long time ... this has been 60 years in the making. It’s been a long time before we can make this progressive move ... we are at a wonderful moment to take a leap forward once again if we don’t lose it. We have to know what we want.”

Witt, a Madison Heights native who graduated from Amherst County High School in 1979, has been involved in the NAACP for three decades. She recalls meeting her first white friends in elementary school in a post-segregation Amherst County and said she felt a bit of protection from ugly scenes of racism family members encountered when businesses, schools and the overall way of life were segregated.

“Overall, I think we have a quality police department,” Witt said. “If there are gaps, I think [Viar] is open to hearing them and addressing them.”

Recalling her initial reaction to Floyd’s death, she described it as a tipping point and straw that broke the camel’s back in widespread calls for better race relations. “I said to myself, ‘this is a 21st-century lynching. The only thing missing is the tree,’” Witt said. “I don’t think I’ve ever seen somebody die like that.”

She said the movement for social justice is a combination of younger generations, older folks who recall past decades of oppression, a mixture of races and the LGBTQ community. “It’s just a rainbow,” she said. “That’s what America is.”

Those involved in Black Lives Matter locally should not be viewed as “thugs, animals or rioters,” she said.

“You can’t let a few bad apples stigmatize us,” Witt said. “It is ridiculous to paint the movement as thuggish, criminal behavior.”

She called on those involved in the movement to engage their communities, make their voices heard loud and clear at the ballot box and keep the conversation going while standing against systematic racism.

“They have given us a shot in the arm and we have to make a home run,” Witt said of the movement. “We have to be on the right side of history. Period.”

For Charese Chambers, race has always been a part of the conversation. But something about the Black Lives Matter movement has helped her become more vocal, having more conversations with people in the community about race.

Gloria Witt explains the rules of the first listening session the Lynchburg Police Department held on July 1, 2020 to learn what concerns residents have about policing on the Black community.

NAACP Amherst chapter president Gloria Witt addresses demonstrators in the "March for Liberty and Justice for All" event on July 18 in front of the Amherst Town Hall.