What is the future of solar in Campbell County? Local leadership discusses loss of appetite for county solar projects.
Share this
1 of 5 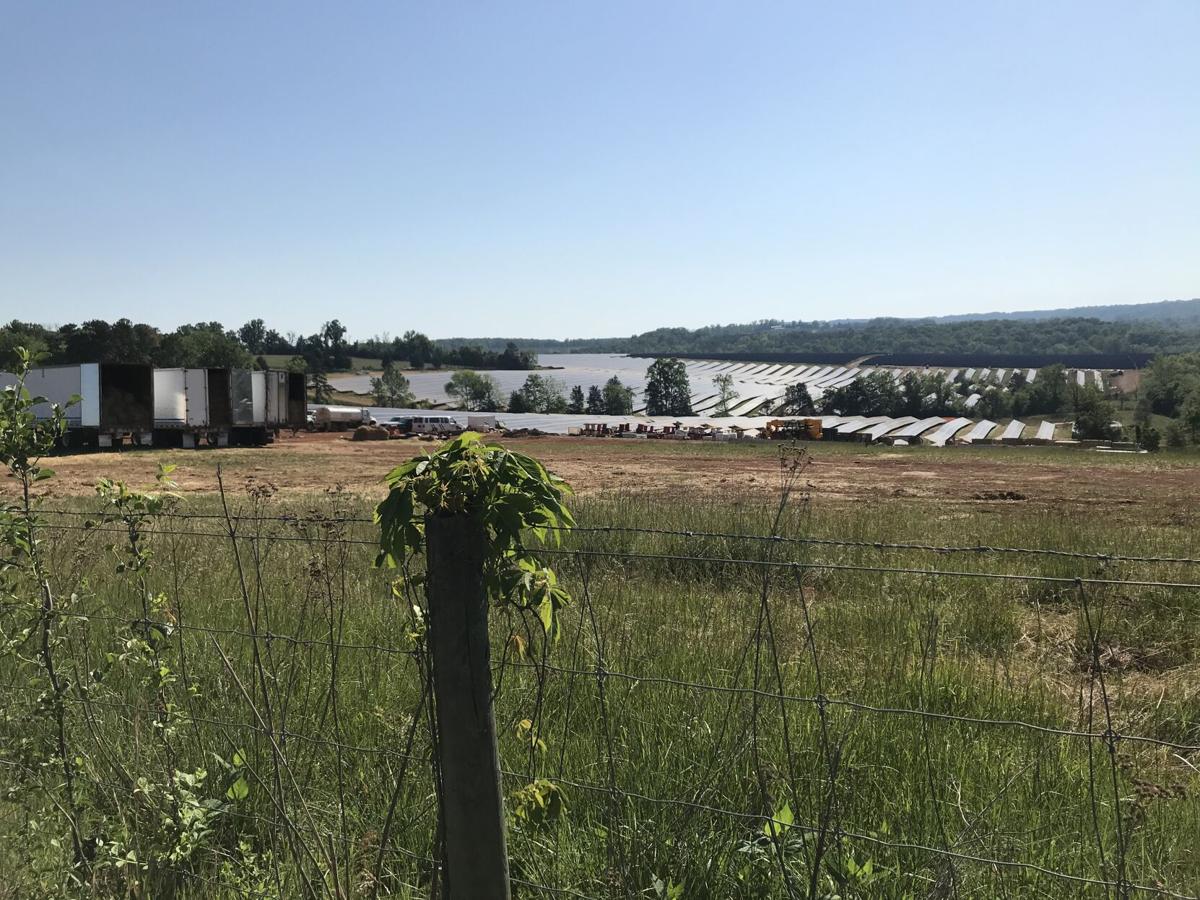 The view from Leesville Road on Wednesday of Altavista Solar, an about 800-acre utility-scale solar project being constructed in Lynch Station. 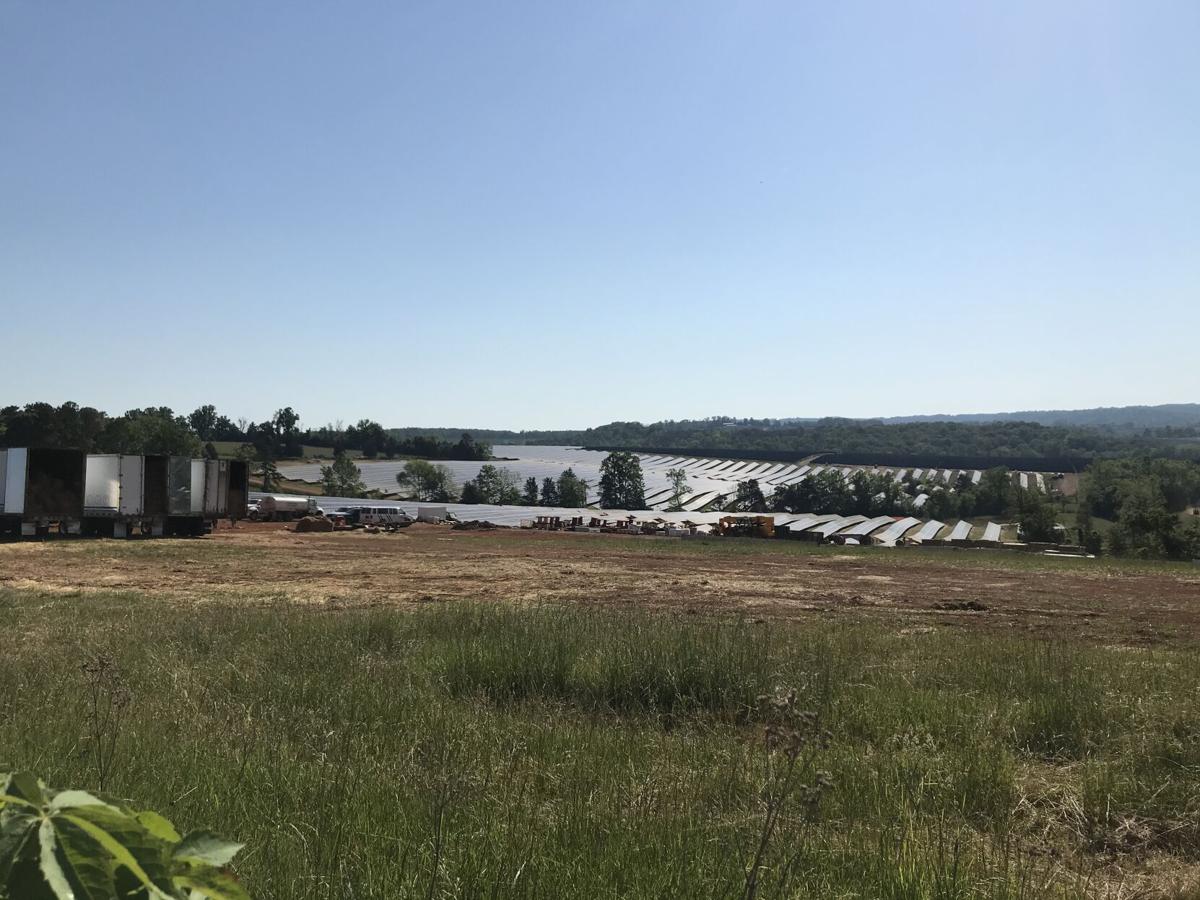 The view from Leesville Road of Altavista Solar, an about 800-acre utility-scale solar project being constructed in Lynch Station on Wednesday, May 19, 2021. 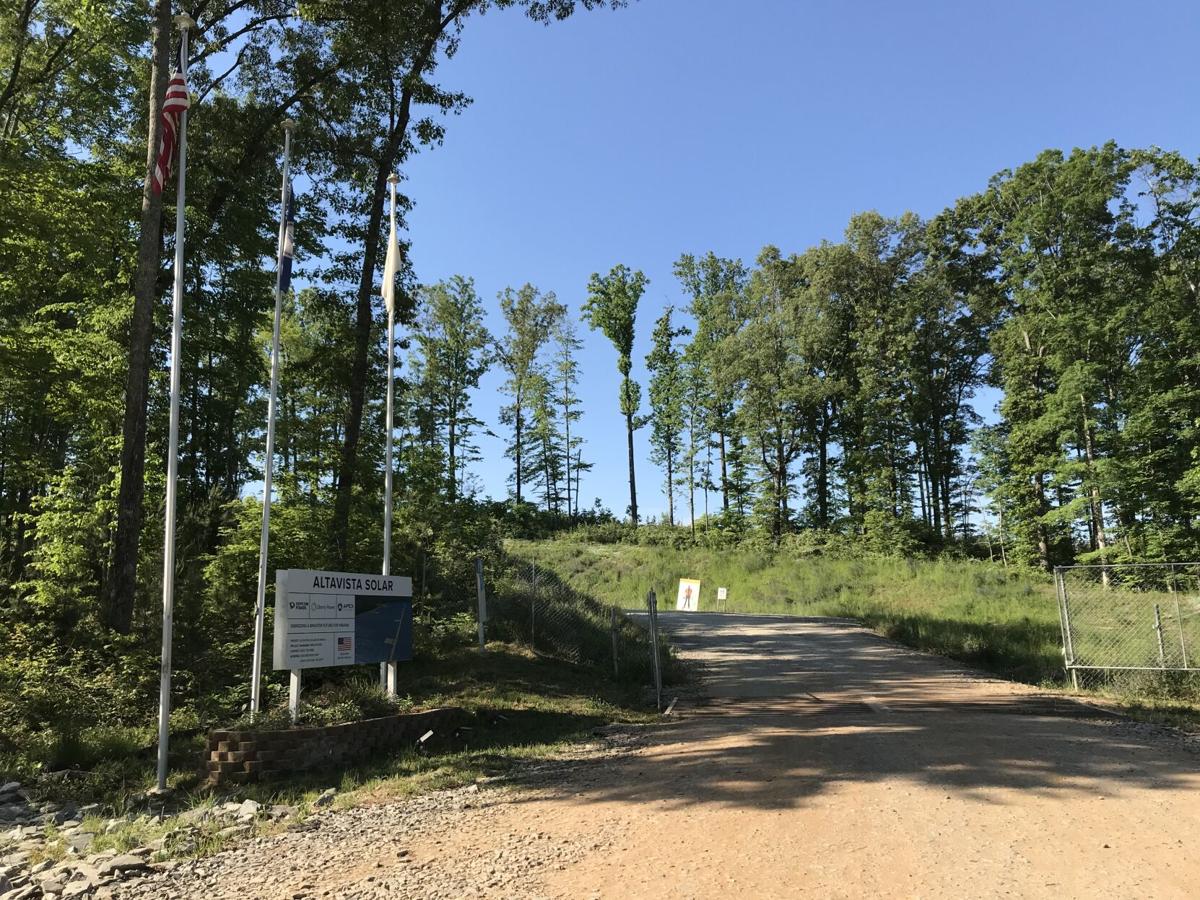 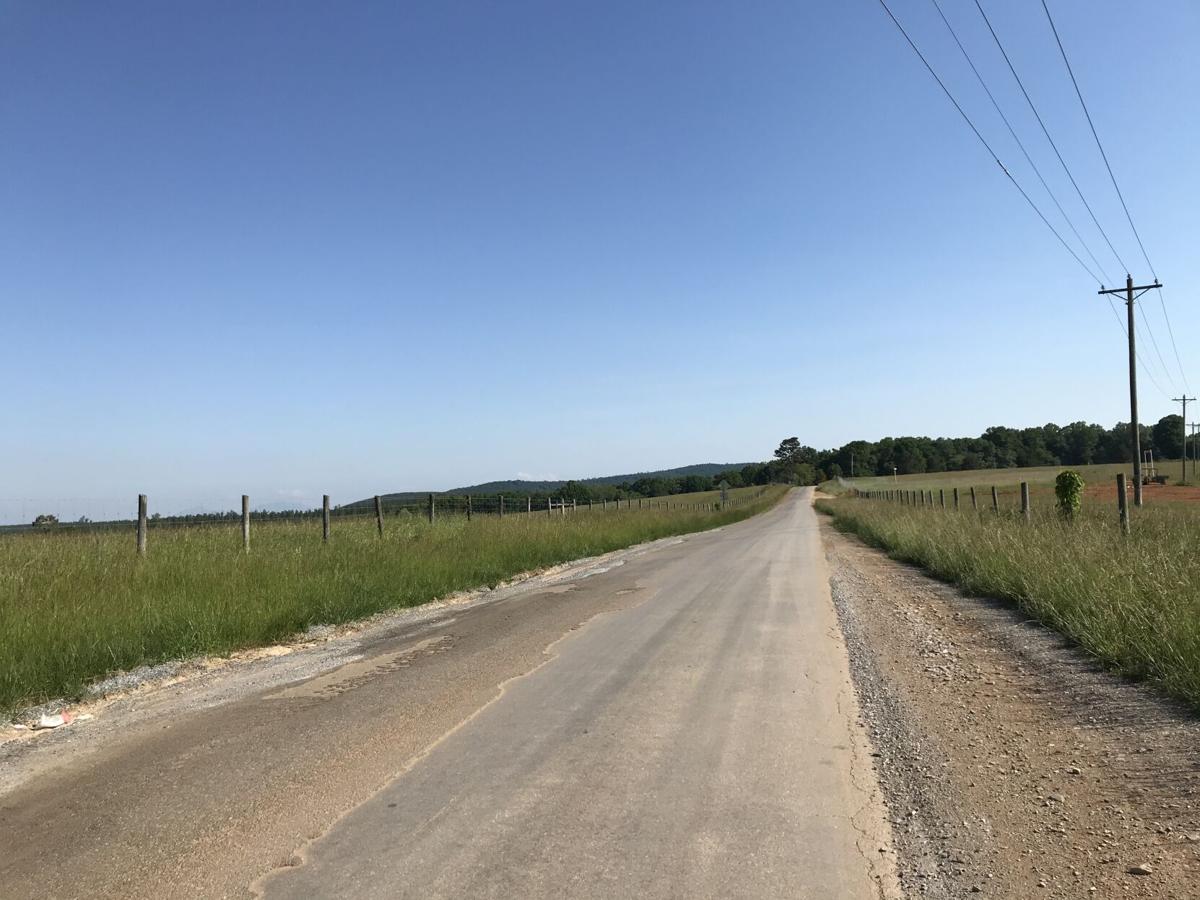 The view down Leesville Road that runs alongside a parcel of Altavista Solar, an about 800-acre utility-scale solar project being constructed in Lynch Station on Wednesday, May 19, 2021. 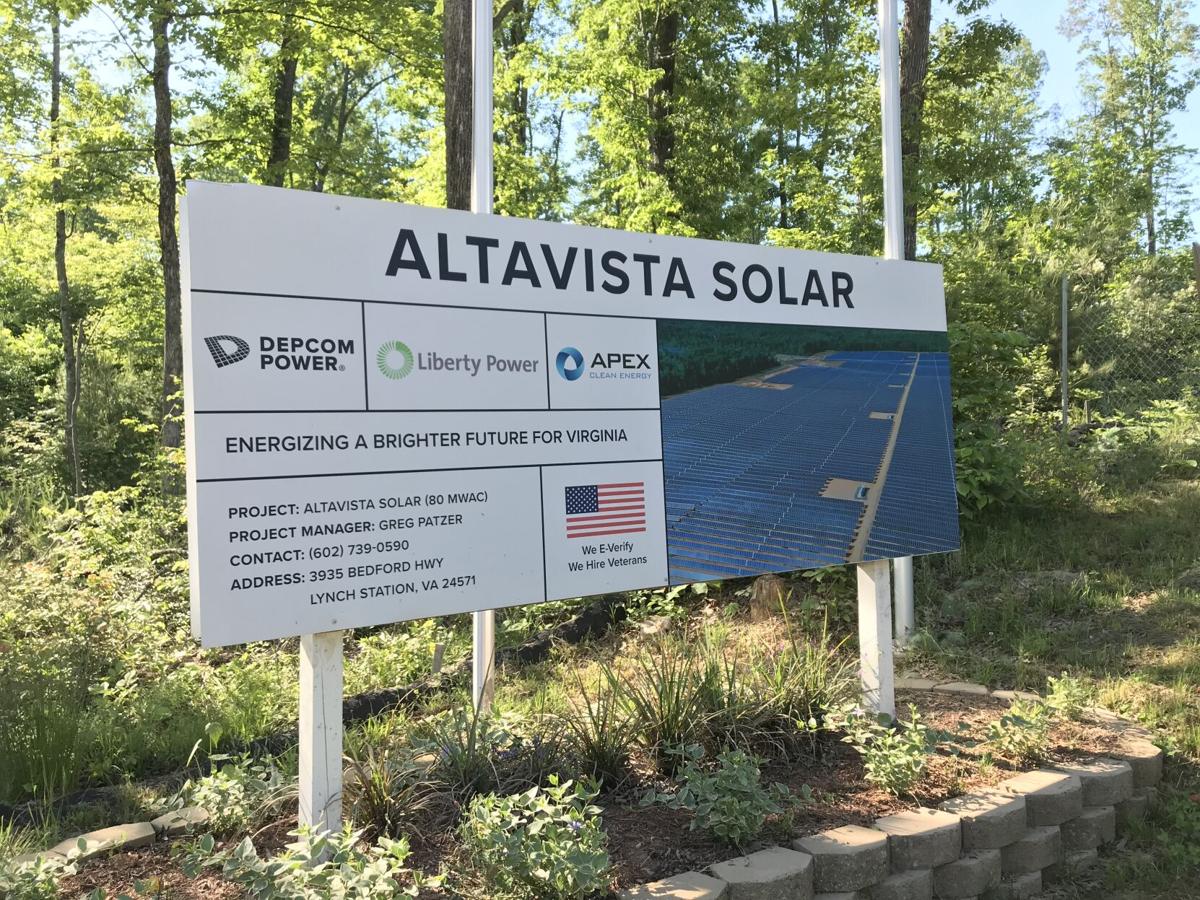 ALTAVISTA — At first glance, the rows of panels could be mistaken for silver water, a rippling lake of glass refracting blue sky, almost alien amid the otherwise pastoral landscape.

Located in Lynch Station, near the intersection of Virginia 43 and Bishop Creek Road, the construction on Campbell County’s first solar farm is well underway. The 1,200-acre utility-scale solar project is slated to have about 800 acres of panels, and its parcels will carve a swathe through what long has been pastures and wooded farmland.

One of four approved projects in the county, and the only project currently under construction, it remains to be seen if this is the beginning — or the end — of solar projects in Campbell County.

The project was approved by the board of supervisors in September 2018. Since it broke ground last June, the solar project in Lynch Station, developed by Charlottesville-based Apex Clean Energy, has generated a number of complaints from surrounding property owners, concerns from local leadership and tied-up county resources as staff attempted to evaluate and regulate the site.

The other approved projects, two slated for Gladys and another for Rustburg, range in size from 125 developed acres to 660. None of them have broken ground, but county staff said the Rustburg solar farm has its permitting in place and could begin construction any day.

Dick Worsham lives about a quarter mile from the solar farm on Leesville Road on property he bought from his grandfather, and has lived on since 1982. Among his concerns, and those of other adjoining property owners, is the “look” of the project. What was rolling pasture and farmland now is an “eyesore,” Worsham said. But more than aesthetics, construction and heavy machinery have left pitted asphalt and torn up roadside in its wake.

Other landowners complain of runoff that has muddied the water of local creeks and streams, running into neighborhood farms and affecting cattle and other livestock.

Ken Jones, who lives off Virginia 43 near the project, said it has “devastated” him with the amount of water, eroding away the creek banks and tracking mud onto the roads, creating hazardous conditions for drivers.

He and other property owners said they tried everything to address the problems — from bringing concerns to local representatives, to contacting the county, the U.S. Army Corp of Engineers, the Virginia Department of Environmental Quality, the local sheriff’s department and even the state police.

“It’s done nothing but make a mess here, disrupt our way of life, and we’ve got no benefit from it,” Jones said. While some issues have resolved with dry weather and as construction moved along, he said no amount of time will fix the soil that has washed away from the creek banks or the view of acres and acres of glass.

Ellyn Cox and her sister take care of their 87-year-old father who lives off of Virginia 43, and she said their daily travels along the roadway often were inconvenienced by a “solid sheet of mud.”

Cox said landowners had to fight to be heard. “This solar farm is not benefitting us. Period.”

The question of benefit is deliberated every time a solar project passes through the planning commission, and then moves to the board of supervisors for the final vote. But Paul Harvey, community development director for the county, said it is “difficult to say how the citizens are actually benefiting from the solar projects.”

This was a major point of conversation among commissioners and supervisors at a joint meeting Tuesday night when they gathered to discuss the future of solar farms in the county. Many of the assembled representatives expressed skepticism toward the projects, particularly in the wake of the concerns surrounding the solar farm in Lynch Station.

There also were discussions of potential regulations, as well as new state laws related to solar projects that could affect them locally, such as legislation allowing solar project developers to negotiate a “siting agreement” with a locality, which may include terms and conditions mitigating impact of a solar facility, financial compensation for the locality and other incentives.

Power generated by the solar projects goes into the power grid, and is not specifically sold to consumers in Campbell County. Harvey said the revenue impact currently for the county is relatively small, but some strategies — such as adopting a local revenue share ordinance or requesting a negotiation of a siting agreement — could allow for greater revenue intake.

All solar energy projects in Campbell County require a special use permit, and are possible in districts zoned agricultural, business heavy commercial and industrial — which altogether make up about 85% of the county.

To date, four solar projects have been approved in Campbell, and another recently was denied in early March as supervisors seem to grow more skeptical of the solar projects. Austin Mitchell, zoning and subdivision administrator, said between the four approved projects, the total developed area of panels would be about 1,982 acres.

“The project in Lynch Station is a nightmare,” said Dale Moore, the Altavista representative on the board of supervisors. He said solar could be good if it was done right — with good communication between developers and the county, a remote setting and no disgruntled neighbors — but when done wrong, is a detriment to the community. And even when a potential solar site seems perfect, he said, you have to ask if it is something you would want in your own backyard.

This was echoed by many of the supervisors and commissioners at the joint meeting — who said not all solar projects were indiscriminately bad, but it was hard to find the tangible benefit for a majority of Campbell County residents.

“On the surface it sounds like a great idea,” said Sunburst District Representative Steve Shockley, “but when you dig down into it, I have a hard time finding more positives to outweigh the negatives.”

While some supervisors expressed a desire for landowners to use their property as they saw fit, even if that means solar farms, Spring Hill District Commissioner William Kirk pushed back — saying since most solar projects are financed in part by government subsidies, then they were taking money out of the pockets of Campbell County taxpayers.

“You can put whatever you want on your land, as long as we don’t have to actually finance it,” Kirk said. “And I believe that’s what we’re doing with these solar projects. We are financing somebody else’s wealth.”

If the county is going to approve solar projects, he said, he wants it to be those that stand on their own without government subsidies.

Brookneal District Commissioner Dean Monroe asked the big question: “Do we want to stop it, or do we want to control it?”

“Let’s fix the things we don’t like,” Monroe said.

Harvey said staff would return to the planning commission and the board of supervisors within the next few months with recommendations for “general policies” that could be used as conditions on future special use permits, depending on the project. He said this didn’t necessarily mean Campbell County would never again consider a solar project, but the county representatives want to address current concerns before they do.

Amazing inventions that were made by accident

The view from Leesville Road on Wednesday of Altavista Solar, an about 800-acre utility-scale solar project being constructed in Lynch Station.

The view from Leesville Road of Altavista Solar, an about 800-acre utility-scale solar project being constructed in Lynch Station on Wednesday, May 19, 2021.

The view down Leesville Road that runs alongside a parcel of Altavista Solar, an about 800-acre utility-scale solar project being constructed in Lynch Station on Wednesday, May 19, 2021.