So bid the enigmatic witches of playwright William Shakespeare’s classic, haunting tragedy, "Macbeth" — and so bids Wolfbane Productions to audiences who arrive to the Silver Thorn tavern in Appomattox for a new, immersive adaptation of the play this month.

Co-founder and artistic director of Appomattox-based Wolfbane Productions, Dustin Williams — who also stars as Macduff, part of Macbeth's circle and the loophole to a prophecy who brings down the tyrannical usurper — set this immersive version of William Shakespeare’s Scottish Play in pre-history Scotland, more around the time of the historical Macbeth, who lived and ruled in the 1000s. Through a remix of the original script for "Macbeth," plus borrowing lines from additional Shakespearean works, Williams brought Wolfbane’s "Macbeth" to life, intertwining true history and Shakespeare’s historical fiction angle like intricate Celtic knots.

Shakespeare’s famous tale of ambition, corruption, betrayal, the torture of guilt, and the bloody consequences of it all is retold through the eyes of Lady Macbeth, the cunning, powerful leading lady portrayed by Shakespeare as ruthless and conniving. The gaps in her story left in the original play’s script are filled in and brought to the forefront as Williams crafted the adaptation around the historical queen of Scotland, Gruoch, and her character as portrayed in theater.

Although Williams said his "Macbeth" adaptation is not meant to be historically accurate — neither was Shakespeare’s original — history and research still heavily inspired this version of the story.

In addition to employing classical fantasy flair reminiscent of author George R. R. Martin's "Game of Thrones" book series — made into a hit HBO show — the role-playing video game "Skyrim," and contemporary Viking and medieval-set media, Williams and the Wolfbane team were heavily inspired by history. In this adaptation, Williams captured more cultural nuance: the nation the world knows as Scotland today was vastly different in the 1000s, and diverse. Wolfbane drew upon the Picts, and Viking influences brought by Scandinavian and Nordic peoples that impacted Scotland and the old kingdom of Moray, lending a level of authenticity to the production.

“We had fun trying to figure out what that culture looked like that was kind of a mashup between Scottish, Irish, and Nordic/Viking,” Williams said.

For those who may have experienced Wolfbane's last production of "Macbeth" at Devil’s Backbone brewery in 2014, this adaptation is a new story and setting, Williams said.

Partly influenced by Williams’s trip to Scotland a few years ago, which included visits to Iron Age sites and regions where Macbeth was set, the immersive experience invites the audience into the Silver Thorn mead hall.

The tavern is a character in itself, Williams said. In fact, that was always the vision when the company constructed the indoor/outdoor venue. He had always envisioned "Macbeth" being the first major production in the space, which was completed during COVID-19 pandemic shutdowns.

“I think the more we started working on this show, the more I realized that the pub had to be a featured character, and it became a big character, so the show has kind of become a ghost story that takes place in the haunted Silver Thorn pub,” Williams said.

At the wooden banquet tables of the Silver Thorn, under the glow of candlelight and torches, breathing in the heady scents of smoke and sage, attendees can enjoy mead and refreshments amidst décor of leather hides and clan banners of the play’s main characters. They can toast to Scottish victories, tremble at the thunder and lightning, and join in a reel or two. It also is advisable to wear something one would not mind potentially getting a little (stage) blood spatter on.

“I believe that theater is meant to be not seen on a separate place, but be experienced,” Williams said. “You can watch 'Macbeth' on the stage and it’s easy for somebody to nap, but there’s no way somebody’s going to get to nap in this space when we’re literally running through with swords in front of your face, and screaming at you, and getting you up to dance. Or get blood on you.”

The play’s immersive approach calls to mind Shakespeare’s original staging conditions, where audience members got to sit on stage and interact with the actors during performances.

Working with historical inspiration opened the door not only for an exploration of the Picts and Vikings, but for a glimpse into the real life of a remarkable Celtic woman.

The first documented queen of Scotland, Gruoch was a royal in her own right. She came from a family with blood claims to both the throne of Scotland, and the kingdom of Moray, a separate entity with its own monarch at the time.

“Lady Macbeth was really a key to the throne,” Williams said. “That really inspired a lot of our reading.”

Just as portrayed in Williams’ adaptation, in which Gruoch starts off married to King Duncan, Gruoch was married to someone else before Macbeth. Her first husband was Gille Coemgain Macrory, Earl of Moray, who was Macbeth’s cousin, according to British Peerage and other sources. Their marriage was not a long one, however: Gruoch was widowed and left with a young son when Macrory was killed. It was after this that she took Macbeth as her next husband. Macbeth’s marriage to Gruoch was politically strategic; it helped solidify his own claim to the line of succession in Scotland, as well as Moray. He took kingship in both his own name and the lady Gruoch’s — now Lady Macbeth. Through this union, they solidified their power and historically brought stability to Scotland during their reign.

However Gruoch/Lady Macbeth is depicted in character by Shakespeare, her historical significance cannot be overstated, both on stage and in real life.

For Petra, allowing Gruoch/Lady Macbeth to explain herself was significant and rewarding. She said she views the story as one of a woman claiming her own agency and autonomy through obtaining power, rather than merely a power-hungry, vindictive, selfish lady.

“When you read 'Macbeth,' yes, the lady’s always kind of the driving force, but it’s very easy to see her as a maliciously driving force, hungry for power and things like that. For me, it was always about her getting autonomy over her own life back,” Petra said. “Now, because the narration kind of shifted, and because of the big change that she is married to Duncan in the beginning — it becomes not only a struggle for the autonomy over her own life, but a struggle for the love [of] her life. It becomes much more a fight for love, and power is something that comes with it as a secondary thing for her. That changed the whole narrative for me.”

Petra said this story — particularly Williams’ adaptation — is one of fierce, unadulterated love, a love that someone would do anything for, even something nefarious.

Extended travels in Scotland prior to the show helped Petra better understand the character of the people Gruoch/Lady Macbeth came from, she said. Being on Scottish soil, seeing the rugged and wonderfully wild landscapes, exploring sites of antiquity where the footprints of ancient people remain, and breathing the Celtic air brought to life the context in which the land’s ancient populations had to survive in.

“I tried to really envision what it was like to meet Macbeth at 11 years old, and Banquo as well, and grow up together with Banquo as our brother, basically,” Petra said. “To love each other so passionately, to steal away in the night, to be ripped from my bed in the middle of the night to marry a man I didn’t know was three times as old [as me]. To have a child and lose that child.”

The cast of 12 portrays the roughly 20 characters in the show, featuring the likes of nobles, witches, servants, murderers, warriors and spectral figures.

“We do draw upon a lot of fantasy elements at the same time, because we know audiences kind of expect certain things,” she said. “We just really tried to stay rustic with everything that we brought into it, even down to the horned cups and pewter mugs that they use in the banquet hall.”

Wooden planking was donated from a local sawmill, and the leather hides hung in the Silver Thorn also were donated from a local business, Yepsen said. She designed clan banners based on the animals ascribed to various characters in Shakespeare’s play: Macduff as the lion, Macbeth as a dragon, Banquo as a wolf. Each clan banner is adorned with Celtic knots, an art form that Yepsen has a personal soft spot for, as she said part of her heritage is Irish.

For a “tribal” feel largely pertaining to the famous, massively influential witches who hold tremendous sway over Macbeth, chandelier fixtures made with branches and adorned with animal bones and other trinkets were added to the scene.

Costuming, too, was carefully designed and curated. Yepsen opted for neutral, earthy tones, and layers featuring linens with leather and furs for a textured look. You won’t see the iconic Scottish tartans, the plaid clan prints that are so familiar today; those did not exist in Macbeth’s era, Yepsen explained, and so were not included.

With witches, boiling cauldrons, ghastly apparitions, prophecy and curses, dark and stormy nights, and bone-chilling hauntings, "Macbeth" makes for a perfect “spooky season” play — an idea not lost on Wolfbane. “Double, double toil and trouble” is possibly one of the most famous, universally known witch chants, courtesy of Shakespeare and the three weird sisters of the Scottish play — witches who, in Wolfbane’s version of the tale, were called in by Lady Macbeth/Gruoch to aid in her designs.

Audiences are invited to “screw your courage to the sticking place” and find show dates and times, ticket prices and more information online at wolfbane.org.

A home in the Meadows apartment complex in Lynchburg was struck by gunfire Sunday afternoon, but no injuries were reported, police said.

For a few weeks between Thanksgiving and Christmas, the Lynchburg Community Market transforms into the annual Mistletoe Market, giving patrons…

In a landlocked city with only 50 square miles and a growing population, Lynchburg city staff and area nonprofits are planning how to shape th…

As the time came for local Boy Scout Jacob Cantrell to seek out ideas for his final Eagle Scout project, the 17-year-old said he had one goal …

China's protests over lockdowns spread to campuses and communities abroad

China's protests over lockdowns spread to campuses and communities abroad

Sabina Petra, as Lady Macbeth/Gruoch, and Hubbard Farr, as Macbeth, are shown in Wolfbane’s “Macbeth” adaptation.

Dustin Williams, co-founder and artistic director of Appomattox-based Wolfbane Productions, is shown as Macduff in his adaptation of William Shakespeare's "Macbeth." 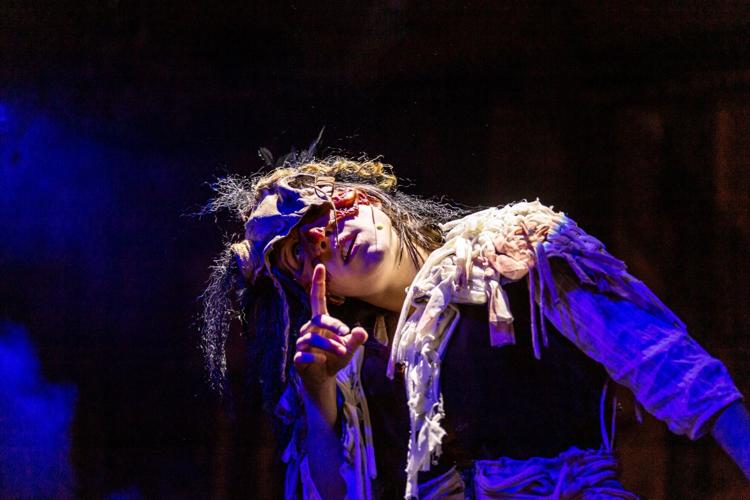 Heather Whalen is shown as Witch 1 in Wolfbane's "Macbeth" adaptation.