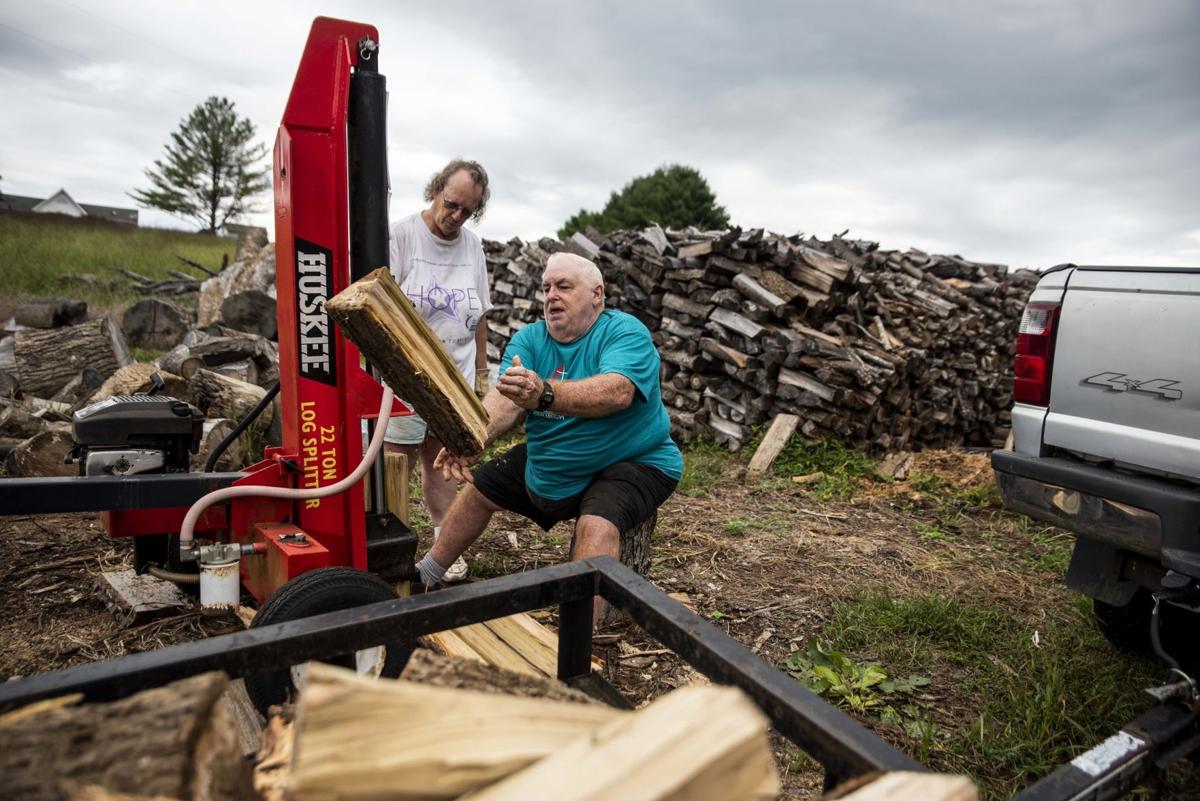 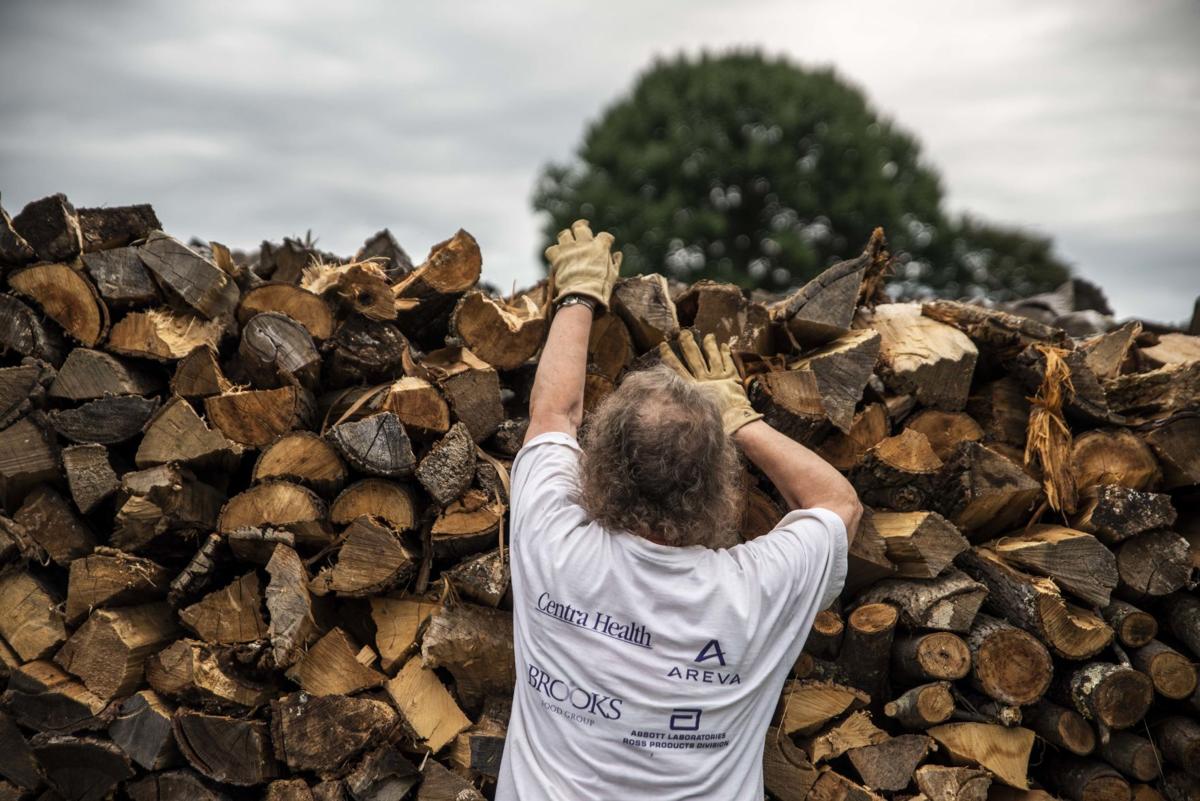 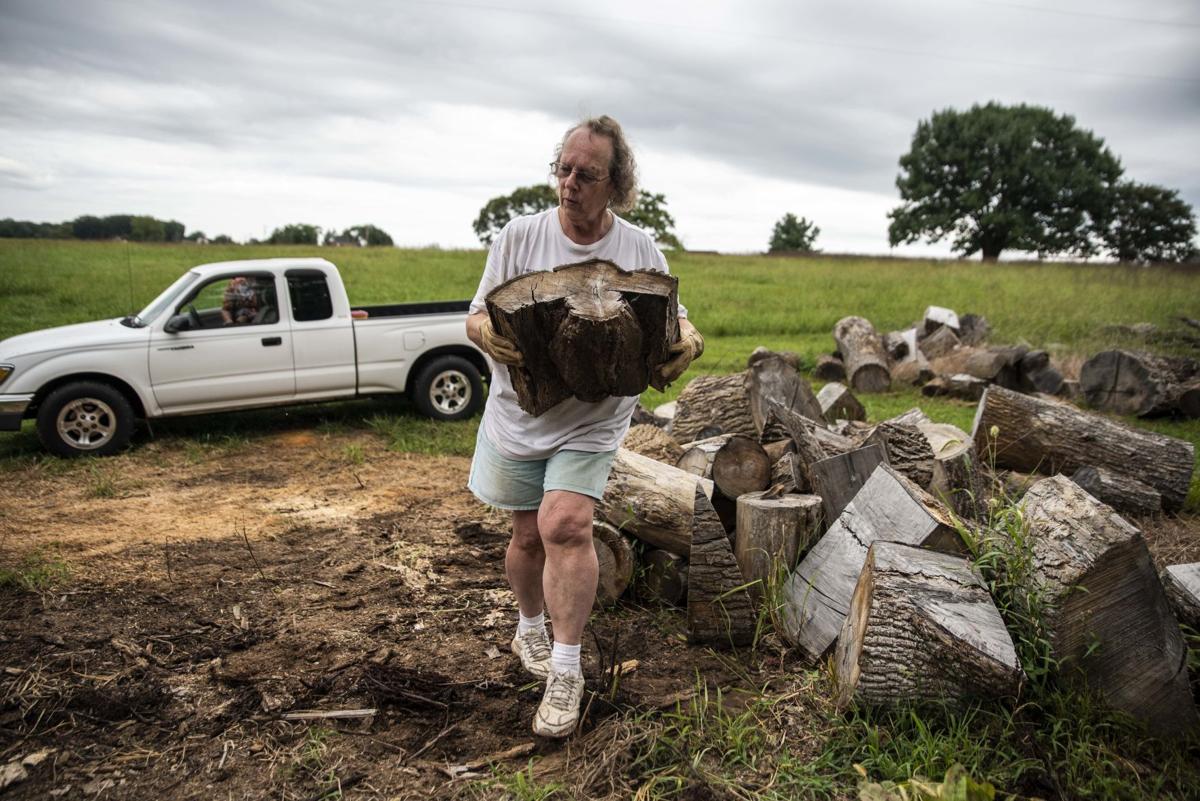 Susan Layne carries a log to be split for wood ministry with Main Street United Methodist Church in Bedford on Monday, Sept. 14, 2020. 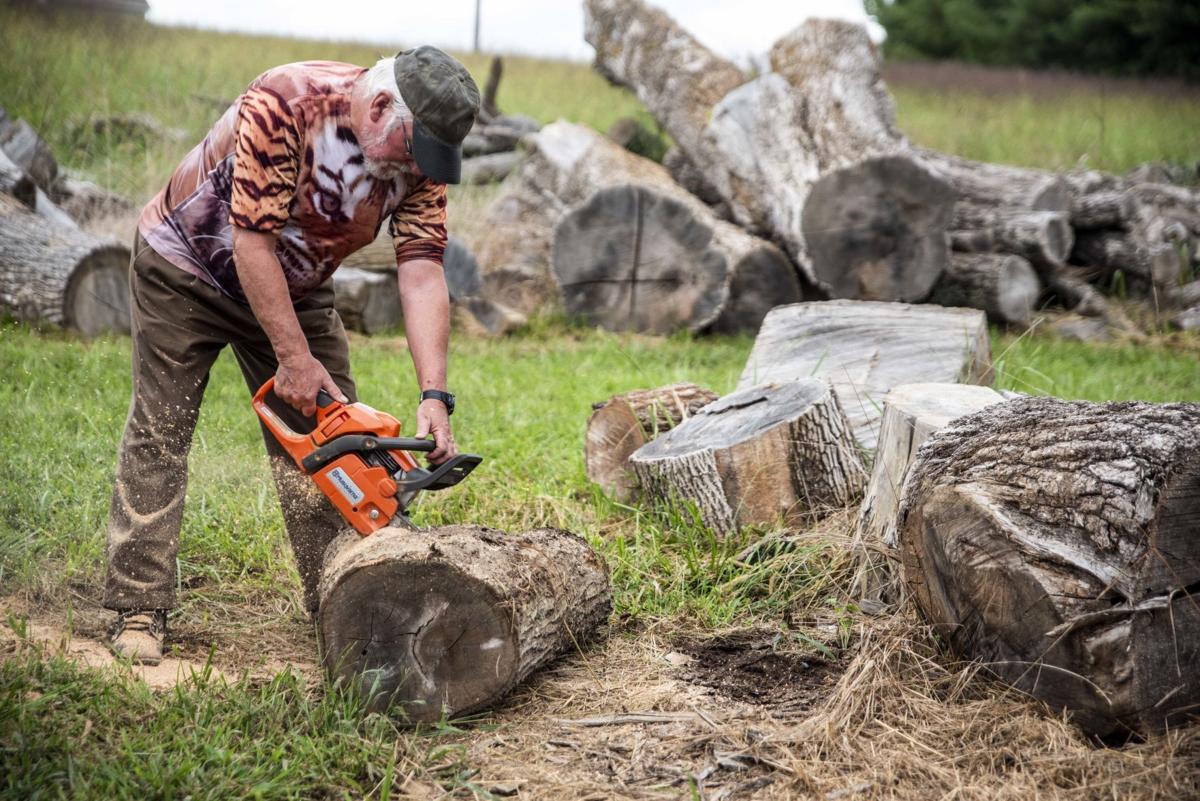 Updegraff cuts a log down to size to be split into usable pieces. Clients are referred to the ministry through Bedford Christian Ministries, Smith Mountain Lake Ministries and the Bedford County Department of Social Services. 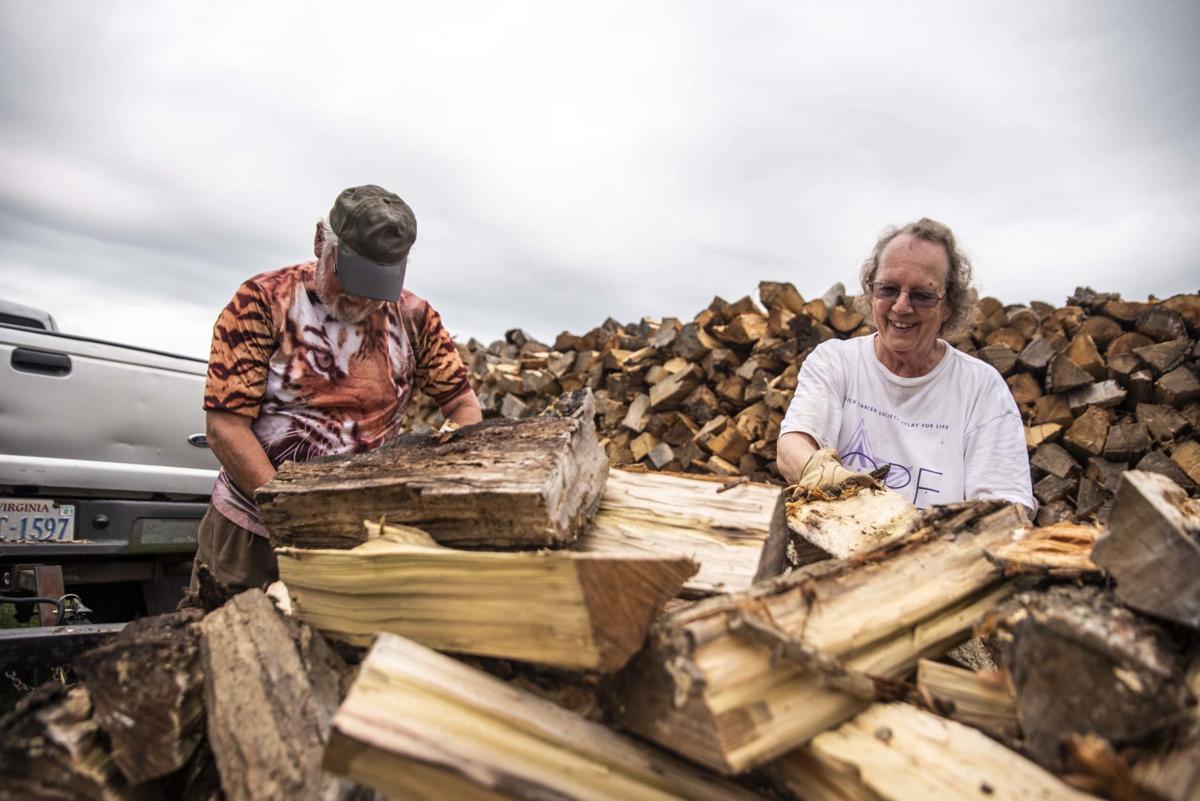 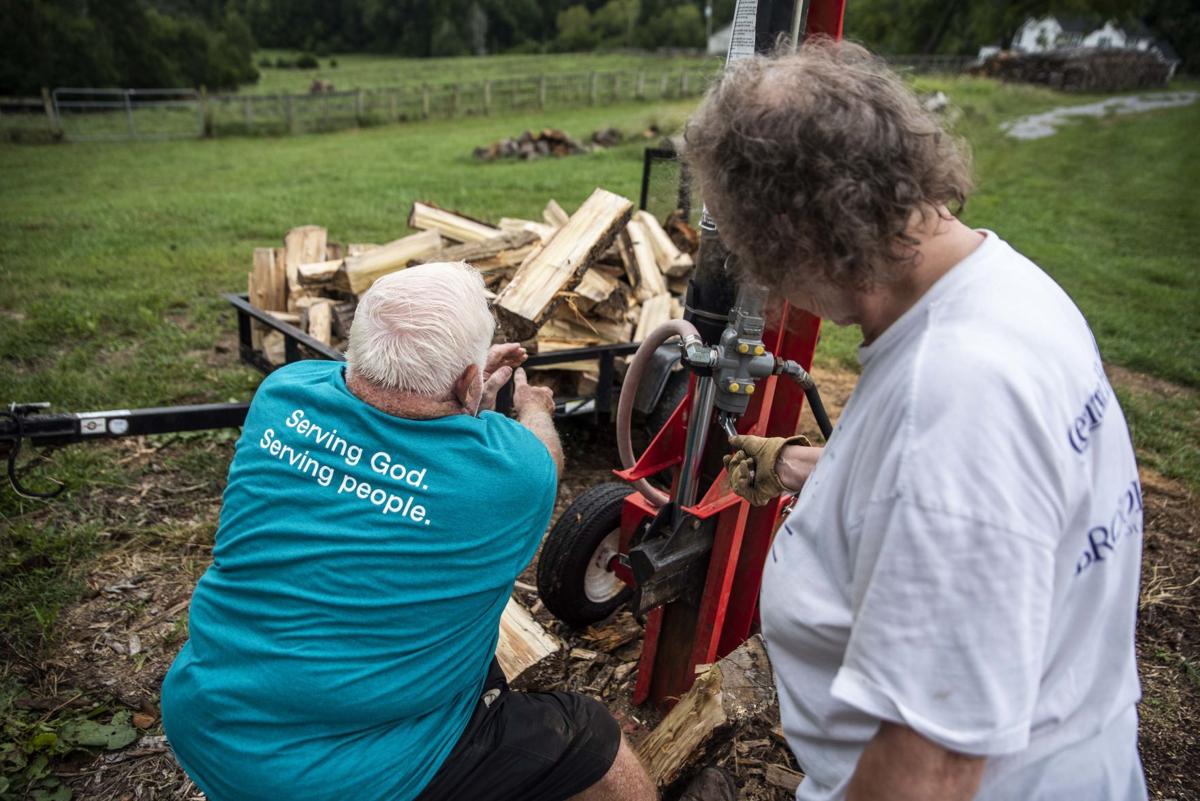 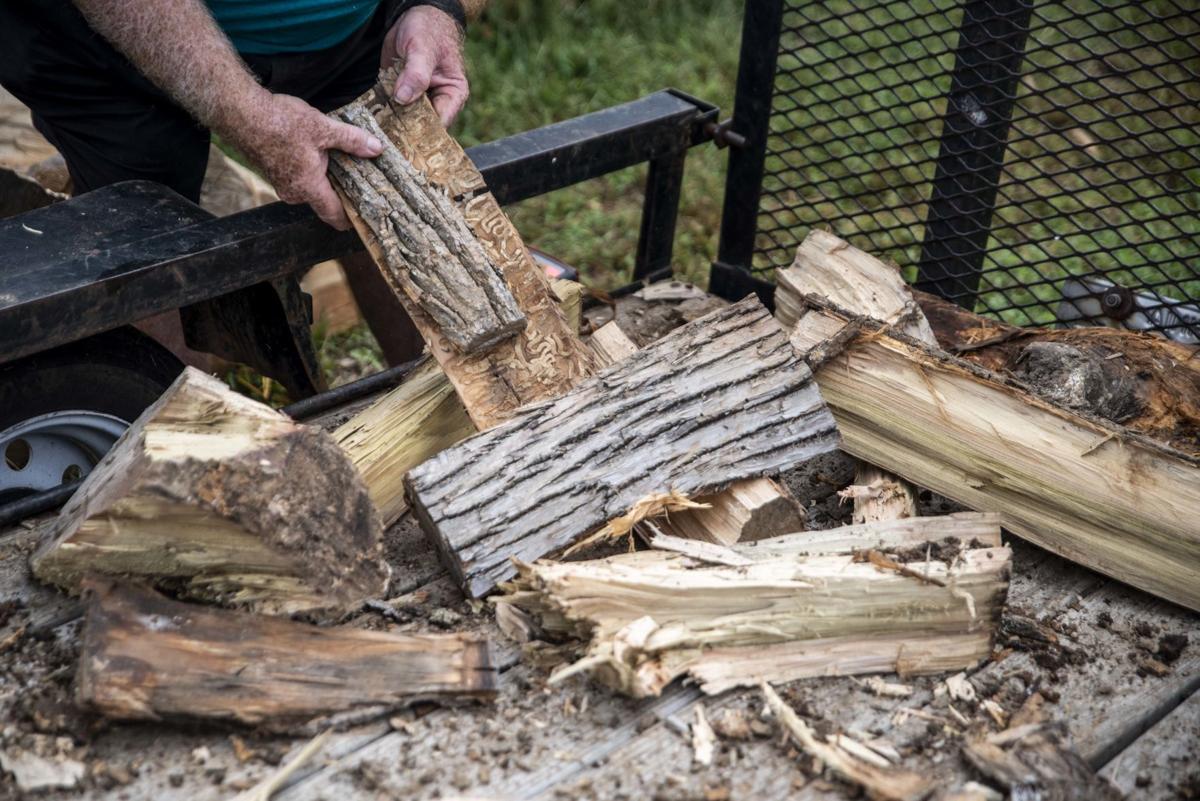 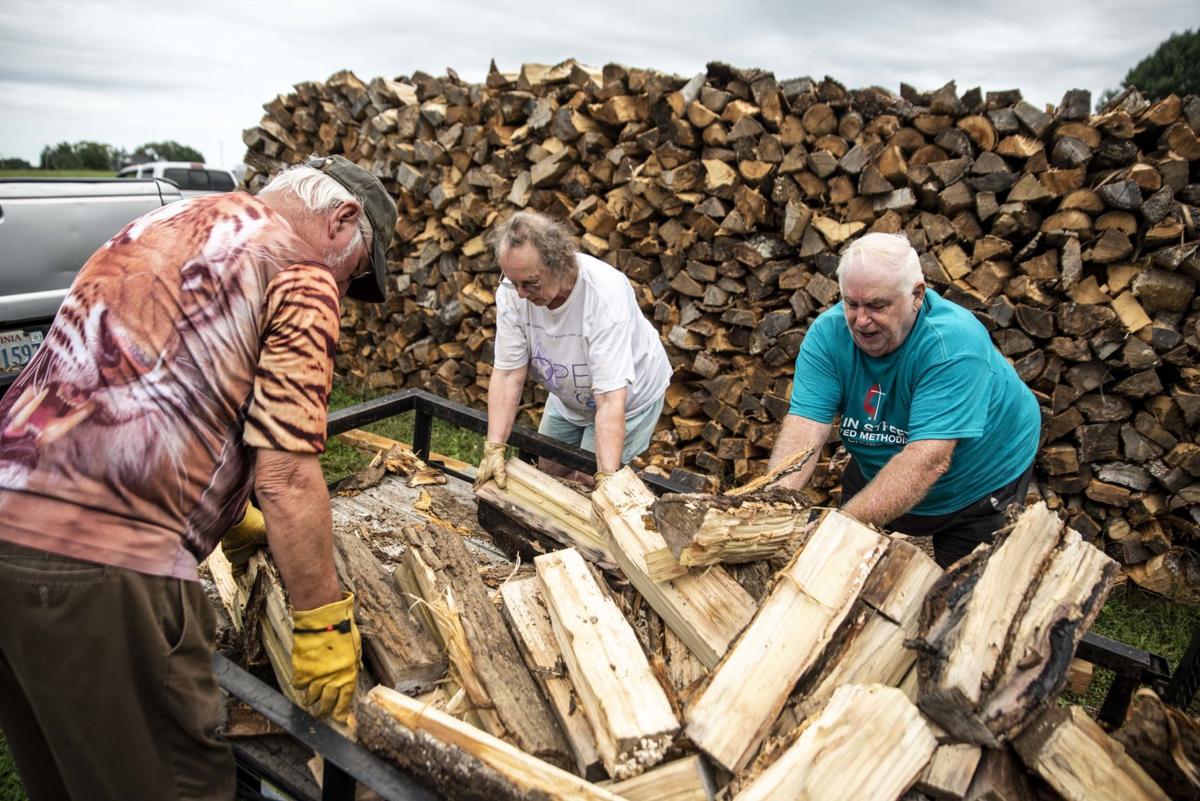 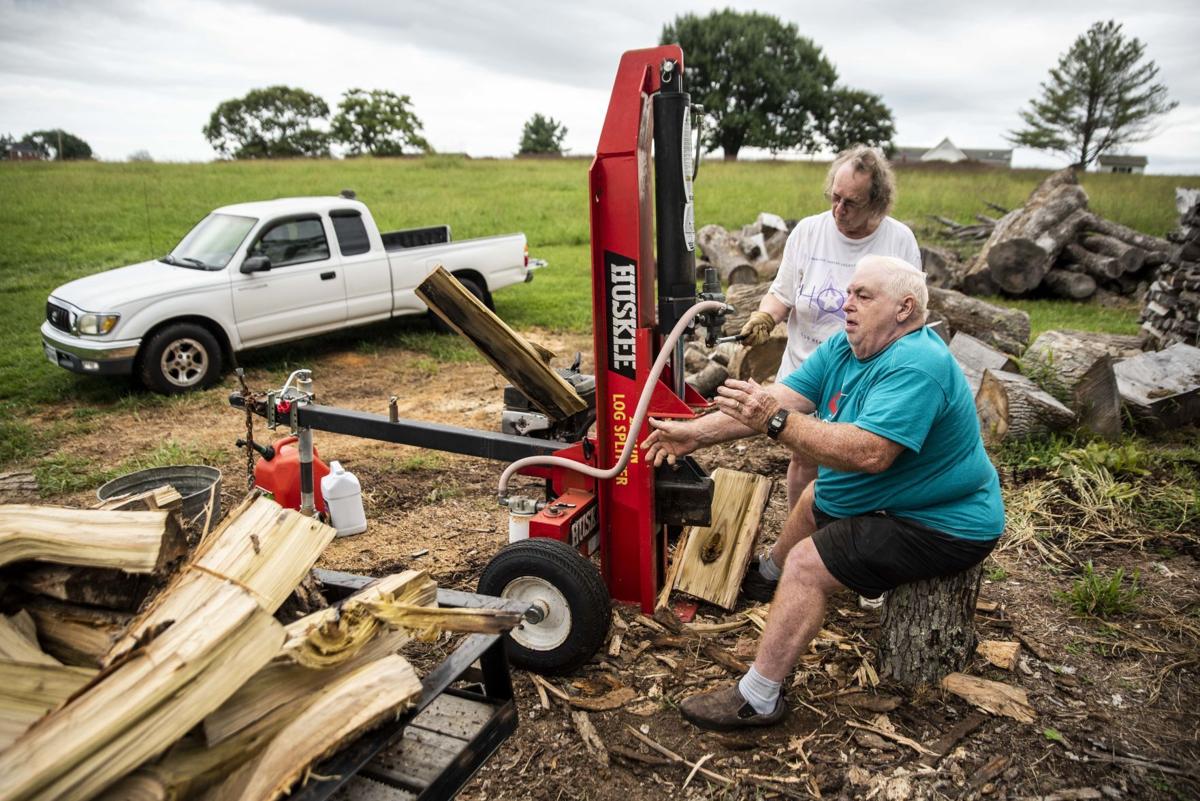 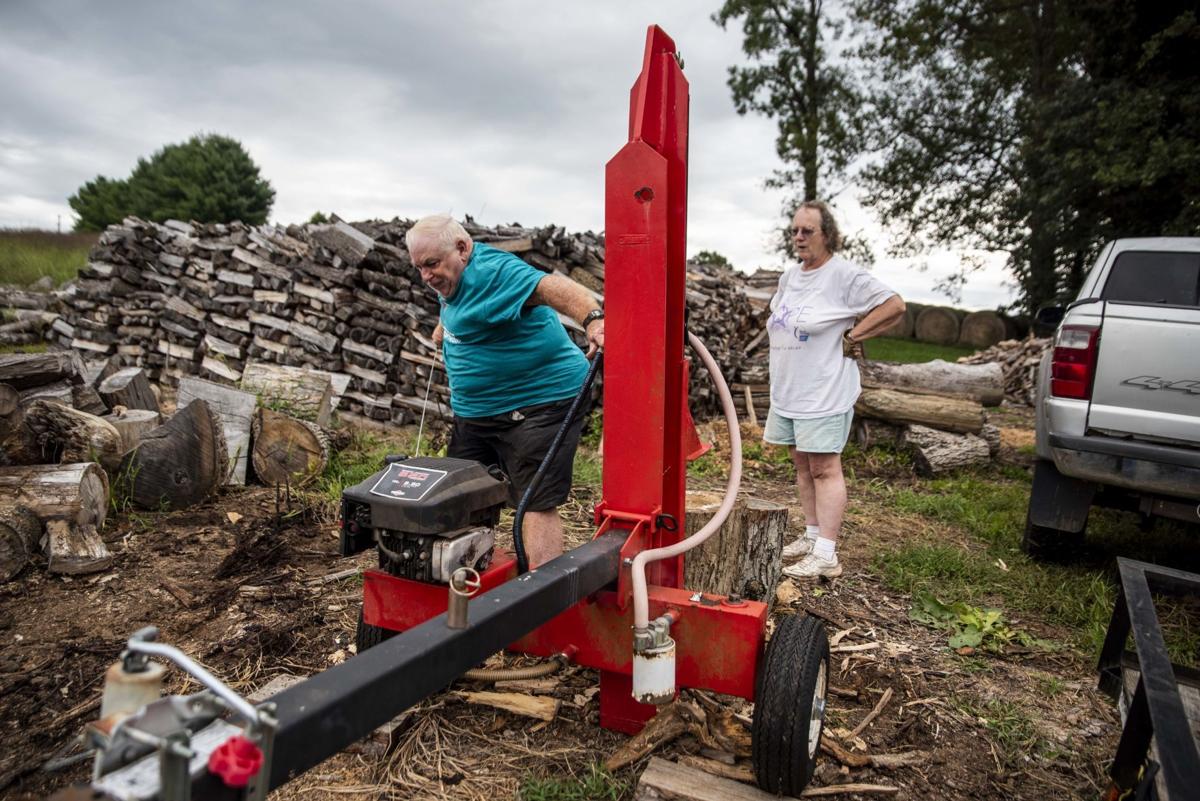 Susan Layne watches as her husband Robert Layne starts up the wood splitter to cut logs for wood ministry with Main Street United Methodist Church in Bedford on Monday, Sept. 14, 2020. 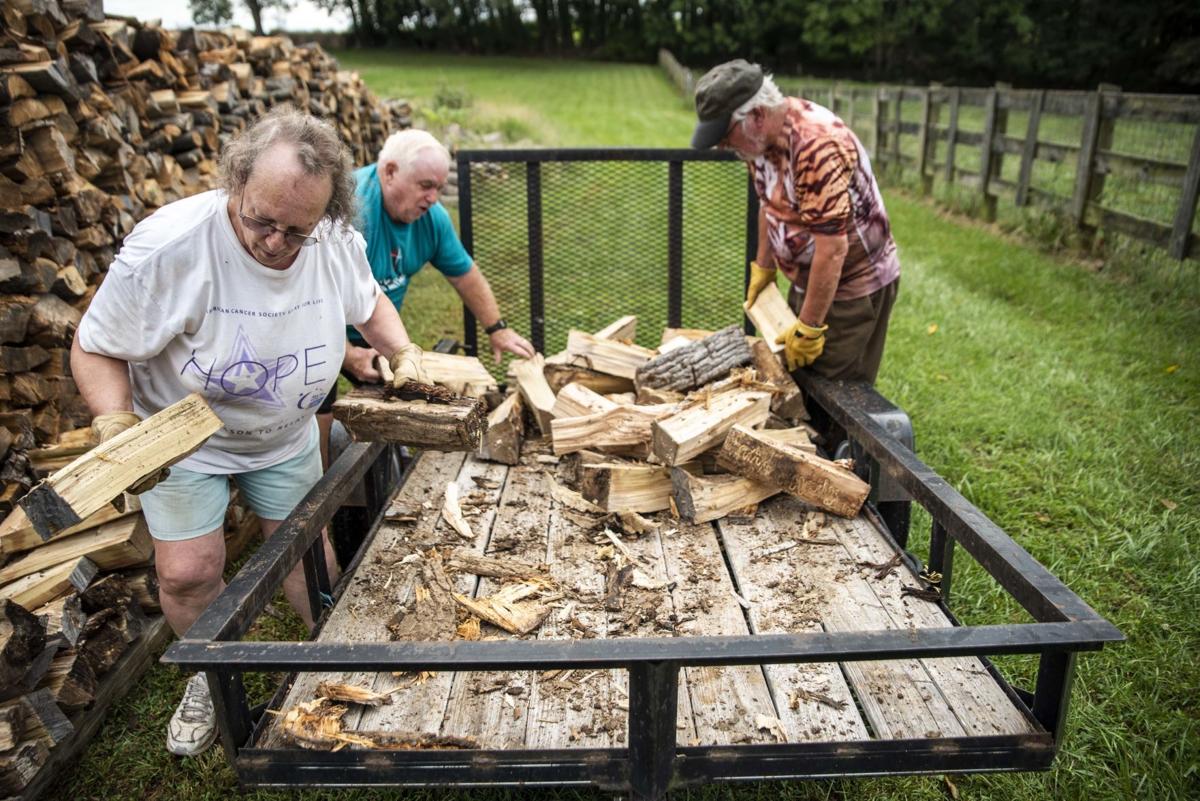 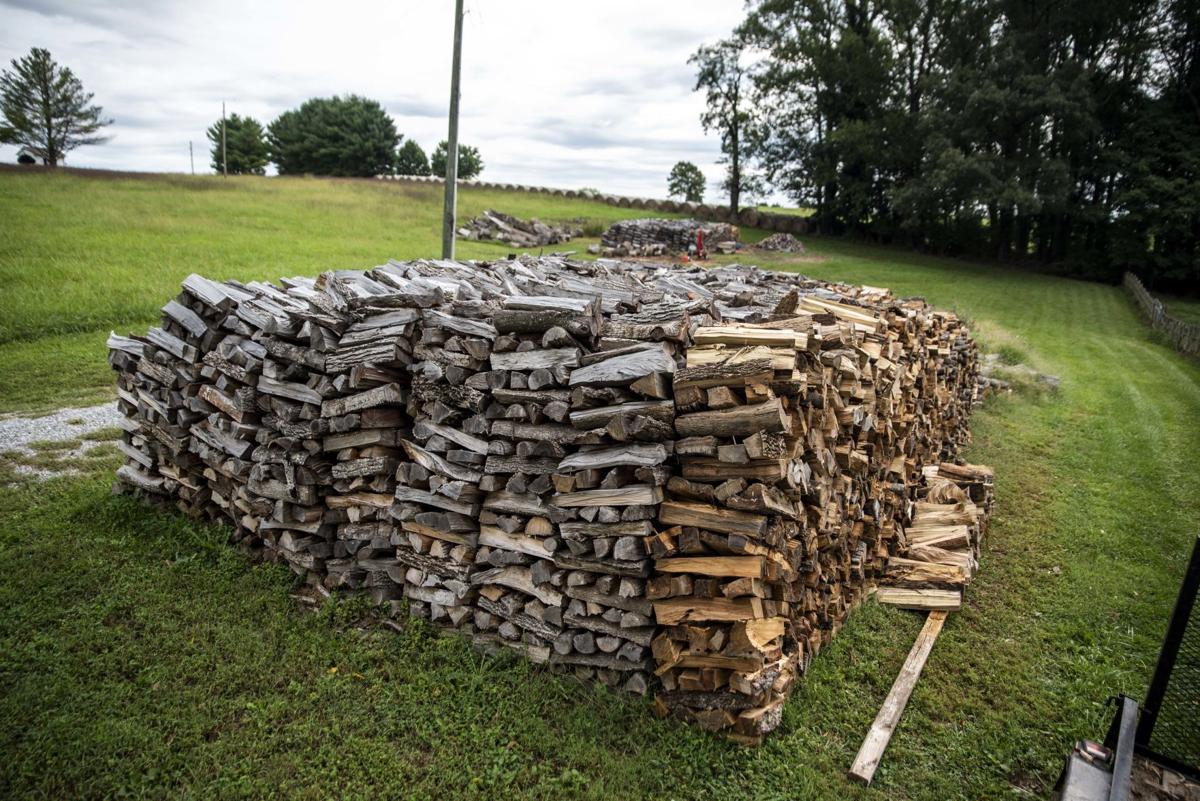 Piles of wood for wood ministry with Main Street United Methodist Church sit in a field in Bedford on Monday, Sept. 14, 2020.

Aministry in Bedford providing free firewood to qualifying individuals anticipates fuel needs will be more urgent this winter because of the coronavirus pandemic’s economic effects.

“With the COVID-19 virus, we’re thinking we’re really going to get hit hard this year, because a lot of people are out of jobs, or have been laid off because of cutbacks. A lot of the rental properties have been delayed on people having to pay their rent for two, three, four months, then all of a sudden this fall, everything is going to start coming due,” said Roger Layne, of Bedford, a founder of the wood ministry that launched in 2001.

The idea for the wood ministry was inspired in the mid-1980’s, when Layne participated in the Society of St. Andrew apple gleaning at Johnson’s Apple Orchard, where volunteers gathered salvageable fallen apples to donate to local food banks. Layne noticed wood from apple trees scattered around the property and was struck with an idea.

“I asked [Danny Johnson], would he donate it if I was to come up there and haul it out of his orchard and use it for firewood for some of our congregation members if they needed it to keep warm. That way they could save some money to buy extra food, pay the electric bills, rent, things like that,” Layne said.

Johnson agreed, and Layne and his wife gleaned wood in the orchard shortly after.

Layne mentioned the fuel donation idea to the outreach committee at Main Street United Methodist Church in Bedford, where he is a member. The mission caught on immediately.

Volunteers gather, chop, stack and deliver firewood that will be given to qualifying individuals in need of fuel for wood heat in Bedford County, entirely free of charge. The hope, Layne said, is to allow clients to save fuel money for other necessities

The foundation of the wood ministry rests on James 2:14-16 in the Bible, Layne said. The passage emphasizes the need to put faith into action.

“What good is it, my brothers, if a man claims to have faith but has no deeds? Can such faith save him? Suppose a brother or sister is without clothes and daily food. If one of you says to him, ‘Go, I wish you well; keep warm and well fed,’ but does nothing about his physical needs, what good is it?”

“That’s what stuck in my head,” Layne said. “People say, ‘go in peace, be well fed’ but don’t do anything about it.”

The operation is year-round. Volunteer levels fluctuate, with “a handful” working consistently this summer, but Layne said there usually are between 60 and 100 volunteers who come and go throughout the year.

During summer months, volunteers work in the mornings before the heat of the day. Delivery runs during the chilly months from October through April. Eight or nine delivery volunteers haul supplies of wood to clients throughout Bedford County.

Clients are referred to the ministry through Bedford Christian Ministries, Smith Mountain Lake Ministries and the Bedford County Department of Social Services.

“A lot of our families are on fixed incomes, retired people. Or they might be a single-parent family with kids, having a hard time making ends meet,” Layne said.

The ministry’s wood supply comes entirely from donations. Individuals with downed trees or scrap wood on their property contact Layne offering to give their wood. Several Bedford-area tree services donate unsellable wood, Layne said. Wood is kept at the ministry’s wood yard on Old County Road in Bedford. The property is owned by Bobby Wells, who helped start the ministry.

Layne said this arrangement is mutually beneficial for volunteers and donors. The ministry maintains a consistent supply of firewood, and donors have their property cleared, or have unsellable wood taken off their hands without having to dump it in a landfill and waste it.

Having a plentiful wood supply was not always the case, Layne said. There was a time when the ministry was in jeopardy.

“We were running out of wood,” Layne said. As the ministry team prayed for a way to find more wood and continue their mission, Layne said God answered their petition in the form of a weather phenomenon.

“The good Lord sent a derecho through here,” Layne said, referring to the damaging 2012 summer windstorm that swept through Virginia. “Since then, we have had all kinds of wood loaded up.”

Firewood sits on site for a full year to cure before being delivered for fuel, Layne said. The curing process reduces residue like sap that may be deposited in chimneys when burned, increasing the risk of chimney and house fires, he explained.

What began as a single-church ministry has grown into a community service program over the 19 years of operation. Volunteers from several different Bedford-area churches, as well as a number of retirees, local professionals and area residents pitch in with the goal of helping those in need.

The ministry has received calls from Roanoke and Salem, to Campbell County, Lynchburg and Danville asking for wood delivery, Layne said, but the team must limit its service area to Bedford County, primarily due to resources.

“We call it a ministry, because we don’t get paid for it,” Layne said. Time, labor, and gas money all come out of volunteers’ pockets, and wood is never sold for profit.

“We want to be a congregation that is serving the community,” Compton said. “It is a blessing to be a pastor at a church that is trying to think outside the box and be God’s light for the community.”

Susan Layne carries a log to be split for wood ministry with Main Street United Methodist Church in Bedford on Monday, Sept. 14, 2020.

Updegraff cuts a log down to size to be split into usable pieces. Clients are referred to the ministry through Bedford Christian Ministries, Smith Mountain Lake Ministries and the Bedford County Department of Social Services.

Susan Layne watches as her husband Robert Layne starts up the wood splitter to cut logs for wood ministry with Main Street United Methodist Church in Bedford on Monday, Sept. 14, 2020.

Piles of wood for wood ministry with Main Street United Methodist Church sit in a field in Bedford on Monday, Sept. 14, 2020.