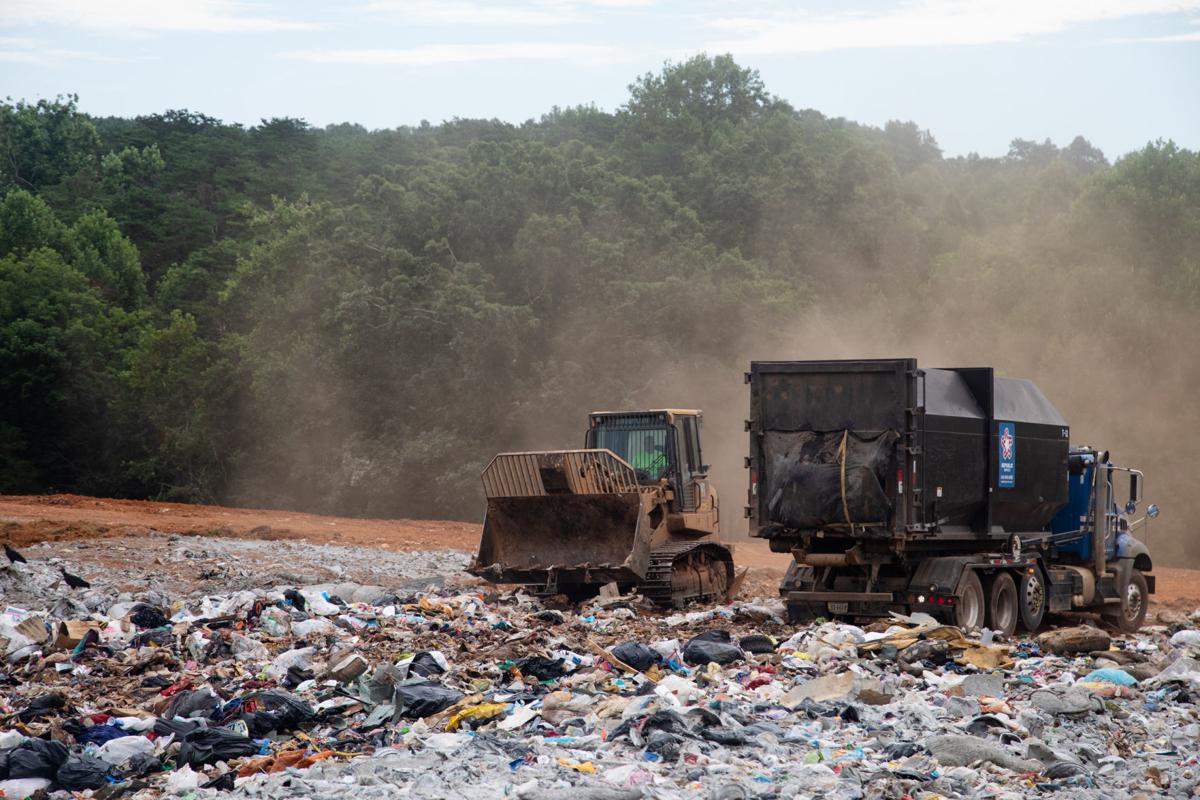 Employees prepare to dump and plow trash onto the landfill on Monday, July 22, 2019 at Bedford County Landfill. 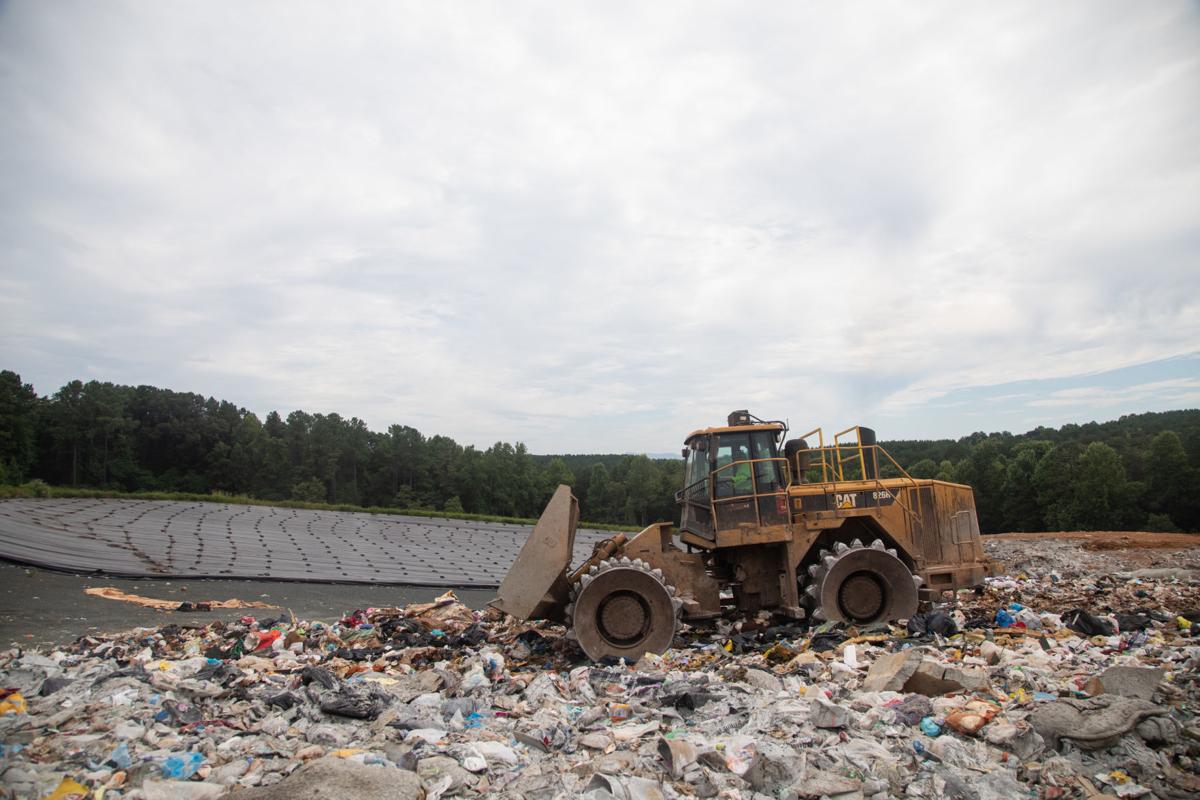 Employee Darryl Johnson plows through piles of trash earlier this year at the Bedford County Landfill. The landfill currently receives about 55,000 tons of solid waste annually.

With major changes on the horizon — like new transfer stations coming to Appomattox, Amherst and Bedford counties, the Campbell County landfill nearing capacity and a mega-landfill slated for Cumberland County — the local waste management landscape is shifting rapidly.

With an influx of transfer stations, and movement away from reliance on small community landfills — like the Amherst County landfill in Madison Heights — counties and private haulers are trying to figure out how they will manage solid waste for the next 50 years.

“Every decision we are making in solid waste, it’s a generational decision,” Bedford County Administrator Robert Hiss said. In Bedford, officials only recently learned the county landfill would reach full capacity in about a year, about six years earlier than anticipated.

The Bedford County Landfill currently receives about 55,000 tons of solid waste, annually. If the county wants to stay in the landfill business, Hiss said, that’s a decision it has to make now.

“If you look at it historically, [waste disposal is] a core service that local government has provided,” Hiss said. “And now, in soon to be 2020, what’s the best way to provide that service?”

“Is it small landfills in all these counties? We have to ask if that is the best model or not — just because it used to be 50 years ago, doesn’t mean it has to be today.”

Bedford County now is planning on a $2.7 million expansion and renovation of the Bedford County Transfer Station, with a goal of having the facility open in late summer of 2020. Bedford has yet to determine where trash from the transfer station will go and is in discussions with Pittsylvania County about potentially hauling to its landfill.

“There is nothing worse than our situation now, where you have something happening that is out of your control. Especially something as important as disposing of solid waste without a backup plan,” Hiss said.

With three options to consider — be it permanently transferring waste, opening another landfill cell or a combination of both — Bedford County is facing critical decisions to determine the future of the county’s solid waste.

“Transfer stations can be a long-term solution,” Hiss said. He said they are building it to last for the next 20 to 30 years.

Like Bedford County, Amherst looked at multiple long-term solutions — such as opening a new cell, transferring waste to a public landfill or hauling waste to a private facility.

In Appomattox County, County Waste of Virginia, the largest hauler in the greater Lynchburg area, hopes to begin construction on the Appomattox transfer station in spring or summer of 2020, and be up and running by the fall.

The transfer station is expected to generate more than $200,000 in annual revenue for Appomattox County.

Jerry Cifor, senior vice president of County Waste, called the transfer station a “proactive solution” for the county. Though Appomattox County currently is a member of the Region 2000 Services Authority which manages a large regional landfill — made up of Campbell, Appomattox and Nelson counties, and the city of Lynchburg — Cifor said that Region 2000 may not be a viable 20-year solution.

Approved in February by the Appomattox Board of Supervisors despite the outcry of many Concord-area residents, the transfer station plans to haul waste to the Cumberland County landfill pending its construction.

While landfills often generate resident push back, Cifor said the protests that met the Appomattox transfer station were an anomaly, as transfer stations are less invasive, and will not have trash sitting in the facility overnight. He added that transfer stations are the long-term solution for many localities, and are built with the capacity to serve their communities for the next 40 to 50 years.

Campbell County is all too familiar with the push back against landfills and also now is considering transfer stations. The Livestock Road Regional Landfill in Campbell County, overseen by the Region 2000 Service Authority, has an estimated lifespan of about 10 to 12 more years, according to Authority Director Clarke Gibson. By 2030, they must have established a long-term solution for the authority’s waste.

Region 2000 Executive Director Gary Christie said the authority is one of the largest public waste operations in the state. The authority sees about 200,000 tons of solid waste annually, with the majority of {span}member jurisdiction waste coming from Lynchburg and Campbell County.

With the landfill capacity end date approaching, authority staff and board members have spent the last several years exploring possible options for the region’s solid waste disposal through 2050.

Gibson said a report they created in 2017, “Solid Waste Management 2030,” found expansion to be the most beneficial option. However, that currently is off the table.

In November 2018, Campbell County supervisors voted to oppose any expansion to the Livestock Road landfill, a decision that blocks a previously presented expansion plan onto a neighboring property, referred to as the Bennett property.

Campbell County Rustburg District Supervisor Jon Hardie is among the board members in staunch opposition to any expansion of the landfill. Hardie lives within half a mile of the Livestock Road landfill, and has been fighting against the landfill, and often Region 2000, since 2014. Issues with the landfill, from invasive odors to the proposed expansion onto the Bennett property, are a large part of the reason he ran for the board of supervisors.

Hardie said he has seen people literally sell their property for fear of the landfill’s effects and the threat of plummeting property values. Some nights, when the landfill gas was at its worst, it would wake him up, the odor so bad he could taste it, he said.

Things were at their worst in around 2016, when Hardie and Clayton Stanley appealed to the General Assembly to adopt legislation carried by Del. Matt Fariss, R-Campbell County, requiring facilities, such as the Region 2000 Service Authority Landfill near their homes, to install gas-consuming equipment.

“This is not political, this is not anything else for me,” Hardie said. “This is real life.”

After the appeal, Region 2000 put in place gas collection and control system.

“But it had to get to that level,” Hardie said. “This is not a game. It had to go that far before they were willing to make changes, and I won’t ever forget that.”

This leaves the authority with the option of pursuing a transfer station. The projected cost of service for a transfer site is $62 per ton for members, nearly double the current rate of $30.25 per ton.

Despite potential increases in costs, Hardie said in the future, he hopes to begin transferring the county waste, potentially turning toward the private sector.

“There’s always going to be a market rate, there is always going to be a cost to this. And it’s either paid to the private sector, or it’s paid by the taxpayer. Until we’ve minimized waste, we’ve got to pay,” Hardie said. “Campbell County has to invest in a positive future, this has been nothing but negative for our community and for our citizens.”

For localities like Amherst County, transfer stations are not only more economically viable, but circumvent the long-term commitment of opening another landfill cell.

“Once you commit to a cell, then you’re in the landfill business for another 30 years,” Rodgers said.

Not to mention day-to-day operations and the money that will be spent to eventually close the facility.

“We’ve closed a landfill or two,” Rodgers said. “And we are still monitoring them, still paying people to analyze it. It’s a frightening thing to have that level of responsibility for a resource that does have a limited life. Eventually you will fill it up, and you will still be on the hook for caring for something that you can’t use anymore.”

Not to mention, landfills require an extensive permitting process and environmental regulation.

“In the past, there were no rules, no permitting. You found a gully and filled it up, and that was it,” Rodgers said. “Now it is so costly to operate a landfill and to find people to maintain the equipment and meet the standards, that really only those operations that are large enough to achieve economies of scale can make it profitable.”

This is one reason that counties are moving away from small community operations and toward regional partnerships or large, privately owned facilities.

Take County Waste of Virginia, whose plans to construct the Green Ridge Recycling and Disposal Facility — a 1,200 acre landfill in Cumberland County, with about 500 acres of waste disposal area and up to 5,000 tons of solid waste daily — could shake up the operations of surrounding municipalities.

In the greater Lynchburg market, County Waste hauls about 250 tons of solid waste per day from about 38,000 residential accounts and 2,500 commercial accounts.

Like Rodgers, Cifor said it is much cheaper to operate a landfill on a larger scale.

“The larger the landfill, the lower the cost per ton to operate,” Cifor said.

Gibson concurred that the trend to have fewer and larger landfills largely is an economic decision, with the small county and town landfills created in the 70s and 80s rapidly disappearing. This is one thing that encouraged Region 2000 to form the authority more than ten years ago — through the aggregation of regional trash, they can maintain low tipping fees for members.

In the near future, Gibson said they have to start the planning process, particularly with the Cumberland County landfill and Appomattox County transfer station on the horizon — which could ultimately change the tonnage of waste coming into the regional landfill.

Employees prepare to dump and plow trash onto the landfill on Monday, July 22, 2019 at Bedford County Landfill.

Employee Darryl Johnson plows through piles of trash earlier this year at the Bedford County Landfill. The landfill currently receives about 55,000 tons of solid waste annually.