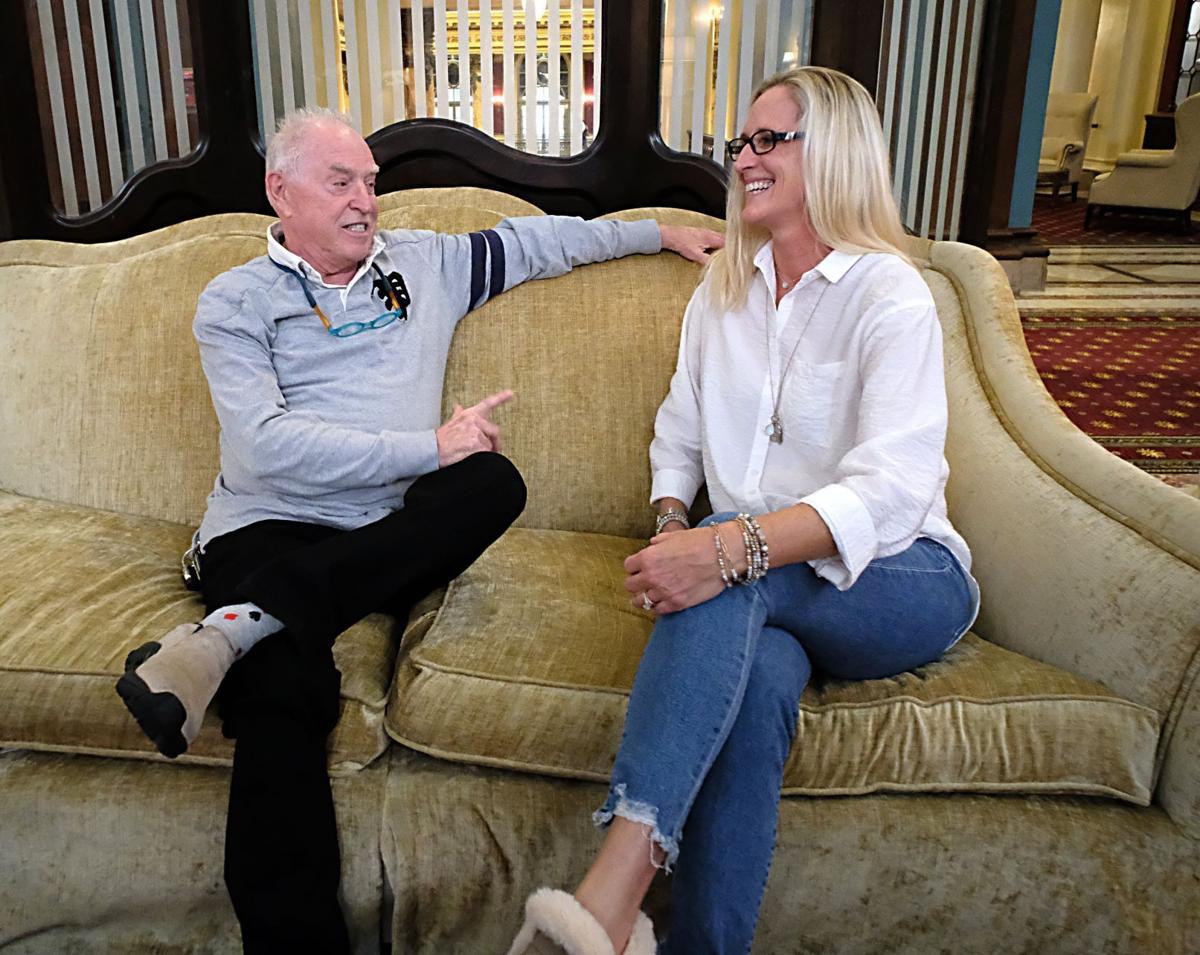 Bill Beville, 82, of Richmond talked with his daughter, Adrienne Evin, 51, of Boston in the lobby of The Jefferson Hotel in Richmond last month. Evin was able to locate Beville through DNA testing. 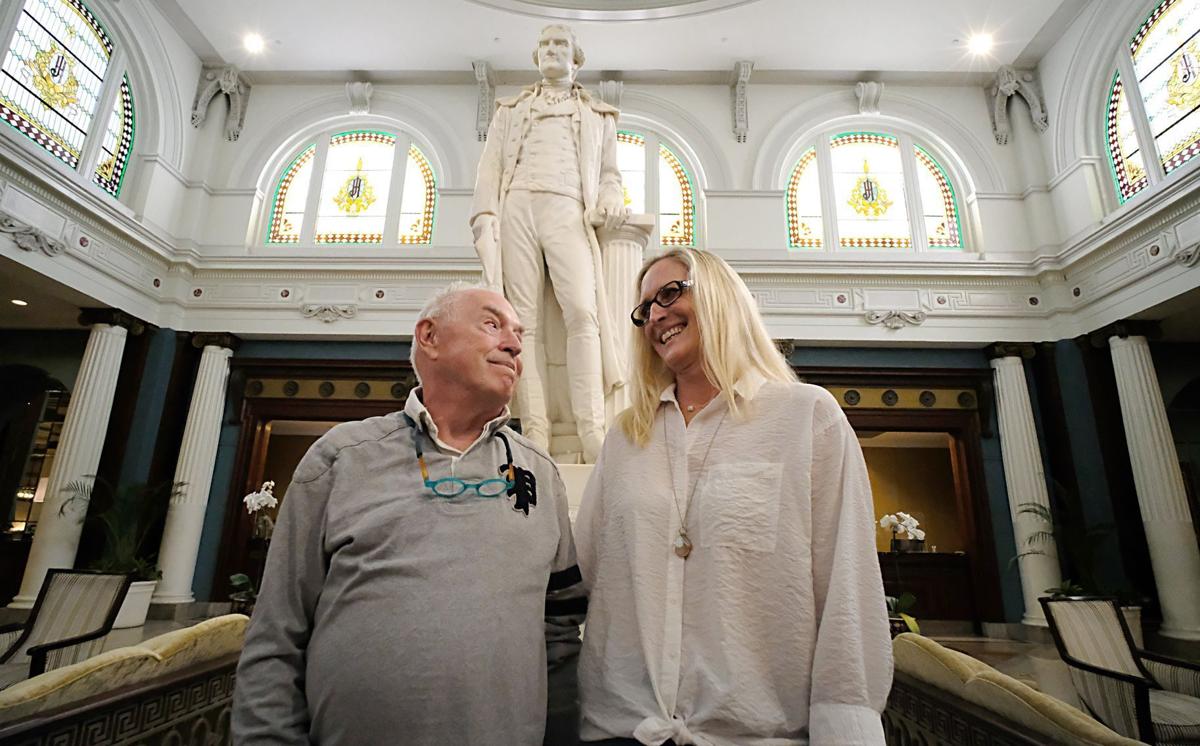 Bill Beville, 82, met his daughter Adrienne Evin, 51, of Boston for the first time in October in the lobby of The Jefferson Hotel in Richmond. Evin located Beville through DNA testing and he invited her to Richmond to meet in person.

Adrienne Evin stepped off the hotel elevator filled with anticipation and at least a little apprehension, her eyes searching the lobby for a man she knew only through text messages, a couple of phone calls and a few photographs.

She spied Bill Beville at the same time Beville, feeling more than a little nervous himself, laid eyes for the first time on the daughter he learned about only a few months ago. As she emerged from the elevator, Beville saw his mother’s smile on her face and thought to himself, “She’s one of us.” Any anxiety melted away.

He had wondered ever since the meeting was arranged weeks ago what his first words should be to his new, 51-year-old daughter, but had come to the conclusion that “you just can’t rehearse for this kind of thing.”

And so those first words, unscripted but formed by the moment, tumbled easily from Beville as he approached Evin: “Welcome to the family.”

The words, Evin said later, “took my breath away.”

What next? Before they met, given the extraordinary nature of the meeting, not to mention COVID-19, Evin wasn’t sure: “Do I shake his hand? Do I hug him?”

In those first seconds, though, all doubt disappeared, and they embraced in a hug.

“It just seemed automatic,” she said.

Of the immediate bonding, said Beville, “I just wish this would have happened 51 years ago.”

A series of DNA tests brought together Beville, who lives in Richmond, and Evin, who resides outside of Boston.

Beville’s granddaughter, Allison Jeter, a college student, submitted a DNA test to 23andMe some time ago, curious about her family history. She received the results and then didn’t look at the website again for a long time. Then last December, she checked her 23andMe account and there was a message from Evin whose DNA indicated she was related to Jeter, perhaps as an aunt. Evin explained she was searching for the paternal side of her family and that she also had been linked to a man who was categorized as “close family,” perhaps an uncle — Beville’s brother and Jeter’s great-uncle — through Ancestry.com, but that the man had not responded to a message.

“From the start, I knew there was something,” Jeter said.

She told her uncle and grandfather, both of whom were skeptical and downplayed the possibility of a long-lost relative. They told her to be careful, that it could be a scam.

But Jeter was convinced there was nothing sketchy about it. Jeter and Evin continued their conversation through Facebook, and once Jeter saw Evin’s photo she thought, “She’s definitely related to us.”

Jeter encouraged her grandfather to talk to Evin. Eventually, he relented and called her last spring.

During the call, Evin told him her story: She had been adopted at birth. In the 1990s, curious about her origins and with the support of her adoptive parents, Evin was able to gain access to her birth records in Massachusetts. She learned the name of her birth mother, but she never met her as the woman, no longer living in Massachusetts, declined to meet with her, which Evin said was disappointing but understandable.

“I never wanted to overstep my bounds,” she said.

However, Evin was able to find her biological mother’s sisters — her aunts — with whom she has become close. Through them she learned her birth mother had become pregnant after a trip to Florida in 1969. The family kept the pregnancy quiet, and arrangements were made before the baby was born for a couple to adopt the child.

No one could provide any information on her biological father, and she had absolutely no leads — until DNA testing became available.

Which eventually brought her to her phone call with Beville.

He remained skeptical, but in her heart, Evin knew Beville was her biological father.

“Even if it didn’t go any further, that’s OK,” she said. “I always describe my life as a puzzle, and this is just one more piece.”

At first, Beville couldn’t even remember being in Florida in 1969, but as he dug through his memory and talked to friends it became clear that he did indeed recall a trip to Daytona Beach that spring. However, more than 52 years later, he has no memory of Evin’s biological mother, or even such an encounter, though a DNA test he took over the summer proved his paternity. He called Evin in August to give her the news. The phone call lasted three hours.

Beville, who also has a son, invited Evin to Richmond. They arranged to meet at The Jefferson Hotel the last week of October.

In the span of a few months, Beville went from incredulity to “embracing” the situation, though with a dose of hesitation before their meeting.

“I was somewhat nervous,” he said. “I spent 40 years of my life being a college textbook sales rep [and adviser] calling on faculty at universities, so every time you knock on a door there’s a little bit of ‘I hope this goes OK.’

“I had some anxiety because I wanted this to be a good experience for her. This was her story and her journey. I came late into this story; her journey was to find me.”

He acknowledged being “blindsided” by it all at first, but, “It is what it is, and let’s see if I can make this work. I didn’t want to bungle it in the first few moments.”

As it turned out, their meeting was “fantastic,” Beville said later.

Evin, reached at her home in Massachusetts last week, said the same.

They met for lunch, then Beville gave Evin and her husband, Kerim, a tour of the Fan District. They wound up at his house in South Richmond where they spent the afternoon talking and looking at family photos. They returned to The Jefferson for dinner where they were joined by Beville’s granddaughter, Allison, and Beville’s girlfriend. Evin and her husband returned to Massachusetts the next day so they could help the youngest of their four children, also named Allison (and also a soccer player, just like Beville’s granddaughter), complete her college applications before the deadline.

“Gratitude” is a word Evin, a pharmacist by training, uses freely to describe how her search has played out. She is grateful, of course, for advancements in DNA testing that made this all possible, but also because, after all these years, Beville was still around and he wanted to meet her.

Beville and Evin look forward to continuing their newfound relationship. A visit to Boston is in Beville’s future so he can meet the rest of Evin’s family, who eagerly anticipate meeting him, as well.

The puzzle, as Evin described her life, is now revealing a fuller picture.

None of this, she said, would have been possible without the support of her adoptive parents, who never hid from her the fact she was adopted. When it came time to meet her biological aunts years ago, Evin’s mother went along because she wanted to express her gratitude to the family for taking the path of adoption, allowing her to become a mother with a daughter. When they arrived for the meeting with the aunts, Evin, then 24, suddenly froze with fear.

“I can’t get out of the car,” she told her mother, who replied that she’d go in alone. “I’m going to thank them,” Evin recalls her mother saying as she exited the car. Not wanting to be left sitting there alone, Evin figured she better go in, too.

“I have a wonderful family,” Evin said.

As for her yearslong search for Beville, she said, “It wasn’t like I was ever missing something. But when I dug deep inside and started to think about being an adoptee, even though you can have such a strong network of family, there’s always that little bit of feeling of rejection or abandonment. I never really thought about it until I started thinking about it because it wasn’t something that ever brought me down. It’s just kind of there.

“Meeting Bill … really filled a void I didn’t even think was there. I actually felt like … I found my people. Then when I met his granddaughter, my niece Allison, we just clicked right away. It was like, this is where I came from. Not a replacement or anything for my family because I have my mom and dad and we’re close. It’s another piece to the puzzle.”

Bill Beville, 82, of Richmond talked with his daughter, Adrienne Evin, 51, of Boston in the lobby of The Jefferson Hotel in Richmond last month. Evin was able to locate Beville through DNA testing.

Bill Beville, 82, met his daughter Adrienne Evin, 51, of Boston for the first time in October in the lobby of The Jefferson Hotel in Richmond. Evin located Beville through DNA testing and he invited her to Richmond to meet in person.