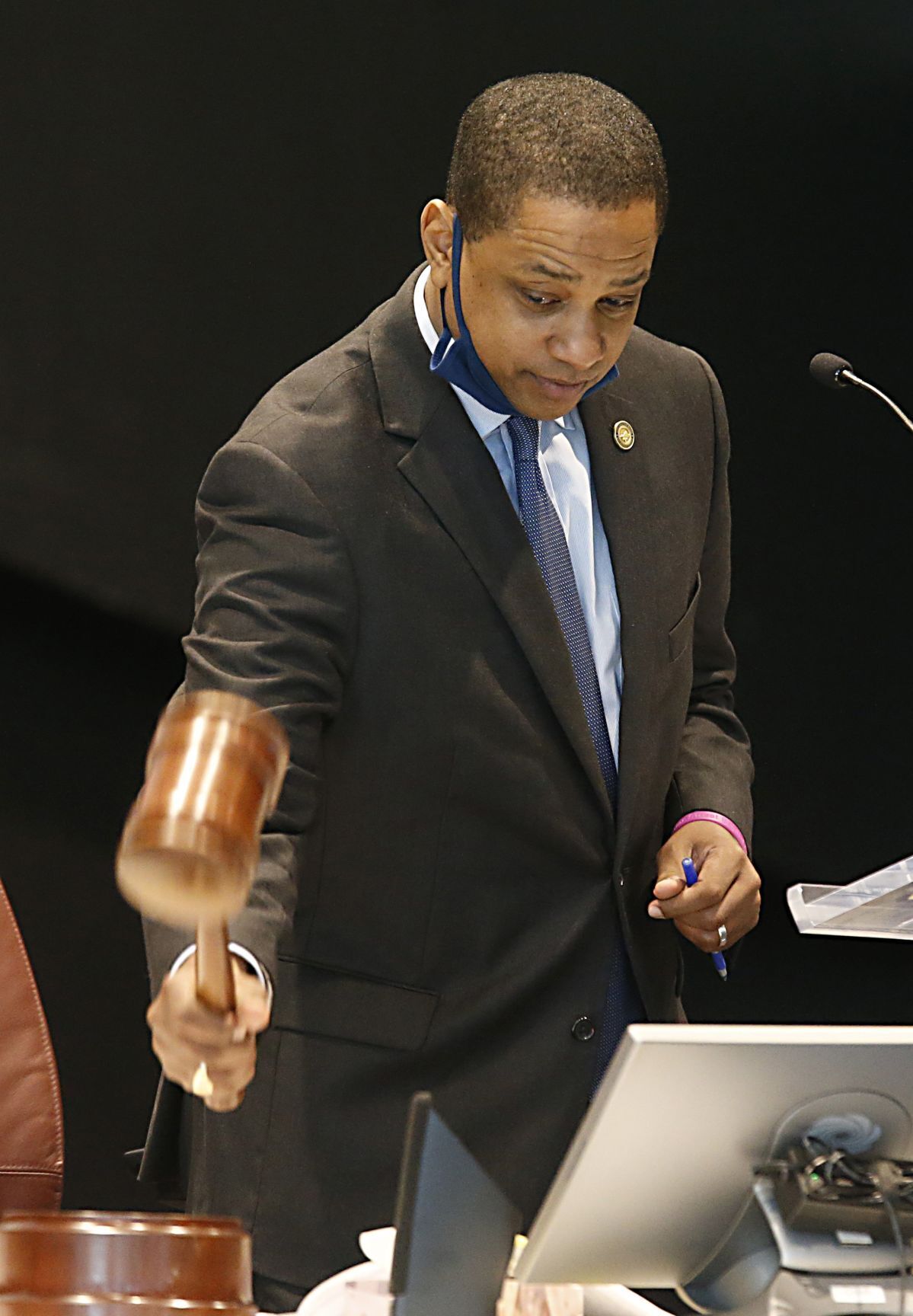 Lt. Gov. Justin Fairfax broke a 20-20 tie in the Senate on amendments to the marijuana legislation. Adults will now be allowed to possess small amounts of marijuana as of July 1.

Virginia State Sen. Janet Howell, D-Fairfax, smiles after her remarks on a bill legalizing marijuana during the Senate reconvene session at the Science Museum of Virginia in Richmond on Wednesday.

RICHMOND—Virginia will legalize possession of small amounts of recreational marijuana for adults this summer, an accelerated timeline meant to curb the disparate effect of prohibition on people of color in a Southern state remade by its Democratic legislative majority.

The General Assembly on Wednesday backed a proposal from Gov. Ralph Northam to allow Virginians older than the age of 21 to possess up to an ounce of marijuana and grow up to four cannabis plants at home starting July 1. Legalization will come with immediate spending on police training and public education, but without a legal marijuana market, which remains years away.

Virginia joins nearly 20 other states that have voted to legalize recreational marijuana, and will forever be the first state in the South to do so. Sales and public consumption will remain illegal for the time being.

Democrats in Virginia hailed the legalization of marijuana as a step toward racial equity after the decades-long “war on drugs,” which saw Black Virginians disproportionately harmed by disparate enforcement. Even after Virginia decriminalized marijuana last year, and studies showed that different racial groups use marijuana at similar rates, Black people in the state continued to face penalties for recreational marijuana use at higher rates.

This is the appeal many Black lawmakers and civil rights advocates made to a majority-white, Democrat-controlled legislature, and to the state’s governor, who vowed in 2019 after disclosure of a racist photo on his medical school yearbook page to dedicate the rest of his time in office to addressing racial inequities in the state.

The governor’s amendments to the measure cleared the House in a 53-44 vote, and the Senate in a 21-20 vote, with Lt. Gov. Justin Fairfax casting the tie-breaking vote.

Along with an accelerated legalization timeline, the state will move to expunge and seal criminal records related to marijuana, and to adjust sentences for marijuana crimes through the courts system.

Democrats also have promised to let equity guide the creation of the new legal market, but lawmakers punted until next year key decisions on how to set up the legal market. Thorny debates about how to create and dole out licenses, and intense lobbying, created major rifts among lawmakers they could not resolve.

Republican opposition was unanimous, wide-ranging and heated. On the House and Senate floors, they argued the bill was incomplete and would open Virginia up to harm by making roads less safe and by encouraging use among youth.

Sen. Mark Obenshain, R-Rockingham, said the legislature was “putting the cart before the horse,” in its approach to legalization.

“I think it’s a bad idea to do this that quickly,” Obenshain said. “It is clear that we are unprepared to address the issues particularly that are going to relate to children, teenagers, adolescents, and the impact of immediate legalization for them.”

Obenshain acknowledged the $1 million budgeted by Northam to pay for a public education campaign that includes youth, but said it was not enough.

Republicans also took issue with a labor provision the Northam administration added to the bill: the new Cannabis Control Authority would have the power to remove a company’s business license if it interfered with union organizing, paid employees less than legally required or classified more than 10% of its workers as independent contractors.

The measure would require the legislature to reconsider this aspect and certain other parts of the bill again next year.

Per the outline in the bill passed Wednesday, once marijuana sales kick off in January 2024, people would be allowed to possess up to an ounce. Anyone found with more than an ounce or less than a pound would face a $25 civil penalty. Possession of more than a pound would constitute a felony.

People would be allowed to share an ounce of marijuana or less with other people, as long as there is no exchange of money or goods.

People younger than the age of 21 would face a $25 civil penalty for possession of any marijuana, and undergo treatment and education.

As for the legal market, the state will create a new agency that will issue regulations. That work will start this summer.

“The time has come for our state to legalize marijuana. The amendments ensure that while we’re doing the complicated work of standing up a commercial market, we aren’t delaying immediate reforms that will make our Commonwealth more equitable for all Virginians.”

On the eve of the anniversary of the worst mass shooting in Virginia history, Sens. Tim Kaine and Mark Warner, both Virginia Democrats, are asking Congress to follow the state's lead in enacting restrictions on purchase and use of firearms.

William & Mary mistakenly tells 350 applicants they had been accepted

William & Mary accidentally sent an email to 350 applicants who had been denied or waitlisted congratulating them on their acceptance.

The pageant left three years ago for Liberty University in Lynchburg, which hosted it for two years. It was canceled last year, due to COVID-19. Miss Virginia had spent its first 54 years in Roanoke before pageant officials, through a third party, notified the city that it was leaving.

MANTEO, N.C. — One person was killed after a portion of an old bridge on the North Carolina Outer Banks collapsed and fell into the water, aut…

Virginia has paused use of the Johnson & Johnson COVID-19 vaccine while federal agencies investigate to determine whether it caused rare blood clots in six women, one of whom died.

As Virginia's COVID cases and hospitalizations rise, some health officials fear another surge

Virginia is administering vaccines at record levels, more than tripling the daily average of shots given three months ago when the state was weathering the worst of the pandemic.

Culpeper tree worker dies in fall while on job in Springfield

Mauro Cruz Cortes, 45, died when limb broke and he fell more than 40 feet.

One of two police officers accused of pepper-spraying and pointing their guns at a Black Army officer during a traffic stop has since been fired, a Virginia town announced late Sunday, hours after the governor called for an independent investigation into the case.

Danville to get nearly $1 million to fight homelessness, part of federal stimulus package

Nearly $1 million in federal funding is coming to Danville to combat homelessness in the city.

Lt. Gov. Justin Fairfax broke a 20-20 tie in the Senate on amendments to the marijuana legislation. Adults will now be allowed to possess small amounts of marijuana as of July 1.

Virginia State Sen. Janet Howell, D-Fairfax, smiles after her remarks on a bill legalizing marijuana during the Senate reconvene session at the Science Museum of Virginia in Richmond on Wednesday.