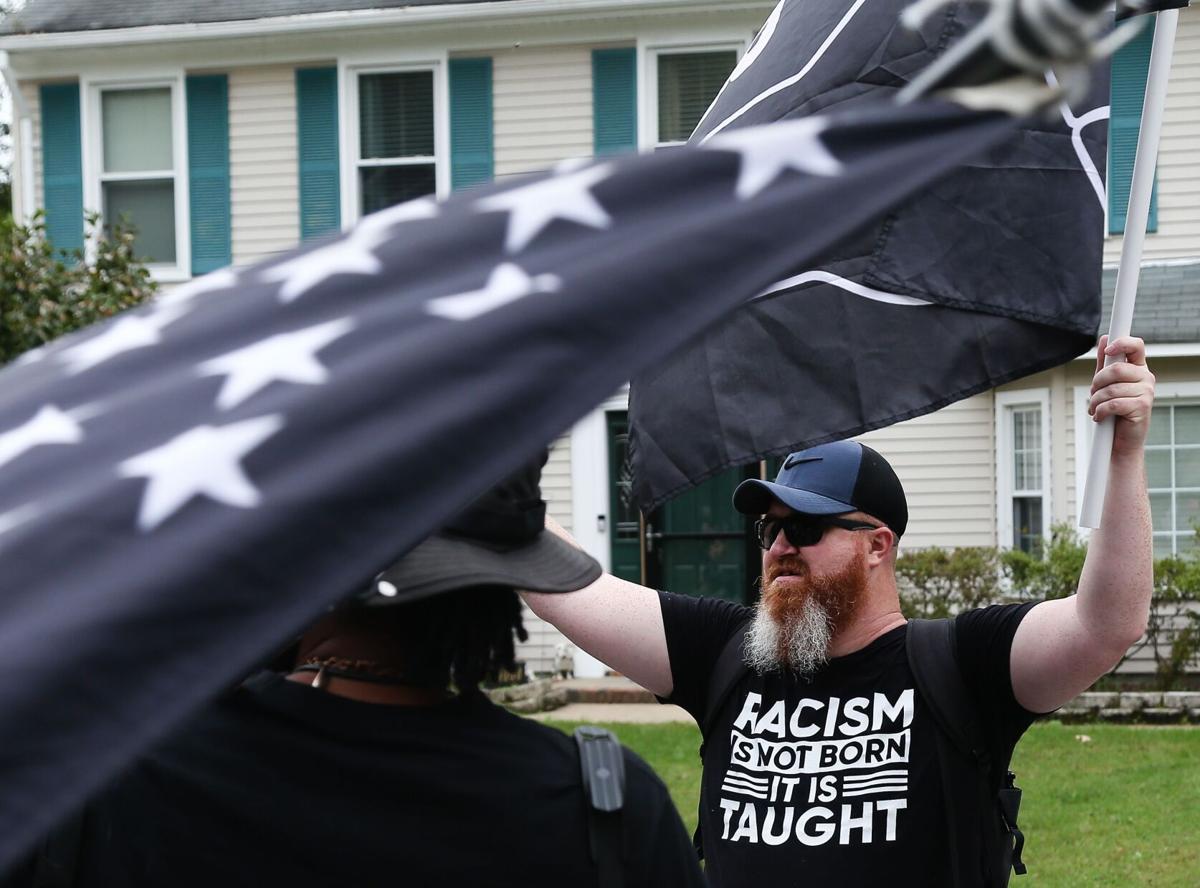 Russell Tee speaks at a protest in the Salem Lakes neighborhood of Virginia Beach on Saturday in response to a neighbor allegedly playing racist sounds and music towards the next-door family of Jannique Martinez. 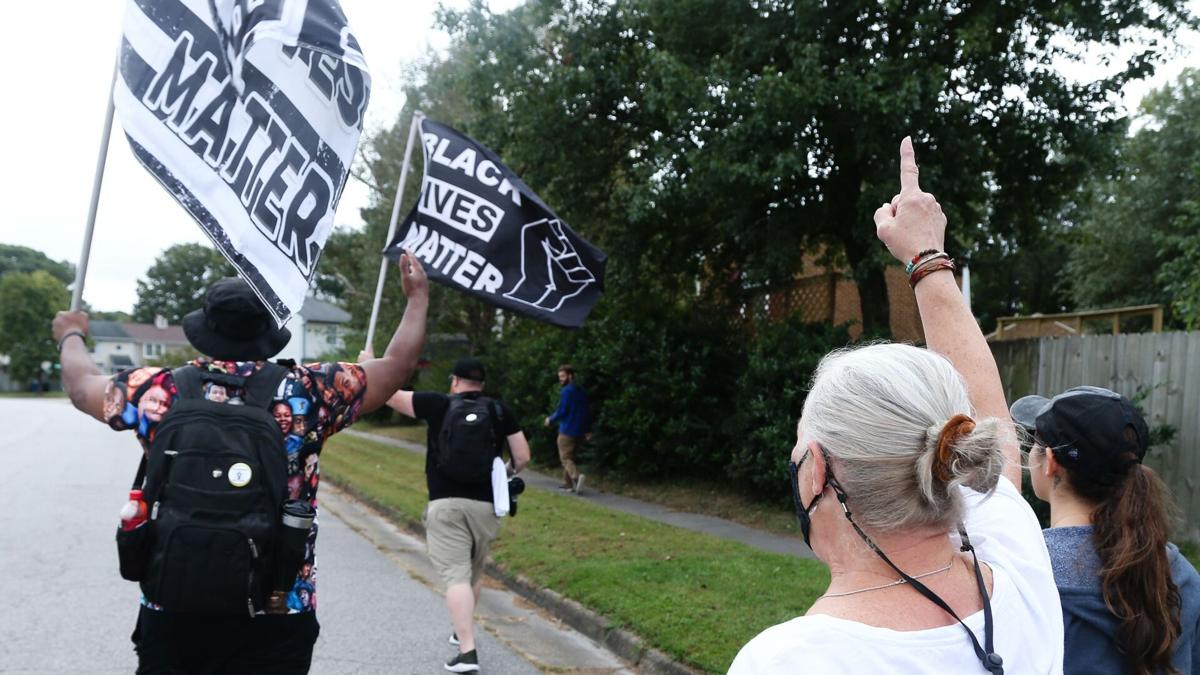 Protesters march through the Salem Lakes neighborhood of Virginia Beach on Saturday in response to a neighbor allegedly playing racist sounds and music toward the next-door family of Jannique Martinez.

Activists rallied Saturday morning in Virginia Beach to support a Black family taunted by its next-door neighbor with offensive loud noises and other “racist stuff” since 2017.

The peaceful march, organized by Russell Tee who lives outside of Richmond, was a show of community solidarity in the sleepy Salem Lakes neighborhood the Martinez family has called home for nearly five years.

The march drew a couple dozen neighbors and family friends who gathered at 10 a.m. at a Food Lion less than a mile from the Martinez’s home. The group walked — joined by members of Black Lives Matter 757 — and held flags with the BLM757 logo and other signs. They chanted “Racists will not be tolerated,” and “Black Lives Matter.”

“The power is always with the people. We the people, we show up. This is not violence,” said Tee, 38, who made a 2 ½-hour drive to Virginia Beach to lead the rally. “This is peace, love and harmony as a community. Love has to conquer hate.”

“People just need somebody to stand with them,” said Debbie Pratsis, a Virginia Beach resident who doesn’t know the family but came after hearing the news reports.

“It’s quieter. It’s good to know the community is coming together,” Jannique Martinez said in a phone interview before the march. “They (police) are still investigating. My anxiety is high (still) even though we have good support. I am constantly worried about my safety and my kids’ safety.”

Martinez attended the rally, but the rest of her family — husband Joel and three children ages 7, 12 and 20 — did not.

Tee, who is white and self-employed as a financial analyst, goes around the country organizing social injustice rallies to take a stand against racial inequity, he said.

“If we don’t take that emotion and energy into the city councils and the halls of Congress, (racism) won’t change,” he said. “We have to tear the system down.”

Martinez says the family for years has dealt with the harassment, loud music and other “racist stuff” — slurs and screeching monkey noises — blaring from the home of their next-door neighbor in the 2000 block of Jessamine Court.

In the past two weeks, the incident has drawn the attention of local officials, law enforcement and national media after stories detailing the the Martinez family’s frustration and angst first appeared in The Virginian-Pilot. Tee also posted the story on his Instagram account, which garnered thousands of views. An audio clip captured by a Pilot reporter of the noise and offensive animal sounds also has circulated.

Earlier in the week, Virginia Beach police issued a statement calling the neighbor’s behavior “appalling and offensive.” The department said even with the multiple complaints received, it has no authority to intervene. Officials will monitor the situation. A state housing agency that investigates intimidation and harassment cases also is looking into it.

Martinez said there is a verbal agreement between her next-door neighbor and police to cut the noise, but it’s not enough.

“Make it a law, if he ever bothers anyone, there would be consequences,” Martinez said.

Virginia is partnering with local governments and private operators for an investment up to $2 billion to expand high-speed internet access to more than 250,000 homes and businesses.

An Amish buggy carrying two adults and eight children was struck from behind on a Cumberland County roadway on Sunday causing the death of a woman and the horse pulling the carriage.

The Virginia Beach SPCA received 45 dogs Saturday that were surrendered from an animal hoarding situation on the Eastern Shore. In a Facebook post, the SPCA said there were more than 100 found inside a home on the Eastern Shore. Animal hoarding is defined by the American Society for the Prevention of Cruelty to Animals as “an inability to provide even minimal standards of nutrition, ...

Mike Mitchem said his brother and sister-in-law had not been vaccinated, even though family members urged them to get the shots. “They’d just been leery. They were going off what they’ve been hearing and reading on the internet.”

Virginia Democrats are widely condemning a Republican election rally Wednesday in Henrico County that featured former President Donald Trump and unsubstantiated claims of election fraud, seizing on the event to urge voters to reject the GOP at the ballot.

Russell Tee speaks at a protest in the Salem Lakes neighborhood of Virginia Beach on Saturday in response to a neighbor allegedly playing racist sounds and music towards the next-door family of Jannique Martinez.

Protesters march through the Salem Lakes neighborhood of Virginia Beach on Saturday in response to a neighbor allegedly playing racist sounds and music toward the next-door family of Jannique Martinez.