LGBTQ advocacy group Equality Virginia sent a letter to Gov. Glenn Youngkin and State Superintendent Jillian Balow on Tuesday urging the administration to rescind its proposed policies regarding the treatment of transgender and nonbinary students in light of last week’s mass shooting at a gay nightclub in Colorado Springs, Colo.

The proposed policy released in September would replace policies implemented last year under then-Gov. Ralph Northam that provided increased protections for transgender students. The new proposed policy provides more parental control and would require students to use school bathrooms that match their birth sex, “except to the extent that federal law otherwise requires.” 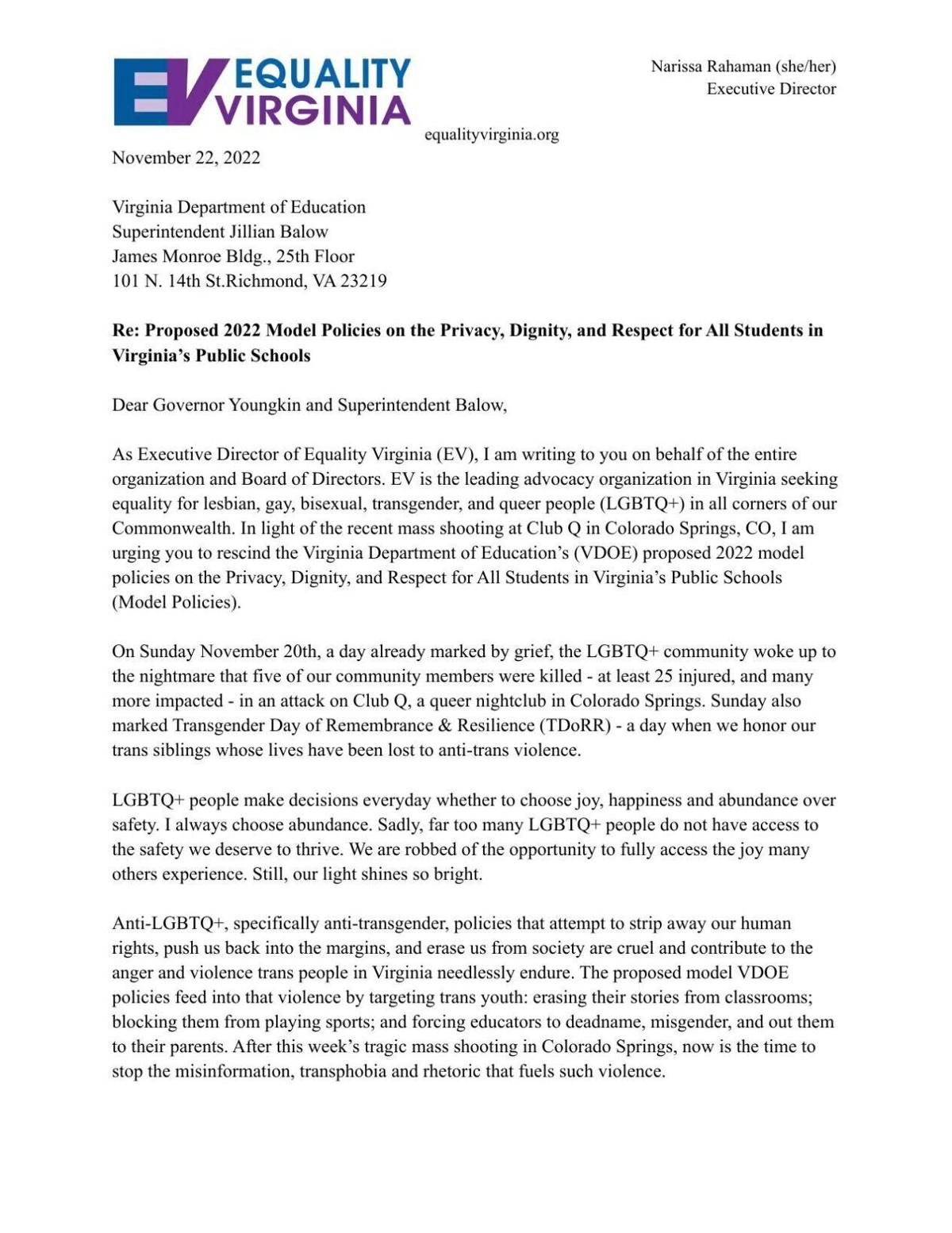 The model policies also would require parental approval of changes to a student’s name, along with any nicknames or changes in pronouns, and require student participation in school athletics and activities to be based on “biological sex.”

“The proposed model [Virginia Department of Education] policies feed into that violence by targeting trans youth: erasing their stories from classrooms; blocking them from playing sports; and forcing educators to deadname, misgender, and out them to their parents,” the letter reads.

“After this week’s tragic mass shooting in Colorado Springs, now is the time to stop the misinformation, transphobia and rhetoric that fuels such violence.”

Macaulay Porter, a spokesperson for Youngkin, said in a statement: “Governor Youngkin is going to continue empowering parents and, as the guidance clearly states, protecting the privacy, dignity and respect of all Virginia students.”

Police say a 22-year-old gunman opened fire with a semiautomatic rifle inside a gay nightclub in Colorado Springs on Saturday. The gunman killed five people and left 25 injured before he was subdued by patrons and arrested by police, authorities said.

“I’m urging you to do the right thing and rescind the proposed VDOE 2022 model policies. The safety of all LGBTQ+ Virginians depends on you doing the right thing,” the letter continues.

“The crisis our transgender and non-binary community is facing is urgent and must be met with urgency. Rescinding the policies now will help save lives.”

Several of the comments brought into play a state law that requires an additional 30-day public comment period for guidance documents accused of being contrary to state law.

The proposed policies could go into effect as soon as Saturday.