MARTINSVILLE — Officials who oversee a struggling state higher-education center in Martinsville met Friday to plan the agency’s future, and lamented the lack of assistance they said they receive from a nonprofit group whose mission is to help them.

New College Institute opened in 2006 with a purpose of helping people in Martinsville and Henry County — one of the poorest areas of the state — earn college degrees and get job training skills. But programming and college instruction at the state-funded center have dwindled to nearly nothing, despite millions of dollars from the state in recent years, a Martinsville Bulletin investigation showed this month.

At the beginning of the retreat, state Sen. Bill Stanley, R-Franklin County, NCI board chairman, said the news report “should motivate us to make some great decisions going forward.”

“I believe that this will be one of our finest hours.”

Here are some of the key issues NCI officials say they’re working on now:

NCI officials spent a lot of time talking about their offshore wind turbine training classes, which last a week. They said the training has the potential to bring revenue to NCI because trainees pay tuition.

Students who fly into the area for the training and stay in Martinsville will soon be able to do the “sea survival” training on water, which NCI officials said they hope will bring more trainees overall. The training is certified through an international organization and is provided at 43 locations in North America, and the “sea survival” class is taught in seven locations.

A contract for NCI to use the yet-to-be-named quarry for that training is under review by the attorney general’s office.

Hubert Harris, a new member of NCI’s board and a former chief of staff at Virginia State University, told NCI staff that the board needs details at future meetings about enrollment numbers and revenue.

NCI has 27 full-time positions, but only 12 of them are filled right now; the board wants to hire a new executive director before filling some jobs. NCI’s board has used an interim director since July 2019 — first Jackson and then Reed, who took on the role in July.

The board went into closed session Friday to talk about hiring a new executive director.

The Bulletin also reported this month that the officials who run NCI say they can’t get questions answered from New College Foundation, a nonprofit whose mission is to support NCI. And, NCI officials say, the foundation isn’t working to find out how it might help NCI or students who might attend classes.

Neither Kevin DeKoninck, the executive director of New College Foundation, nor any member of its board attended Friday’s retreat or a Thursday NCI reception.

Stanley and NCI board vice chairman Richard Hall told the board about myriad problems and disagreements NCI has had with its foundation.

“We all live here — why can’t we just work together?” said Hall, the only member of the board who lives in the Martinsville-Henry County area. He said he even had spoken with the attorney general’s office and looked into whether NCI could start a new foundation.

But even after former interim director Jackson tried to improve communication with the foundation, it’s déjà vu, Hall said.

“I’m pretty damned tired of doing the same thing over and over again,” Hall said.

The Bulletin’s investigation “put some sunshine on this whole thing,” he said.

Hall said he can’t get straight answers from DeKoninck, a pastor who lives in Tennessee.

“Every time I ask a tough question, I get a Bible verse,” Hall said. “It’s just weird.”

Two NCI board members who missed the board’s only previous meeting of the year in June — Catherine Tanner Brown and Maria Pia Tamburri — were absent again Friday. Del. Kathleen Murphy, D-Fairfax, was absent Friday, and Sen. Emmett Hanger, R-Augusta, couldn’t attend the meeting because of Senate business. Del. Les Adams, R-Pittsylvania, attended half of the retreat.

Martinsville Speedway President Clay Campbell was the speaker at a Thursday evening dinner for NCI’s board at Hamlet Vineyards in Bassett, and a tour of the speedway was scheduled at the conclusion of the retreat Friday afternoon, including a lap around the track. But the board didn’t have enough time to get to the tour.

About the New College Institute 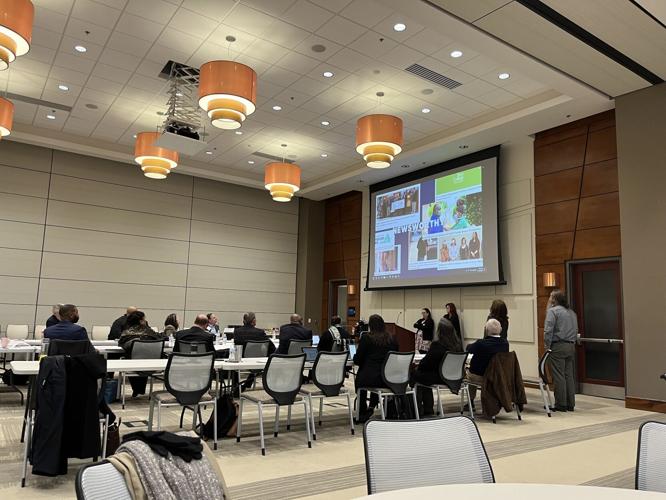 The board of New College Institute watched a staff presentation during NCI’s retreat in Martinsville on Friday. 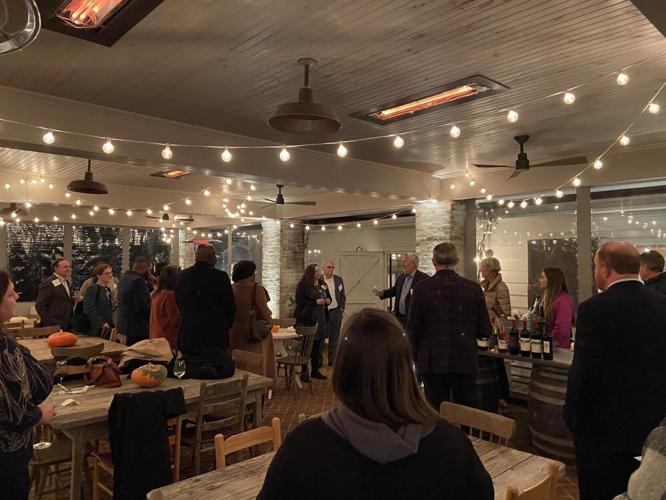 New College Institute officials were among about 30 people gathered for dinner and a reception on Thursday, Nov. 17, 2022, at Hamlet Vineyards in Bassett. (Bill Wyatt | Martinsville Bulletin)