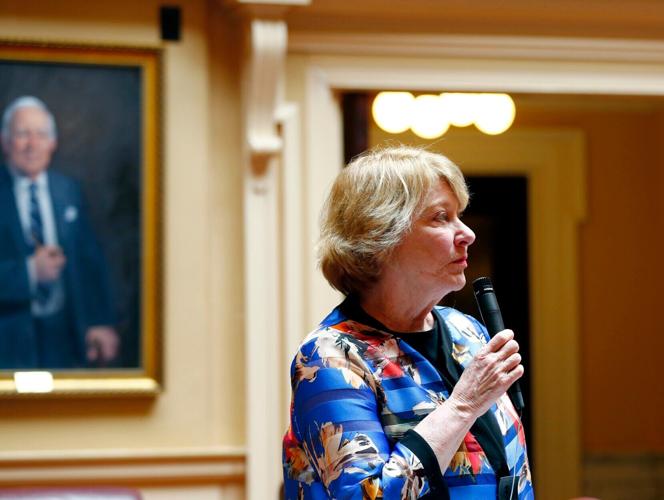 Sen. Janet Howell, D-Fairfax, spoke June 1 about the budget in the Senate chamber. 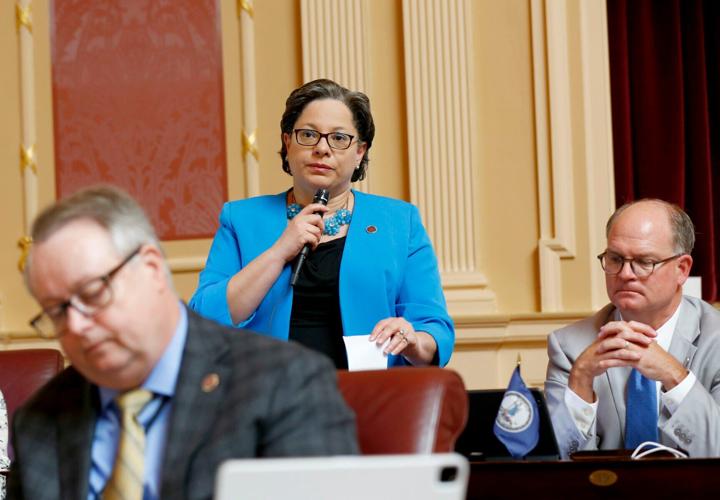 RICHMOND — Several lawmakers called out Virginia’s budget negotiators June 1 for adding a new marijuana possession crime in the state budget in a process that lacked transparency and public input.

The budget creates a new misdemeanor crime for possession of 4 ounces of marijuana in public and comes after the legislature in 2021 legalized small amounts of marijuana for personal use by adults.

Sen. Jennifer McClellan, D-Richmond, told colleagues in the Senate it was rare for the legislature to create a new crime in the budget and said she hoped it wouldn’t do it again.

Previous legislative discussions on marijuana allowed for public comment from people who “had been disproportionately impacted by the war on drugs,” McClellan said, but the current process didn’t.

“A handful of people that didn’t include a single member of the Virginia Legislative Black Caucus deciding new criminal penalties … with no real opportunity for public input is concerning,” she said.

Asked about the concern, Howell said, “It’s so convoluted, but I would refer people back to the JLARC study that recommended that.”

She was referencing a study a year ago by the state’s Joint Legislative Audit and Review Commission that recommended Virginia create a misdemeanor charge for adults who have what the state deems to be too much marijuana. Such proposals already failed twice this year during the legislative process.

Several other lawmakers also criticized the decision by Howell, Barker and Knight to write marijuana policy into law without the usual feedback and transparency.

Even some budget conferees — the small group of lawmakers who help write the budget — were caught by surprise over the marijuana provision, which was just released publicly Sunday.

Sen. Louise Lucas, D-Portsmouth, and Sen. Mamie Locke, D-Hampton, were Senate conferees who signed off on the budget but noted their objection to the marijuana item.

Democrats legalized small amounts of marijuana for people 21 and older in 2021. Adults can possess up to an ounce and grow up to four plants in their homes in Virginia. Possession of any amount above an ounce and up to a pound is illegal but punishable by a $25 civil infraction. Possession of more than a pound is a felony.

“Research and data have already outlined the historic disparate enforcement of these laws against Black Virginians,” the statement from the Virginia CannaJustice Coalition said.

Col. Wayne Huggins was grinning as he waited at the Capitol for the General Assembly to adopt a budget on Wednesday.

Gov. Glenn Youngkin is lagging behind his own deadline for reviewing requests by state employees to work remotely, as the administration scrambles to process teleworking applications a month before the new policy takes effect.

Gov. Glenn Youngkin isn’t having second thoughts about his new policy on telework to push state employees back into the office early next month, but the General Assembly wants to know how many employees have been working remotely during the COVID-19 pandemic.

Virginia’s divided General Assembly has passed a compromise state budget that would offer nearly $4 billion in tax relief, increase pay for teachers and other public employees, boost K-12 education spending and fund a wide range of projects from roadwork to school construction. Lawmakers met Wednesday in a special session because they deadlocked over the spending plan as their regular calendar drew to a close in March. The legislation now goes to Republican Gov. Glenn Youngkin, who can sign it or seek changes. Earlier this week, Youngkin called the compromise a “good framework.”

Assembly to take up budget, including millions for lab schools, officers in schools

Gov. Glenn Youngkin is holding his fire until after the General Assembly acts Wednesday a pair of budgets that deliver most of the tax cuts the freshman Republican governor promised in his campaign last fall, with some help from his Democratic predecessor.

Sen. Janet Howell, D-Fairfax, spoke June 1 about the budget in the Senate chamber.