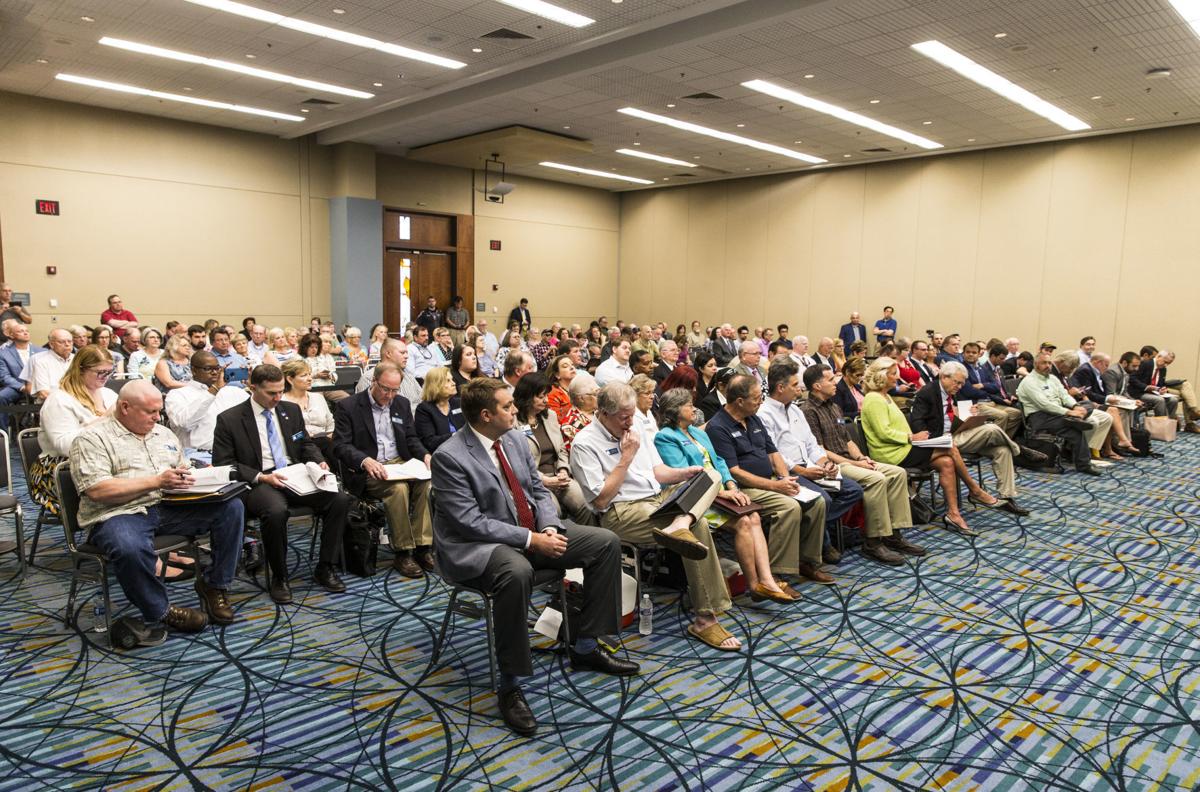 The governing body of the Republican Party of Virginia holds a committee meeting at Greater Richmond Convention Center on June 22, 2019. 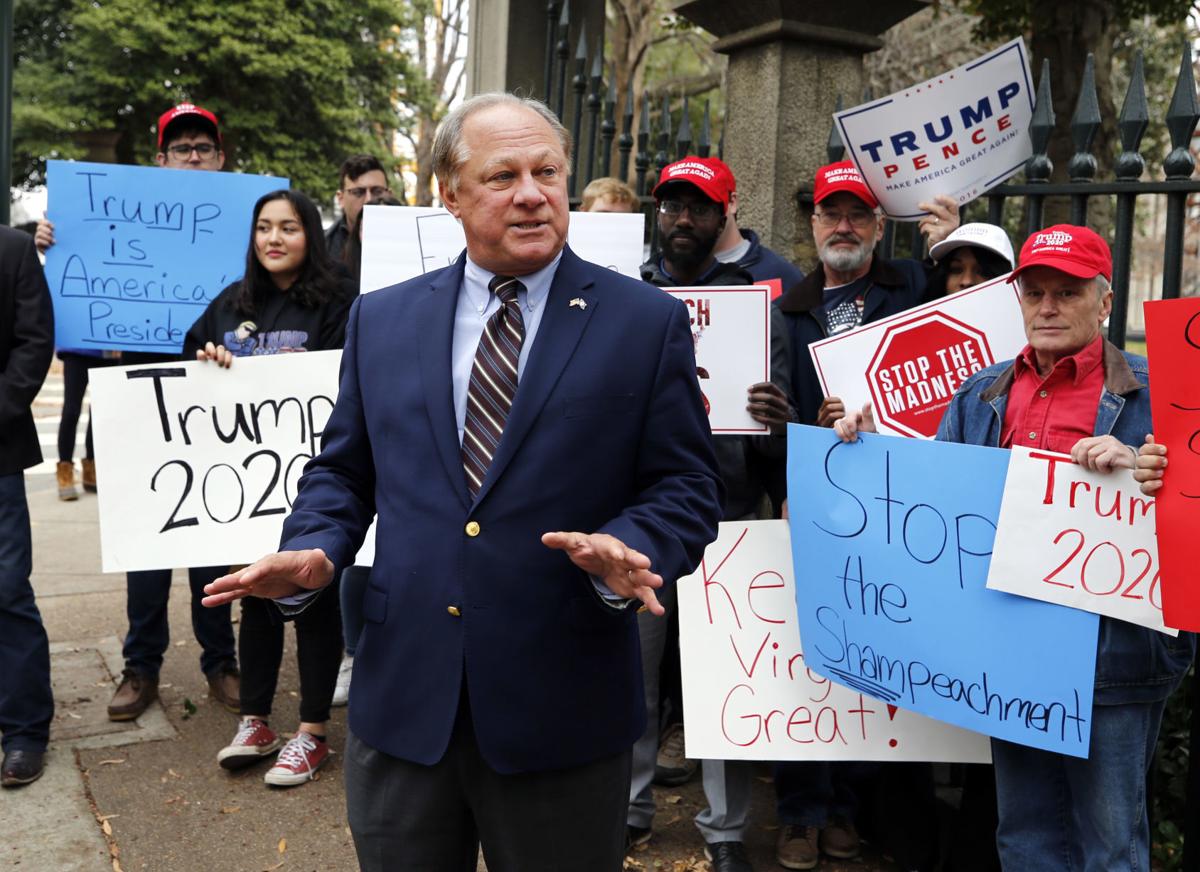 At a small rally outside the Virginia Capitol on Monday, state GOP Chairman Jack Wilson urged Virginia Rep. Abigail Spanberger, D-7th, to vote against the impeachment of President Donald Trump when the legislation comes up for a House vote this week. 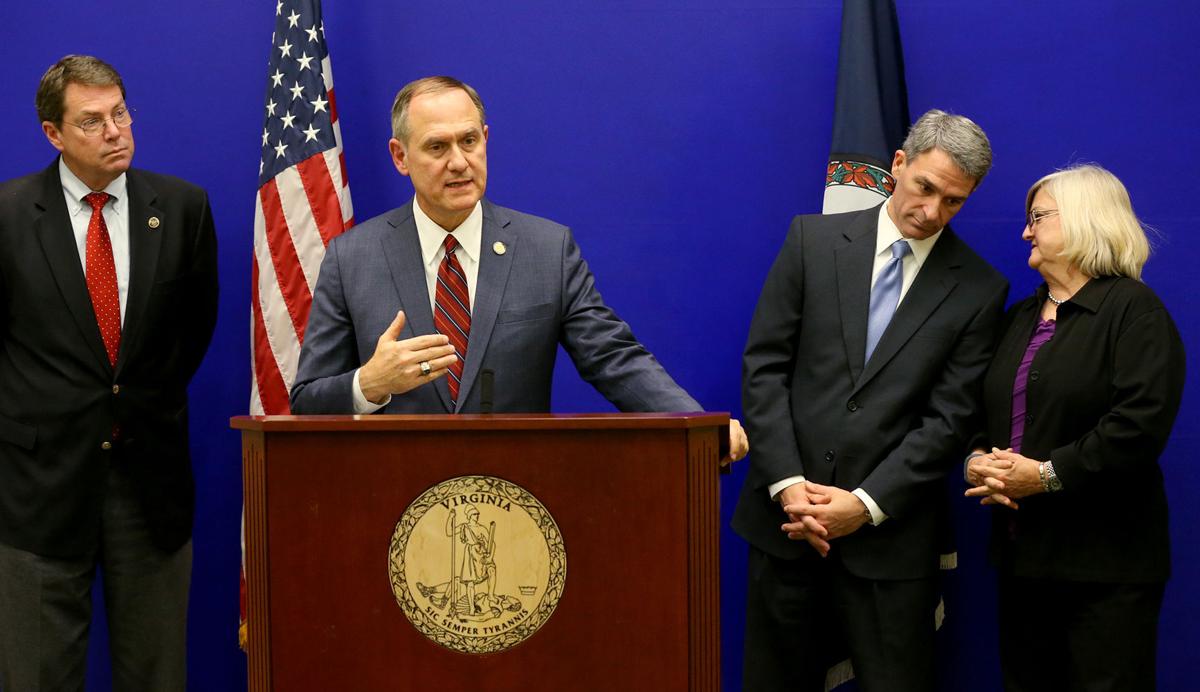 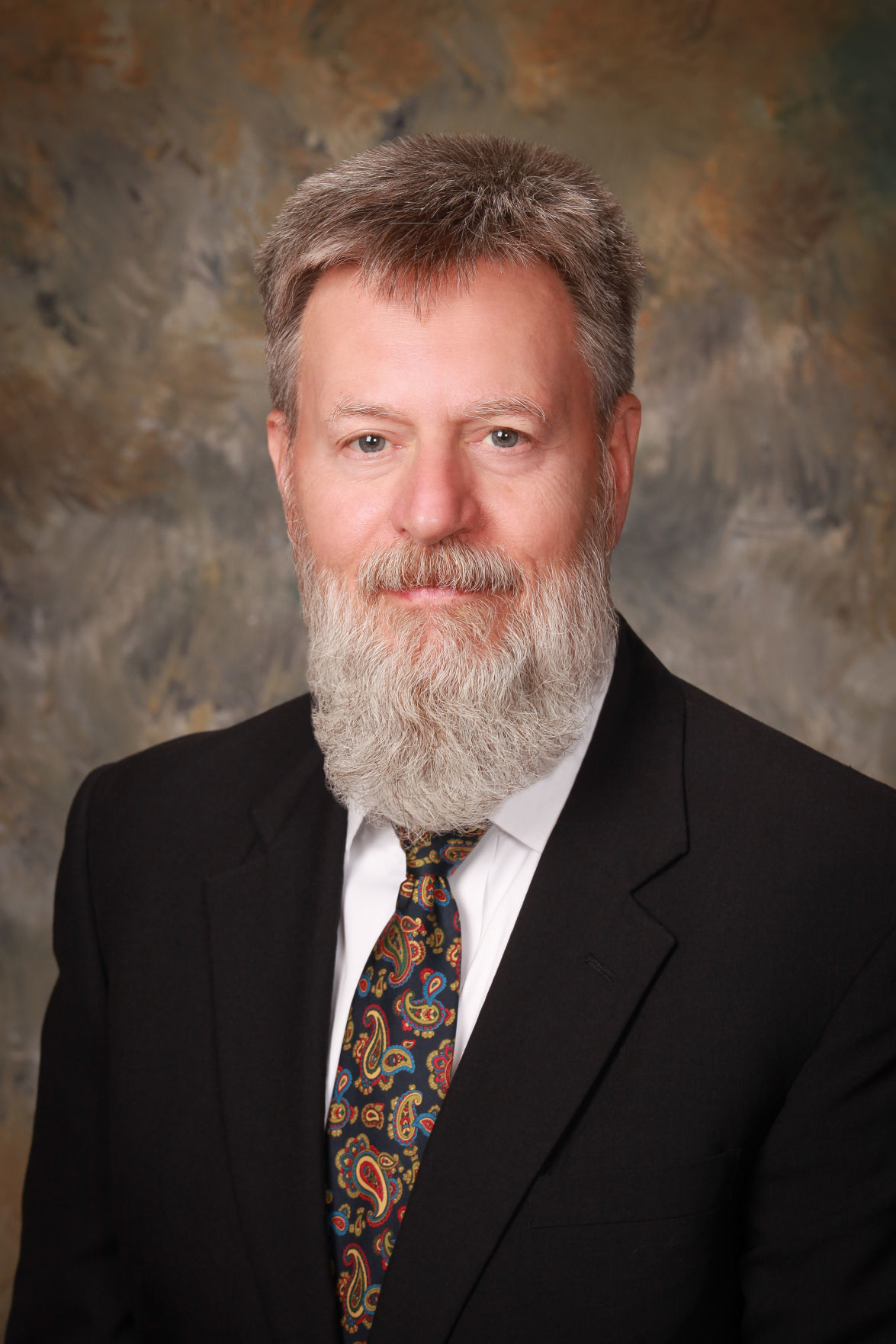 Facing a decade-long drought in statewide elections, Virginia Republicans will decide this week on a party chairman for the next four years.

Seeking the post are incumbent Jack Wilson, a lawyer from Chesterfield County, former Del. Rich Anderson of Prince William County and Northern Neck GOP leader Michael Schoelwer. The three are looking to turn around a party that hasn't won statewide since 2009, when Bob McDonnell beat Sen. Creigh Deeds, D-Bath, for governor and Republicans were elected lieutenant governor and attorney general.

In the last three election cycles the GOP has lost control of the state Senate and the House of Delegates and the majority in the state's congressional delegation, thanks in part to an anti-Trump wave.

With the party at a crossroads and another statewide election in November for president and U.S. Senate, the Republican Party of Virginia is set to hold an unassembled convention from 9 a.m. to 3 p.m. Saturday, Aug. 15, more than three months after its initial convention date. At the convention, party delegates from across the state will take to polling locations within Virginia’s 11 congressional districts to vote for a state chairman using ranked-choice voting.

The chairman will lead the party’s efforts to change the Democratic tide that has swept across the state recently. In the next four years, there will be congressional races, two chances to fight for control of the House of Delegates and Sen. Tim Kaine's seat comes up in 2024, among other contests.

“Typically Virginia is so much different and the two-party system functions differently than it does nationally, but I really do think (the state of the Virginia’s GOP) has a lot to do with the effect of Trump," said Alex Keena, a political science professor at Virginia Commonwealth University.

"There’s tension within the Republican Party of those who are embracing Trumpism and those who are trying to go back to the way Republicans in Virginia used to be,” he said. “They’re sort of undergoing an identity crisis.”

All three candidates say they support President Donald Trump’s re-election effort and will work to have new people join the party.

Here are the candidates, in alphabetical order, looking to lead the Virginia GOP.

As McDonnell, Bill Bolling and Ken Cuccinelli won all three races at the top of the ticket, Anderson narrowly defeated Democratic incumbent Paul Nichols for election to the House of Delegates. Like the rest of the state's population centers, the Northern Virginia district has turned increasingly blue during Trump’s tenure. He thinks the state party needs to do more.

“I’ve watched a gradual erosion of a will to fight and win,” Anderson said.

That’s why he’s running for the chairmanship.

“Public service is my calling and this is what I feel called (for) right now,” he said. “Our party has a lot of challenges right now, which I think emanate from some leadership shortfalls.”

Anderson, a Virginia native who graduated from Virginia Tech, spent 30 years in the U.S. Air Force and retired from the Pentagon in 2009. That’s when he won election to the House of Delegates, where he chaired the House Science and Technology Committee and the General Assembly’s military and veterans caucus.

Democrat Hala Ayala beat Anderson, a Woodbridge resident, in 2017 as part of the initial Trump rebuke in Virginia. Ayala, D-Prince William, topped him again in 2019, winning by nearly 10 percentage points.

Anderson said he thinks the state party hasn’t done the necessary fundraising or get-out-the-vote efforts for Republicans to win seats across the state. He also raised issues with Republicans not running a candidate in every race last year, when every seat in the General Assembly was up for election.

“It’s imperative that the party run candidates in every single race, even in the bluest areas of the state because that’s what democracy is all about,” he said.

Michael Schoelwer referred to 2019 as a “debacle” for Republicans.

“The 2019 losses were completely unnecessary,” he said.

Schoelwer, chairman of the Lancaster County GOP Committee, said he’s tired of watching Republicans lose across the state. Like Anderson, Schoelwer said he was frustrated by the party not running more candidates.

“We should represent huge swaths of the state. I think we’ve missed an opportunity to represent huge Republican-leaning and Republican-valued communities in Northern Virginia,” he said. We’ve just taken a bye on it and I’m not sure why.”

After growing up on a farm in southern Ohio, Schoelwer attended the University of Notre Dame and served 13 years of active duty in the U.S. Marine Corps. He spent 28 years in the Central Intelligence Agency before retiring in 2014, the same year he joined the local Republican committee.

As a local party official, Schoelwer said the state party needs to parlay its local bases into more outreach.

“The grassroots are very strong, but to me where it comes apart is at the center,” he said. “I am absolutely committed to get back into contacting every conservative and Republican-leaning voter in Virginia, regardless of their background.”

The Northern Neck resident, who worked on President Richard Nixon’s re-election campaign while in high school in 1972, said Republicans need to do more than criticize bills being passed in the new-look General Assembly, but offer alternatives instead. He added that he will focus on creating a vision for the party.

“Right now it’s like a boat without a rudder,” he said. “We’re kind of drifting.”

Jack Wilson wants Virginia’s Republican Party to be a “big tent” like the one President Ronald Reagan used to speak of, appealing to independents and being more inclusive.

He called it “obvious” that Republicans have “lost too many races” over the past decade, which the incumbent attributed to intraparty fighting distracting from efforts to beat Democrats.

“A lot of that goes to the fact that we have shrunk our party and excluded voices that need to be at the table,” Wilson said, specifically referencing suburban, young and female voters. “We need to incorporate those voices again into our winning coalition.”

He added: “That also includes communities of color. We have issues that resonate in the Black community, the Hispanic community, the Asian Pacific Islander community. We just need to get all those voices at the table and not exclude them for fear of perhaps diluting our message.”

Wilson, a Chesterfield County lawyer and longtime Republican chairman of the 4th Congressional District, was elected in 2018 to the post of state party chairman, finishing the term of former chairman John Whitbeck. The former Army captain is a graduate of West Virginia University and the Columbia University School of Law.

“We’ve got a lot of important work to do in Virginia with the Republican Party and I have the experience and leadership to make some of the necessary changes,” Wilson said. “We need to be a big tent party again and I want to lead us to that.”

Get Election 2020 & Politics updates in your inbox!

Keep up on the latest in national and local politics as Election 2020 comes into focus.

The Republican Party of Virginia says state elections officials have created confusion among voters ahead of the November election by failing to make it clear that a witness signature requirement for absentee voters has been waived.

The Virginia Department of Health on Monday added to its website a new pandemic dashboard to give local leaders a better grasp of how the coronavirus is acting in their communities.

More than 95% of the membership of the Unitarian Universalist church formerly known as Thomas Jefferson Memorial voted on Sunday to drop the man from Monticello’s moniker.

Slave sale block set to be displayed in museum, with context

A 176-year-old stone block that was used for slave auctions in Virginia will go on display at the Fredericksburg Area Museum, with signs explaining the context of recent protests against racial injustice that left it covered in graffiti.

Aside from voting for president, a U.S. Senate seat and in congressional contests, Virginia voters this fall will be asked to weigh in on a proposed constitutional amendment to change the state’s redistricting process.

Puneet Ahluwalia, a Northern Virginia business consultant, has joined the competition for the GOP’s lieutenant governor nomination in 2021, campaigning on a message of “hope, growth and opportunity.”

The Virginia Department of Corrections is reporting that two more offenders with COVID-19 have died at the Deerfield Correctional Center, where many older inmates and those with medical problems are held.

The poll conducted this month by Hampton University and The Associated Press-NORC Center for Public Affairs Research found that 46% support removal of Confederate statues and 42% oppose removal.

The governing body of the Republican Party of Virginia holds a committee meeting at Greater Richmond Convention Center on June 22, 2019.

At a small rally outside the Virginia Capitol on Monday, state GOP Chairman Jack Wilson urged Virginia Rep. Abigail Spanberger, D-7th, to vote against the impeachment of President Donald Trump when the legislation comes up for a House vote this week.