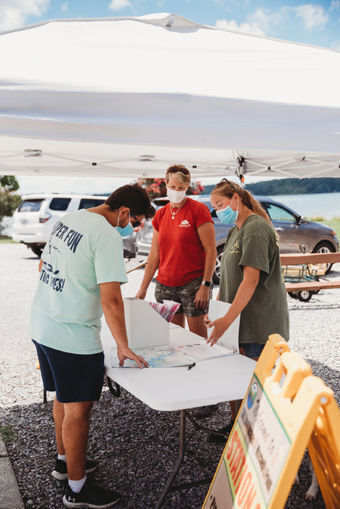 Mitchell’s Point Marina co-owner Debbie Prowse (center) helped a large number of customers get oriented to Smith Mountain Lake before renting them a boat this summer. 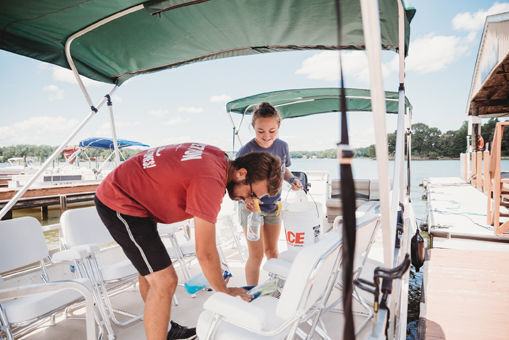 Staff members at Bridgewater Marina cleaned and sanitize boats between rentals this summer.

This past March, Mitchell’s Point Marina co-owner Jeff Prowse was preparing for the worst. He was seriously considering his options, some of which included bankruptcy, due to the possibility no vacationers would be coming this year. Seven months later, he is still reeling from the busiest and most profitable summer he has ever experienced.

“It was unprecedented,” Prowse said of this summer’s record number of customers, especially his boat rental business. “Every day was like the Fourth of July.”

Prowse, like many business owners around the lake, was shocked with how the summer turned out. In March, limits were put on businesses considered nonessential, and people stayed close to home as COVID-19 spread across the country. But just a few weeks later, lake businesses began seeing an uptick in visitors as people looked for socially distanced places to get away.

Boat rentals were completely booked at Mitchell’s Point Marina from early May until well after Labor Day. It was so busy at one point during the summer, Prowse said he had to rent an adjacent property at the marina and enlist some of his employees as valets to park cars to assure there was enough room.

Prowse said the profit he made this year in boat rentals compared to what he usually makes in two years. “It was just absolutely crazy,” he said.

Chris Bechtler, manager of Crazy Horse Marina, also saw a major uptick in customers this year. The marina sells gas and supplies, as well as serves as a satellite boat rental location for Bridgewater Marina. He said the only time that was slow during the entire summer was during Memorial Day weekend when the lake flooded.

The marina held back on hiring new employees for the summer figuring it would be a slow year due to the pandemic. That changed in the spring when customers began coming in droves.

Bechtler said the marina has sold 122,000 gallons of gas this year. The amount is a major jump from the total of 88,000 last year.

Most years the bulk of customers are limited to the weekends, Bechtler said. This summer, the marina saw a steady stream of customers throughout the week, in addition to weekends that were busier than previous summers. That resulted in a nearly 50% increase in business for the year, he said.

Boat sales were also significantly up this year. Dale Runyon, owner of Bayside Marina, said he sold his entire stock of new boats in early July. He said most years he has boats still available for sale well into August or September.

“It was a very good year,” Runyon said. “It was not what we anticipated by any means.”

Runyon said his boat service shop was also packed throughout the summer with customers in need of repairs. Due to boating being so popular this year, he said several parts were in high demand, which caused a delay in completing repairs. He said it would have been worse if he didn’t stock up on parts for the year each spring.

With boating being a perfect pandemic activity, there was a large number of vacationers renting homes this summer to enjoy the lake. Mary Lou McDonald, broker/owner of ML Realty, said her listings of short-term rentals around the lake were booked up more than ever this year. She expects 2020 to be her most profitable year since 2006.

“For us, the coronavirus has been a blessing for business,” McDonald said.

The year started out with multiple cancelations. McDonald said many weddings were canceled, along with annual lake events such as the Antique and Classic Boat Show and the Wine Festival that usually brought in many short-term renters. “At the end of March, everything looked bleak,” she said.

By the time April rolled around, she was being inundated with calls. McDonald said people began asking to rent homes for weeks at a time instead of the usual weekend visits. She is still booking rentals at homes, long after the point when they traditionally begin to slow down.

For restaurants around the lake this summer, social distancing rules kept many from serving at full capacity. Instead restaurants focused more on takeout.

Karen McRoy, general manager of Benny Adelina’s at Westlake Towne Center, said they had a good year despite the concerns when the pandemic first started in March. “It didn’t affect us as much as we thought it would,” she said.

Sales at pizzeria were comparable to previous summers even with restaurant restrictions on indoor seating.

Chris Finley, executive director of the Smith Mountain Lake Regional Chamber of Commerce, said he has been amazed and inspired at how the community has been able to pull together this year. He said many businesses experienced unprecedented growth while some were harder hit by the pandemic.

Businesses that relied on large crowds such as restaurants and movie theaters were hardest hit by the pandemic. Westlake Cinema closed temporarily recently due to ongoing restrictions, as well as the lack of new movies being released nationwide.

While not every business at the lake experienced a record year, Finley said local businesses have come together to support one another. “Our community is made up of creative and dedicated leaders who work hard at making Smith Mountain Lake more vibrant and dynamic,” Finley said. “Collaboration remains a key ingredient to success and our community has, and always will be, supportive of each other. Additionally, our local government has provided recovery grant opportunities to assist those businesses impacted by the pandemic.”

With the current pandemic likely to continue well into next year, Finley said he expects the lake will continue to be a popular destination. “Smith Mountain Lake is the absolute perfect travel destination offering an abundance of safe on- and off-water socially distant outdoor adventures and cultural experiences,” he said.

“Based on industry trends, visitors will continue to easily daytrip or vacation at Smith Mountain Lake to fish, camp, golf, enjoy numerous water sports and play on our more than 500 miles of shoreline.”

Police in Virginia say that a 2-month-old baby girl has been killed by a German shepherd.

Gary Martin's precarious living situation may have a pathway to a happy ending for the lifelong Pulaski resident, according to the town's mayor.

Virginians who are receiving unemployment benefits could see a delay in their payments this week, partly because of a construction accident Tuesday that disrupted computer networks for several state agencies.

Anecdotal accounts and the scattering of crime statistics from different localities in the region suggest that as in so many matters dealing with coronavirus, different places have had different experiences.

Enacting restrictions to prevent the spread of the coronavirus is more important than removing them to get the economy going, according to a majority of Virginia voters polled this month.

The lines at four new satellite polling places for early voting in Chesterfield County this week signaled a new way of running elections in Virginia, triggered by a public health emergency that has transformed a pivotal congressional campaign that could determine political control of the U.S. House of Representatives.

Virginia Gov. Ralph Northam declined to sign into law a measure designed to discourage racial profiling of motorists by police, concerned that some language could prevent authorities from pulling over vehicles for serious safety concerns.

A Stafford County woman who burned her husband to death more than three years ago was ordered Thursday to serve 38 years and three months in prison.

Derrick Stewart had a plan in mind when he went to see Pastor Alvin Murdock back in the summer of 2016.

Answering the most common questions people have about voting

Answering the most common questions people have about voting

Mitchell’s Point Marina co-owner Debbie Prowse (center) helped a large number of customers get oriented to Smith Mountain Lake before renting them a boat this summer.

Staff members at Bridgewater Marina cleaned and sanitize boats between rentals this summer.