Monday Update: Isaias will come ashore in N.C. tonight, then bring flooding rains to Va. on Tuesday morning
Share this
Only $5 for 5 months

Metro Richmond and Tidewater are now under a Tropical Storm Warning ahead of Isaias, which will blow through later tonight and Tuesday morning.

At 5 a.m., the storm was centered 280 miles south-southwest of Myrtle Beach, according to the National Hurricane Center. It had peak sustained winds of 70 mph, while tropical storm-force winds spread out 125 miles from the center. Isaias was moving north at 9 mph, but will accelerate over the next 24 hours.

Tropical Storm Warnings are in place from Surf City, N.C. to Rhode Island, including the Chesapeake Bay, Pamlico Sound and Albemarle Sound.

Scattered downpours will increase across Virginia this afternoon and evening, but the storm's steadiest rain will move through late overnight and clear out by early Tuesday afternoon.

The tropical storm-force gusts across central and eastern Virginia will likely occur between 4 a.m. and 2 p.m.

Creeks and low-lying roads across our region could quickly become inundated on Tuesday when Tropical Storm Isaias blows through Virginia.

Confidence is now high that excessive rainfall will be our main threat, and totals could be major for some.

Totals look to exceed 3 inches in widespread fashion across metro Richmond, with a high-end potential for up to 8 inches somewhere within a 50 mile radius.

A several-hour burst of rainy, windy conditions during the morning and early afternoon could also topple trees and lead to outages, especially east of Interstate 95.

On Sunday afternoon, the National Weather Service extended a tropical storm watch up to metro Richmond and Fredericksburg and all points east toward the coast.

The risk of strong gusts in excess of 45 mph will be highest across Tidewater, and much lower throughout the Piedmont. Isolated tornadoes that spin up with short notice are also more of a concern east of Interstate 95.

But Isaias' soaking rain will spread farther across Virginia than the wind.

Flash flood watches are posted for most parts of the state between Interstate 81 and the Chesapeake Bay from late Monday until late Tuesday.

The heaviest rain is likely to fall along and west of the storm's path. With the center still likely to pass over Tidewater or the peninsulas, that puts the rainfall bull's-eye atop central Virginia.

Scattered downpours will overspread the area by Monday afternoon, but the steadiest rain associated with the core of the storm is expected to move in from the south early on Tuesday morning.

The most hazardous road conditions could coincide with Tuesday morning's commute.

The steady rain will quickly sweep out on Tuesday afternoon as Isaias races up the Eastern Seaboard, with clearing in the evening at the very latest, but runoff could extend minor river flooding into midweek.

Here are the most likely ranges of rain and wind across central and eastern Virginia. These could trend higher or lower if the storm evolves differently. Look for updates here on richmond.com in the coming days.

Metro Richmond and the Tri-Cities

• Up to 2 feet of storm surge in vulnerable coastal areas.

Hampton Roads and the Eastern Shore

• Up to 2 feet of storm surge in vulnerable coastal areas.

Southside, including Emporia and South Hill 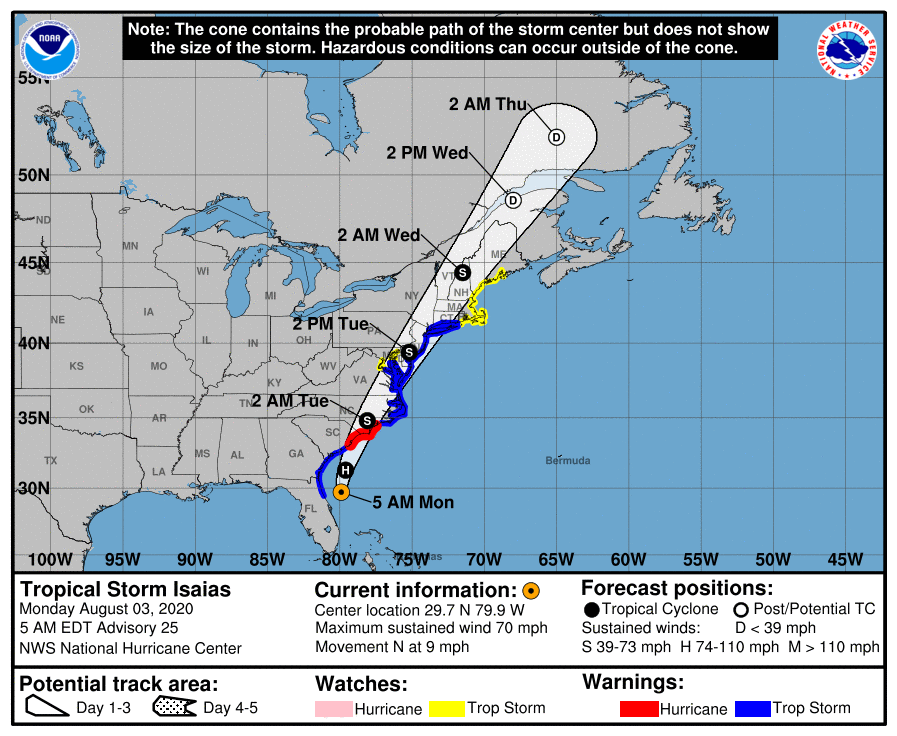 Potential path of Tropical Storm Isaias over the next 72 hours, as of Monday morning. According to the National Hurricane Center, the storm’s wind, rain, surf and surge will likely extend away from the center position indicated on the map. 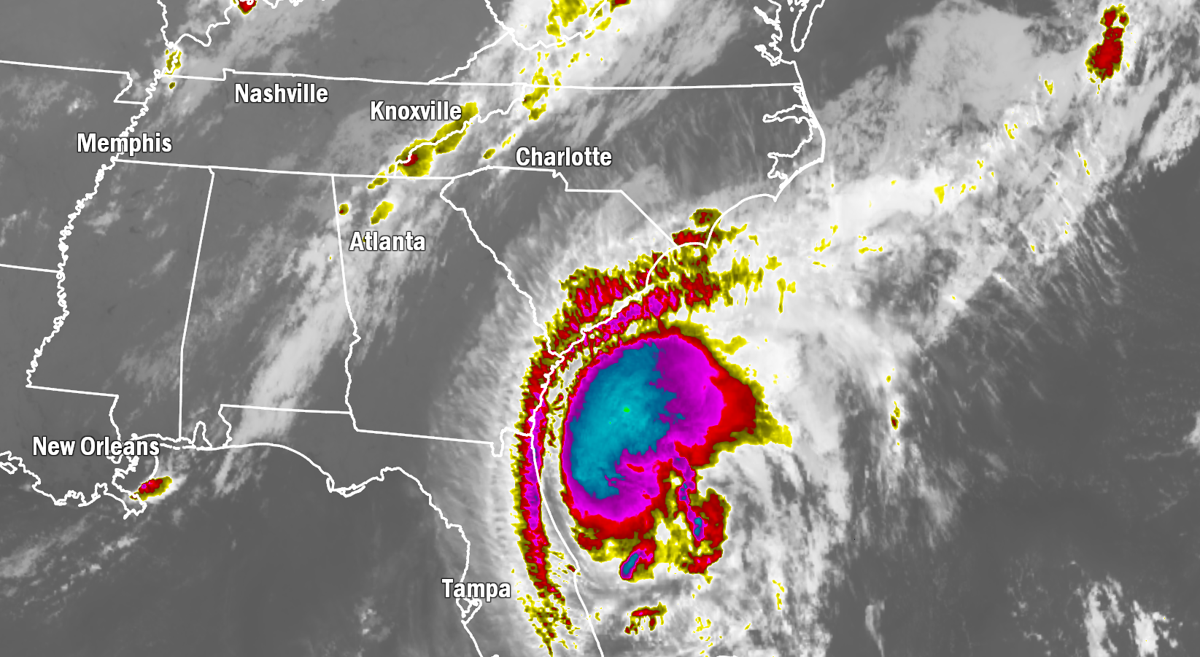 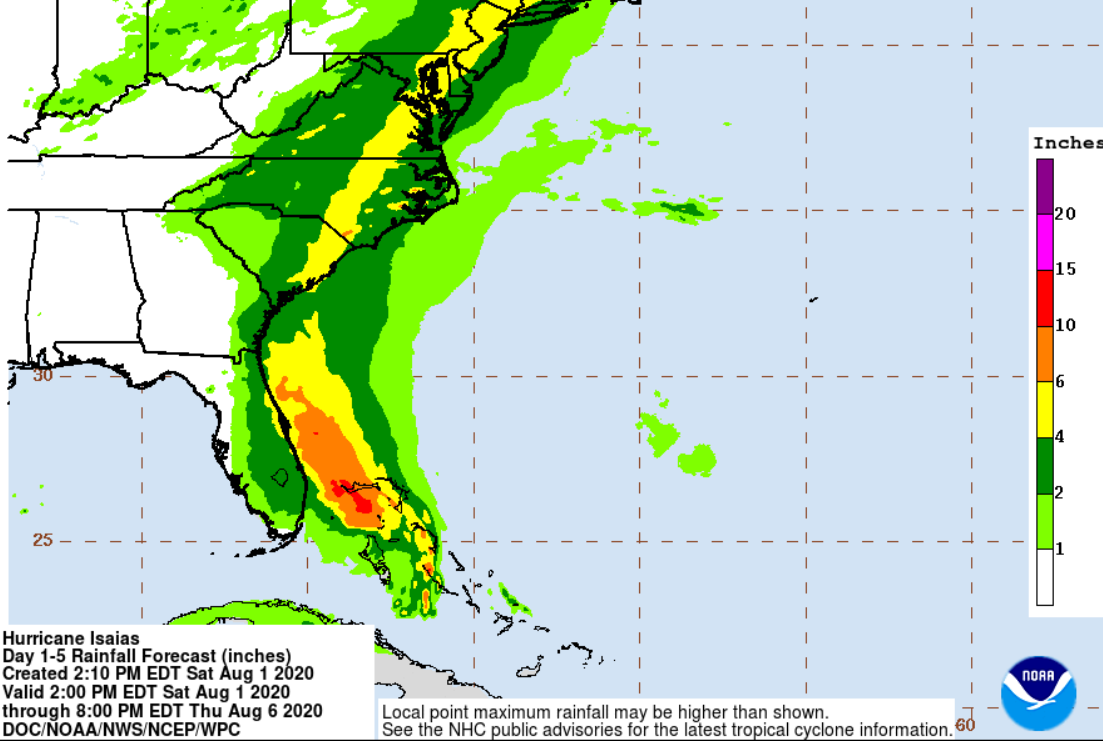 Projected rainfall amounts from Tropical Storm Isaias. Richmond could be in the zone that receives 4 to 6 inches of rain, mainly on Tuesday, with potentially higher amounts. 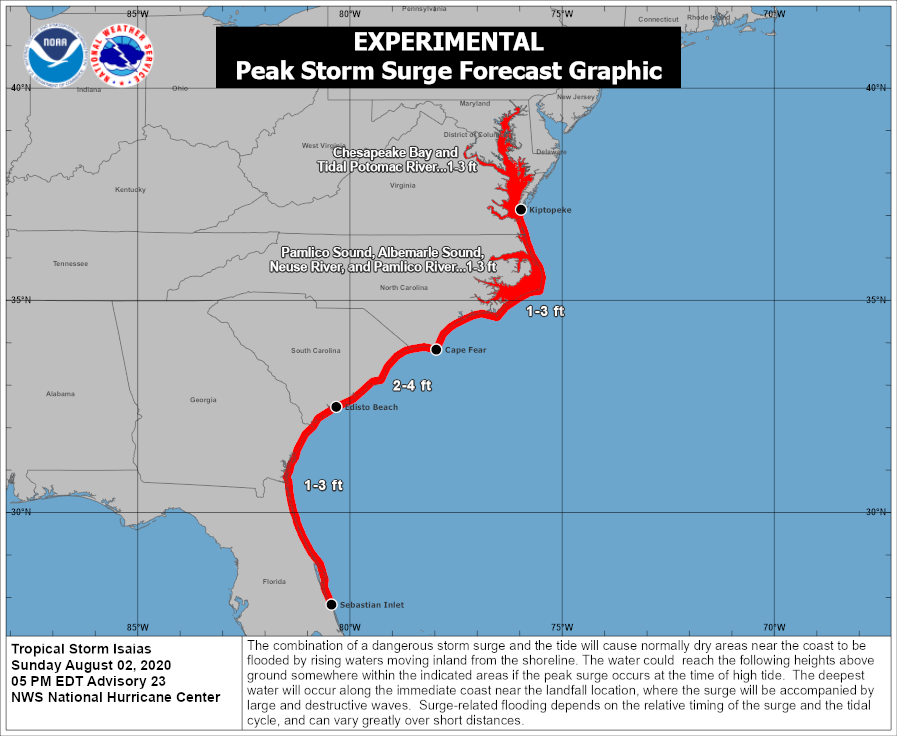 As of Sunday evening, the forecast for peak storm surge associated with Isaias. 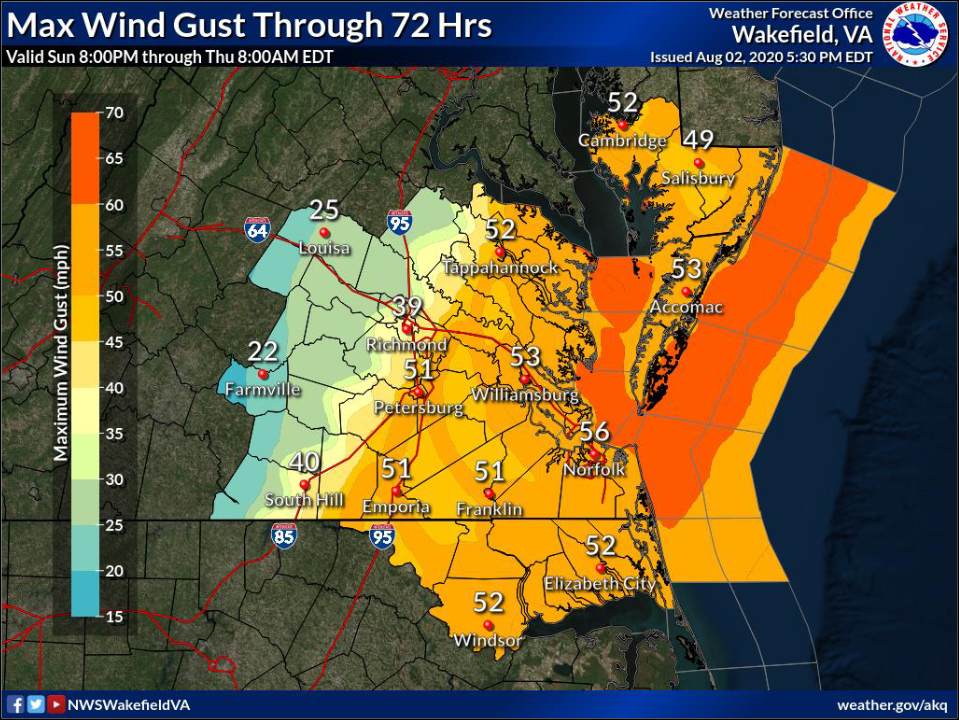 Forecast for peak gusts associated with Tropical Storm Isaias on Tuesday, as of Sunday afternoon.

Areas under a flash flood watch on Monday night and Tuesday are shaded in green, which includes metro Richmond and most of Virginia.

Areas under a tropical storm watch on Tuesday are shaded in pink, which includes metro Richmond and all of Tidewater.