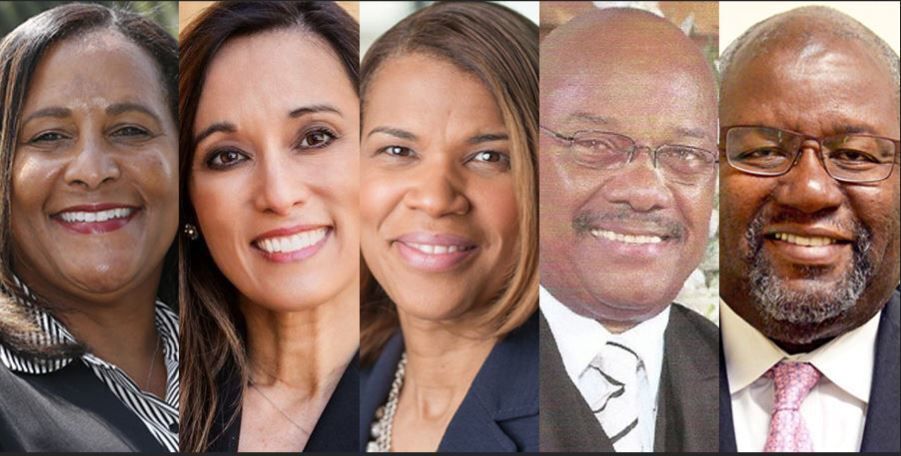 Richmond Times-Dispatch Virginia Parole Board, from left: Chair Tonya Chapman, Vice Chair Linda Bryant, Kemba Smith Pradia, A. Lincoln James and Sherman D. Lee. Bryant submitted her resignation letter on Feb. 27, to be effective March 15, after she was elected by the General Assembly to serve as a judge of Chesapeake General District Court. Her replacement hasn’t bee named. 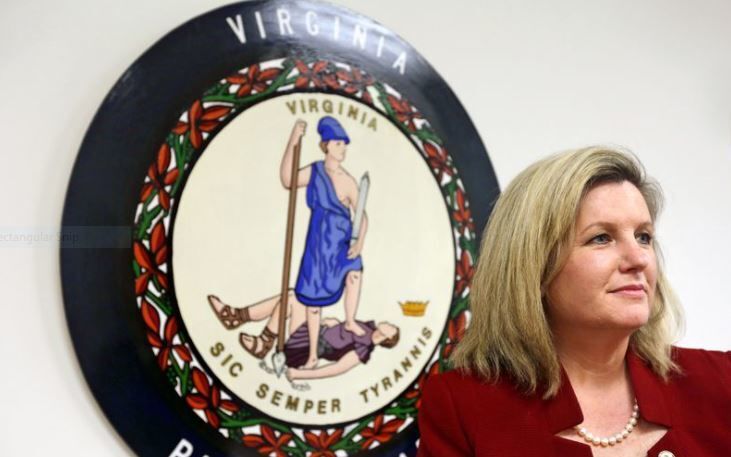 Former Virginia Parole Board Chair Adrianne Bennett, who left April 16, 2020, after being elected by the General Assembly to serve as judge in Virginia Beach Juvenile and Domestic Relations District Court.

RICHMOND — What started as an investigation of the Virginia Parole Board’s controversial decision to release a man convicted of killing a Richmond police officer 40 years ago has morphed into a much broader probe that has led the state’s watchdog agency to find violations of law and policy in at least eight other parole decisions involving convicted killers.

The nine cases show a pattern of violations that center on releasing inmates without first giving proper notice to state prosecutors or the family members of the victims, who are allowed to provide input on the impact an inmate’s release may have on them or the community before they are granted parole, according to reports by the Office of the Inspector General that were obtained by the Richmond Times-Dispatch.

OSIG did not investigate the merits of whether the inmates should be released from prison, but rather whether the parole board followed policy and state law in making the decisions.

“It appears that neither the rules nor the law were followed,” said Suffolk Commonwealth’s Attorney Phil Ferguson, who personally prosecuted or oversaw the prosecution of three of the inmates released by the board within a two-week span last April. “The three cases in Suffolk were among the worst people I’ve prosecuted in my many years as a prosecutor. The crimes were committed by people that maybe should have spent the rest of their life in prison.”

“It appears that they just had an agenda and that these [inmates] were getting older and they wanted them out of prison — and that’s what they did,” he said.

Ferguson filed three complaints with the OSIG, who substantiated allegations against the parole board in all three Suffolk cases last fall. But the findings were kept secret from the public and the General Assembly. Even Ferguson was kept in the dark, he said.

OSIG made heavy redactions to the public version of reports in half a dozen cases that were provided to news media last year. The inmates’ names and the nature of the parole board violations were not disclosed.

Unredacted copies of those reports recently have been made available to a handful of reporters, and the substantiated allegations largely are identical in each parolee’s case.

Former Parole Board Chair Adrianne Bennett, who left April 16, 2020, to become a judge in Virginia Beach, is named specifically in each of the reports and she has taken the brunt of public criticism. All the disputed releases occurred as Bennett was on her way out the door and succeeded by Tonya Chapman, a former chief of police in Portsmouth.

Bennett’s attorney, Virginia Beach lawyer Jeffrey Breit, echoed statements recently made by Clark Mercer, the governor’s chief of staff, who described OSIG’s findings of wrongdoing as biased with a lack of objectivity. Like Mercer, Breit supports an independent investigation of controversies surrounding the board.

OSIG’s reports, however, say that the law and parole board policies were not followed.

Breit said Bennett is waiting to comment until an outside investigation has been conducted.

Here are summaries of some of the recently released OSIG reports that found the parole board and its former chair violated Virginia law and its own policies and procedures:

In March 1995, Dwayne Markee Reid was sentenced in Suffolk Circuit Court to life plus ten years in prison for capital murder, robbery and felony use of a firearm in the 1993 slaying of 32-year-old Thomas Runyon on a city street in Suffolk. At trial, the prosecutor said Runyon was shot for “fun” and “for no other reason than to see what if felt like.” Reid, who was 16 at the time, had previously been found guilty in another killing at age 14.

Reid became eligible for parole in 2010 and had his sixth parole interview on Jan. 27, 2020. The hearing examiner recommended that he not be granted parole due to his extensive criminal record and prior convictions while under community supervision, which indicated “unlikely compliance with conditions of release” should he be paroled.

The parole board granted Reid parole on March 28, 2020, and he was released on April 17 after serving 26 years and eight months in prison.

OSIG found the parole board failed to provide written notice of Reid’s release to the Suffolk Commonwealth’s Attorney’s Office within the statutory time frame, and did not “endeavor diligently” to contact the victim’s family before making any decisions on Reid’s release. OSIG investigators determined one of the victim’s sisters was first notified of Reid’s release by a news reporter, the report said.

Tyson Xavier Golden was sentenced to three life sentences plus 118 years for his role in three violent home invasions in 1986 in Roanoke that ended with the beating death of 91-year-old Larry White, who was attacked and robbed along with his 87-year-old sister, Maggie Spinner, in an apartment they shared. Golden, who was 34 at the time, was one of three men charged.

The Virginia Department of Corrections determined Golden was ineligible for release due to a Virginia law that barred parole for offenders who committed three separate felonies with a firearm, including robbery and murder. However, the parole board exercised its legal discretion on April 23, 2019, to restore Golden’s eligibility for parole. He received his first parole hearing five months later, but the hearing examiner recommended he not be granted parole due to his extensive and serious criminal record and institutional infractions while incarcerated.

The parole board granted Golden parole on Jan. 20, 2020, and he was released April 3 after serving 33 years and four months. OSIG determined the parole board failed to provide written notice of Golden’s release to the Roanoke Commonwealth’s Attorney’s Office within the statutory time frame, and did not “endeavor diligently” to contact family members of the victims prior to making any decisions on Golden’s release. In addition, the board did not notify the victims of Golden’s first parole hearing in April 2019, the report said.

In February 2012, Debra Kaye Scribner was sentenced to 23 years and six months for first-degree murder, conspiracy to commit murder and felony use of a firearm in the slaying of her son-in-law, Eric Wynn, and helping her daughter and teenage son dump his body down a well in Halifax County in 2011. Scribner, who was 58 at the time of the killing, first became eligible for geriatric conditional release in November 2018, but the parole board denied it because of “the serious nature of the offenses.”

Scribner received her second geriatric release hearing March 3, 2020, but the hearing examiner recommended she not be granted release for the same reasons stated in 2018 and that she hadn’t served enough time of her sentence. However, the parole board voted to parole Scribner between March 20-30, 2020, and she was released on April 1 after serving eight years and six months. She was 66 years old.

OSIG determined the Halifax Commonwealth’s Attorney’s Office did not receive notification of Scribner’s release until 15 days after she had been set free, and the parole board did not “endeavor diligently” to contact the victim’s family before making any decisions to release Scribner, according to the report.

Execution of wife in front of her two children in Suffolk

In September 1986, Irvian Cotton was sentenced to life plus two years in prison for first-degree murder for killing his estranged wife, Zsa Zsa Sunday Parker Cotton, in front of their two children in Suffolk in 1985. Cotton first became eligible for discretionary parole in October 1998 and for conditional geriatric release in May 2012. At his most recent parole hearing in October 2019, the hearing examiner recommended he not be granted parole due his history of violence, substance abuse, the serious nature of his crimes and being risk to the community.

The parole board denied Cotton discretionary parole Jan. 15, 2020, for the reason that he needed to serve more of his sentence. But the same three parole board members who voted not to grant Cotton parole, voted again for his conditional geriatric release on March 31, 2020, and he was let go April 17 after serving 34 years and four months. He was 67.

The OSIG report includes an email by Bennett, who pushed for Cotton’s release.

“He was recently denied parole,” Bennett said in the March 2020 email to a parole board victim services coordinator. “He is old and has been in prison for over 30 years. I had planned to grant him parole before I left the board....I would like to get him in my queue and get him voted before I’m gone. He will be considered geriatric so he will not be interviewed and a decision will come quick if he makes it.”

OSIG determined the parole board did not follow its procedures for releasing geriatric inmates, failed to provide written notice of Cotton’s release to the Suffolk Commonwealth’s Attorney’s Office within the statutory time frame and did not “endeavor diligently” to contact the victim’s family prior to making its decision to release Cotton, the report said.

In January 1994, Robert Dwayne Godfrey was sentenced to 200 years in prison for first-degree murder and felony use of firearm in the robbery and killing of a 68-year-old Albert Haywood Hamilton Sr. in Grayson County. Later that year, Godfrey escaped from the Grayson Jail while waiting to be transferred to the Department of Corrections. He was convicted of felony escape and received an additional two years and six months in prison. Then in 1996, he was sentenced to a four-year suspended term for bribery and conspiring to bring drugs into prison.

Godfrey first became eligible for parole in 2004 and during his tenth parole hearing in September 2019, the parole examiner recommended he not be paroled due to the serious nature of his crimes, his conviction of new crimes while incarcerated, and his history of violence and substance abuse. The parole board granted him parole on March 29, 2020, and he was released on Aug. 31 after serving 26 years and two months behind bars. He was 51.

OSIG determined the parole board did not “endeavor diligently” to contact the victim’s family before making a decision to grant Godfrey parole, and failed to notify family members of any of Godfrey’s parole hearings so they could provide their input.

Frank Green contributed to this story.

Richmond Times-Dispatch Virginia Parole Board, from left: Chair Tonya Chapman, Vice Chair Linda Bryant, Kemba Smith Pradia, A. Lincoln James and Sherman D. Lee. Bryant submitted her resignation letter on Feb. 27, to be effective March 15, after she was elected by the General Assembly to serve as a judge of Chesapeake General District Court. Her replacement hasn’t bee named.

Former Virginia Parole Board Chair Adrianne Bennett, who left April 16, 2020, after being elected by the General Assembly to serve as judge in Virginia Beach Juvenile and Domestic Relations District Court.