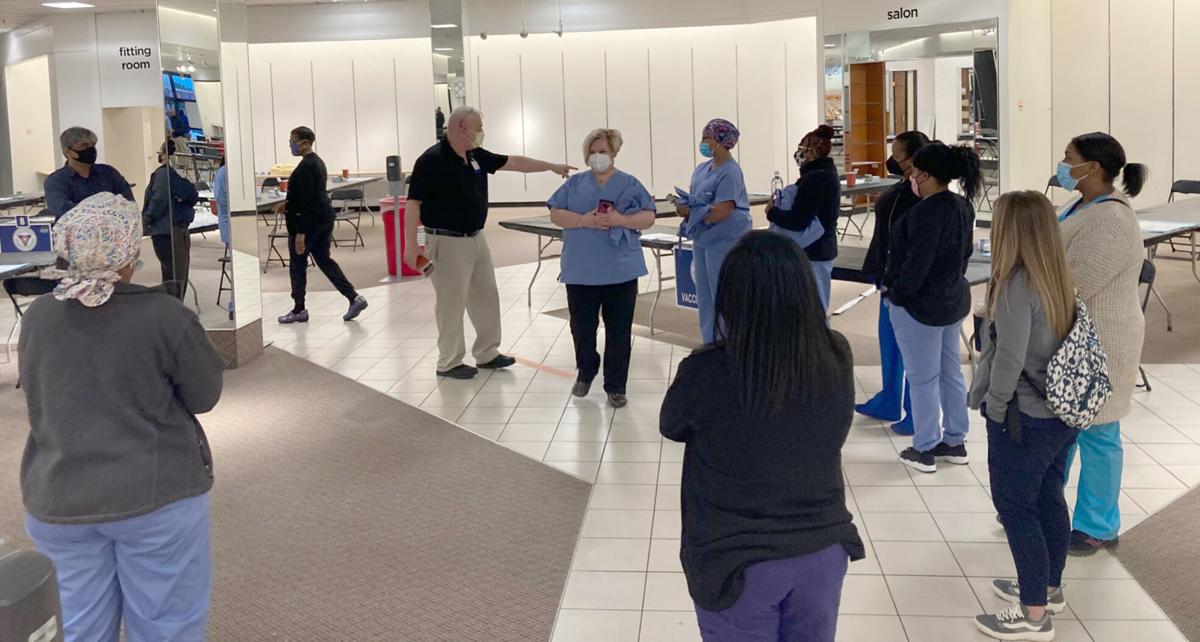 A state official pointed as he gave instructions to workers at the Virginia-run vaccine clinic that started last month at a former J.C. Penney location in Danville, where an attempt to allow walk-ins attracted many out-of-towners. 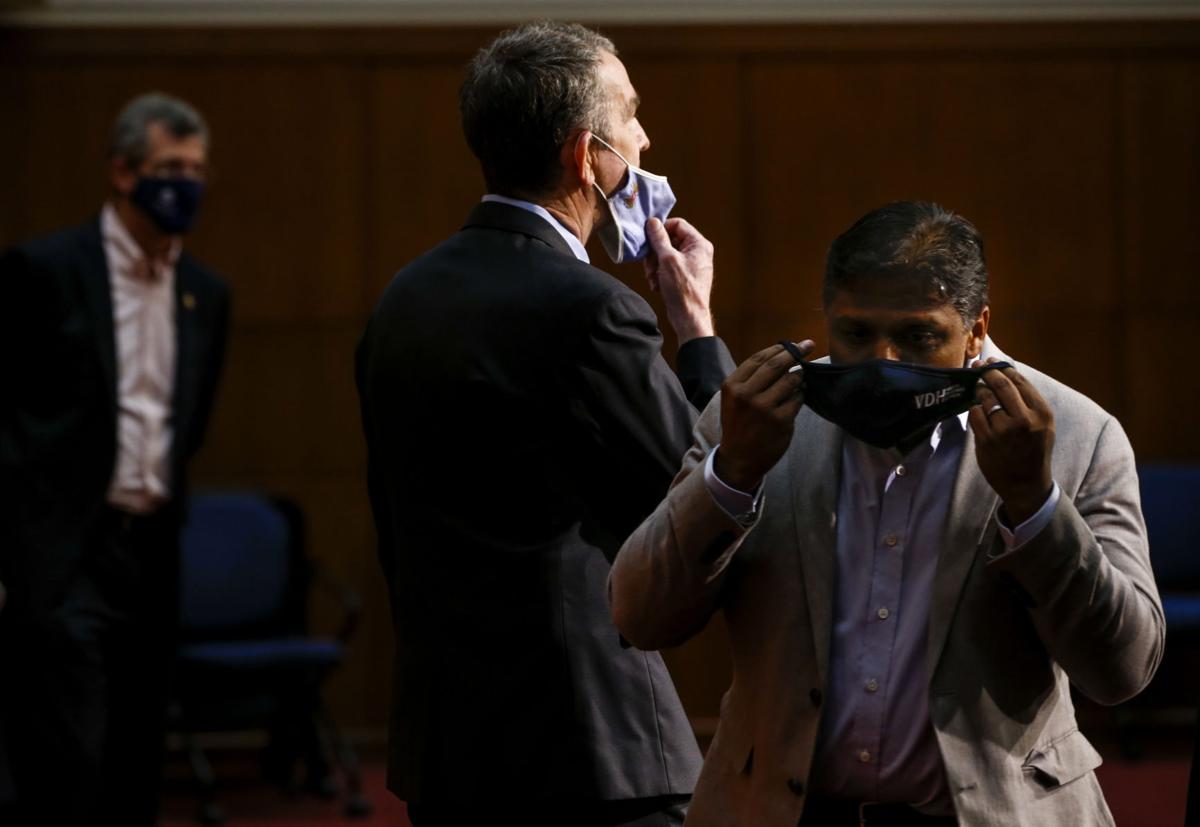 Gov. Ralph Northam approaches the microphone as Dr. Danny Avula, a member of the Virginia Emergency Support Team, makes his way to the line after giving updates on the Commonwealth COVID-19 and vaccination efforts March 23 at the Patrick Henry Building in Richmond.

RICHMOND - Virginia will not be allowing open walk-ins at its vaccination clinics anytime soon to limit the possibilities of out-of-town residents flooding sites outside of their locality.

Dr. Danny Avula, the state’s vaccine coordinator, said in a news conference Friday that previous attempts in Lynchburg and Danville showed doing so only amplified accessibility barriers in low-income areas once people in other health districts found out through social media.

Some reportedly were from other states.

The Virginia Department of Health is floating the idea of requiring proof of residency to minimize the chances of residents traveling hours for a dose and potentially flocking toward predominantly Black or Latino areas and harder-hit neighborhoods with low vaccination rates — an issue clouding every state’s rollout.

But that comes with its own issues.

An advantage would be health districts expanding their resources to scale up vaccinations could be assured those efforts are helping people within the localities and curbing “vaccine tourism.” Ensuring geographic equity could allow for further outreach into communities, Avula added.

A drawback is its potential to worsen accessibility obstacles among people without an address or identification card and undocumented immigrants who could perceive that as requiring “permanent resident status” and risking federal agencies being flagged. Avula said the change also would be an administrative hurdle. No decision has been made yet.

Other states that have required proof of residency are Indiana and Florida, but that didn’t include locality.

Another complicated detail is how the state doesn’t have the ability to control a federal registration system that offers Virginians appointments 50 miles from where they live. Pharmacies, which are vaccinating people through a federal partnership, are out of the state’s control, too.

Avula said Friday pharmacies no longer will pull from Virginia’s pre-registered list to offer appointments and will instead use their own schedulers while abiding by state guidelines. Pharmacies will begin the second phase of vaccinations April 18.

States have equally wrestled with the difficulties of proving eligibility in the pre-registration process, and how that could be another deterrent. Virginia leaders haven’t expressed interest in requiring proof instead of an honor system, but Avula acknowledged people could have been “disingenuous” in signing up.

“We just hope that’s a minority of people and not a majority,” he said.

Variability in which health districts are in what phase has contributed to people traveling toward a locality where they’re eligible, and with no more than a last-minute indication of when a health district is heading into Phase 1c, it’s prompted confusion.

Fairfax and Prince William County, two of the largest health districts in the state carrying a heavy COVID-19 caseload, remain in Phase 1b. They’re among the last to head into the final vaccination stage for essential workers, about two weeks before Gov. Ralph Northam’s promised date where all adults will be eligible for a dose.

“I really just think it’s going to be more and more work on the ground in communities and we need to recognize that that is harder work and it takes more resources,” Avula said. “So that’s what we need to shift to if we’re going to hit those targets.”

Virginians wishing to pre-register for the COVID-19 vaccine can do so in English, Spanish and American Sign Language at vaccinate.virginia.gov. or call (877) VAX-IN-VA to sign up over the phone.

Biden: This is the decisive decade on climate

Biden: This is the decisive decade on climate

This widow kept better records than the Virginia Parole Board. Her family thinks it stopped a killer from going free.

LYNCHBURG — When she’s doing anything, like driving around town or alone with her thoughts, Judy Smith thinks of the night she saw her husband die.

William & Mary mistakenly tells 350 applicants they had been accepted

William & Mary accidentally sent an email to 350 applicants who had been denied or waitlisted congratulating them on their acceptance.

On the eve of the anniversary of the worst mass shooting in Virginia history, Sens. Tim Kaine and Mark Warner, both Virginia Democrats, are asking Congress to follow the state's lead in enacting restrictions on purchase and use of firearms.

The pageant left three years ago for Liberty University in Lynchburg, which hosted it for two years. It was canceled last year, due to COVID-19. Miss Virginia had spent its first 54 years in Roanoke before pageant officials, through a third party, notified the city that it was leaving.

“This student asked a series of questions that were quite antagonistic toward the panel. He pressed on and stated one faculty member was being contradictory. ..."

The James River Water Authority this week will start the process of evaluating an alternative site for a water intake station that had been planned for Point of Fork, the location of Rassawek, the historic capitol of the Monacan Nation.

Former Gov. Terry McAuliffe, who is running for a second term, raised $4.2 million in the first quarter of 2021, more than all of his Democratic rivals combined — displaying the kind of influence that makes him the candidate to beat in the Democratic primary.

The second in command of the Norfolk Police Department’s internal affairs unit has been fired after he made what the city manager called “egregious” comments praising Kyle Rittenhouse, the white man accused of shooting and killing protestors last year. Those comments violated departmental policies and “erode the trust between the Norfolk Police Department and those they are sworn to serve,” ...

A state official pointed as he gave instructions to workers at the Virginia-run vaccine clinic that started last month at a former J.C. Penney location in Danville, where an attempt to allow walk-ins attracted many out-of-towners.

Gov. Ralph Northam approaches the microphone as Dr. Danny Avula, a member of the Virginia Emergency Support Team, makes his way to the line after giving updates on the Commonwealth COVID-19 and vaccination efforts March 23 at the Patrick Henry Building in Richmond. 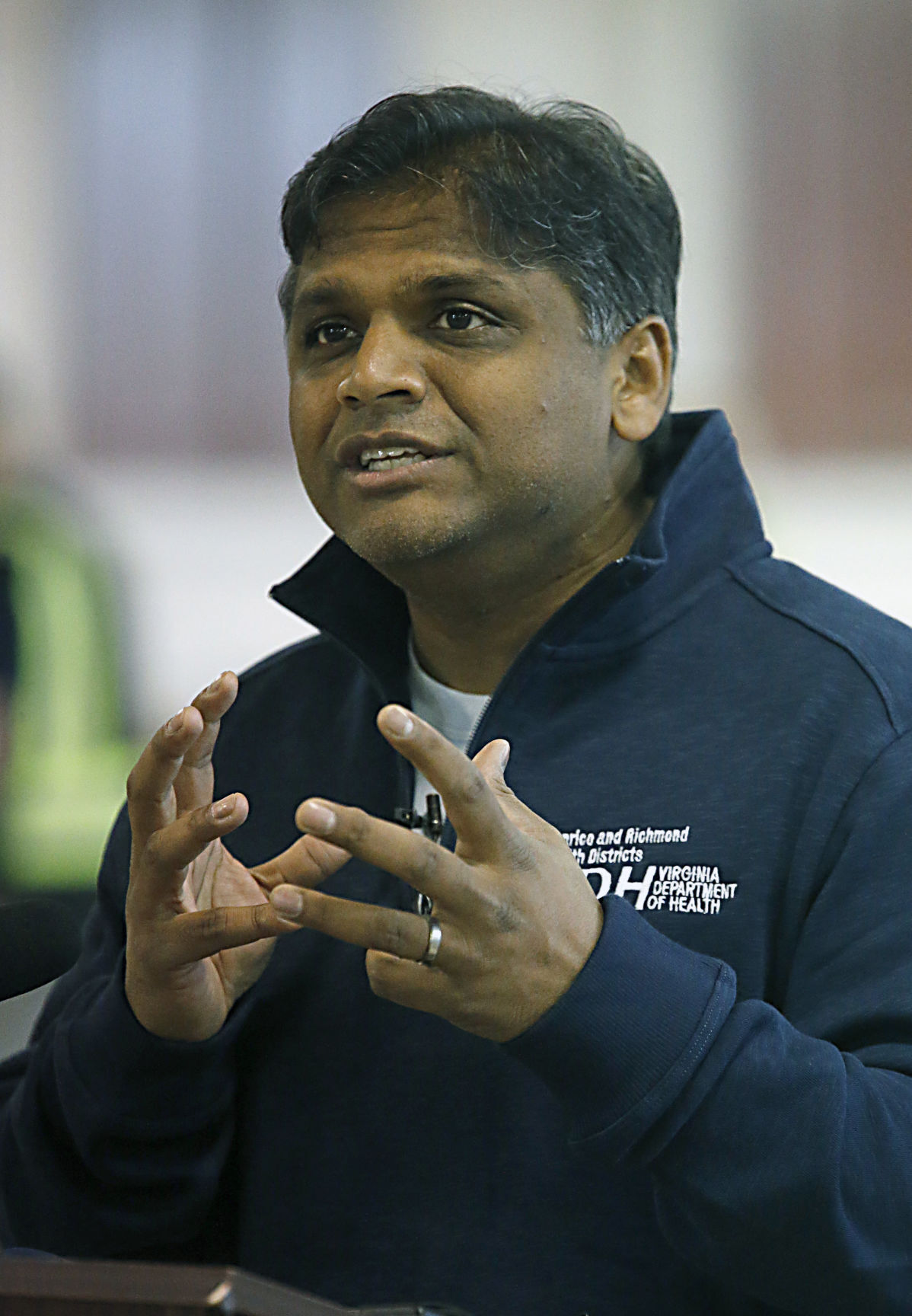