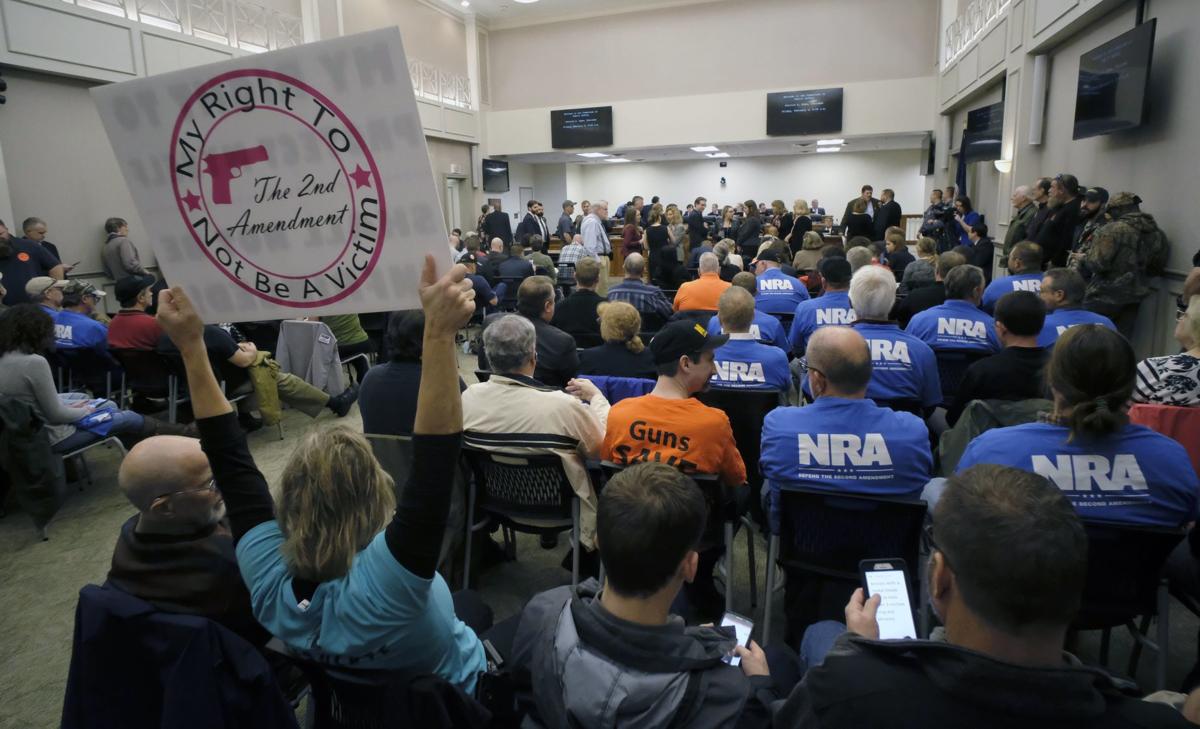 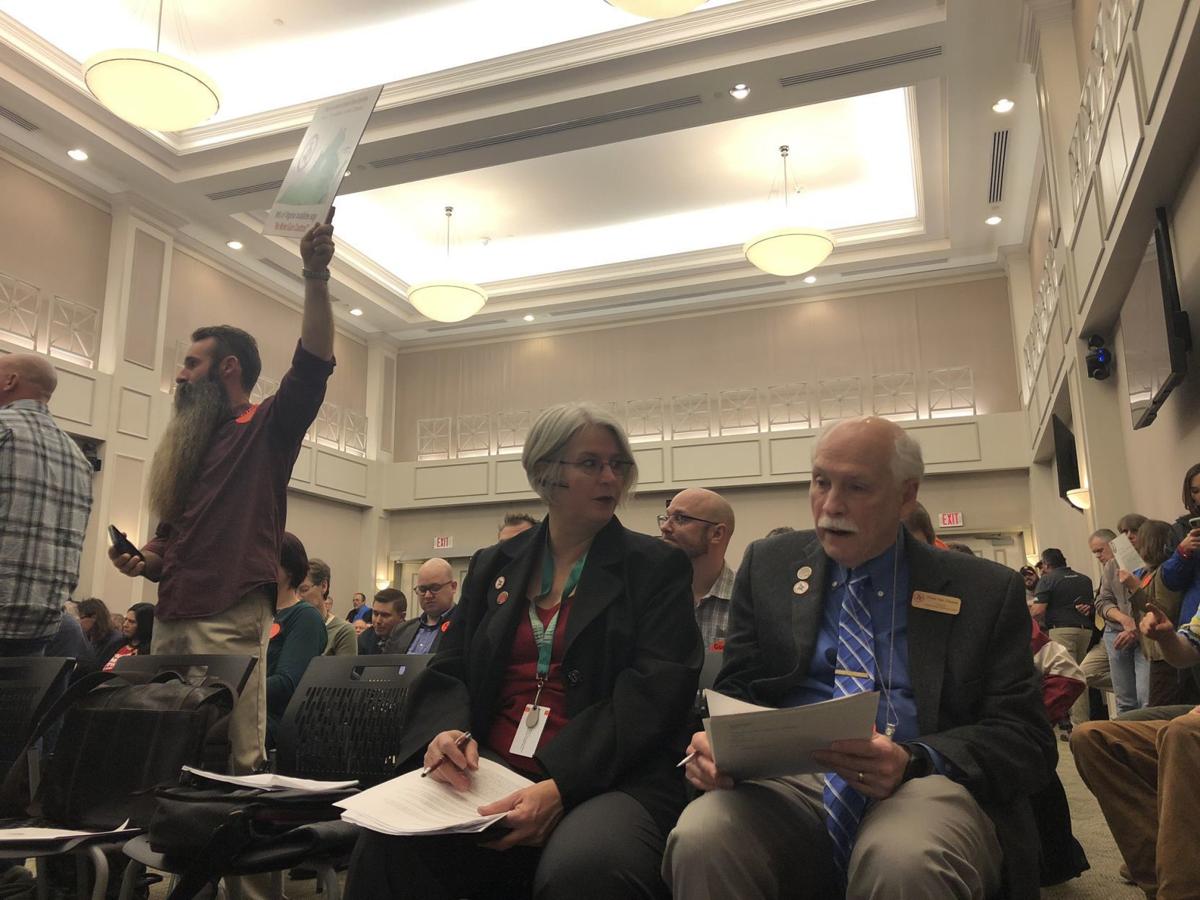 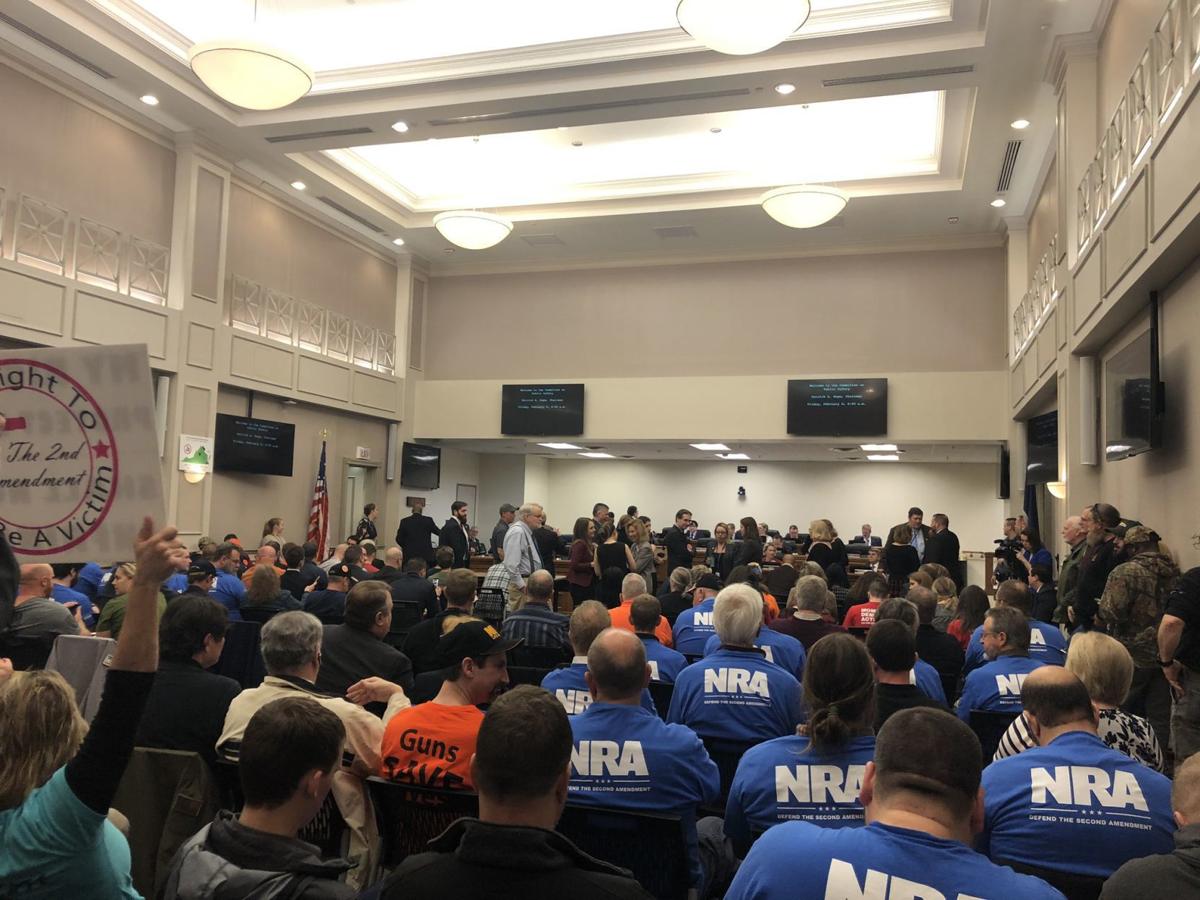 Del. Mark Levine, D-Alexandria, prepares to present HB 961, his measure to ban the sale of assault weapons, to a standing-room-only meeting of the House Public Safety Committee on Friday inside the Pocahontas Building in Richmond.

After presenting HB 961, his measure to ban assault weapons, to a standing-room-only meeting of the House Public Safety Committee, Del. Mark Levine, D-Alexandria, stands before members of the audience raising their hands in opposition to it. 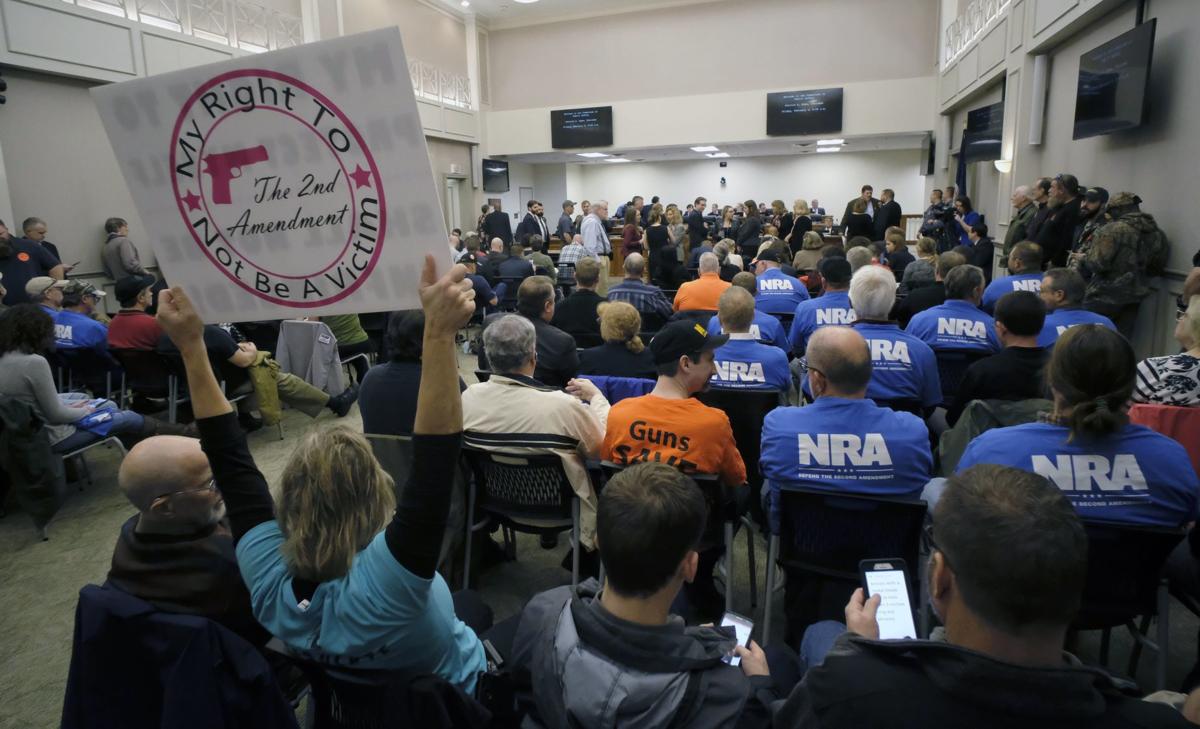 Gun-rights supporters sit inside the room where Del. Mark Levine, D-Alexandria, presented HB 961, his proposed assault weapons ban, in Richmond on Friday. Most people in the room opposed the bill, which later passed.

RICHMOND — House Democrats used their majority Friday to advance the most controversial gun control bill this General Assembly session, a ban on the sale of assault weapons and the possession of “high capacity” magazines of 12 or more rounds.

The House Public Safety Committee backed HB 961 on a 12-9 party-line vote, sending it to the floor of the House of Delegates. The bill would, among other things, require Virginians to turn over or destroy ammunition magazines considered to be “high capacity” and allow the possession of centerfire assault rifles but prohibit the transfer or sale of them in most situations.

“This is the bill,” NRA lobbyist D.J. Spiker told the committee. “This is the one that’s fired up Virginians.”

The bill from Del. Mark Levine, D-Alexandria, underwent a significant revision from the original proposal that called for expanding the definition of assault weapons and making it a Class 6 felony to import, sell, buy, transfer or build them within the state. Levine said he took input from various stakeholders to offer a less restrictive bill.

The legislation inflamed gun rights advocates across the commonwealth and invigorated a movement for localities to identify themselves as Second Amendment sanctuaries.

Throughout the discussion of the bill, gun owners cheered at the remarks from Republicans and jeered at comments from gun control advocates. When the bill passed, gun owners stood up and shouted “We will not comply!” Del. Patrick Hope, D-Arlington, the committee chairman, directed law enforcement to clear the room.

“Whose side are you on?” people shouted to law enforcement officers when they told people to leave.

Del. Nick Rush, R-Montgomery, stood up and tried to speak over the shouting, telling the crowd the officers were just doing their job.

Under the revised legislation, people will be able to keep their assault weapons, but it will be illegal to import, sell, transfer or manufacture any assault firearms. There are some exceptions for transfers, such as if it happens at a shooting range for the purpose of target shooting, or as gifts to immediate family members or via wills or estates. The bill also would ban the import, sale or transfer of silencers.

The current version of the bill aligns more with the growing research that suggests it is the magazine capacity that may increase the death toll because shooters can fire more rounds before they are stopped. Data shows that when magazines are regulated, they’re used less often in crimes. Virginia has no limits on magazine capacity, with exceptions that ban carrying certain loaded high-capacity firearms in public in eight specific, heavily populated cities and five counties.

In an impassioned speech to the committee, Public Safety Secretary Brian Moran invoked the April 2007 Virginia Tech massacre. The shooter killed 32 people and wounded 17 with handguns equipped with high-capacity magazines, enabling him to commit one of the worst mass shootings in U.S. history before killing himself.

Moran spoke about Professor Liviu Librescu blocking a classroom door so his students could jump out of the second-story window. The shooter forced his way in and shot and killed Librescu with a semi-automatic pistol.

“When seconds matter, they could escape through that window. Reloading that magazine mattered,” Moran said. “That’s why we’re here. Just like those students, just like the theatergoers in Aurora, just like the schoolchildren in Newtown, the concertgoers, the nightclub goers in Orlando Florida. Time and again, this is too often.”

In Newtown, Connecticut, the shooter fired 154 rounds from an assault rifle with multiple high-capacity magazines and in less than five minutes killed 20 first-graders and six teachers.

Lori Haas said she’s met a mother whose child died at Sandy Hook Elementary and carries the weight of her daughter surviving being shot at Virginia Tech.

“You don’t want to know what I know,” Haas said. “Don’t let it happen again.”

Del. Tony Wilt, R-Rockingham, said the mass shooting at Virginia Tech was a tragedy, but he said it happened at a gun-free zone.

“These are basically killing grounds,” he said to applause from the crowd. “We cannot legislate morality. We cannot stop evil.”

The United States had a federal ban on new production — but not ownership — of assault-style rifles between 1994 to 2004. Research is limited and inconclusive about how effective the ban was on reducing gun violence.

Currently, seven states and the District of Columbia have their own assault weapons bans, some of which go further than the federal law did.

Former Republican Congressman Tom Garrett, who also formerly served in the General Assembly, addressed the committee, warning members that the votes may exist on the U.S. Supreme Court to strike down gun restrictions.

“Instead of banning weapons you’re so intimidated of because you fail to understand them, you’ll ensure the ability of Americans to possess them from heretofore,” Garrett said.

The House has sent all eight gun control bills that have the backing of the Northam administration to the floor. Not all of the bills the House and Senate have passed are exactly the same, so it’s unknown which ones could ultimately get to the governor’s desk. Senate Majority Leader Dick Saslaw, D-Fairfax, introduced an assault weapons ban bill, but then scrapped it from being considered.

The committee also advanced a few other gun control bills to the floor, including removing the option to take an online course to obtain a concealed carry permit.

“These bills will save lives, and that’s why we feel strongly about it,” Hope said.

Gov. Ralph Northam signed a historic batch of gun control bills Friday, marking a major victory for Democrats who made curbing gun violence a top priority with their new majorities.

RICHMOND — The Senate Judiciary Committee on Monday halted for the year a highly controversial bill to ban the sale or transfer of assault weapons and the possession of “high capacity” magazines of 12 or more rounds.

Del. Mark Levine, D-Alexandria, prepares to present HB 961, his measure to ban the sale of assault weapons, to a standing-room-only meeting of the House Public Safety Committee on Friday inside the Pocahontas Building in Richmond.

After presenting HB 961, his measure to ban assault weapons, to a standing-room-only meeting of the House Public Safety Committee, Del. Mark Levine, D-Alexandria, stands before members of the audience raising their hands in opposition to it.

Gun-rights supporters sit inside the room where Del. Mark Levine, D-Alexandria, presented HB 961, his proposed assault weapons ban, in Richmond on Friday. Most people in the room opposed the bill, which later passed.