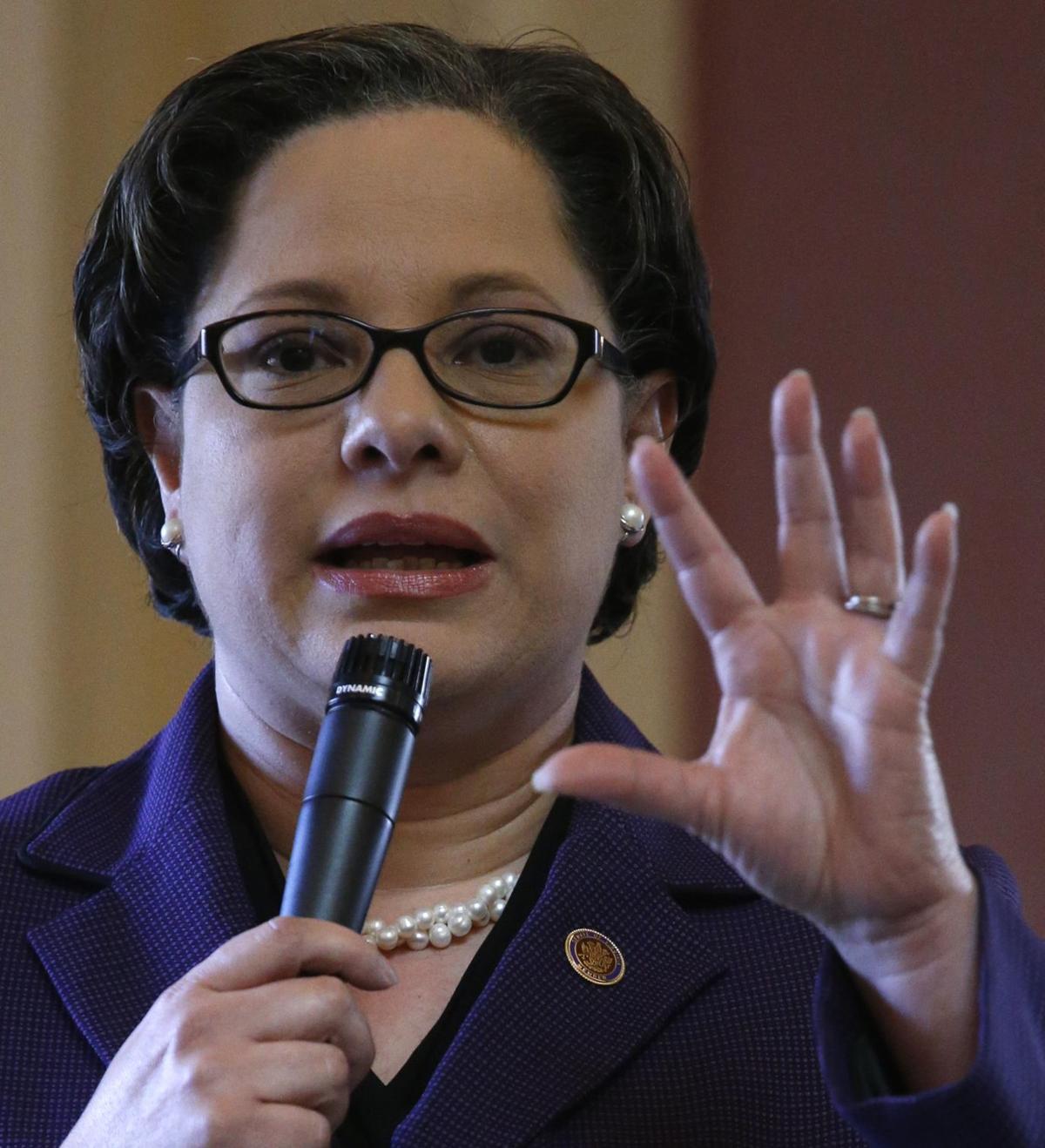 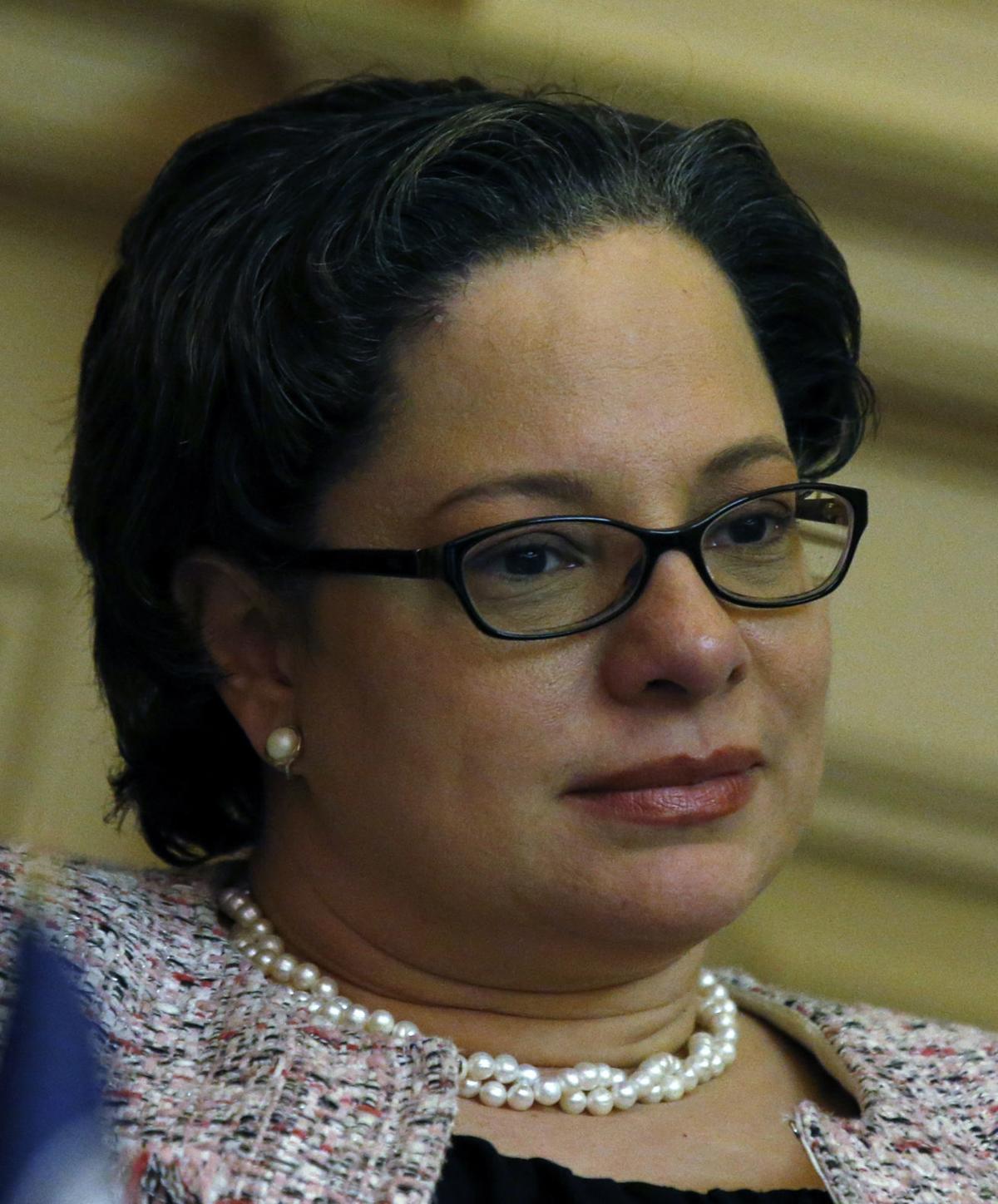 Sen. Jennifer McClellan, D-Richmond, at her desk in the Senate inside the Virginia state Capitol in Richmond, March 7. 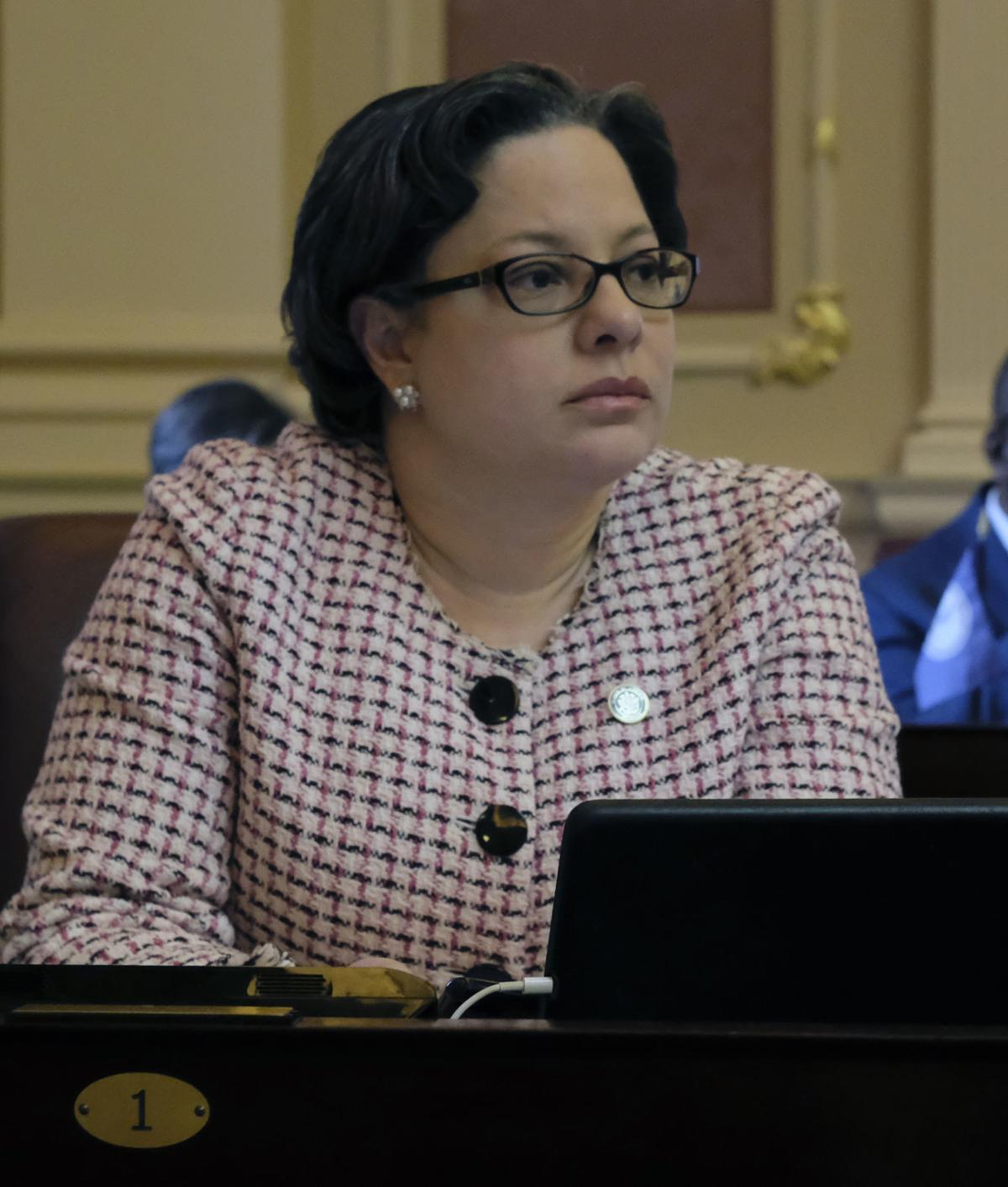 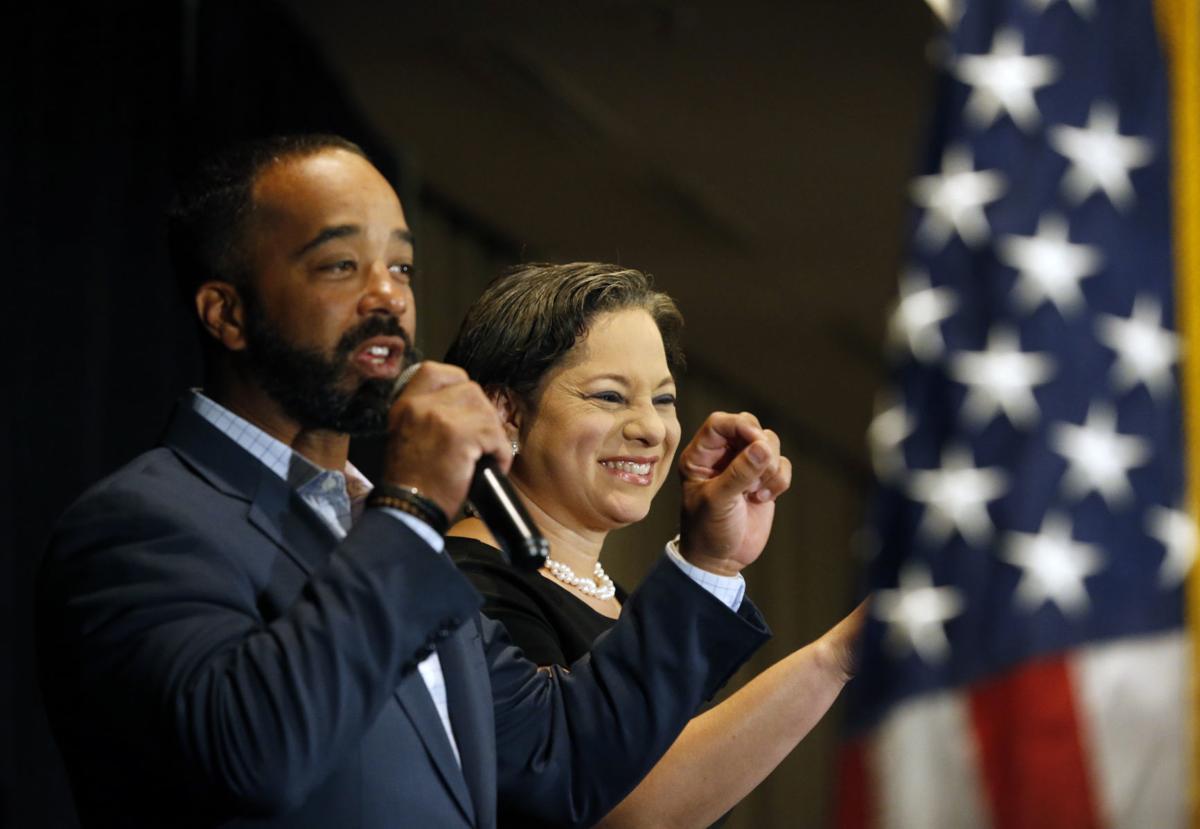 Del. Jeff Bourne, D-Richmond, and Sen. Jennifer McClellan, D-Richmond addressed the Democratic election night watch party inside the Hilton Richmond Downtown in Richmond, Nov. 5, 2019. Bourne says McClellan has a "keen awareness of how government works, but more importantly how government can work and should work for everyone."

Sen. Jennifer McClellan, D-Richmond, promised no "retreat to the past" as she declared her candidacy Thursday for the Democratic nomination to become the next governor of Virginia.

McClellan would be the first woman, as well as the second African American, elected to the state's highest office.

McClellan has represented the Richmond area in the General Assembly for 15 years, but she said "there's no playbook" as she launched her campaign amid public unrest over police treatment of African Americans and an ongoing health crisis that has crippled Virginia's economy.

"I know that this is not a moment to retreat to the past, but to step boldly into the future," she said in a video announcing her campaign. "We must rebuild our economy stronger, more inclusive, without leaving people behind."

Sen. Amanda Chase, R-Chesterfield, has announced she will seek the GOP nomination. Entrepreneur Pete Snyder, who sought the 2013 Republican nomination for lieutenant governor, is considering a run.

McClellan, a 47-year-old corporate lawyer, says her candidacy is about creating a better future for Virginians, not about her gender or race. "I'm not running to be the first African American woman governor of Virginia," she said in an interview.

"A lot of people will focus on the uniqueness of my candidacy," she said, "but these are unique times."

More than three months of tumult began with Gov. Ralph Northam's declaration of a public health emergency on March 12 that included a near shutdown of the state economy and public life in response. Now more than two weeks of intense street demonstrations over police treatment of blacks following the death of George Floyd in Minneapolis have toppled monuments to Virginia's Confederate - and Jim Crow - past.

Recovery doesn't mean retreat, McClellan said. "Our message can't be we want to go back to where we were on March 12, because that wasn't good enough."

She added: "We need to address systematic inequality going forward and rebuild in a way that does that."

"She has an understanding and keen awareness of how government works, but more importantly how government can work and should work for everyone," said Bourne, one of 15 elected officials and public figures who have endorsed her, including Sen. Ghazala Hashmi, D-Chesterfield; Del. Rodney Willett, D-Henrico; and Hanover County Supervisor Faye Prichard.

Bourne, who also is African American, thinks McClellan  has the right temperament to help bind the racial wounds opened by Floyd's death in police custody last month and the sometimes violent demonstrations that have followed.

McClellan is well-regarded as a prolific public policymaker and orator, but she said her primary goal is to listen to Virginians who "feel unheard" as they ask government to help them with jobs, education, health care and safe communities.

"You can't separate public safety, education, the economy and health care," she said. "You have to look at all of them together."

Her legislative record in the most recent General Assembly session encompasses work on energy policy to address climate change, raising the minimum wage and extending it to domestic workers, establishing a state-run health insurance exchange, preventing housing discrimination, protecting women's right to abortion and reproductive health care, requiring people to report the loss or theft of firearms, establishing standards for political redistricting, and creating a commission on modernization of public schools, to which she was appointed this week.

Vice chairwoman of the Virginia Black Legislative Caucus, McClellan sponsored legislation to repeal vestiges of state laws that enshrined racial segregation. She also was reappointed this week to the Dr. Martin Luther King Jr. Memorial Commission, which she leads, and the Task Force on Preservation of the History of Former Enslaved African Americans.

Her family history is rooted in education and the struggle of African Americans for civil rights. Her paternal great-grandfather was an emancipated slave and her grandfather was a civil rights attorney in Nashville, Tenn., who helped to defend protesters who staged sit-ins at the city's downtown lunch counters in 1960.

McClellan's mother, Lois Dedeaux McClellan, was the third of 14 children who grew up on Mississippi's Gulf Coast and the first to graduate from high school and college. Her late father, James F. McClellan Jr., was an educator who worked as a professor of guidance and director of testing at Virginia State University, a historically black institution in Ettrick in southern Chesterfield County.

He also was an ordained minister who was pastor of Westminster Presbyterian Church in Petersburg, where McClellan was born in 1972.

She grew up in southern Chesterfield and graduated from Matoaca High School, earned her bachelor's degree from the University of Richmond and law degree at the University of Virginia. After a stint at Hunton & Williams law firm, now known as Hunton Andrews Kurth, she joined Verizon, a telecommunications giant that includes Virginia's largest telephone company.

McClellan was first elected to the House of Delegates in 2006 and served until 2017, when she was elected to the Senate to succeed U.S. Rep. Donald McEachin, D-4th.

She has long been eyed as a likely Democratic candidate for statewide office, but she has juggled her corporate job with the seasonal demands of the legislature and being a mother to two young children. She is married to David Mills, former executive director of the state Democratic Party.

McClellan was not coy about her political ambitions in an interview with the Richmond Times-Dispatch in late 2016 before her election to the Senate.

“I say this as a joke, but it’s also true,” she said then. “Any Virginia politician who tells you they don’t want to be governor is a liar.”

McClellan faces a  campaign like no other because of the constraints of social distancing and avoiding crowds to prevent the spread of COVID-19, which has infected almost 56,000 Virginians and killed almost 1,600.

Her challenge is to find multiple ways to "meet people where they are," but she said her campaign will rely on "good old grassroots organizing."

"I've always been a good listener."

Cast in bronze astride a horse, the statue of Confederate Gen. Thomas “Stonewall” Jackson had towered over Monument Avenue for a century.

Sen. Jennifer McClellan, D-Richmond, at her desk in the Senate inside the Virginia state Capitol in Richmond, March 7.

Del. Jeff Bourne, D-Richmond, and Sen. Jennifer McClellan, D-Richmond addressed the Democratic election night watch party inside the Hilton Richmond Downtown in Richmond, Nov. 5, 2019. Bourne says McClellan has a "keen awareness of how government works, but more importantly how government can work and should work for everyone."