Jonah Goldberg: Afghanistan withdrawal shows allies that US isn’t a reliable partner
0 Comments
Share this
1 of 2 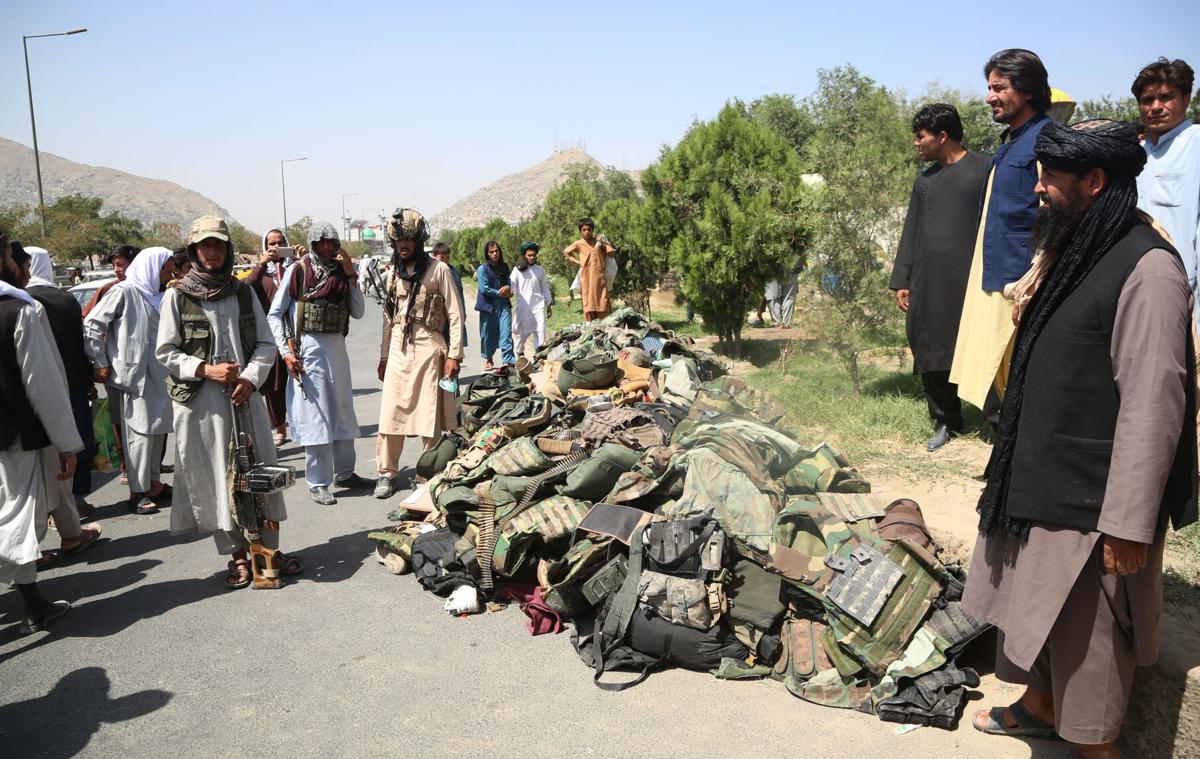 Taliban fighters stand beside the belongings, such as body armor and ammunition, of Afghan security soldiers Aug. 16 in Kabul, the capital of Afghanistan.

When Joe Biden came into office, we were told that the “adults are back in charge” because he immediately set to work undoing as much of Donald Trump’s legacy as he could.

“The new president in his first week issued more than three dozen executive actions on a wide range of issues,” reported U.S. News & World Report. “And virtually all of them reverse or stop actions taken by Donald Trump.”

From immigration to health care, the adults began cleaning up the mess left for them. Biden rejoined the Paris climate accord and made plans to restore the Iran nuclear deal.

But on Afghanistan, the president’s hands were tied. On Saturday and again on Monday, Biden insisted that he “inherited” Trump’s deal and his hands were tied. But, wanting it both ways, he also said he agreed with the policy that was forced on him.

It’s true, Trump’s disastrous deal with the Taliban would have had us withdraw by May 1, but because Biden was such a grown-up, he extended the deadline to Sept. 11 — the 20-year anniversary of the attack that set this war in motion. In messaging terms, it was singularly the most idiotic date Biden could pick. But he justified the extension to ensure that, “We will not conduct a hasty rush to the exit. We’ll do it — we’ll do it responsibly, deliberately and safely.”

On Sunday, CNN’s Jake Tapper asked Secretary of State Antony Blinken what to make of the fact that the spectacle in Afghanistan didn’t look particularly responsible, deliberate or safe. Blinken’s response: “I think it shows that we were prepared. The president was prepared for every contingency as this moved forward.”

But Blinken also admitted, “The fact of the matter is, we’ve seen that that force has been unable to defend the country, and that has happened more quickly than we anticipated.”

On Monday, Biden confirmed that he was taken by surprise by the rapidity of the Afghan government’s collapse but said it was because the Afghans were “unwilling” to fight. He made the obligatory “the buck stops with me” nod but also insisted the calamity was the fault of the Afghan army, which was trained and organized to depend on U.S. support.

You’d think adults would have understood this and planned accordingly. The collapse of the Afghan government wasn’t inevitable until we made it inevitable.

When I say “we,” I mean the entirety of the U.S. government and the foreign policy establishment. The military should have understood that immediately cutting off support would cripple the Afghan military. Knowing this, someone should have threatened to resign as a way to forestall this calamity.

This was Biden’s decision, and he deserves all of the scorn he gets for it, but that doesn’t change the fact that the Trump administration made this choice easy for him. If Trump had his druthers, we would have left even earlier, and the Taliban’s takeover would be just as assured. (Trump himself congratulated Biden’s “wonderful” decision to withdraw.) It may not have happened as quickly, but the strategic goal was the same: abandon the Afghans the same way Trump abandoned the Kurds.

Perhaps what’s most infuriating about this debacle is how its defenders, on both the left and right, cling to the idea that they’re the sober realists. We should only go to war when it’s in our narrow, vital self-interest, they thunder, forgetting that we invaded Afghanistan in the first place for precisely such reasons, with the most bipartisan support for use of force since we declared war on Japan.

The Biden administration justified our withdrawal on the grounds that we need to switch to more serious geopolitical rivalries, as with China. Maybe we do. But doing so didn’t require pulling a few thousand troops and contractors from Afghanistan. More importantly, does anyone truly believe that this self-inflicted blow to our national honor will improve our standing in the world? The signal sent to Taiwan — and China — is that we can’t be counted on.

That message, heard around the world, is an unforced strategic blunder. It’s also a moral one.

Biden made “America is back” the unofficial slogan of his presidency. Imagine how that phrase sounds to the Afghans swarming the Kabul airport. Or how it would have sounded to the poor souls who clung to the outside of a transport plane before they plummeted to their deaths? Or how hollow it sounds to the millions of Afghan girls facing forced marriages to Taliban fighters?

If this is how adults behave, let’s give some children a shot.

Taliban fighters stand beside the belongings, such as body armor and ammunition, of Afghan security soldiers Aug. 16 in Kabul, the capital of Afghanistan.